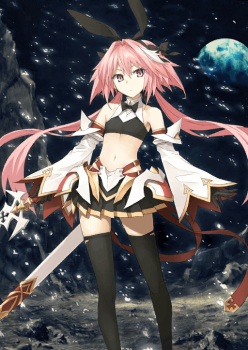 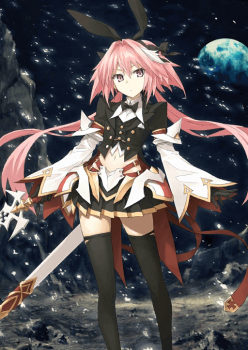 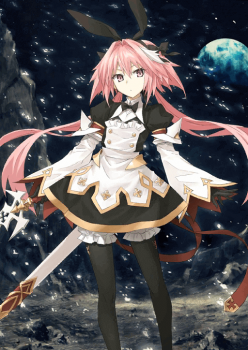 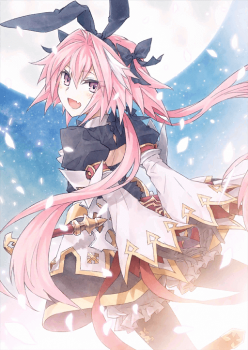 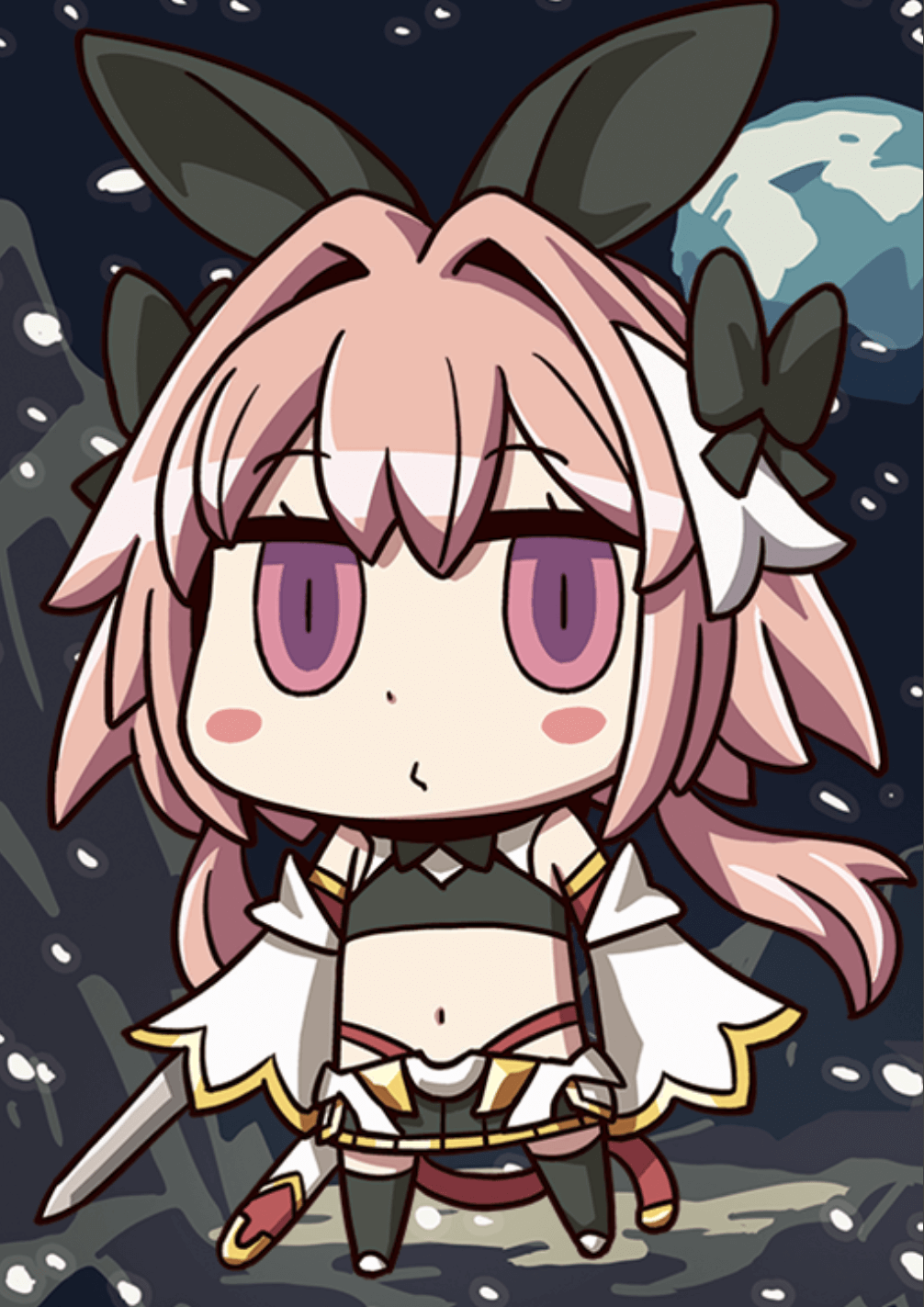 Self NP Regen Self Debuff Clear

Gain NP Gauge each turn for yourself (3 turns).
Remove own Debuffs.

Declaration of Destruction (Strong) B+

Apply Terror to all enemies (3 turns) - chance to inflict Stun at the end of each turn; debuff removed when Stun succeeds.
Apply Evade to self (3 times, 3 turns).

Leaving Behind the Sword for a Moment

When equipped on Astolfo (Saber),
Increases own NP Damage by 30%. Increases own Critical Damage of Buster Cards by 100% for 3 turns

After years of clamoring for a true bunny girl, the Fate Gods answer and gave us… Astolfo. As a Single Target Quick Saber Servant, Astolfo serves to blow up their enemies in a quick and efficient manner. They’re best served on teams looking for a high-HP boss killer.

As a Single Target damage dealer, Astolfo’s main goal is to kill enemies, and they do so with effective ease. They have one of the highest single target bursts of all characters with Riding A’s passive combined with an Attack boost on Majestic Triumphant Return EX and an overcharge on their Noble Phantasm which buffs their Quick attacks before doing damage. A combination of their La Black Luna C’s evasions and Declaration of Destruction C’s debuff cleanse also makes them quite durable against incoming damage. What really makes them shine is Declaration of Destruction’s charging skill, which allows them to use better CEs than their competition and hence do more damage.

While cute as a bunny girl, Astolfo as a Saber has some pretty severe weaknesses. For one, they have poor self-synergy, such as having a skill which boosts Critical Star Gather for their Buster cards when they only have one. They also have an RNG skill in La Black Luna. Their NP gain is also a little lackluster, having poor hit counts on their Quick cards.

All in all, Astolfo serves as a rather vanilla damage dealer and could be a good addition to a team lacking a single target Saber. They work well for larger HP final bosses, and also provide some measure of utility for challenge quests with their debuff clear, stun, and NP Seal capabilities. As a plus, they’re a bunny girl. But for those waiting for a true bunny girl, you’ll have to wait for Scathach’s costume.

Unlike Astolfo’s most comparable counterpart in Okita Souji, Astolfo has access to a 20% per turn charge. This skill not only allows quick access to Noble Phantasms, but also to use more efficient CEs for less cost. For instance, with a Skadi and a Mage’s Association Mystic Code, Astolfo could fire off a Noble Phantasm turn 3 with a Black Grail CE, without considering any other sources of NP charge.

Astolfo has high damage thanks to their attack up skill and Quick up overcharge. Combined with Quick typing which allows external Skadi support, they can really pack a punch with their hits. Unfortunately, this is burst damage as their lack of an effective gather skill or star creation skill until their interlude makes them a less-than-optimal sustain. Although they have a Buster Card Star Gather skill, their card set only has a single Buster card, which in practice makes it less likely to be applicable.

Astolfo really makes sure they don’t get hit. Their 3-hit 3-turn evasion skill acts as a stronger-than-usual hard counter against damage, and even if they avoid it for a turn they still have it on for the next. They also have Terror on skill 2, which gives a chance of avoiding all damage from an enemy for a turn via Stun, as well as a Debuff cleanse on skill 1 to take care of any debuff-related problems. To add to these, whenever they use their Noble Phantasm, its NP Seal effect ensures the enemy cannot counter with a Noble Phantasm of their own.

Astolfo’s skills are all over the place. Some boost Noble Phantasm gauge and attack, and others boost Critical performance, but they typically do not work together making Astolfo (Saber) a Jack of all trades and master of none. Most notably is how they have a skill to boost Criticals and gather stars to their Buster card, yet they only have a single Buster card. Astolfo also unfortunately cannot guarantee stars on a turn until after their skill upgrade.

Terror is one of the worst debuffs in the game as it is only a chance of happening each turn and never occurs the first turn it is used. The chance at maximum level is only 40%, so Masters relying on it to succeed will often be disappointed, and it may  fail to proc at the worst possible time.

While Astolfo’s Noble Phantasm and charge skills give fairly good regeneration, their cards are not particularly impressive with respect to NP Gain. Their two Arts cards are standard and their Quick card has low hit counts, which further contributes to their mediocre card NP Gain.

A Master looking to make the best use of Astolfo will attempt to improve their Noble Phantasm’s damage as much as possible, given that their NP is arguably one of the greatest assets Astolfo offers over other competition in the ST Saber roster. Their skill selections should be based solely upon how hard the Noble Phantasm hits as well as how fast they can use it with as minimal effort as required.

Thanks to Astolfo’s first skill, they should mainly try to concentrate on damage via NP Damage Up CEs. Lacking that, a Mixed Damage / Starting Gauge CE will give them quick and easy access to their Noble Phantasm on the usually boss-containing turn 3. Masters may wish to give them a Starting NP Gauge CE to give them earlier access to their NP, but these typically are worse options than Mixed CEs for a charger like Astolfo.

Could it be...? Impossible...! A Saber Astolfo!? There is absolutely no rhyme or reason to any of this, but it seems he's manifested as the class touted to be the very best..
Yeah! See that? Woohoo!

Astolfo technically has the right to manifest as a Saber since they were a member of the Twelve Paladins of Charlemagne. But since Astolfo was considered to be one of the weakest amongst the knights, it appears there weren't many people eccentric enough to want to summon Astolfo even as a treasured Saber.

Astolfo's alignment remains Chaotic-Good, so if you really think about it, it's still the same Astolfo, just carrying a sword. While at essence a Rider, Astolfo has abilities that are slightly improved due to wielding a sword.

As a Saber, Astolfo's knightliness seems to have increased, which allows for about a five percent increase in politeness and sanity retention for about five seconds longer. It also means bowing five degrees lower and gripping your hand five times firmer when shaking it as well.

The Lucky Capturing Net.
A net that is said to have the ability to capture even gods, set by the giant Caligorante. At least that was what it was supposed to be, but Caligorante hears the trumpet of Astolfo's magical horn and flees in fear, ironically falling into his own net.

After far too many complications to note here, the net was reforged into a sword when Astolfo became a Saber. The blade is also known as a whip-sword or a chain-linked sword, which is the dream of all warriors.

Irrational Idol Going Berserk.
A sealed secondary Noble Phantasm. This Noble Phantasm can call upon Hippogriff's power when summoned as a Rider. It's everywhere yet nowhere, and its imaginary existence confuses the enemy. In this particular case, Astolfo not only creates many clones, but also creates uncertainty about whether they are truly there or not, enabling a form of evasion. Making matters worse, after enough time passes, the Astolfo clones multiply exponentially, leaving almost a hundred Astolfos running amok...

The idea of a hundred Astolfos chanting and screaming as if at a concert is, to some Servants, a nightmare.

It all started during the 2021 Christmas event. After Astolfo took the wish-granting device, the Holy Grail (bell), from Nightingale, their subconscious desire to become a Saber was inadvertently granted.

But once Nightingale obtained the Holy Grail, Astolfo lost the power of a Saber. Feeling sorry for Astolfo, Nightingale turned them back to a Saber, and thus Astolfo Saber was officially born. Perhaps not surprisingly, the first thing Astolfo wanted to do the moment they turned back into a Saber was to shout the following to Master:

They really wanted to say that with their head held high as a Saber. Yeah...that's pretty much their entire motivation for becoming a Saber in the first place.