Community Posts with Keyword Avicebron All 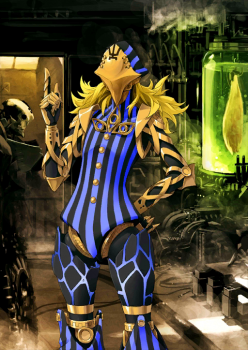 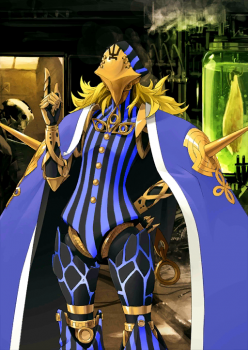 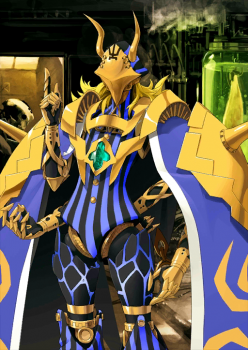 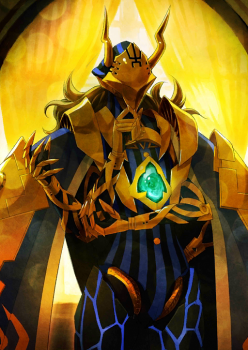 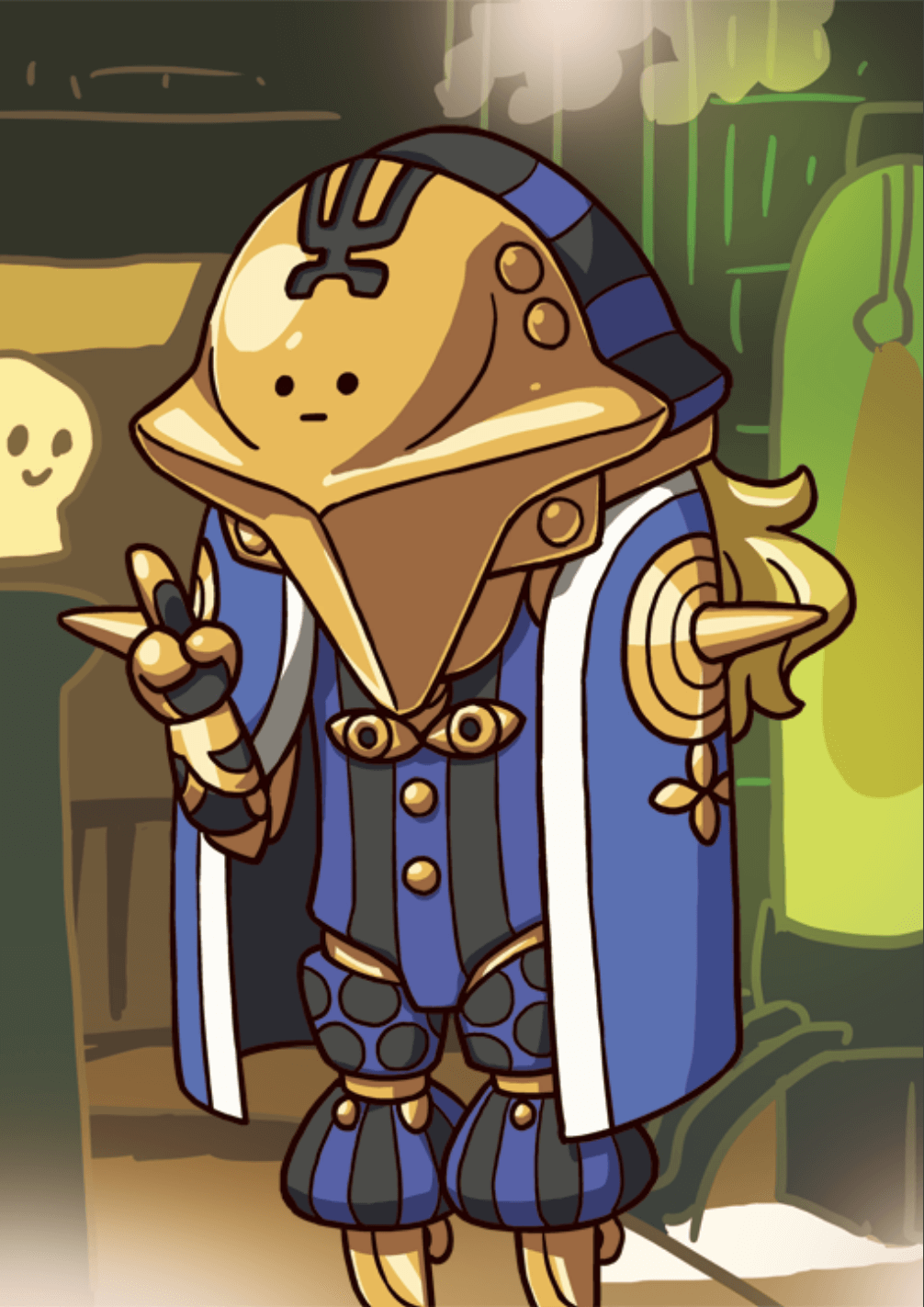 Grants self On-Death buff (5 turns).
(The effects of the buff triggers when the Servant is defeated.)
When defeated, apply Invincible to all allies (2 times, 3 turns). (3 times at skill level 10.)
When defeated, recovers party's HP.

Increase your Debuff Chance Rate by 9%.

Royal Crown, the Light of Wisdom

Royal Crown, the Light of Wisdom

A Certain Truth and Death

When equipped on Avicebron,
Increase all allies' Arts Card & Buster Card effectiveness by 10% when he is on the field

A man who performed a terrible sin in pursuit of his ultimate creation: Adam. Repenting for his evil misdeed, this magnificent AoE Buster Farming specialist can help save time for any Master in lieu of Servants such as Nitocris and Paracelsus.

Avicebron’s main attraction is the massive NP Charge potential of Rapid Casting. Capping out at 80% NP Charge total, Avicebron can fire his NP nearly instantly, without having to resort to Starting NP Gauge CEs. In addition, he carries a 3-turn Buster/Arts Effectiveness buff in Numerology which helps to grant a little more punch to his NP. Naturally, this 2-skill combo sets him up to clear weak waves fast, but his low NP Damage can be very misleading. By carrying expensive, full damage budgeted CEs, and powerful supports, Avicebron can even clear third wave enemies under the supervision of a more experienced Master.

His third skill though, Tranquil Fig, works a little differently. It grants Invincibility and healing upon his death to his allies. While fairly unusable during normal questing, where death is rare, it has some niche, fun, uses in combination with Taunts and heavy enemy damage. Still, it means that Avicebron is often 1 skill down compared to other Casters.

While superbly situated for farming, Avicebron does suffer in quests where Servants are expected to do more than launch 1 or 2 NPs and where fights do not end quickly. His long cooldowns mean that Masters should not expect to do more than 1 rotation of his skills, while his utter lack of survival skill means actually dying may not be so difficult against strong enemies. Lastly, to get the most out of Avicebron, Masters need to level his skills to high levels, and carry (and level!) Max Limit Broken 5* CEs. A new Master may want to save Avicebron for later, especially as his Lostbelt materials may be hard to acquire without Lostbelt access.

In conclusion, Avicebron is an excellent budget substitute for Masters without Nitocris. His Buster nature allows him access to a massive amount of Buster supports (Merlin, Nightingale, Shakespeare, Raikou (Lancer), etc.), unlike Paracelsus, whereupon in combination with strong 5* CEs even his otherwise meagre NP Damage will compete with top AoE Casters. A grand statement from a man with such a physical tiny stature.

Clocking in at a whopping 54.5 to 80%, Rapid Casting is the cream of the crop when it comes to charging an NP Gauge. Not only does this make launching Avicebron's AoE NP very simple, but it makes him an excellent carrier of Event CEs and extremely powerful CEs while farming. Most Servants rely on a NP Charging supports such as Waver or Starting NP Gauge CEs to launch their NP immediately, whereas Avicebron can also draw upon more pure offensive-minded Supports to instead improve his damage.

As a result of his NP Charge, Avicebron can scale hard, not just with his skill levels, but with the power of a Master's CE selection. Avicebron with a Black Grail can unleash some terrifying damage, and the additional damage modifiers gained from such CEs help to offset Avicebron's lack of high base NP Damage. Numerology helps to boost his damage, but it will not be enough on its own for beefier waves. On the other hand, pure Starting NP Gauge CEs allow Avicebron to launch 2 (weaker) NPs in succession, given the right supports.

With up to 38% Arts Effectiveness in his kit from Numerology and Territory Creation, 3 Arts cards, and an Overcharge that yields a minor NP Gain buff, it isn't terribly difficult to charge another NP after a few waves of Arts cards.

Tranquil Fig only activates once Avicebron dies, but a stack of 2-3 hits of Invincibility over 3 turns is a very powerful team buff, and generally will help to absorb 2, if not 3 turns worth of damage. Getting it to activate can be problematic, but Taunt CEs or leaving Avicebron unprotected during NPs are just some of the ways Masters can try and get some use out of it.

Clocking in at 10 turns of cooldown at base, Rapid Casting is very likely not getting a 2nd skill activation in. Given that Avicebron would ideally prefer to launch his NPs with his Buster/Arts Effectiveness steroid, Masters might well have to wait to delay its use for optimal time as well.

With such emphasis on his NP Charge, his 0.9 Caster modifiers, and his lack of multiple offensive skills, it should be no surprise that for extended engagements, Avicebron's damage output struggles to match that even of his peers. Servants such as Charles Babbage carry more different types of damage buffs, and have multiple avenues for dealing damage.

With no survival skills of his own, Avicebron must rely on his allies to survive. Should a Master wish to do so of course.

Trying to access materials from later story chapter can be a very aggravating experience for new Masters. While his Ascension does not use them, getting his NP Charge to max does. Fortunately some can be acquired via Events, but it still limits newer Masters.

Essentially, Masters mainly need to worry about leveling his Rapid Casting as high as they can, although Numerology does help out a fair bit once Masters start stacking multiple damage buffs. Getting Rapid Casting to 10 is essential for getting Avicebron to clear 2 waves in succession or to obliterate a third wave of Assasins or Berserkers in a damage stacking setting.

Equipping Avicebron with the proper CE comes down to what he needs to do. Does he need to clear 2 waves, or 1 wave? For 1 wave of extreme executive enemy cost cutting, loading Avicebron with Pure Attack Stats CEs and as high NP Damage Up modifiers as possible. Those scale best with Supports and his own Buster buff. For 2 waves, or a mix-and-match set up, hybrid CEs with Starting NP Gauge and Attack Up/Buster Effectiveness are good picks as well. Lastly, for Masters who want to see Avicebron unleash his bag of on-death goodies, try using Taunt CEs to get a headstart on damage taken.