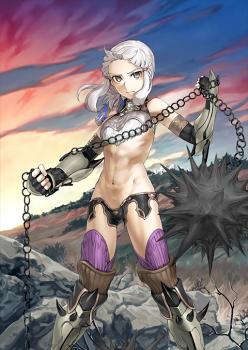 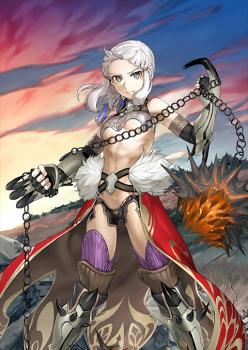 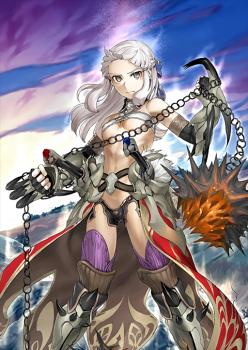 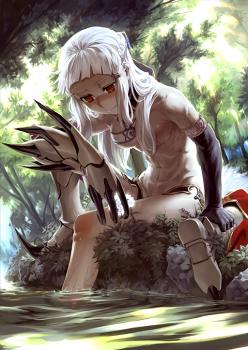 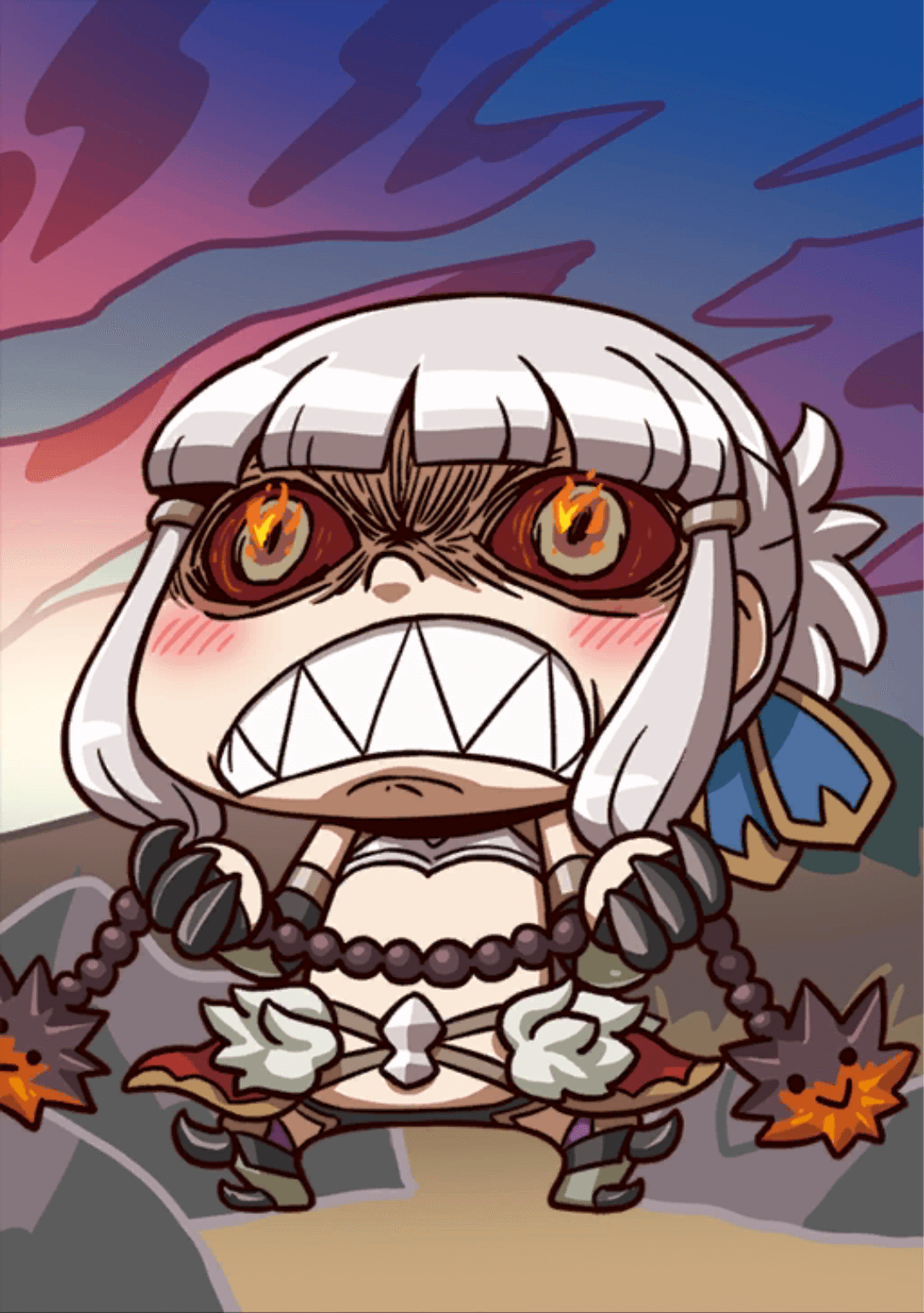 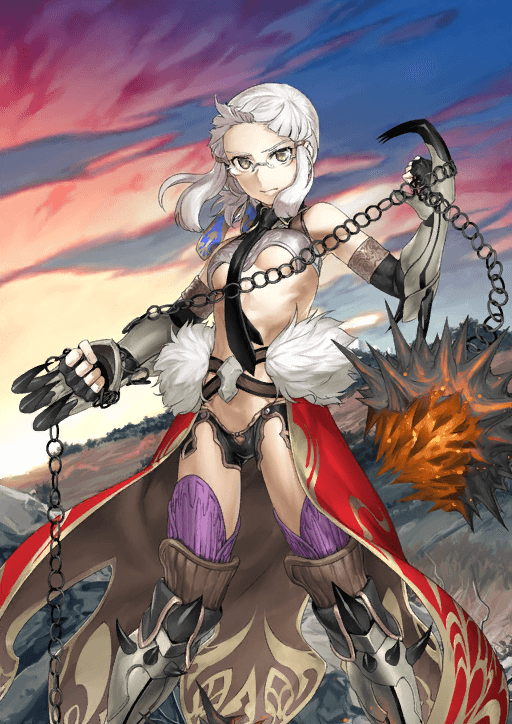 Apply Debuff Immune to self (3 turns).
Increase own NP Gauge every turn (3 turns).

Roar of the God of War A+

A Hero to Die on My Rage

Military Sash of the War God

When equipped on Berserker of El Dorado,
Increase Buster Card effectiveness by 20% & reduce defense by 10% [Demerit] for all allies while she is on the field.

"The strong rule the weak. What other way could there be?"

Seething fury, blind hatred and unbridled rage, all for *that* thoughtless man and all men like him. Channeling her anger, Berserker of El Dorado is truly worthy of the class Berserker, featuring a Buster kit with NP Spam potential, practically no survival and Buster team support.

Berserker of El Dorado’s game plan is simple, straightforward, brutal, and, provided Masters won’t let her get killed, very reliable. Via Golden Rule (Beauty) she charges her NP Outrage Amazon very quickly by up to 20% every turn for 3 turns, while her passive Madness Enhancement EX, high base attack, and her teamwide steroids Charisma and Roar of the God of War ensure it hurts badly. Furthermore, she will utterly obliterate her most hated foes (Greek Mythology Males) with a ridiculous up to 100% damage bonus for 3 turns, while her Golden Rule (Beauty) prevents the enemy from interfering, providing complete Debuff Immunity for 3 out of every 6 turns.

With all skills aimed at offense and a Berserker classing, it should be no surprise Berserker of El Dorado is deleted if a powerful enemy so much as looks at her funny. Against powerful foes Master must either bring in defensive support, defeat before she is defeated, or plan in her defeat as part of the strategy. In addition, while the nature of her staggered NP Charging is ideal for back-to-back NP strategies, it is far less effective for immediate turn 1 or 2 burst damage strategies as is often required during raids or optimized farming.

What is great about Berserker of El Dorado is that her kit is perfectly clear in what she can and cannot do. With no survival options, Masters ought to take on a Berserker mindset of their own and go all in and stack even more offense. After all, defeated enemies don’t get to attack in the first place.

Despite a BBBAQ deck, Berserker of El Dorado has little difficulty charging her NP in time. With 60% total NP Charge over 3 turns at her fingertips, as well as remarkably good NP Gain statistics, Berserker of El Dorado excels particularly at unleashing 2 NPs in the span of a 3-turn period. With a little NP charging help from her allies and CEs, her Charisma and Roar of the God of War will still be in effect for both of her NPs, resulting in massive damage spread across 3 turns (or 2 Break Bars).

Berserker of El Dorado’s NP is among the strongest of her rarity even against normal opponents. Adding in her 12% Madness Enhancement and her two steroids, her effective steroids on NP turns can reach up to ~56% for Buster Cards for 3 turns.

Neither of these aspects are very impactful on Berserker of El Dorado’s general performance but they are nice boons if they do happen to come into effect. Against any of the unfortunate Servants that happen to fall under this incredibly narrow niche, Berserker of El Dorado gains a 100% Bonus Damage buff. Meanwhile the Debuff Immunity on Golden Rule (Beauty) is often unnecessary during normal farming, but can prove very useful in challenging content versus debuff mechanics integrated in Break Bars.

Berserkers are known as glass cannons for good reason, and Berserker of El Dorado is the pinnacle of this image with only a single minor Attack Down on her NP. With some of the lowest base HP values of her rarity and her Berserker typing, Berserker of El Dorado will often fall quickly under repeated enemy attention. Masters have to resort to Taunts, defensive buff stacking or hard survival buffs to keep her alive.

While the staggered nature of her NP battery ensures that generally little of her total NP Charging budget is wasted, it is far less ideal if Berserker of El Dorado needs to unleash her NP immediately. She is thus less of a competitive pick for Raid content or 3-turn farming sessions.

With very few Servants in the roster being Greek Mythology Males, don’t actually expect to be able to make use of her massive bonus damage very often.

Berserker of El Dorado’s entire kit works together as a synergized whole. Thus, Masters should try to level her skills concurrently, putting all of her skills to 6 at the very least. Given her fragility, the faster a Master clears a quest, the better Berserker of El Dorado functions and the lower the risk of a stray Critical Hit or focus fire ruining the game plan. Thus, if Masters want to use her frequently, maxing all of her skills is essential for both the increased damage and the short cooldowns.

Masters should allow Berserker of El Dorado to come out of the gate swinging (literally). Piling on the offense via Attack-budgeted Craft Essences is a great way to ensure enemies don’t have time to hit her. Starting NP Gauge is an excellent choice to reduce the time spent charging Outrage Amazon and to make full use of Golden Rule (Beauty)’s staggered NP charging. Attack Up and NP Damage Up also stack wonderfully with her own Buster Performance, although Buster Performance Up is still quite viable. Masters who are reluctant to go all-out can resort to Survival Effects, but her survival options are best solved with better strategies/Servant picks.

Dealing with fragile (Berserker) Servants such as Berserker of El Dorado or Lu Bu can often be frustrating, with their defensive demerits so large as to require a level of babysitting that make them become unappealing choices.

The best solution in most cases is to consider their defenses a lost cause entirely. Instead, focus on pumping their offense so high that they can clear an entire wave (or large parts of it) before the enemy counterattacks. Even cutting the enemy’s actions down from 3 to 2 could be an effective decrease of 33% damage taken.

Next to simply buffing their damage, these offensive Servants scale incredibly hard with boosts to their base Attack via Grails, Gold Fous and highly leveled CEs with Attack. Ironically, for these Servants the higher Attack is more impactful for their survival than any added HP.