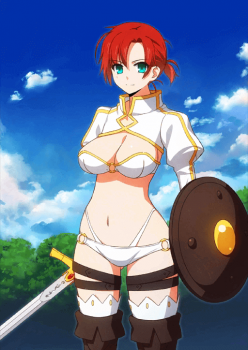 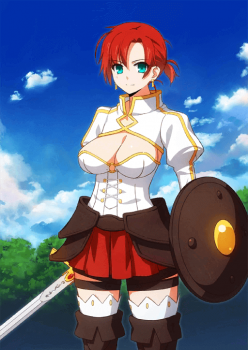 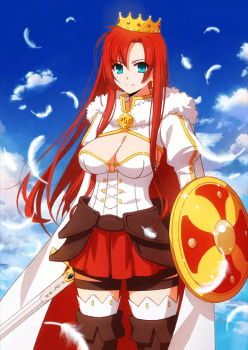 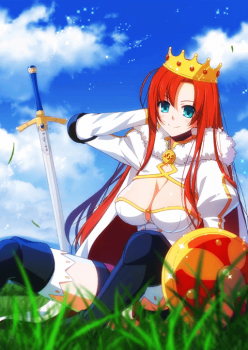 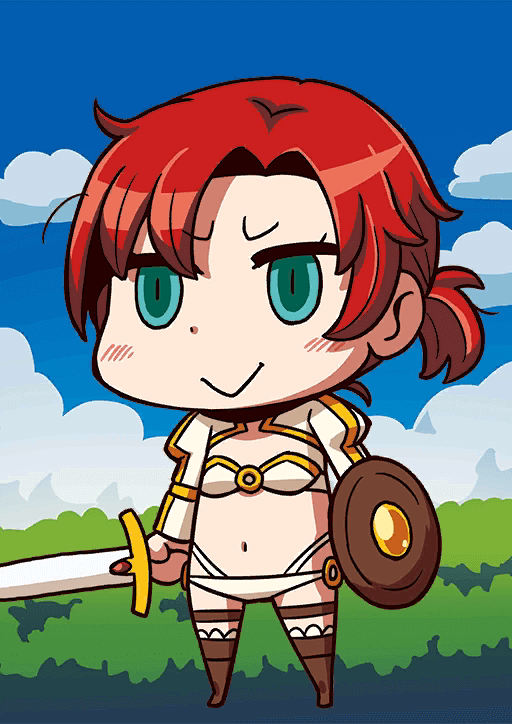 Vow to the Goddess B

Queen of Victory A

Unlocks after Rank Up Quest (Made Available 2/6/2018, Requires Ascension 4)

Chariot of Boudica B+

Chariot of Boudica (Upgrade 1) B++

When equipped to Boudica only,
Increase Critical Star Drop Rate of all allies by 20% while on the field.

Once a defiant queen who fought against Nero, Boudica now teams up with her for… Septem-related reasons. But, learning offense and defense from her time as a queen, Boudica will serve her Masters with her Arts Support Noble Phantasm and Arts skills.

As a queen, Boudica shows off her main strengths by protecting her allies. With her Chariot of Boudica Noble Phantasm, she gives her allies a powerful Defense Up buff for one turn, and a slightly weaker one for the two turns following, along with a 3-turn Attack buff following her Rank Up. In addition, she can keep herself alive after fatal hits with Battle Continuation. Her support continues by rallying her allies with Andraste’s Protection, giving the team an up to 20% Arts Performance buff for three turns. Combined with the additional Attack Up buff from her Noble Phantasm, she can help her teammates dish out decent damage. Furthermore, in very niche situations, she can become a Roman killing machine with her Vow to the Goddess, which after her Rank Up, will also bestow that ability, plus a Critical Strength boost, to all allies.

However, Boudica suffers heavily due to her class and low damage. Without an offensive Noble Phantasm, a lack of a truly effective non-niche steroid, and low base attack, she hardly creates much in the way of damage. This is problematic for a Rider, as Boudica naturally has a high Critical Star Weight, but will often fail to effectively use them due to a lack of Critical skills and her low damage (at least until her third Rank Up).

Boudica serves as a stalwart protection against enemies and supporting those around her. In an Arts team, she could potentially contribute to aid her allies.

Boudica provides Masters with stackable defense buffs on her Noble Phantasm, which can reduce enemy damage numbers to minimal amounts. While lacking a straight damage cut to lower this to zero, she does provide enough for a support to take care of the rest. This can be further bolstered with other sources of defensive buffs, such as Mash Kyrielight, potentially cutting incoming damage to zero.

After her Rank Ups, Boudica is capable of providing both an attack buff with her Noble Phantasm, and an Arts buff with her Andraste’s Protection, giving the party a significant boost to their damage for 3 turns.

True to form, Boudica has a vengeance against Romans, giving her three turns of bonus damage against them whenever she has the privilege to fight one. While her Noble Phantasm will not damage them, with the right supports she could get off a nice Critical hit. This is further enhanced with her Rank Up, which gives all party members a 50% Critical Strength boost and anti-Roman special damage.

Boudica has a low base attack, lacks an offensive Noble Phantasm, and lacks any major steroid to compensate. She will struggle to keep up with most all other Servants.

By virtue of being a Rider, Boudica gathers up a ton of Critical Stars. Without a major Critical Buff or at least decent damage, these stars serve very little purpose to her, and would be best to go to other servants. This will be corrected in her third rankup when she and her allies gain a 50% critical damage boost for three turns on a five turn cooldown, but until then she is not feasible as a critical support or damage dealer.

Boudica in many ways is similar to Mash Kyrielight, the free Servant Masters get at the start of the game. Yet her defense buffs are weaker than Mash’s damage cut and defense buffs, her Attack buffs are only slightly better, has a worse survivability turn, and costs more to place in a party. While we normally don’t list Servant weaknesses as their comparison to others, in this case it is a weakness as all Masters have Mash on their rosters.

Masters primarily use Boudica for her support as opposed to her damage. Seeing this, they would be best to level her Andraste’s Protection before anything else, primarily to reduce the cooldown to 5 turns at level 10. Battle Continuation does not gain much, and Vow to the Goddess is a super niche skill pre Rank Up, so Masters can leave these at level 1.

Boudica is all about stacking Defense Up buffs with early access to her Noble Phantasm, so a Starting NP Gauge CE will go a long way to promote access.  She also can use her CE in conjunction with her NP to reduce her own damage with a Defense Up CE. Last, she could bolster her role in increasing her party’s survivability with a party HP Up CE.

The young Queen of ancient Britannia in the 1st century.
Unable to forgive the Roman Empire after their vicious invasion which disgraced herself and her daughters, she rallied the kings into a rebellion, but ultimately lost her life when Emperor Nero's army crushed them.
Later, she became known as the "Queen of Victory."
She is one of Britain's many legends.

She loved everything in Britannia.
She loved the wind and the earth. The flowers and vegetation. The springs and streams.
She loved the insects and wildlife, and most of all, she loved the people.
However, that day, her husband Prasutagus died...

She was forced to endure terrible acts.
Scorn and disdain, violence and assault, agony and blood.
While they wounded her heart and body, she made up her mind to rise against Rome.
She vowed to protect her homeland, and take her revenge.
This is how she became the young battle queen.

[Sword of Boudica]
Rank: B
NP Type: Anti-Personnel
The Sword of Unpromised Victory. A one-handed sword with same name as her, Victory.
But it is not the same as the Sacred Sword of the Planet, for victory is not promised. It is a sword of wishes.

She loves all Heroic Spirits who's related to Britain, or England...
She loves them as if they were her own children.
Even though it was momentary, she adores the King of Knights for bringing victory to Britain.
Boudica completely becomes a kind-hearted older sister to her.

She's revered in modern British history.
Though she has lost the intensity once seen on the battlefield, as a Heroic Spirit, she has regained her original strength.
She now wields her sword with love and compassion.
Her love for Britannia, her love for her homeland, gives her strength as a mother for all.

[JP] FGO Winter Caravan Online 2021 Vol. 3 Stream
Stream to start at 1640 JST, about 5 hours from now. The first 20 minutes or so is…
Busti's Stall Diary Chapter #182: We don’t laugh because we feel good, we feel good because we laugh!
It’s a Bob Ross quote…
Hey everyone it's me again 🤣
This is probably my last question about kiara, so here it goes, I buy all the debuff,…
Kiara fight advice/help/support?
I’m having some struggles with the Kiara fight, and was looking for some advice…
Lore Question: Beast Kiara vs Nine-Tail Tamamo-no-Mae? Who Wins?
I’m not as familiar with the larger Nasuverse lore since I’ve never played the other…
Read More