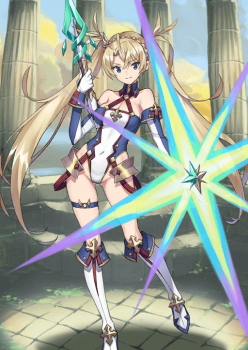 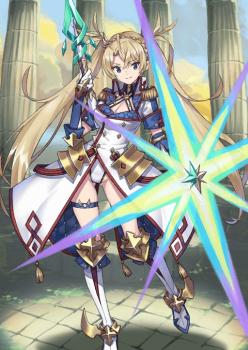 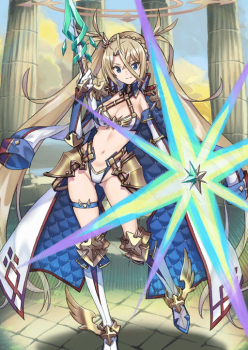 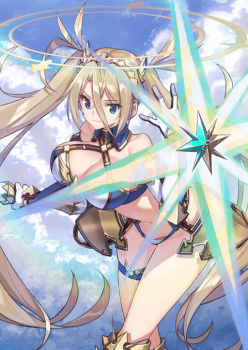 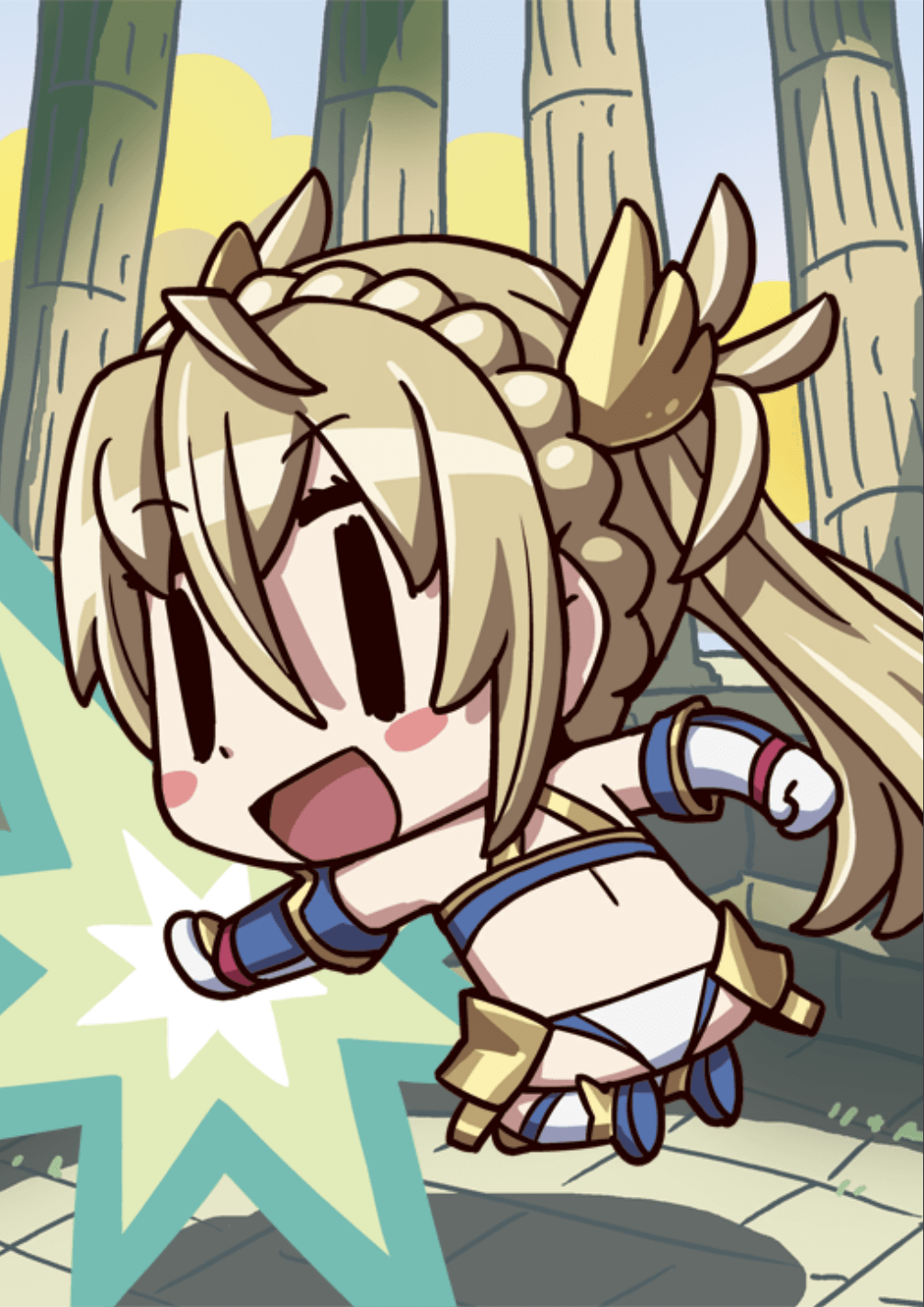 The Gleaming Enchanted Escutcheon that is Dazzlingly Beautiful

When equipped on Bradamante,
Increase all allies' NP Generation and NP Damage by 10% when she is on the field.

“It’s all right, the parts without armor are covered with magical power!”

At the bottom of the legends of Charlemagne is the story of Bradamante, a girl who wielded a magical lance and loved a man Ruggiero, butt needed him to convert from Islam to marry him. In FGO, she brings up the rear of a cast of AoE Quick Lancers capable of looping with double Skadi, even if she might need some more support from behind.

The seat of Bradamante’s powers comes from her Noble Phantasm. Thanks to her Clermont's Merit B’s quick bonus and Magecraft Removal A’s natural charge, if one were to ass ume a double Skadi and a Mage’s Association Mystic Code, she can loop against all classes with minimal overkill requirements. She isn’t a bum when it comes to defense either, having a rather nice Guts and defense up on White Feathered Knight B+ to pick her up off her tush should she fall. Not only that, but she provides utility via Magecraft Removal’s debuff removal to help an ally come from behind, and a stun on her NP to make the enemy collapse on their fanny.

While some may go over the moon for Bradamante, she struggles to pick up the rear. Her damage can be a bit below the belt due to a lack of passives. Further, without looping she doesn’t have much of a crack of getting her gauge up with her lower end hit counts. She also tails her Lancer looping competition as she requires a specific Mystic code or a Waver support as a cushion to effectively loop.

Despite having a cheeky voice, Bradamante really can help bring up the rear on any team needing an NP looper. Masters will really enjoy the repetitive views of her tush all the while!

Bradamante’s third skill provides her with a 20% charge, and she is capable of refunding 30% Noble Phantasm gauge against any wave of enemies with double-Skadi support. This makes it possible for her to fully charge her Noble Phantasm three times if she starts with a MLB Kaleidoscope and uses a Mage’s Association Mystic Code.

While lacking a hard evasive skill, Bradamante has a decent Guts skill, high HP values, and a 3-turn defense up buff. Masters looking to use her for an extended period of time could effectively support her to become a tank.

When not used for looping, Bradamante’s third skill is targetable, meaning she can charge up an ally’s gauge and clear their debuffs. This could be very helpful to help a bound ally recover and fire their Noble Phantasm to seal the deal.

Bradamante’s only passive comes in the form of debuff resistance, meaning the only tools she has to increase her damage are a moderately-powered Quick up, and her Noble Phantasm’s overcharge effect. Without Critical Damage bonuses, her sustained damage isn’t that wonderful either.

While she is a looper, she suffers from low hit counts all around on her cards making her natural charge outside of her NP a problem. She can partially recover this by using her NP charge skill, but 20% is rarely enough to compensate for poor natural gain.

Bradamante’s main issue comes from the fact that she does similar damage via her Noble Phantasm when compared to her 4-star AoE Quick counterparts, Valkyrie and Parvati. However, she has a higher team cost than either of them, and a harder time looping. This leaves her with less CE options and she is often stuck with lower damaging Mystic Codes.

Bradamante’s skills revolve around her ability to loop, and should be leveled as such. She requires a full investment to use, so Masters planning to work with her should be prepared to level at least first first and third skills to max.

Bradamante is a looper, making the standard looping CEs involving Starting NP Gauge or Hybrid Starting Gauge / NP Gain CEs her top choices. Lacking those she will not be able to loop, so Masters would likely want to boost her NP Damage.

One of Charlemagne's Twelve Paladins and a virtuous female knight, also known as the "White Feathered Knight," she was a princess born to the king's younger sister Beatrice and Duke Aymon of the House Clermont. Her older brother Rinaldo, wielder of the demonic sword Fusberta, was another of the Twelve Paladins. Like her brother, she is renowned as a master swordsman.

When Charlemagne's army was forced to retreat in the deadly battle against the great King Agramante, Bradamante willingly placed herself in the rearguard, where she engaged in a spectacular duel with the King of Algiers, Rodomonte.

After many adventures, Bradamante eventually fell in love with Ruggiero, a general of her enemy's army. In order to be with the man she loves, Bradamante had to overcome many hardships.

Whether her love is abducted by an evil mage, imprisoned by an evil witch, or even if a prince of Greece seeks her hand in marriage, Bradamante never abandoned her love, and ever sought to be with him.

She is a knight strong both in heart and body, and will never give up. In pursuit of her dream, she is doggedly relentless, never giving up in the face even of repeated failure or misfortune. She is truly a virtuous female knight who, when faced with a dilemma, remains steadfast in her belief in justice and doing right.

She hates mages, because she was treated poorly by them during her lifetime. Merlin, however, is the exception. Surprisingly, she has a connection with the great mage. He gave her advice on her adventures, using a medium to communicate with her. Bradamante holds him in high esteem.

The Blinding Flash of a Demonic Shield.
A demonic shield owned by the evil mage Atlante, who once abducted her love, Ruggiero. With its True Name revealed, the shield emits a powerful burst of magical energy, forcing the target to faint while sustaining damage. Even if the target does not faint, the shield's magical light drastically diminishes their agility.
It bears mentioning that she does not primarily strike with a shield. Perhaps it is because she's just so excited to be manifesting at all, she just unconsciously charges forward to bash her targets. It is said that when Bradamante defeated Atlante, she took the shield that he held, and she gained the Phantasmal Hippogriff. (Should she be summoned as a Rider-class, Hippogriff would come with her.)

The Lovely Princess's Ring.
A ring of magecraft possessed by Angelica, the beautiful princess of a foreign nation, who enthralled Roland, one of the Twelve Paladins, as well as Rinaldo, Bradamante's older brother. It is said that the ring can nullify various effects created through magecraft. Bradamante obtained this ring under dire circumstances, and used its power to rescue her love Ruggiero from the evil mage Atlante.

Her Magical Resistance skill is ranked A due to this Noble Phantasm; Normally, it would be ranked C. Additionally, it grants her the Magecraft Removal skill.

Should its True Name be revealed, the entire party would gain tremendous protection from magecraft, but its True Name is not generally revealed in this game. The Noble Phantasm also possesses the power of invisibility, but that is not so commonly used. During her manifestation, the ring's magical energy is imbued in her spear, which appears to raise its combat power against anything magical.

Bradamante, as a Servant, is best described as someone continually pursuing a shining dream, given her devotion to Ruggiero. So long as she embodies her story, Ruggiero will continue to be the hope she tirelessly seeks. She may never reach a happy ending as she did in her life, but it is her eternal pursuit that defines her as a Heroic Spirit.

"Of course I'm a little sad! But before I get all mopey, I'm a holy knight first and foremost, so I will do my very best to try to reclaim the world!"

"That's the spirit. Oh by the way, I'm speaking directly into your mind."