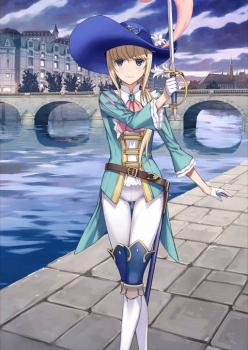 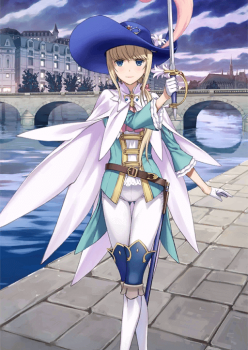 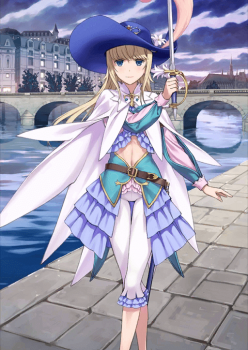 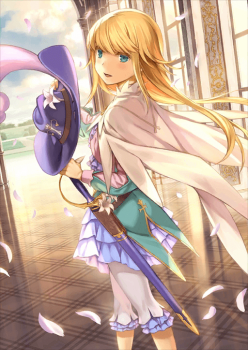 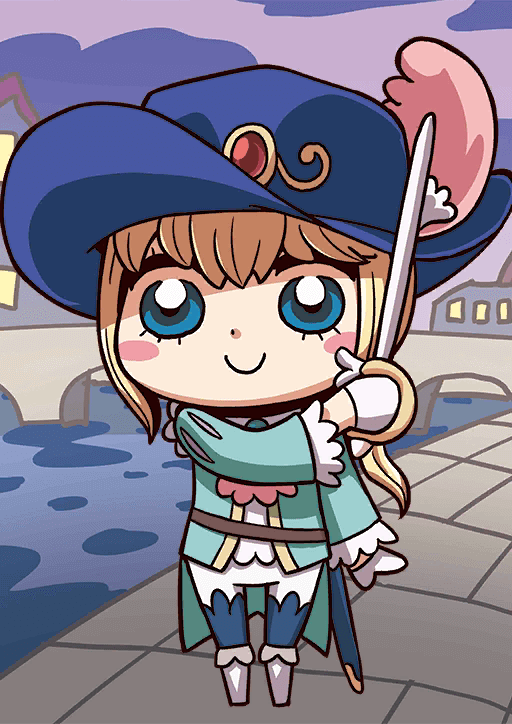 Apply Target Focus to self (3 turns).
Recovers own HP.

Chance to inflict Charm on all enemies (1 turn).

<Overcharge> Chance to inflict Charm on all enemies (1 turn).

Gift from the Queen

When equipped on Chevalier d'Eon,
Increases Arts Card performance of all allies by 15% while they are on the field.

Be it a knight, a spy, a man, or a woman, Chevalier d’Eon has been all of these at different points in time, but one thing stays constant during all the years of their life - their loyalty. A staunch protector of the crown of France, the durable d’Eon is most known for being an Arts Saber with a three-turn Taunt.

It’s their Beautiful Appearance skill that truly defines d’Eon’s fighting style, allowing them to protect their allies from harm for three turns. With their very base high HP pool, additional healing and Defense Up, the debuffs on Fleur de Lis, and Mind’s Eye (True)’s Evasion, d’Eon’s capability to take hits is rather impressive. Last but not least, Self-Suggestion allows d’Eon to tank (and cleanse) enemy debuffs as well, potentially granting the team a strategic advantage during high difficulty content.

d’Eon’s offensive side, however, leaves a lot to be desired. Due to their defensive kit, d’Eon is neither able to dish out enough meaningful damage on their own, nor support teammates’ damage dealing capabilities to a sufficient degree. This is in part caused by Fleur de Lis’ undertuned debuffs, which only truly become worthwhile to apply at higher NP levels. Meanwhile, AoE attacks as well as various anti-Evasion measures (Buff Removal/Sure-Hit/Invincibility Ignore) present the biggest threats to d’Eon’s defensive style, greatly reducing their effectiveness when deployed.

When it comes down to it, Chevalier d’Eon is a Servant who excels at a single thing - and that is, redirecting damage and debuffs away from his teammates. While they have several glaring issues, d’Eon can be a very potent tool if used correctly, be it as a dedicated escort of otherwise-squishy Berserkers, or as a strategic disposable piece in suicide tanking strategies.

Taunts can keep squishy allies alive for a much longer period of time, and d’Eon’s 3-turn Taunt  is able to do this much more reliably than any of its single turn counterparts. The ability to tank damage meant for other Servants also increases the predictability of how the fight progresses and it is usually very clear when d’Eon is about to leave the fight, enabling much more reliable Servant Ordering Strategies.

Self-Suggestion’s debuff resistance buff makes d’Eon immune to most debuffs, a property that when combined with Taunt allows them to effectively tank enemy debuffs without sacrificing their own performance. In addition, it cleanses his own existing debuffs as well, allowing for a longer effective debuff immunity than the skill’s cooldown implies.

With a fairly low attack stat, a non-damaging NP, and the lack of any sort of on-demand damage buff, d’Eon brings few offensive benefits to the team. While d’Eon’s normal cards deal acceptable damage, they have to rely on allies when it comes to finishing enemies off. On the bright side, their Saber-class Star Weight won't steal critical stars from other Servants, unlike main competitor Georgios.

D’Eon’s defensive side is based on their Evasion skill, making d’Eon a great tank against enemy NPs. The Evasion’s one-turn duration and the resulting downtime, however, results in weaker sustained defenses compared to d’Eon main defense buff-based tank competitors. In addition, d’Eon’s Taunt also includes their only healing component, yet d’Eon will often be at full HP when Beautiful Appearance is used. At higher NP levels though, Fleur de Lis’s Attack Down debuff can be used to patch this weakness.

While d’Eon’s Taunt is very effective at dealing with single-target hits, it is unable to protect their teammates from AoE attacks, such as those from Dragons or Demonic Pillars. Additionally, d’Eon is vulnerable against those with the means to bypass Evasion, as they lack other avenues of strong reliable damage mitigation.

Fleur de Lis’ AoE Charm is unfortunately unpredictable at best, with a very low chance to land even before considering Debuff Resistances. The Attack Down and Defense Down debuffs are more useful, though rather undertuned in values. Only at high NP levels does the NP turn into a valuable defensive tool, but even then Masters may elect not to use it due to its non-damaging nature.

Chevalier d’Eon’s Evasion and Taunt skills are crucial to their role, and having them maxed can prove critical in more difficult quests. Leveling them concurrently is generally best. Self-Suggestion, on the other hand, is more situational, and level 8 is enough to reach 100% debuff resistance thanks to d’Eon’s Magic Resistance C.

As a survival-oriented Servant, d’Eon works excellently with Defense Up CEs, while their high HP pool makes Healing Received Up ones alluring as well. CEs which activate On Death/On Entry can be used for suicide Taunting strategies, and against the hardest enemies, CEs with Invincibility/Guts provide a great way to extend d’Eon’s life. As d’Eon is not particularly concerned with stats, his Bond CE may also be employed in Arts teams with little drawback.