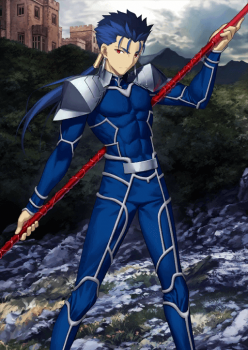 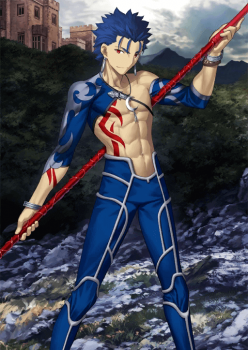 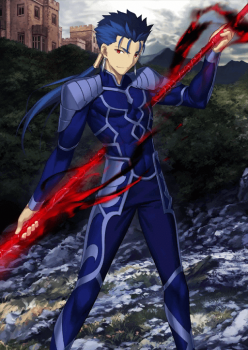 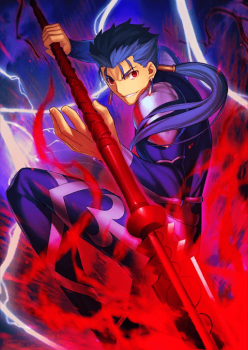 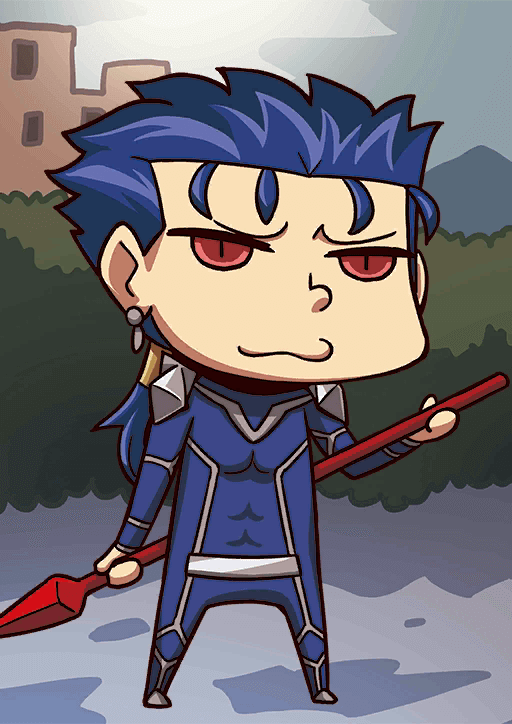 Protection from Arrows B

Deal significant damage to a single enemy.
Apply Sure Hit for yourself (1 turn).

When equipped on Cu Chulainn,
Increase your NP Strength by 30%.
30% Chance to increase critical damage by 10% when attacking (3 turns).

“Your heart is mine! Gáe Bolg!”

Despite the ‘Lancer is dead’ memes, Ireland’s Child of Light is easily one of the game’s hardiest Servants. While Cu Chulainn’s defensive kit may seem to conflict with his damaging Quick NP at first glance, this mix of staying power and capability to output single-target damage makes him one of the best Servants in the game in regards to solo or last stand performances.

Aside from the powerful Protection from Arrows skill, what makes Cu Chulainn uniquely powerful is that his two other skills are also survival-oriented. Battle Continuation provides Guts and Disengage provides healing and cleanses Cu of any debuffs, letting him cycle through his defensive cooldowns and minimize his moments of vulnerability. Gae Bolg meanwhile provides an offensive dimension to Cu Chulainn with its single-target nature and defense debuff, though its instant kill potential is utterly unreliable even at best. After its NP upgrade, it not only increases in damage, but it also applies a one-turn Sure-Hit buff on Cu, granting him some extent of offensive flexibility.

Despite Cu’s various defensive tools, Protection from Arrow’s Evasion still forms the centerpiece of his kit, as his natural HP pool is still that of a 3-star Servant. Enemies with Sure Hit, Ignore Invincibility, or buff removal are able to rob Cu Chulainn of his greatest strength, leaving him very vulnerable. Secondly, having a defense-focused kit also means that Cu has no way to boost his own damage. This low offensive power sometimes causes situations where he contributes little to the fight, while also preventing backrow Servants from entering the field. This aspect often leaves Cu on the bench as a Master grows stronger and clearing speed becomes the main priority.

While Cu Chulainn’s limitations mean that he is far from a perfect answer to everything, it is his high survivability, and low investment cost that any new Master can appreciate. From a reliable Lancer in the early game, Cu turns into a solo/last stand specialist that can grasp victory from the jaws of defeat, a role in which he truly excels.

With one of the most survival-oriented kits in the game, Cu Chulainn can be expected to reliably survive the toughest of fights. While Protection from Arrows is typically the main talking point in this regard, the additions of Battle Continuation and Disengage's heal are also major factors which distinguish Cu from the rest of the cast.

Cu’s ability to cycle through his various defensive options puts him in the spotlight as one of the best Servants for solo/last stand scenarios. This is mainly thanks to his main defensive skills, Protection from Arrows and Battle Continuation, that can be used preemptively, allowing Masters to save some cooldown turns in advance. This trait becomes far more prominent as he attains higher skill levels, thanks to the lower cooldowns on his base skills.

As a 3-star Servant, Cu is relatively cheap to invest in, and his staying power allows Masters to more easily clear (Archer-heavy) stages such as the Chaldea daily quests. While he may get sidelined somewhat as a Master’s Servant roster grows, his solo/last stand potential allows him to provide value even in the later stages of the game.

Much of Cu Chulainn’s survivability revolves around his ability to rotate Evasions, and enemies possessing sure-hit or buff removal are able to effectively neutralize his niche. As such, he should aim to avoid these types of enemies as much as possible.

Due to his lack of any offensive buffs, Cu’s offensive potential is middling when compared to his alternatives (e.g. Cu Chulainn (Prototype)). This makes him unsuitable for players desiring faster runs and more offensive strategies. After all, the best defense is a good offense, often applies to many difficult encounters.

While Cu Chulainn’s kit works perfectly fine even at base skill levels, all of his skills benefit from the cooldown reduction gained via leveling, improving Cu’s capability to cycle through his defensive options.

While most of Cu Chulainn’s damage comes from his NP, his mediocre NP gain means that Starting NP Gauge CEs are recommended. CEs granting Quick Performance Up are his preferred damage boosting option, while those with Invincibility can be used in certain specific situations.

Cu Chulainn’s survivability is so great that he is capable of tearing up some challenging encounters all by himself.

A typical solo setup involves two level 1 Servants with a taunt: generally a Leonidas and a Georgios. In Cu Chulainn's case, Protection from Arrows should be used first, while letting the two others taunt and die one at a time. After turn 3, Cu Chulainn will be left alone, granting him access to constant Brave chains. Starting from this point, the Master’s ability to rotate Protection from Arrows, Battle Continuation, Disengage, as well as their Mystic Code abilities will determine the strategy’s success.

Due to the strategy’s emphasis on repeated skill usage, having maxed out skill levels to reduce cooldowns is key.

With a dislike of decorations and honor, this spearman prefers to listen to his instincts.
If it's a job, he won't hesitate to kill even an ordinary citizen.
Though he can be merciless outside of the job, he's honorable and takes care of others.

Height/Weight: 185cm, 72kg
Source: Celtic Mythology, Ulster Cycle
Region: Ireland
Alignment: Lawful-Balanced
Gender: Male
It was too much trouble to use the Runes, so he sealed them away.

Battle Continuation: A
Doesn't know when to give up. He makes it possible to fight even with critical wounds, and survives unless given a fatal blow.

Disengage: C
The ability to escape from battle.
Because of these two skills, Cú Chulainn's true value shines in group skirmishes over one-on-one duels. But he loves duels, so this fact doesn't get noticed all too much.

Runes: B
He possesses Northern European magical crests called Runes.
Warriors in the Land of Shadows excel at many arts, and no warrior is ever raised to merely thrust a spear...
This is the way his mentor Scáthach thought, so Cú Chulainn is well-versed in Rune spells.
He is close to being a top tier rune user but he thinks the Runes just get in the way, so he does not use them often.

As a child, he grew up with the name Setanta.
Cú Chulainn means "the Hound of Culann."
When he was young, Setanta accidentally killed the watchdog of a wealthy merchant named Culann.
The name stems from the vow he made to the merchant:
"If this dog has a child, I will raise it, and turn it into a faithful watchdog.
Until then, I will make sure to protect you."

As an adult, Cú Chulainn joined the "Red Branch Knights" who protected the King of Ulster.
In order for him to marry the woman he loved, he was tasked to enter a place called the Land of Shadows.
Cú Chulainn overcame many obstacles to reach the Land of Shadows.
There the lord of the land, the witch Scáthach, took a fancy to him.
He trained under her to learn many spells and martial arts skills.