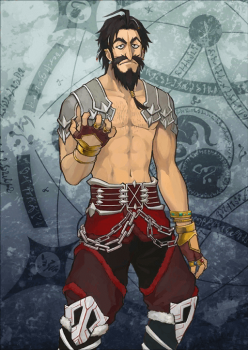 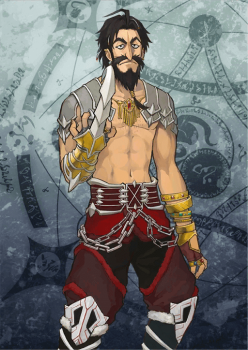 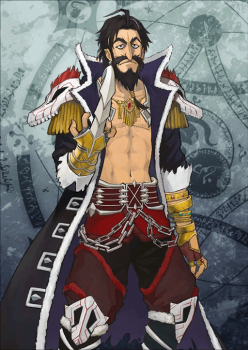 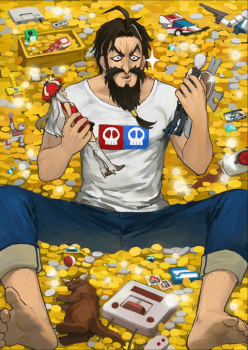 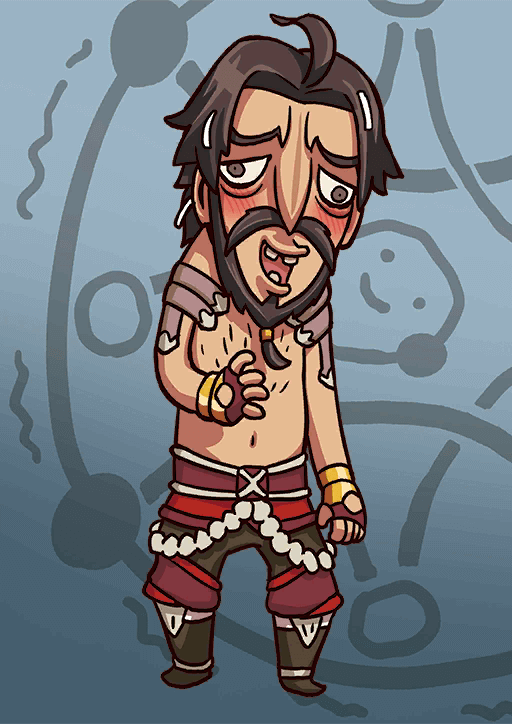 Voyager of the Storm A

Low chance to decrease Charge for all enemies.

Revenge of the Queen Anne

Chance to reduce NP gauge by 1.

Revenge of the Queen Anne

Glory of the Past Days

When equipped to Edward Teach only,
Increase Buster Card effectiveness of all allies by 15% while on the field.

“Eh?  Laughing by myself is creepy?  You’re too cruel! I was chuckling at my fantasies.  They’ll come true, I tell ya!” - Edward "Blackbeard" Teach

The fearsome scoundrel and otaku spirit animal Edward “Blackbeard” Teach channels his gap personality with an offensive off-support kit.  While he can support his teammates by either buffing their NP turn or healing them, the true value of his skills lie in surviving long enough to launch multiple revenge campaigns with his strong self-buffs.

As one of the few Riders to lack the Riding passive, Blackbeard’s poor 2-hit quick doesn’t curry any favors.  Fortunately, his two Arts cards do have slightly above average effective NP gain, which allows him to fill up his NP gauge consistently through Arts chains.  Blackbeard also packs pretty high attack for his rarity, with a decent HP pool to boot. With just his own buffs active, he can hit above what’s expected from low-star Servants.  On the other hand, the NP gauge drain on his NP has a low chance to trigger and the flat star gain on it is comical. Without any consistent methods to capitalize on his high Rider star weight outside of attack buffs, his native crit potential is almost abysmal.

At max level, Voyager of the Storm and Pirate’s Honor combine for roughly 66% total in damage self-buffs.  This is higher than any of the non-gold and even some gold Riders.

Pirate’s Glory is a simple but highly effective skill.  A 3-turn attack steroid stapled to guts on a low cooldown more than makes up for the 50% debuff resistance demerit.  The guts notably doesn’t expire until activation. This allows him to not only buy turns in a solo situation, but use the skill again once it’s triggered.

Voyager of the Storm allows Teach to buff his allies’ offensive NP turns on a decent cooldown.  Although the values seem low individually, they provide a total 35% NP boost at max level and a modest buff to following command cards.  Meanwhile, Blackbeard shows his gentlemanly side by healing female allies for up to 4000 HP on demand, with male Servants receiving half that amount.  For female Servants (+Astolfo, d’Eon, and Enkidu), this is on par with the healing received from an NP1 Medea Lily’s NP.

Unlike Protection from Arrows, the ideal conditions for guts are when the Servant is the last Servant standing, when dying will end the enemy turn.  However, activating guts while other Servants are alive will allow the enemy to strike again and potentially kill Blackbeard. Still, if players go for a solo/last stand playstyle, it brings up his next weakness.

Blackbeard is best compared to Iskandar with their strong hitting NPs, but similarly lacks tools like Drake’s to charge or gain more NP gauge.  This puts him at a disadvantage in a solo situation, where he is unable to rely on allies’ Arts card for Arts chains and has to rely on his AQA chains.

This level up recommendation assumes a focus on Blackbeard’s offensive abilities.  However, it may be preferable to level Voyager of the Storm and Gentleman’s Love first if you would like to focus on his supportive abilities.

Like most offensive Buster Servants, Blackbeard makes good use of NP damage up, Attack Up, Buster Up, and Starting NP Gauge.  Although he can crit, he lacks the additional tools to reliably make the most of critting with his skillset.  Alongside the usual Kaleidoscope, or Limited/Over Zero line, here are a few other recommendations.

The combination of starting NP Gauge and a Buster buff gets Blackbeard the most mileage out of his existing buffs with some nice multiplicative buff stacking.  The starting NP Gauge also mitigates his lack of NP gain skills for the first NP.

With its passive 15% attack buff, Blackbeard can have up to 58% attack up with all buffs maxed and active, which gives him even more mileage from his 2-star stats.  Again, the starting NP Gauge helps fix his NP gain slightly.  Halloween Princess is a decent alternative.

Fitting enough for our spirit animal, if you want to really bring out Blackbeard’s good side, using a Max Limit Broken Gentle Affection will result in a 4800 HP heal.

The most well-known pirate in the world, and a scoundrel who most likely solidified the concept of pirate in the public consciousness. He conquered the Caribbean Sea, drunk on rum, women, and violence. He also accrued a massive fortune.

"Now, the great Blackbeard makes his passage!"
Right after the Age of Exploration, the Age of Pirates began.
Edward Teach made his appearance right as colonial trade ships were ripe for plundering, offering vast riches for anyone who got their hands on them.

It is not known whether or not Edward Teach is his real name. His history from before he became a pirate is unclear. In any event, he made his living as a pirate and assembled a large fleet.

He wasn't a normal sailor; other pirates were said to fear him as well.
His great beard contained fuses that were woven into it, and his fiery eyes were akin to the goddess of hell herself.
His subordinates even feared him as a personification of the Devil himself.

Blackbeard's fleet had many high and low points, and one by one they were eventually cornered. Blackbeard and a small number of his crew were ambushed by the military, and they boldly faced them head on. It is said that even after being stabbed twelve times and taking five shots, he continued fighting with an angry scowl. He finally collapsed while reloading his gun.

Now Blackbeard is a complete otaku. Thank you so much.