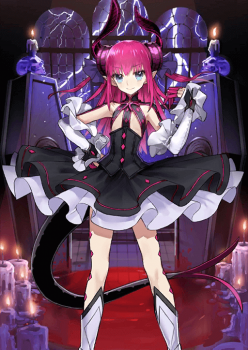 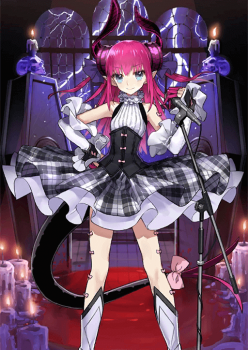 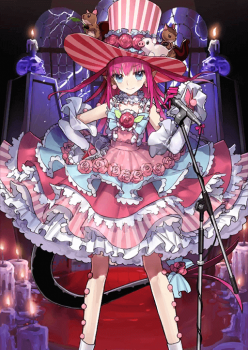 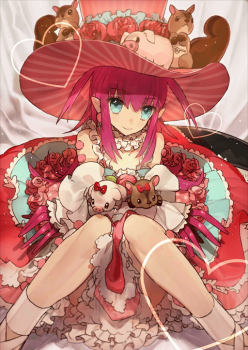 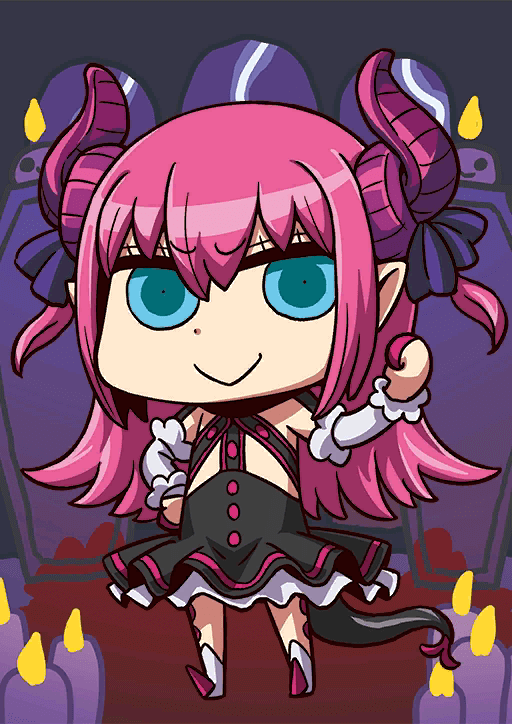 Decrease DEF for ALL enemy (3 turns).
Remove 1 buff from ALL enemy.
100% Chance to inflict Skill Seal on ALL enemy (1 turn).

Upgrade after Rank Up Quest 2

Deal heavy damage to all enemies that ignores DEF Up.
Decrease Buff Success Rate for all enemies by 20% (3 turns).

When equipped on Elisabeth Bathory,
Grant 500 HP Regen per turn to all allies while she's on the field.

As ferocious (if less deadly) on the battlefield as on stage, Elisabeth is both an offensive and supportive Servant. Equipped with a party-wide ATK buff and a targetable DEF debuff, not only is the Blood Countess able to buff her own damage, she is also able to extend the same benefits unto her teammates. After her Strengthening Quest, her Sadistic Charisma skill further buffs the ATK of female allies, turning her into a powerful damage support for all female allies.

Yet, Elisabeth has little in the way of utility or defense aside from her NP’s defense ignore and curse, and the Battle Continuation skill, which is a rather inflexible defensive skill. Her NP also hits for a relatively low amount of damage before its upgrade later down the line. Since she neither profits from her own female Charisma boost nor from access to any other steroids such as critical-related skills, her potential in terms of being a primary damage dealer is therefore limited.

All things considered, while Elisabeth cannot deal much damage on her own, her damage support niche contributes a lot to the team’s overall output, making her a great choice for a secondary damage dealer.

Elisabeth’s Sadistic Charisma alone is capable of providing up to 40% ATK for her female allies, lasting for three turns. Torture Technique’s additive DEF debuff effectively bumps this number further up to 60%, higher than what most other supports can provide. While Elisabeth is not as effective in supporting non-female Servants, she still gives them a noticeable damage boost.

With an above average ATK stat, as well as her own buffs, Elisabeth is able to deal a decent amount of damage. While her NP damage is relatively low in comparison to other Servants, it is still a great help when dealing with multiple enemies. Furthermore, she still profits from her Lancer class’s 1.05 attack modifier.

With her straightforward kit, Elisabeth may struggle to deal with the many gimmicks presented in some challenge quests. This, in turn, relegates her common usage to simpler, damage-oriented fights, although her Battle Continuation skill may be useful against certain bosses.

With no critical-oriented tools whatsoever, Elisabeth’s 2 Quick cards provide little benefit, while decreasing both the consistency of both her NP gain and the team’s Arts chains. This is less of a problem when she is used as a damage dealer, but as a damage support most Servants would prefer easier access to Arts chains for longer fights. As a result, this somewhat hurts her overall viability.

Elisabeth’s kit is rather straightforward, and unlike other Servants, her skill leveling priorities are pretty much set in stone.

This skill is the primary contributor to Elisabeth’s niche, providing an up to 40% ATK buff for her female allies when maxed. While it essentially becomes a normal Charisma for non-female allies, it is still more reliable than Torture Technique, as Torture Technique can be resisted.

Torture Technique applies a 20% DEF debuff on an enemy, which allows Elisabeth’s team to focus down an important target faster. However, a targeted DEF debuff is fundamentally inferior to ATK buffs, as debuffs can miss, and it only increases damage against the targeted enemy. It is still a very powerful skill against bosses, however, and should be leveled second.

Elisabeth’s only survival skill, Battle Continuation acts as a last defensive resort. While it does give her extra bulk, being revived at low HP is generally a risk best avoided if other defensive measures are available. As a result, this skill should be leveled last, and it is generally even fine to leave it unmaxed. Generally, increasing it to rank 4 has the best benefit-to-investment ratio.

Elisabeth’s Craft Essence picks aim to improve her damage-dealing capabilities, revolving around effects such as: NP Damage Up, Starting NP, and Buster Up. The effectiveness of each CE varies with the stage.

If Elisabeth's role is purely support though, pick a CE that boosts the rest of the team with stars or additional temporary buffs.

These CEs increase the damage of Elisabeth’s normal cards, presenting a more flexible option compared to the Black Grail. They effectively increase her single-target damage potential, and are thereby more suitable for single-boss stages.

Granting Elisabeth easier access to her NP while still buffing her damage dealing capabilities, these CEs are strong, versatile options. While Golden Sumo’s ATK buff synergizes poorly with Elisabeth’s own buffs, the immense ATK stat it provides more than makes up for this.

Best used for farming stages, these CEs allow Elisabeth to unleash her NP early on. The CEs’ ATK stat is the only damage increase they provide, meaning that these would not allow Elisabeth to effectively deal with higher-health enemies.

Many more options are possible, but as a support Fragment of 2030 provides the most consistent benefit to the team. Consider also Ox-Demon King or Golden Captures the Carp depending on when Elisabeth is brought in.