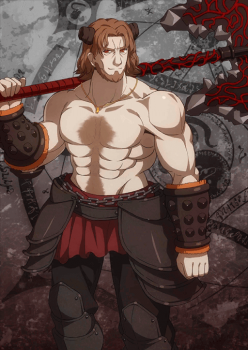 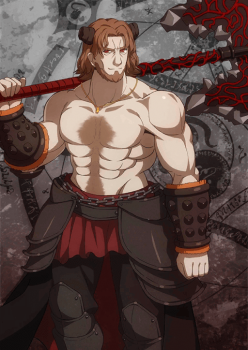 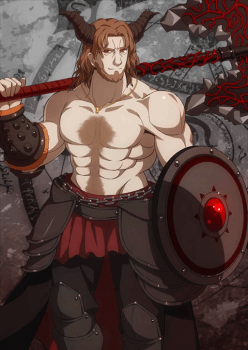 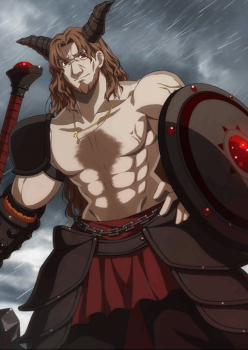 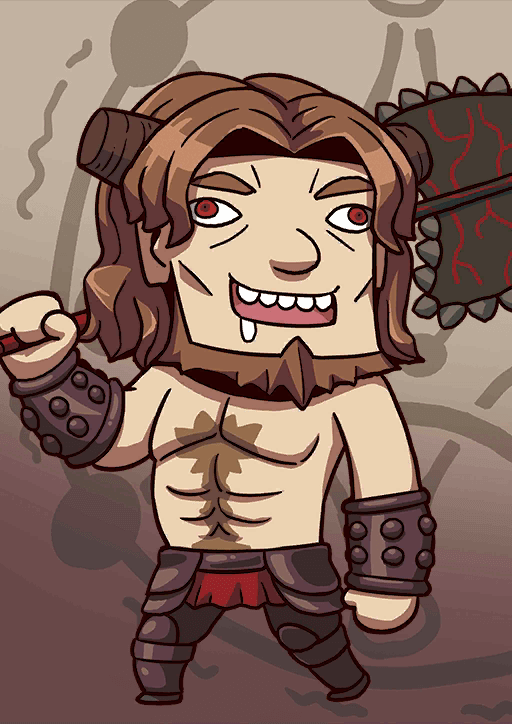 Self Guts Self Debuff Clear

Unlock after 2nd Rank Up Quest

Deal heavy damage to all enemies.
Reduce your HP by 1000. [Demerit]

When equipped to Eric Bloodaxe only,
Increase Critical Strength of all allies by 25% while on the field.

Eric Bloodaxe, the Bloodaxe King, is a pinnacle of manliness and wielder of a living axe that thirsts for the blood of his enemies. Blessed by his wife, the witch Gunnhild, Eric slew his kin and ruled over Norway for a short period. These days however, this charismatic and beloved Servant carves out a niche by farming quickly and powerfully. At maximum strength, Eric trades Spartacus’s NP gauge boost for simply doing more damage.  Notably, through Supporting Curse, Eric’s single target damage performance can overshadow Darius amongst the Berserker farmers.

But, the henpecked husband is made of fragile Berserker paper with low base HP. If left unprotected, Eric can fall to a stray critical hit from powerful enemies. The HP demerit on his NP doesn't do him any favors, either. Fortunately, Eric has access to both a battle continuation and a personal MAX HP up buff that also cleanses his debuffs. His targetable attack down and defense debuff is generally reserved for use as a steroid, but can also help prevent freak accidents for the Viking against tougher targets.

At his core, Eric is a beast of a (budget) farming Servant for Masters looking to cut down their time spent grinding straightforward quests. As a Berserker, Eric can be used in almost all farming situations in combination with Starting NP gauge Craft Essences.

Eric boasts not only a very high base attack for his rarity, but also Rank B Mad Enhancement, a targetable powerful defense down, and a high value attack steroid on his NP that scales with overcharge. Crucially, he activates this attack buff before his NP fires. With all these buffs active, a full NP Buster Brave chain will therefore deal some terrifying single target damage despite Eric's status as a bronze Servant with an AoE NP.

Building on the aforementioned steroids, Eric’s NP does excellent damage for such a low cost to deploy. Most importantly, Eric’s NP animation only takes about 3-4 seconds to clear the field. During long and repeated farming sessions, this swiftness can help reduce any associated tedium.

Offensively, Eric sets himself up for one powerful turn. With a single Arts card, preparing another NP will take a long amount of time without help. Furthermore, the steroid from his NP only lasts for 1 turn and his single target Supporting Curse neither lasts very long nor carries over into the next wave. Besides, in sheer single target damage performance both Caligula (with the right set up) and Lu Bu vastly outperform Eric. Meanwhile, competitor Spartacus can display an impressive amount of staying power and comes with an additional NP gauge boost.

Despite two skills aimed at alleviating this problem, his highness remains vulnerable to powerful enemies. Half-Dead Bloodaxe can be used proactively to try and soak some damage, but Eric’s Berserker typing effectively halves the MAX HP bonus. That his NP further eats into his already low HP further underlines his offensive and burst damage nature.

Eric is straightforward to level. Skills that can be used in a proactive way tend to be more valuable and Supporting Curse especially helps Eric in his noble and stately purpose of murdering his enemies.

Eric Bloodaxe excels at farming, yet lacks the means to charge his own NP bar. Thus, Starting NP Gauge is bloody essential. If more damage is all that is needed, then both Buster Performance and NP Damage Up stack multiplicatively with Eric’s various attack buffs. Keep an eye on the sheer amount of attack damage a CE can give as low rarity Servants disproportionally profit from additional attack or HP.

Eric’s bread and butter along with additional NP gauge boosts from allies or the Mage’s Association Suit. These options are indispensable.

If however, some more damage is needed to hit the right damage benchmarks to clear a node in 1 NP, then field one of these hybrid options.

While Eric’s main forte lies elsewhere, straight boosts to Buster damage for his basic command cards are best at providing a consistent improvement in performance. A MLB Hero Elly’s Adventure also outperforms Heaven’s Feel while Black Grail provides the most damage possible to his NP at a heavy price.

Possible CEs Choices to go for, (MAINLY) For Buster Servants
I have a bit of a dilemma, being gacha and event CE drop rates I swear. So to run down…
Genshin Impact is eating FGO's lunch
Mobile game spending has continued to grow in 2021, and will reach $89.6 billion from…
Busti’s Stall Diary Chapter #455: The Red Ninja
I realised I haven’t done a Kotaro thread yet. He was one of the first servants who I…
FGO Game character drawing challenge by someone who cannot draw
There is a drawing challenge out there that got popular lately. I wanted to share the…
[JP] Christmas in the Underworld Update + New Advanced Quests
As part of the Part 1 Improv-Singularity Repair Support 4 update, there have been…
Read More