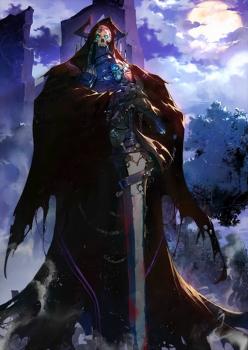 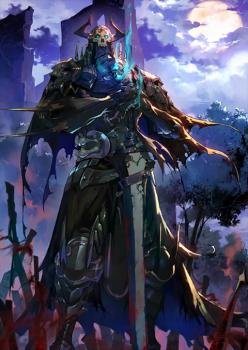 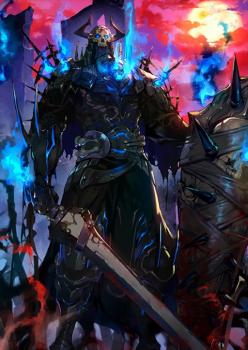 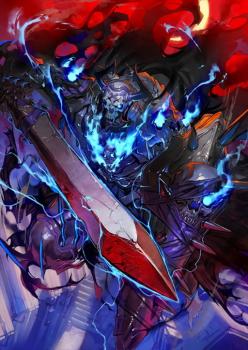 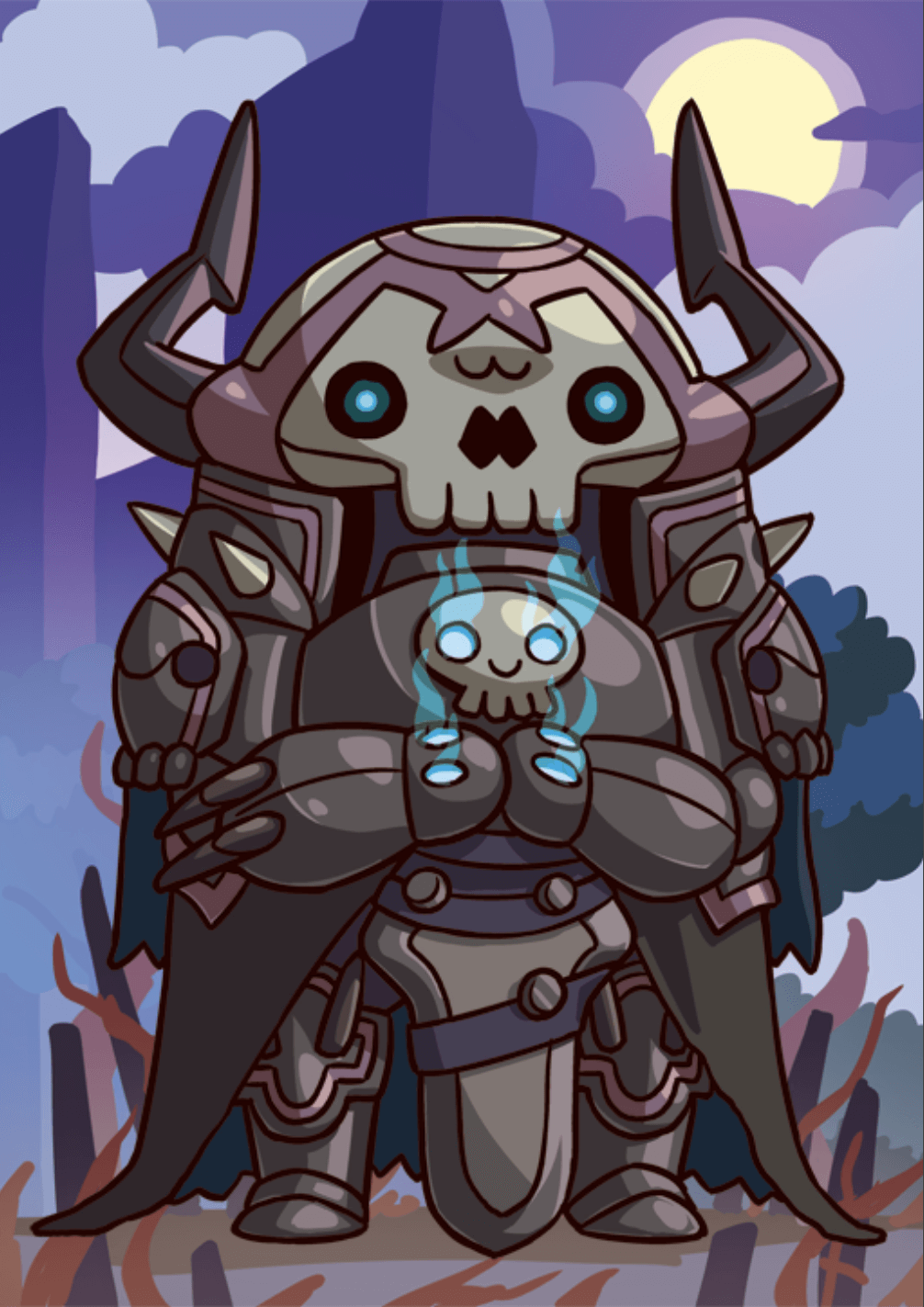 Protection of the Faith A+++

At the Boundary A

Nullify Instant-Kill status upon self. (Instant-Kill never works on him.)
Increases own Charm resistance by 100%.
5% Chance to Instant-Kill enemy with normal attack.

High chance to inflict Death to a single enemy.

The Angel That Announces Death

The Rift of the Valley

When equipped on First Hassan,
Increase your Debuff Resist by 100%.

“From the mountain abyss, I come, and only death do I bring. I am the Old Man of the Mountain, the First Hassan-i Sabbah.”

When the bell of evening tolls thy name, prepare to give up thy head. Eschewing the standard Assassin role, the first of the Hassan wields a Buster-based loadout any Berserker would be proud of. With his BBBAQ deck and single target Buster Noble Phantasm, the Old Man of the Mountain functions primarily as a selfish Buster damage-dealer.

In that regard, the Old Man of the Mountain impresses with a variety of tools to support his onslaught. With a combination of Buster and Attack buffs, he can unleash impressive damage for an Assassin through either his NP or a Buster Brave Chain. Meanwhile, defensively the Old Man of the Mountain is one of the sturdiest Servants around due to an incredible Guts of up to 5000 HP, nearly impenetrable Debuff Resistance, a strong Defense Up, and self healing. As a result, his solo potential is immense.

Sadly, the Assassin class isn’t well equipped to support such an offense-oriented kit. An in-built damage modifier of 0.9x reduces the effectiveness of relying on the First Hassan as the primary damage-dealer, despite that ostensibly being his specialty. Furthermore, while his generation stats are impressive, his triple Buster card deck may make his performance inconsistent if the right card chains aren’t drawn.

Regardless, the First Hassan is an impressive non-standard Assassin damage-dealer that especially flourishes in Solo situations or in Buster-oriented Servant rosters.

The First Hassan’s relation to death features prominently in his 2 Instant Death effects: His basic attacks may randomly inflict the Instant Death condition on an enemy, or his NP can inflict Instant Death at much higher odds.

Rather than a considering it a strength or weakness, this is simply an added extra on First Hassan’s kit. It triggers too randomly and the percentages show a far rosier picture than what happens in practice. It does not trigger reliably enough to count on and may even interrupt an attack sequence meant for generating NP gauge.

After all, the Instant Death rate shown on the Servant’s NP or skills page has to be weighted against the enemy’s Instant Death Chance which ranges from 100% on common weak enemies (no hindrances) to a measly 1% or lower on any actually strong boss or Servant. The resulting chance to trigger the Instant Death on powerful enemies with First Hassan’s NP is thus around as low as getting a 4* Servant on rate up.

The King Hassan’s kit is well suited for holding the line through his numerous defensive measures. His own BBBAQ deck performs very well in solo situations and Masters can decide whether to emphasize charging his NP bar, collecting an assortment of critical stars, or simply Buster Brave Chaining the enemy into oblivion. Notably, Rider bosses are often difficult enemies due to their strength against the common Caster supports. First Hassan will ensure, by himself if need be, that Rider bosses will bite the dust.

First Hassan’s compatibility with the more commonly available Buster supports is highly useful for compensating for his Assassin-class damage modifiers. These Buster supports also typically provide the critical stars and NP generation First Hassan cannot consistently provide for himself. With his decent star weight and Independent Action passive, First Hassan can readily exploit any additional help. Assassins are often tricky to support well - but the “King Hassan” has no such boundaries.

For a swordsman with only a single Arts and Quick card each, the combination of his generation stats and hit counts is downright impressive. Packing an amazing Arts, Quick and Extra card, First Hassan can still generate a decent sum of critical stars and NP gauge if the right Command Cards are drawn. The problem is relying on the card draws to work in your favor.

The incarnation of death itself is suitably nearly impossible to encumber or defeat. Packing one of the strongest Guts skills in the game and a powerful Defense Up/Healing combination under Protection of the Faith, First Hassan can eat enemy NPs and still survive. Even enemy debuff tricks will not affect him as his own Magic Resistance, near debuff-immunity from Protection of the Faith, Charm Resistance (not immunity!), and immunity to Instant Death prevent any sort of dirty shenanigans.

The First Hassan’s biggest problem is simply his class. The 0.9x damage demerit of the Assassin class cuts deep and First Hassan ought to do more damage than he actually does, considering his steroids. Notably, First Hassan cannot provide some of the other perks the “usual” Assassin Servants have either. For example, his three single hit Buster cards are unfit for creating Critical Stars and neither does he provide powerful support or debilitating effects to help his allies. For such a damage-oriented Servant, the class demerit thus cuts deeper.

As mentioned under generation stats, while each of King Hassan’s non-Buster cards are to die for in terms of generation and hit counts, the luck of the draw decides on which turns his command cards show up. The First Hassan’s Extra card is especially juicy, but relying on drawing three of his Command Cards is too inconsistent outside of Solo situations. As a result, First Hassan’s performance can fluctuate heavily with the wrong card draws.

The Old Man of the Mountain packs some excellent skills that perform well even at base. The main trade-off to consider is whether to invest in a sturdier First Hassan, or to boost his offense first. Both Protection of the Faith and Evening Bell are high priority skills.

First Hassan is a typical Buster Servant with few opportunities to boost his NP bar, and as such prefers Craft Essences that provide Buster Performance Up or Starting NP Gauge. His own star weight is decent enough, especially with common Buster supports, that he also profits from Critical Damage Up. For one powerful NP, NP Damage Up scales the hardest with his own steroids (multiplicatively!).