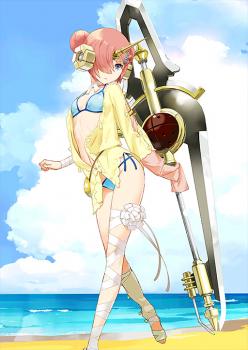 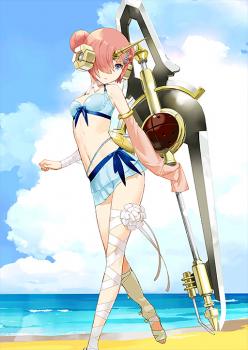 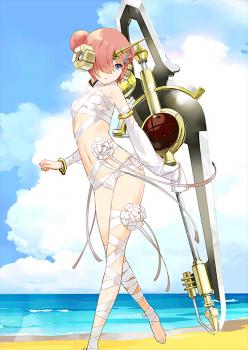 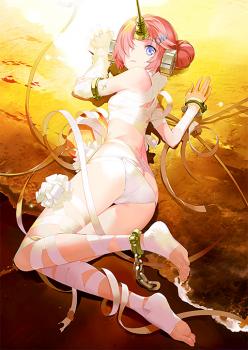 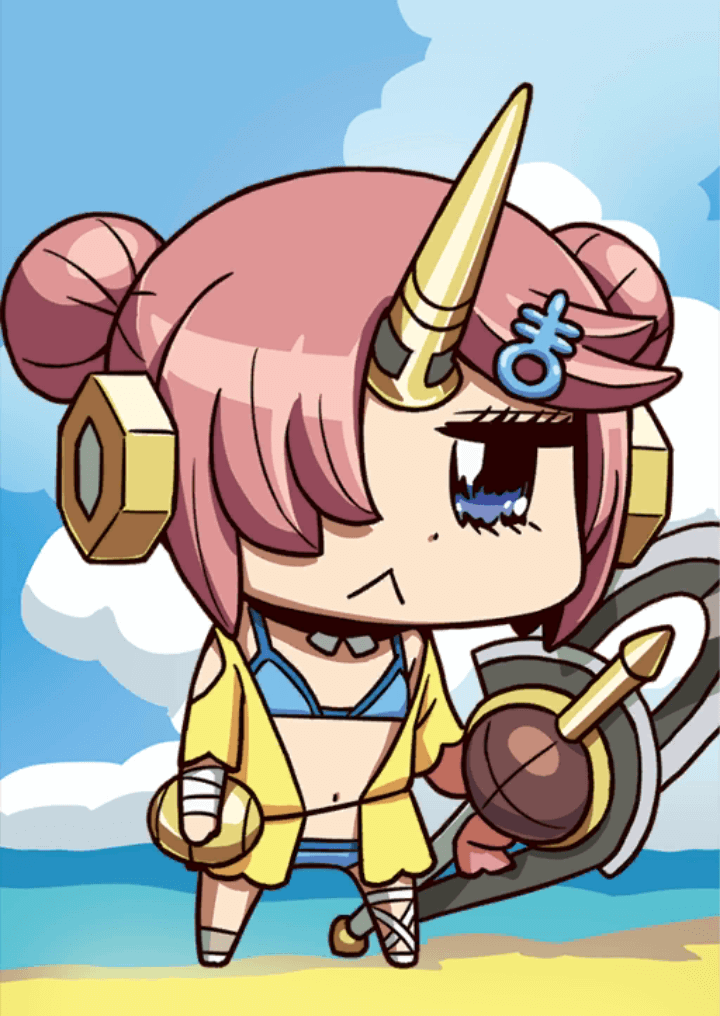 Self NP Gain Up Self NP Gauge Down [Demerit]

Self NP Damage Up Self Burn [Demerit]

Lamenting the Summer Heat A

(Can only be used when own HP is 500 or more.)
Decrease ATK for a single enemy (3 turns).
Remove Buffs from a single enemy.
Deal 500 damage to self. [Demerit]

“Frankenstein's monster. It's summer so my tone's lighter. Let’s get along, ‘kay.”

Along with her entrance to the summer race, thanks to her Saber class Frankenstein’s monster has put effort into expressing her ability to speak - and uses it to complain about the heat. As if to highlight Fran-chan’s weakness to summer, all of her skills feature some sort of demerit, but Fran’s NP Gain and utility make her one impressive single target Quick Saber.

Armed with high hit counts across the board as well as Riding EX, Fran’s already high base NP gain is brought to another level with the help of the immense NP Gain buff from Summer Galvanism. Furthermore, her decent Saber-class Star Weight allows her to make use of her Quick affinity, as she can soak up any of the decent sum of Critical Stars that she generates to further amp her NP Gain. Thus Fran is able to spam her NP Skewered Plasma Blade incredibly well, which with both Barely Loads and her Riding Ex, deals impressive damage. Lastly, Fran packs some nice utility, as her NP packs a double heaping of stun effects while Lamenting the Summer Heat’ provides the ever-useful combination of buff removal and Attack Down.

However, all of these more powerful than normal skills come at the cost of some significant demerits, the most impactful of which is Summer Galvanism’s NP Charge loss, as it directly interferes with her NP-spamming play style. Fran’s other two demerits are HP-related, which, along with her lack of hard defensive skill, makes her a relatively squishy Servant despite her second skill’s Attack Down. Her final, though very minor, weakness is that her NP’s unreliable AoE Stun may potentially mess with the timing of enemy NPs.

All in all, Frankenstein (Saber) is a solid offensive Servant who relies on her staggeringly high NP gain, and also boasts impressive utility in the form of buff removal. While her demerits and questionable survivability means that using her can be somewhat complicated, especially at NP1, they can easily be solved with the help of allies, allowing Fran-chan to shine unimpeded on the battlefield.

Frankenstein's NP Gain capability is built upon her high card hit counts, especially on her single Arts card, while her Quick cards are constantly boosted by the 12% boost of Riding EX. This solid base is further improved on through Summer Galvanism's massive NP Gain buff, and to a lesser extent, by her occasional critical hits.

Lamenting the Summer Heat reduces an enemy’s attack for three turns and allows Fran to remove all of their buffs, which makes it a very useful skill in difficult quests (particularly gimmick-heavy ones). She is also able to disrupt the enemy team’s moves through her frequently used NP’s two methods of applying Stun, consisting of a single-target high-chance Stun and a delayed AoE Stun with low chance.

Owing to her QQABB deck, good hit counts on her cards, as well as Riding EX, Fran is able to generate a decent amount of critical stars especially with further Quick and/or Star Generation buffs. Furthermore, her decent Saber-class Star Weight means that she is able to make use of these stars to some extent when paired with low Star Weight Servants.

While Fran’s HP-related demerits are relatively minor, her lack of hard defensive skills leaves a void too big to be compensated by her single-target Attack Down. As a result, she is forced to rely on defensive supports in longer fights, especially against enemies with high-damaging NPs or basic attacks.

Summer Galvanism’s NP Charge demerit makes it somewhat tricky to use, as it cannot be used on the same turn as Fran’s NP (at NP1) or when she is under 10% NP charge. Having her on at least NP2 is highly beneficial in these situations, as any spillover past 100% NP charge can be consumed by the demerit instead. Masters with Fran at NP1 will need to either think ahead or bring NP Charging support.

Fran’s delayed Stun can potentially mess with the usage of defensive skills by stunning an enemy mob during their NP turn. At the same time, its low hit chance means that it cannot be relied on either, leaving Masters with a coin flip (or a cheeky reset).

All of Fran’s skills benefit from being leveled, but as offense is her primary purpose, Masters should focus most on improving her damage output. There is some freedom in whether a Master boosts her NP Spam potential, or sheer damage first. Her Lamenting the Summer Heat meanwhile can be left at a relatively low level, but maxing it can prove to be useful in difficult quests.

With all three Damage buffs available to her, Fran has considerable freedom in which type of CE to pursue. Quick Performance Up stands out as a powerful option as NP Gain and Card Performance buffs stacks multiplicatively. Alternatively, Fran’s NP spam presents NP Damage Up CEs as natural picks as well. Hybrid Starting NP Gauge CEs are also very good on her, while in critical-oriented teams, Star Gathering Up can be equipped to allow for more consistent critical hits for her to charge her NP with.