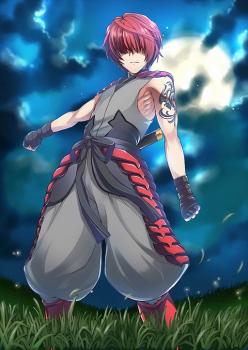 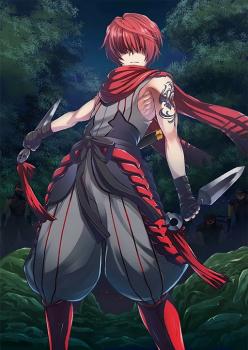 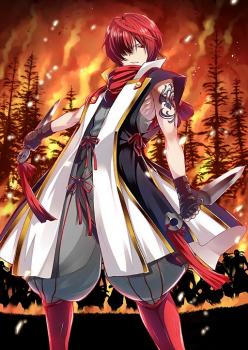 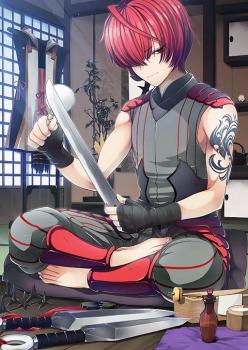 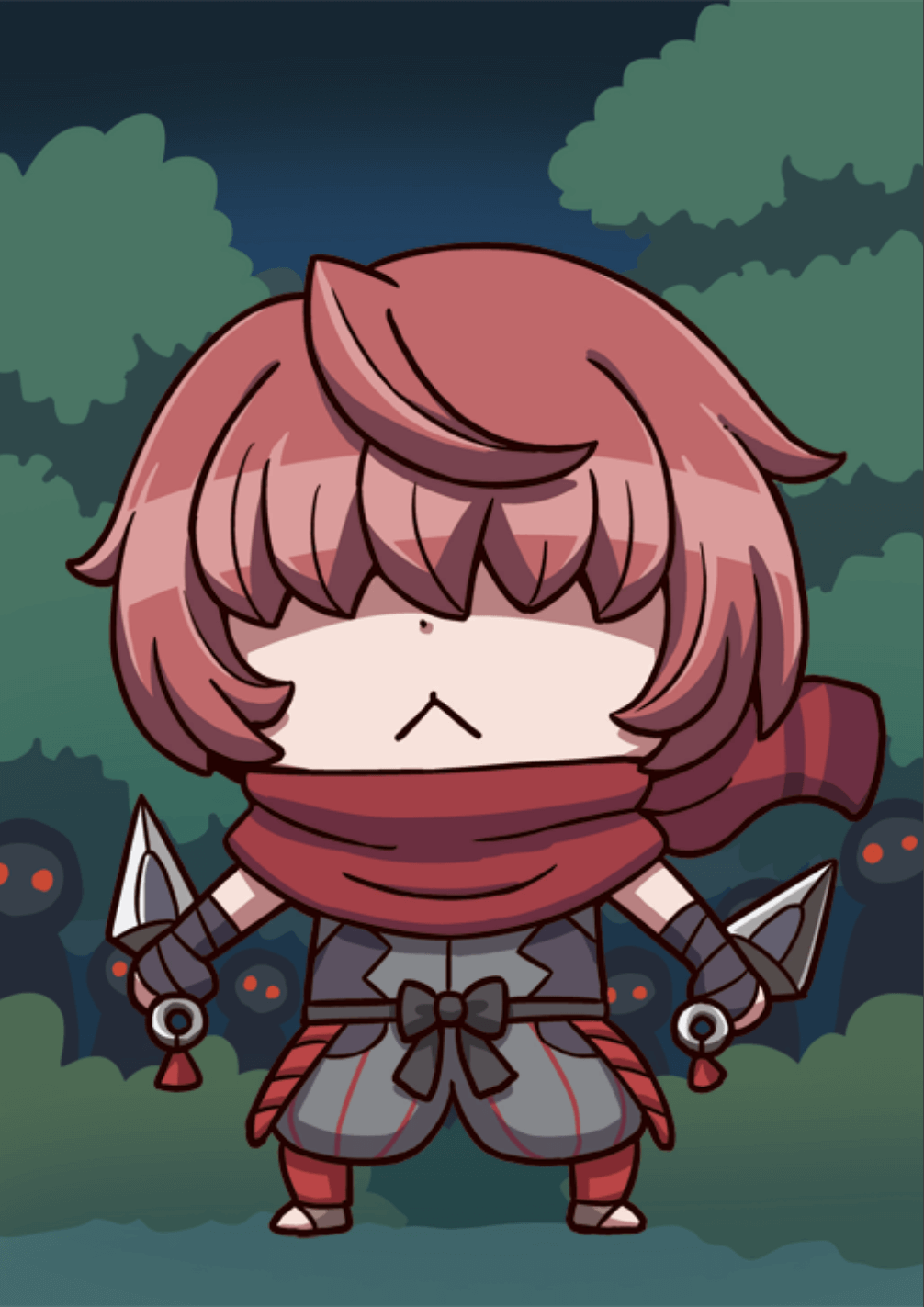 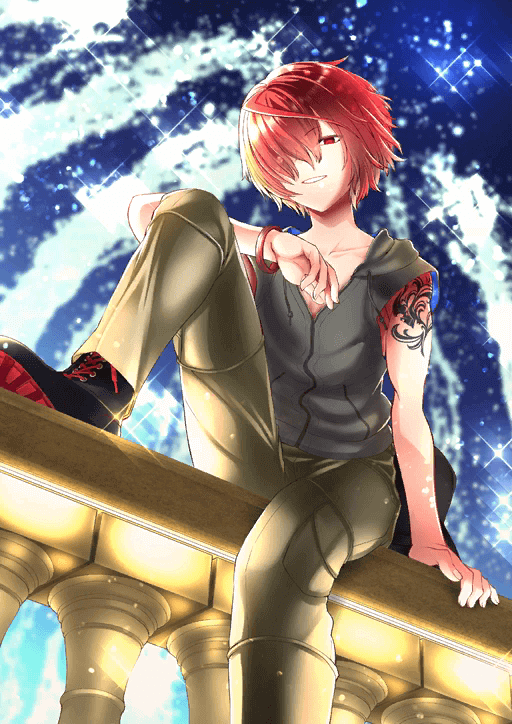 Mask of A Demon

When equipped on Fuuma Kotarou,
Increases party's Quick Card effectiveness by 15% while he is on the field.

Once a leader of a group of a rogue ninja clan made up of pirates, thieves, burglars, and brigands, Fuuma has turned from his fiendish ways to help Masters in need. While not a strong damage dealer on his own, his kit comes loaded with an array of tools to harry enemies and ensure the best result for his teammates.

Kotarou’s main strength comes from his critical star generation capacity. The combination of high hit counts on his Quick, Extra, and Noble Phantasm cards, a naturally high star generation rate, and a Presence Concealment A+ passive can provide dozens of stars, especially if Fuuma casts Ninjutsu upon himself for an additional boost in Star Generation. In addition, he’s capable of mitigating enemy damage via a 10% reduction to an enemy’s attack and reducing their Critical hit chance with Sabotage , as well as decreasing their debuff resistance up to 100% with Suspicious Shadow. Most importantly, his Ninjutsu skill provides an on-demand targetable evasion to one ally, protecting them during a key turn.

When attacking on his own, however, Kotarou struggles to hurt enemies. His kit packs no steroids before his Interlude and no damage passives either, which when combined with his 0.9x Assassin modifier, results in one of the weakest hitting AoE Noble Phantasms in the game. In addition, his QQQAB deck will hinder any significant damage from basic Commands Cards and together with his NP makes Fuuma a poor choice against powerful Rider bosses. He also tends to lack durability in practice as his only survival skill is more often than not used on other Servants.

As a Servant, Fuuma fills his role best by generating Critical Stars and providing an on demand evasion for a party member. But damage-wise, his capability remains limited to clearing low health waves with his rather rare AoE NP.

Fuuma has excellent hit counts on his Quick, Extra, and Noble Phantasm, with Immortal Chaos Brigade capable of hitting up to 15 times on a 3-mob wave. With a QQQAB deck, a Quick NP, and a decent star drop rate, he is thus more than capable of flooding the field with stars. Should a Master use his Ninjutsu on him instead of an ally, they will be rewarded with even more stars to use for critical hits.

Fuuma’s kit comes loaded with skills to mitigate enemy damage while making sure his allies’s debuff skills stick. With Sabotage, Kotarou provides a 10% Attack Down debuff and up to 20% Critical Chance Down against all enemies, helping his teammates stay alive longer. His Noble Phantasm also carries a “Disorder” debuff which provides a 30% chance to skill seal enemies each turn, potentially preventing devastating damage buffs or NP charges. To make sure Disorder actually triggers, and to help out any allies with low hit Chance debuffs (such as Charm Effects), Kotarou can use Suspicious Shadow to more or less guarantee any debuff lands.

Fuuma’s Ninjutsu gives an ally of his choice an evasion buff, eliminating potentially fatal damage. By using this before an enemy’s Noble Phantasm turn or at low health, he can keep an ally up for an extra turn. Targetable hard survival skills are rather rare after all, and Fuuma’s is not limited to 1-hit.

Even after his NP Interlude, Fuuma has one of the weakest Noble Phantasms in the game in terms of damage. With only his Post-Interlude Defense Down to draw on, Fuuma is limited in putting the hurt on via his basic Command Cards. Combined with a QQQAB deck, Fuuma is simply not built to provide damage.

In theory, Fuuma can have decent survivability with both Sabotage and an on-demand evasion. But in practice, his evasion tends to be used on his allies, making his survivability quite poor when combined with his low HP. Without any other defensive skills, enemies often make quick work of him on the battlefield.

While Fuuma can harry an enemy, he is often reliant on his allies to carry the load. His Noble Phantasm’s Disorder debuff is rather unreliable, skill sealing at low rates. His Sabotage debuffs also only stack up to 10% attack down and 20% critical Chance down at max, and he has to draw on Suspicious Shadow to trigger the Skill Seal on Disorder reliably. Masters will have to rely on his synergy with Servants with powerful debuffs with low success chance to really debilitate the enemy.

For most Masters, skill-wise, Fuuma acts mainly to provide an on-demand evasion and debuff the enemies while he’s at it. None of his skills scale particularly well, but both Sabotage and Ninjutsu benefit from additional cooldown reduction if Master use Fuuma frequently, and ought to be leveled to at least skill level 6. Suspicious Shadow will function well enough even at skill level 4, and can be left for last.

Considering Fuuma’s low damage potential, he will want to use CEs that best support his team. The main way he ought to boost his Star Generation is through Quick Up CEs as they stack multiplicatively and boost his weak damage output. Yet the best way to provide a constant stream of Critical Stars is via Passive Critical Star per Turn. Alternatively, if Fuuma is used in combination with Order Change in order to shield a critical ally with an evasion, he will often end up immediately dying by the enemy Noble Phantasm. By providing allies with beneficial effects with Entry Effect CEs or Death Effect CEs he can ensure his sacrifice does not go in vain.

Fuuma’s targetable evasion makes him a prime candidate for use with the order Change skill from the Chaldea Combat Uniform. By slotting him on the backline, Masters can Order Change him just before the enemy’s Noble Phantasm with an important Servant, and then use his targettable evasion on a second key Servant.

By doing this, two servants of the three will survive the onslaught of damage. With the correct CEs with on-death effects, such as The Merciless One, Masters can also take advantage of both his entrance and/or his death to generate more benefits for the team.

The Fuuma Clan, named after their village "Kazama," goes about their daily lives hunting, logging, and farming.
But when it is time for a mission, they are feared as Fuuma, the Evil Wind.
Fuuma Kotarou is the fifth leader of the clan, serving Ujitsuna, successor of Hojo Soun.

Unlike the Iga and Koga, those quintessential Japanese ninja, few literary references of the Fuuma exist. The death of their lord, Hojo Soun, serves as a major reason. No one even knows the type of weapons Fuuma specialized in.

The same is true of their origins; it is unclear what series of events led to them settling in Kazama Valley. One theory proposes that they are descendants of horseback tribes from the mainland.
The Fuuma never revealed their origins. In any event, they were feared by all due to their ferocious group tactics. And their leader was Fuuma Kotarou.

Instead of calling this Fuuma Kotarou's Noble Phantasm, this is more like the Noble Phantasm of the Fuuma Ninja.
Summons the spirits of 200 Fuuma Ninja, turns the area surrounding the enemy into pure darkness, and then knocks them down straight to Hell. This is based off the tale of Kotarou leading 200 ninja into the Takeda base, killing injured soldiers and burning all their rations. Due to the continuous ambushes, the Takeda soldiers had no choice but to retreat.

Foreign blood flows in Kotarou's veins, as does the blood of oni. Due to the Fuuma Clan's breeding programs, the ultimate ninja who can survive the harsh conditions of the Warring States was born.
He was born a chief, a ninja, and someone who would lead the Fuuma Clan to its prime.

...However, Kotarou is kind and gentle by nature. Although his body is that of an ultimate ninja, his personality is not fit to be one. It is said he spent most of his time in his own room.

Second Noble Phantasm: "Shift into Interminable Evil."
Details unknown. The Fuuma Kotarou written in the "Hojo Godaiki" is said to possess the above characteristic.