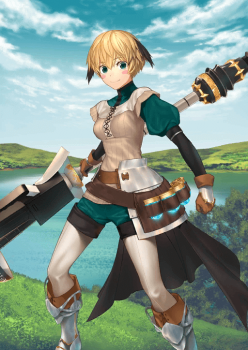 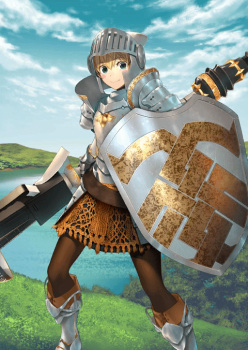 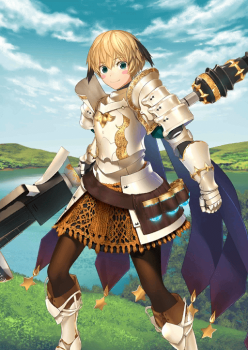 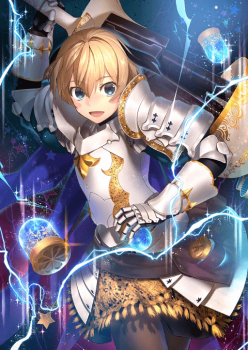 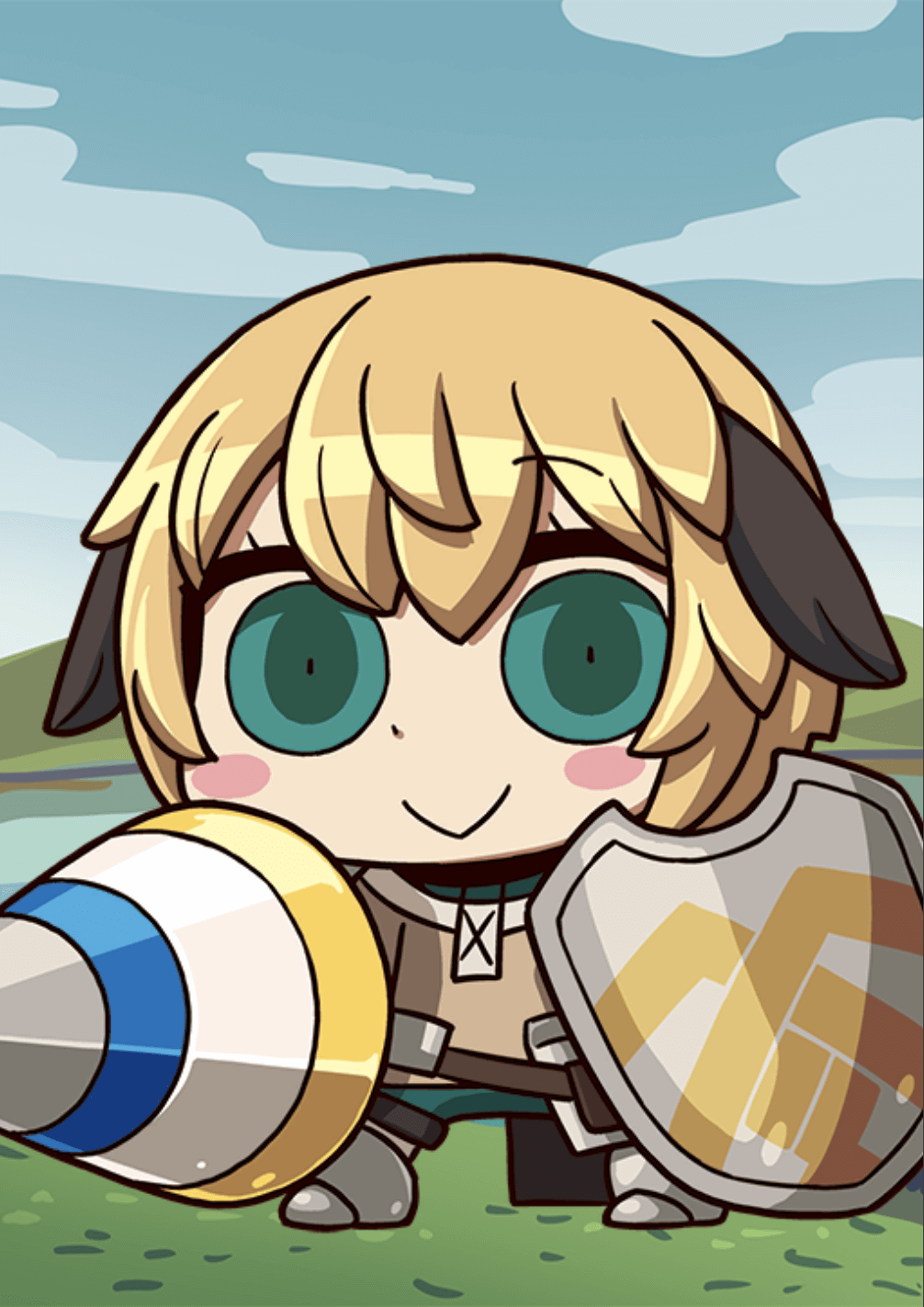 The Wolf Never Sleeps B++

Gareth of the Beautiful Hands B

Increase own NP Gauge.
Increase own ATK (1 time, 5 turns) when attacked by an enemy (3 turns).

Ring of Transformation B

When equipped on Gareth,
Increase all allies' Buster Card effectiveness by 10% and Critical Damage by 15% when she is on the field.

“Seventh Seat of the Round Table, Gareth, marching forth!”

Sir Gareth, one of the Knights of the Round Table, and nephew (or niece, in this case) of Altria, is one of the bronze Servants introduced during the fourth Anniversary. She is a single target Buster Lancer with a somewhat defense-oriented skill set.

Gareth has the ability to draw enemy focus for a turn with Ring of Transformation, while also increasing her own defense and NP gain. She additionally has a Guts skill with Battle Continuation, giving her the ability to survive a bit longer as she draws enemy fire. She can take advantage of the enemy's attention with her second skill, Gareth of the Beautiful Hands, which grants her a 1-time, 5-turn attack bonus every time she is attacked for the next three turns, which can stack repeatedly so long as she does not use a card or NP during that time. In addition, she comes with a self NP charge, which along with the decent hit counts on her Arts and Quick Cards, plus her NP gain buff, gives her quicker access to her NP. Her Buster NP, Ira Lupus, applies the ever-handy Ignore Invincible effect before dealing damage to a single enemy, ensuring damage in the face of both Evade and Invincibility buffs. The NP also will inflict a defense debuff that scales with overcharge. When she receives her upgrade, her Guts skill will additionally grant a smattering of Stars and give her increased Critical Strength, further improving her damage output.

Her greatest weakness, perhaps, is that her low rarity brings with it lower base stats. She ranks among the highest Max HP of her rarity, although in exchange, her ATK is among the lowest. Also, despite having high Max HP for a two-star Servant, among the entire roster, her HP is still rather meager. Her damage is most effective after taking multiple hits from enemies, and this can be difficult to set up with her lower HP pool.

Overall, Gareth is still a very decent budget ST Buster Lancer option, especially given the fact that ST Buster Lancers are few and far between, particularly among free or easily accessible options. Gareth excels particularly well in certain solo situations, or in team compositions that can provide her with additional healing or even allies that can grant her additional turns of Target Focus. With proper investment and team building, the enthusiastic knight will serve Masters well.

Having easy access to a Servant with the Ignore Invincible effect in the Friend Point summoning pool is a nice thing to have, particularly for newer Masters with underdeveloped rosters. Being a Lancer, Gareth has class advantage against Archers, and numerous Archer-class enemy Servants often have Evade skills that can be circumvented with Gareth's NP.

Gareth is one of the first Servants in the roster to be capable of gaining progressive ATK buffs when taking damage from enemies. In combination with her Target Focus skill, she can draw enemy fire away from allies while boosting her own damage at the same time. It should be noted, however, that the ATK buffs will be used up the next time Gareth attacks with a card or NP. Saving the ATK buffs for Gareth's NP turn is usually the most effective method of using up the ATK buffs.

With a self 20% NP Gauge charge at max skill level, and a self NP Gain buff of up to 20% (albeit for one turn), Gareth has a decent number of tools in her kit to help her access her NP more quickly. In addition, her Arts, Quick, and Extra cards each have a decent number of hits, allowing Gareth to gain NP Gauge from her card rather quickly. After her skill upgrade, with the assistance of Crits and her buffs, she can nearly fill her NP Gauge in a single turn from an AQQ combo alone.

As with most Bronze Servants, Gareth's performance ceiling is somewhat hampered by her Bronze Servant status, which naturally will come with lower stat caps, even with grailing. Her HP is notably high for a 2 star, although still below average for the roster in general given her rarity. Her ATK stat is very low as well, which makes her damage output rather low without support.

Gareth's second skill grants an ability that lasts for three turns, where upon getting attacked by an enemy she gains an attack buff of up to 20% that will last 1 time, 5 turns. This buff can stack, which at max would be up to 9 stacks of +180% ATK total. Unfortunately this buff will be used up by any Card that Gareth next uses, which can lead to the Master needing to avoid using Gareth's Cards if trying to maximize her damage. Additionally, this buff is contingent upon Gareth getting hit by the enemy, and although she has a Taunt and Guts skill, the Taunt lasts only 1 turn, so the other 2 turns can only be consistently maximized with external help (Support, CE). If running Gareth solo, making sure enemies hit her is less of an issue, although this runs into the separate problem of the ATK buff being consumed too quickly due her cards being the only ones available. It is rather difficult for Gareth to reach her true performance ceiling in most practical situations as a result.

Gareth's second and third skills are more effective leveling choices, particularly before her upgrade arrives. Maxing the second skill for the NP charge is only suggested for Masters who plan to use Gareth frequently. For other skills, reaching the max level is entirely optional, although doing so will increase her effectiveness and survivability on the field/

Gareth benefits from Craft Essences that can either provide additional NP Gauge, NP Damage, or Buster Performance buffs, if building her offensively. If attempting to build a team to maximize how much she can stack her ATK buffs, bringing Target Focus CEs is also an option, giving her an additional turn of enemy focus.