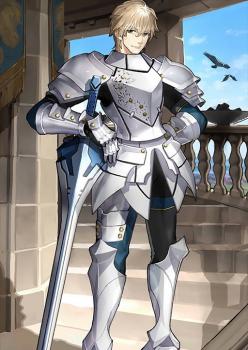 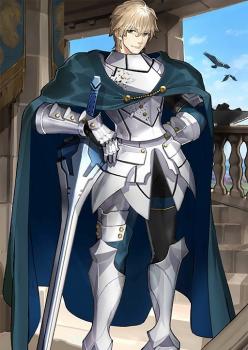 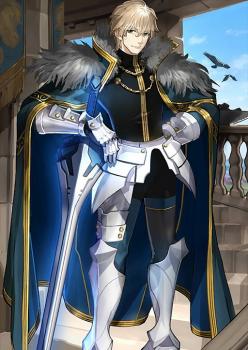 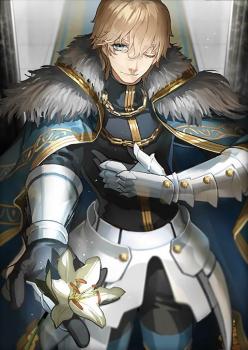 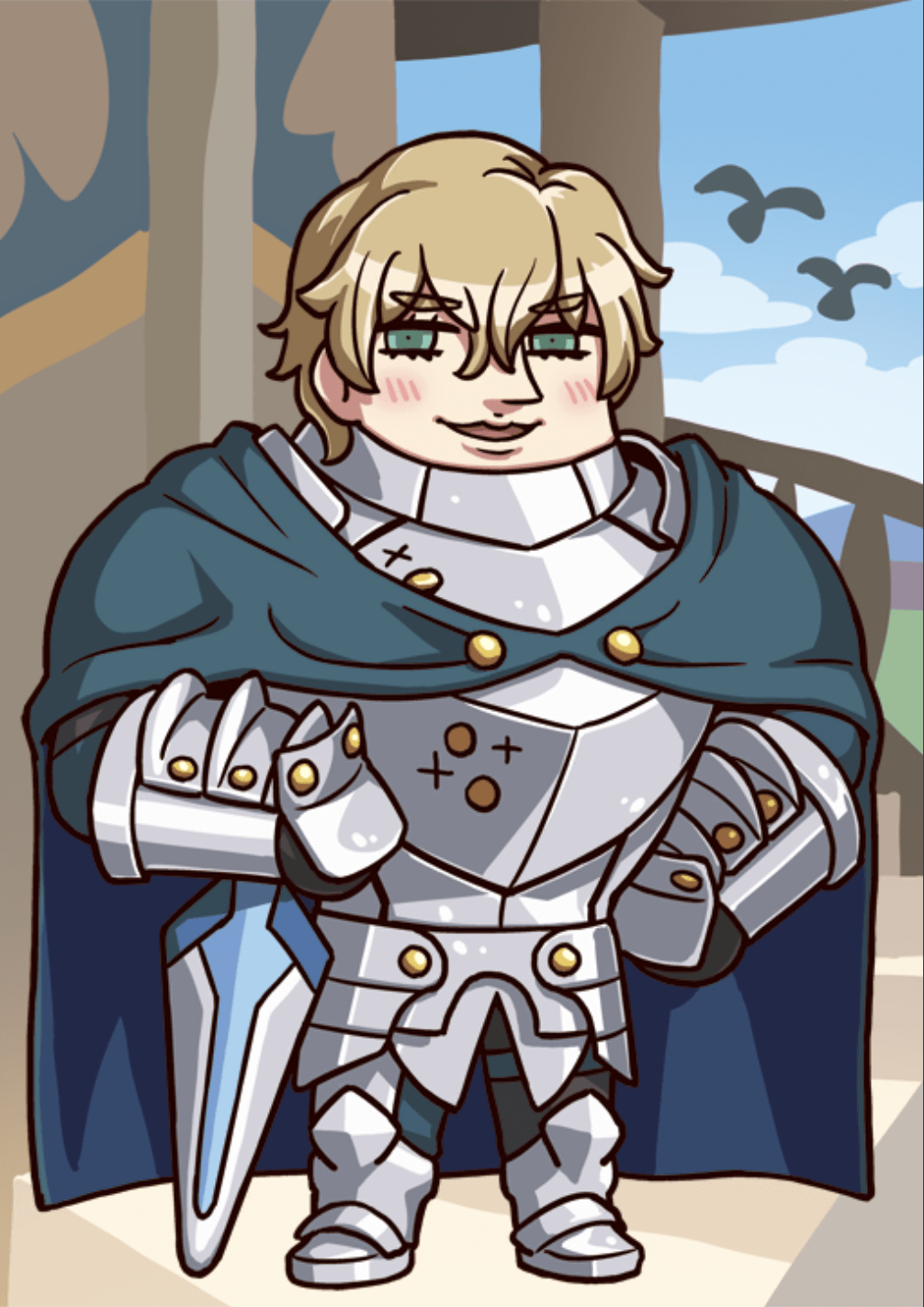 Self Buster Up Field Bonus

Numeral of the Saint EX

Increase ATK for all allies (3 turns).
Apply [Sunlight] field status to self (1 turn).

Deals damage to all enemies.
Inflicts Skill Seal for all enemies (1 turn).

Apply Burn for all enemies (5 turns).

The Reborn Sword of Victory

When equipped on Gawain,
Increases party's Buster Card effectiveness by 15% while he is on the field.

“On my name as the Knight of the Sun, I shall deliver victory to you.”

The wielder of the Sword of the Sun, and a fiercely loyal member of the Knights of the Round Table, Gawain is a dedicated AoE Buster damage dealer who excels in — guess what — sunny fields.

Gawain’s offensive might stems from his high ATK stat, triple Buster deck, and multiple offensive buffs. Most notably, his signature Numeral of the Saint grants a bonus (up to 30%) Buster buff on sunny stages, a location condition that becomes easily accessible after his Rank Up skill Nightless Charisma adds the Sun condition to any stage. Considering Numeral of the Saint and Charisma already include a standard unconditional Attack buff, his overall buff stacking on his four Buster cards (including NP) on sunny stages is suitably impressive. Meanwhile, Belt of Bertilak’s flat 20% NP charge allows him to perform turn 1 NPs, which makes him a decent farming option against weaker waves with Excalibur Galatine. As an added bonus, his NP also inflicts Skill Seal and Burn, offering a bit of utility to the team.

Unfortunately, his NP Damage outside of sunny stages leaves much to be desired. With neither his Buster buff to draw on nor an NP Upgrade to bolster his output, Gawain’s NP ranks among the weakest of AoE Sabers. Even with his Buster buff, his NP Damage merely catches up to his main competition. In addition, with his BBBAQ deck making it more difficult to charge his NP, Gawain is unlikely to be able to spam his NP. The Knight of the Sun’s final weakness lies in his survivability as his sole survivability rests on an unwieldy 1-turn Guts that is tied to his NP charge, one which ideally is used offensively.

Overall, Gawain is a decent Buster-centric AoE damage dealer, whose overall kit is hamstrung by his reliance on stages with the Sun condition. Fortunately, his Rank Up alleviates his main limitations and shapes him into the respectable Buster Gorilla he is meant to be. Gawain may not be perfect, but when he shines, he scorches.

Gawain has three Buster cards in his deck, a Buster AoE NP, self / party Attack buffs, and he also gains an additional Buster buff in sunny fields (which after his Rank Up he can always force). With all his buffs active, his Buster cards become devastating for three turns, and with four of them in his deck, he is able to form Buster chains (especially NP-B-B ones) with relative ease.

Gawain’s Belt of Bertilak charges his NP Gauge by 20%, which allows him to NP right off the bat with a Kaleidoscope. This is a huge boon considering his single Arts cards, and it also greatly aids Gawain in terms of farming, allowing him to make short work of weaker mobs right off the bat.

Skill Seal and Burn on NP

Gawain can inflict the Skill Seal status on all enemies for 1 turn with his NP, preventing the use of troublesome skills such as Evade/Invincibility, Stuns, Guts, or NP gauge drain. Additionally, Excalibur Galatine also applies a Burn effect to its target, which scales pretty decently with Overcharge. While normally not very impactful, the burn’s high base damage can be useful for stages with immense damage reduction when combined with Burn Damage Up effects from other Servants such as Archer of Inferno.

While Excalibur Galatine deals respectable, if not outstanding damage when Gawain’s 30% sunny Buster buff is active, its damage is reduced to the point of underperformance without it. Thankfully, his Charisma’s Rank Up into Nightless Charisma lets Gawain treat any field as sunny for 1 turn (and thereby giving him access to the Buster buff), allowing him to temporarily bring out his full potential on any stage.

Although Gawain has some survivability built into his kit in the form of Guts on his third skill, the Guts only lasts for 1 turn, which can make using it a bit of a gamble if the enemies choose not to attack him. His Guts is also tied to his 20% NP gauge charge skill, which means that he is often forced to choose between having his NP ready earlier, or reserve the Guts to bail him out when the situation calls for it.

Outside of Belt of Bertilak’s 20% NP Charge, Gawain has limited means to charge his NP Gauge by himself. While his high base NP Gain means that his Brave chains —  if started with an Arts cards — are able to provide him with considerable NP charge, Gawain’s “gorilla” BBBAQ deck means that such an occurrence is far and few between, and it also prevents him from having reliable access to Arts chains.

Maxing any of Gawain’s skills is not necessary for him to perform his job, as some of the most important effects of his skills are flat across levels.  At the same time, all of Gawain’s skills improve his overall performance in small ways, but the cooldown reduction is especially helpful after his Rank Up shores up his overall performance. His skills ought to be leveled if Masters enjoy using him and wish to optimize his performance.

Due to his ability to NP Charge and quickly roast a wave, Gawain benefits greatly from Craft Essences with Starting NP Gauge. Alternatively, he can pump up his damage with Buster Performance Up or NP Damage Up effects. With a potential Buster Performance buff of his own on sunny stages, NP Damage will scale harder for his NP, but naturally does nothing to improve his Buster chains.