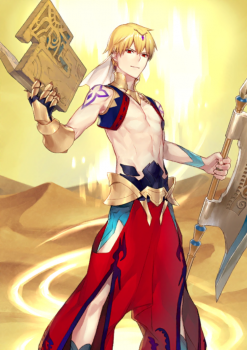 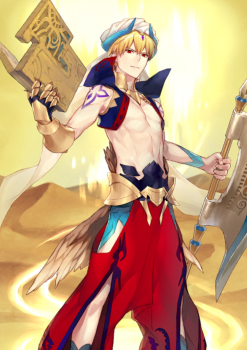 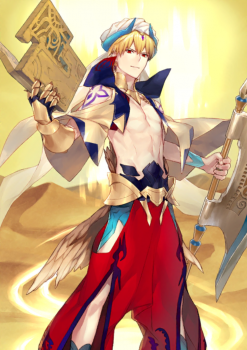 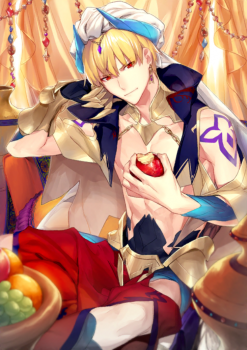 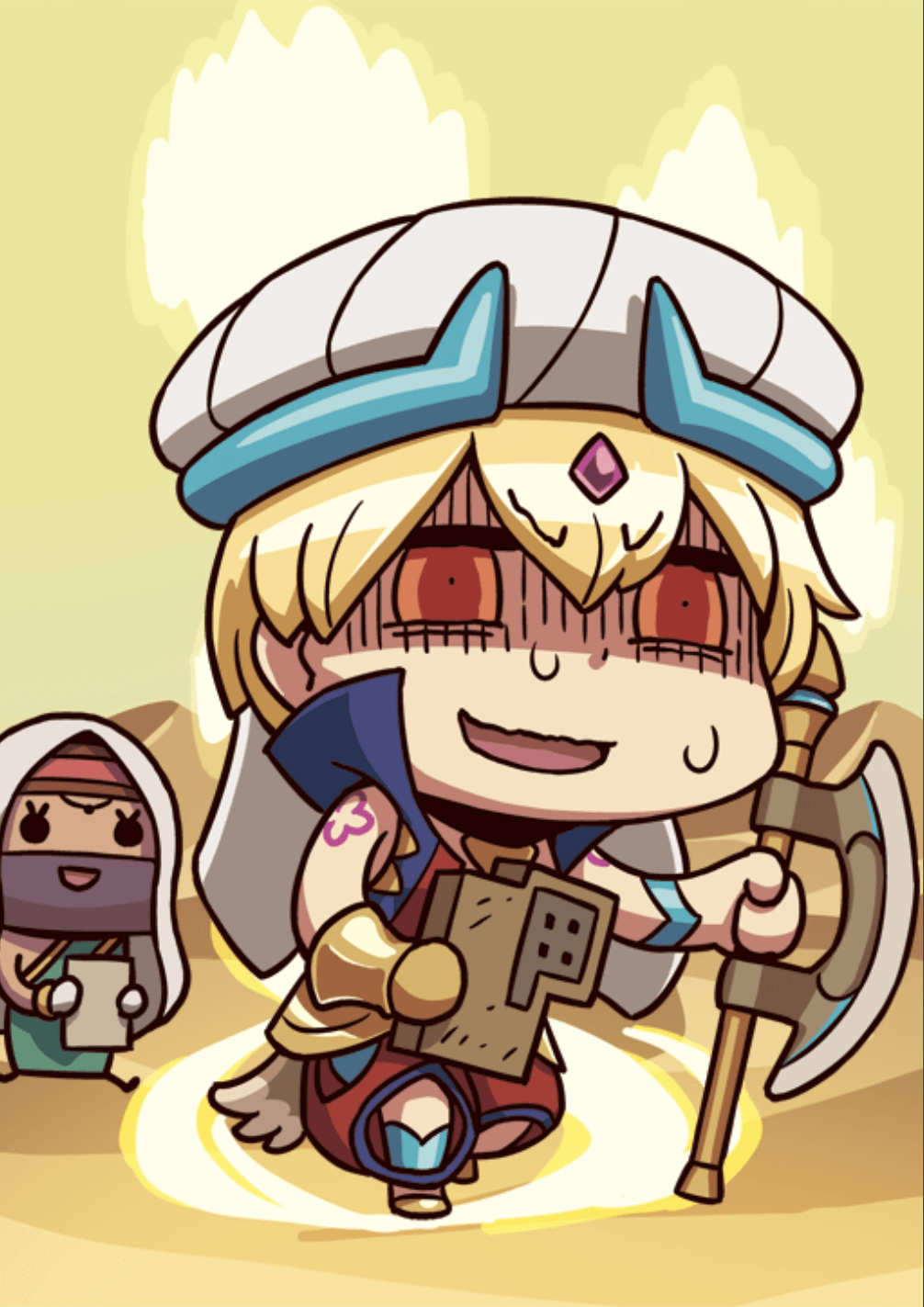 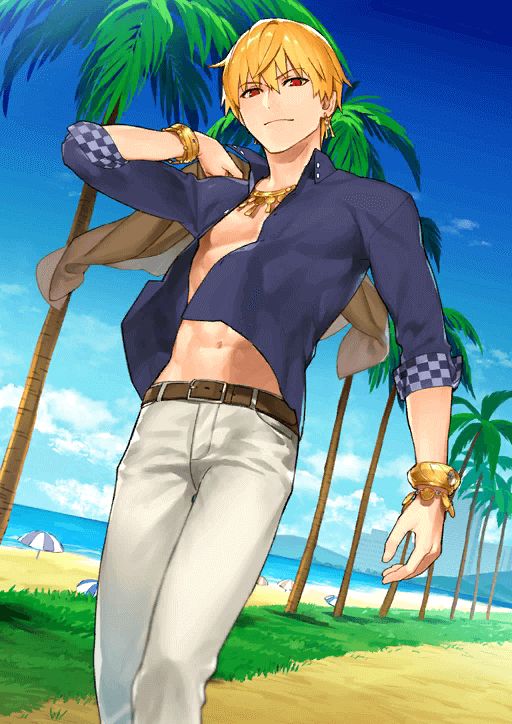 Deal heavy damage to all enemies.
Increase DEF for all allies by 20% (3 turns).

When equipped on Gilgamesh (Caster),
Increases party's NP Strength by 20% while he is on the field.

Reflecting his change in personality (and choice of arsenal), the Wise King of Uruk trades his Archer self’s sheer damage potential for massive team support capability. In this guise Gilgamesh (Caster) hosts an incredible array of support buffs for the entire party in the form of Star Generation Up, DEF Up, ATK Up, Arts Performance Up, Debuff Success Rate Up, and DEF Down on enemies. His Star Generation Up in particular is a rare find, as it allows reliable star generation via multi-hit Arts cards, addressing one of the core weaknesses of Arts-oriented critical teams. However, unlike his pure support cousins Gilgamesh (Caster) still benefits from his own buffs, allowing him to fill in as a hybrid damage dealer when the situation calls for it.

Due to his focus on party buffs, Gilgamesh (Caster) does need a party that is able to capitalize on the support in his kit, as his effectiveness decreases greatly otherwise. While still a decent Arts damage support, he finds himself hard-pressed to gain NP without frequent Arts chains, partially due to the fact that his already mediocre NP gain is further halved on his multi-hit NP. His defense buffs are also tied to said NP and by themselves not enough to sustain a whole team. Furthermore, he has relatively long skill cooldowns, which can pose a major problem in longer fights where properly rotating the party’s skills becomes an important factor.

All things considered, Gilgamesh (Caster) is a Servant who shines in carefully crafted (Arts) teams, but using him thoughtlessly wastes much of the Wise King’s potential. He excels particularly at offensively supporting Arts critical Servants, but can also fit into semi-stall teams as a damage dealer.

Gilgamesh’s various buffs work best in an Arts team, and heavily benefit all of his Arts-oriented allies (even supports). His NP also comes with a built-in DEF Up, allowing him to increase the team’s overall durability, as well as making it easier to pull off Defense-stacking strategies. Finally, the Debuff Success Rate buff granted by Sovereign of Magical Staff allows debuff oriented Servants (such as Shuten Douji) access to their full potential, a rare niche among support Servants.

Gilgamesh is unique among Arts Servants in that his King’s Return A skill allows considerable amounts of critical stars to be generated from high hit count cards (most notably his own Arts, Buster and NP, Melammu Dingir). This capability is particularly valuable for Arts-based critical Servants, such as Nursery Rhyme and Li Shuwen, providing them with a reliable source of critical stars. NP-spamming Servants such as Nero Claudius (Bride) and Altria Pendragon (Archer) also benefit greatly from this niche, as critical hits increase both their damage and overall NP gain. The importance of this niche is made even more apparent in events where farming CEs have to be used instead of Fragments of 2030.

Gilgamesh benefits from his own offensive buffs, making him a decent Arts-oriented damage dealer in a pinch. While he has little in the way of burst damage (due to his Arts deck and Casters’ 0.9x damage modifier), he is capable of dealing consistent damage via his NP and critical hits. Gilgamesh’s damage dealing potential fits particularly well in stall oriented teams, as Sovereign of Magical Staff’s Arts Performance Up allows the team’s defensive NPs to be charged faster, further augmenting the team’s defenses alongside Melammu Dingir’s DEF Up.

Similar to other hybrid Servants, Gilgamesh (Caster)’s kit has no single overwhelmingly powerful element - the Wise King’s excellence comes from having everything in a single package. As a result, his performance suffers when the team cannot make the most of his various aids. In teams without sufficient Arts cards, Gilgamesh’s average NP gain and his resulting reliance on Arts chains also makes it difficult to charge his NP consistently. Lastly, it should be noted that the King benefits considerably from Critical Damage Up, which scales really well with his own buffs.

Gilgamesh’s AoE NP, singular Buster card, and Casters’ 0.9x damage modifier means that he may be unable to focus down highly threatening targets on short notice. In such a situation, making use of Gilgamesh (Caster)’s Arts and DEF buffs to help with the party’s defensive capabilities can be crucial.

Gilgamesh (Caster) has relatively long skill cooldowns, which can make his skills unavailable at critical points. Even at max skill level, his critical star generation buff is only active less than half the time, and when his skills are unmaxed, using Gilgamesh is far less enticing.

While Sovereign of Magical Staff EX is undisputedly his highest-priority skill, an argument can be made for either Charisma A+ and King’s Return A to be leveled above the other, with Charisma being the safer pick overall.

Gilgamesh (Caster)’s Craft Essence pick depends on whether he is used as a primary damage dealer, or more as a support. These choices generally revolve around NP Damage Up, Starting NP, and passive Star Generation effects.