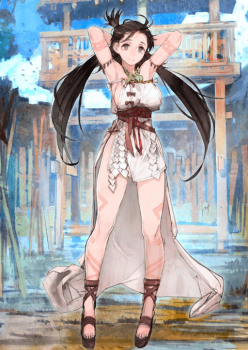 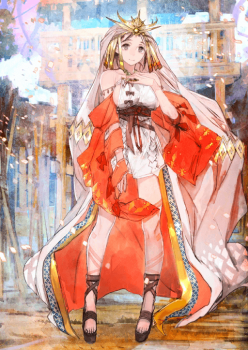 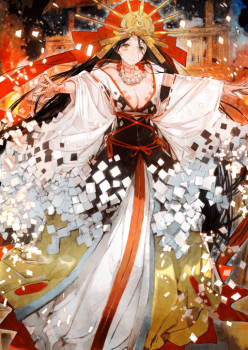 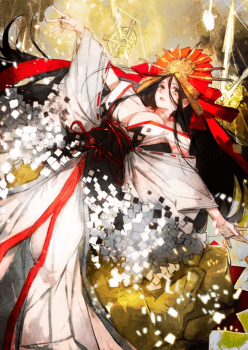 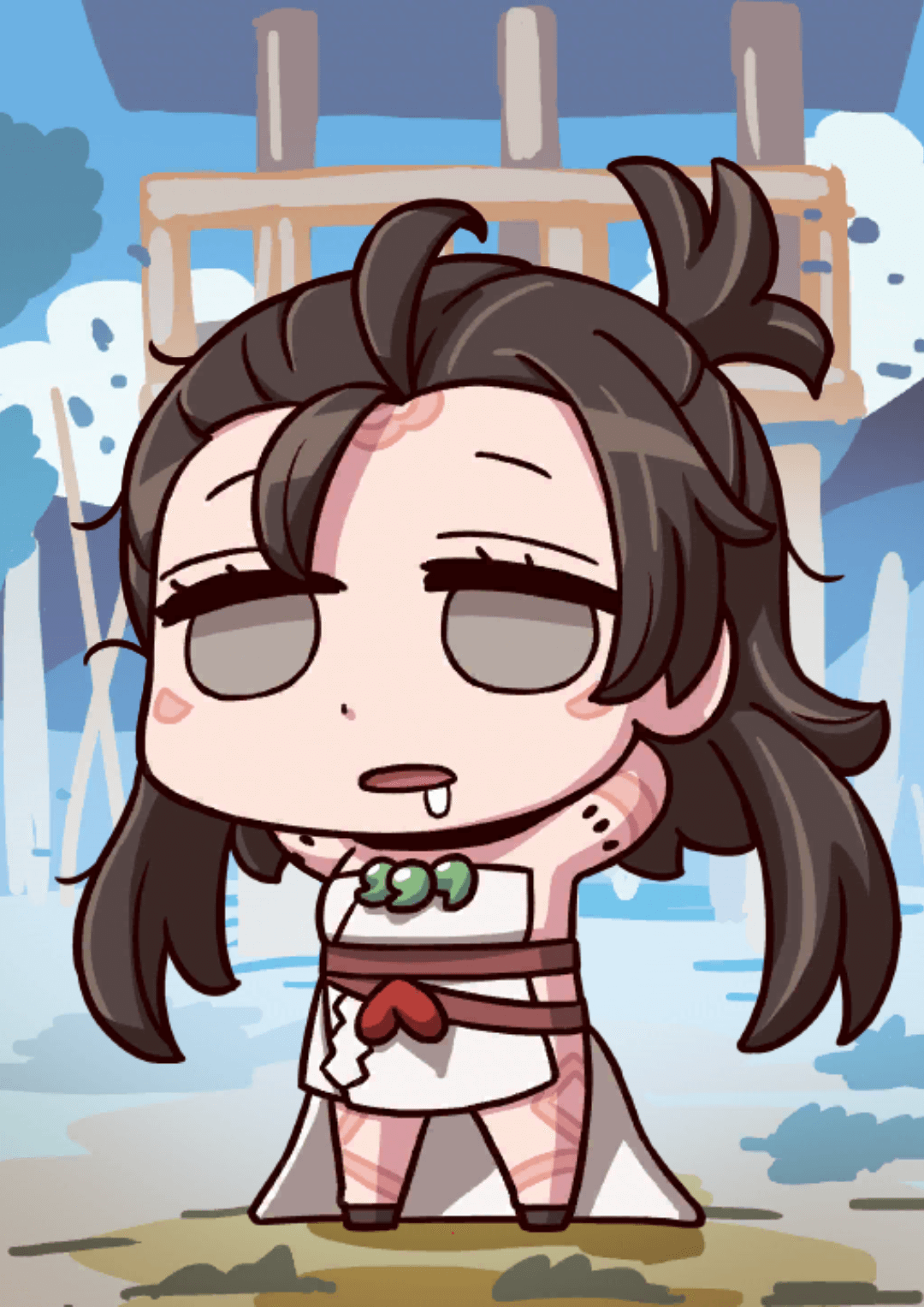 Self Crit Damage Up (Buster)

Oracle of Light A

Apply Poison and Curse Immune to self.

Eternal Mirrors Epitomizing the Stars B

When equipped on Himiko,
Increase all allies Buster cards effectiveness by 10% and Critical Damage by 15% while she is on the field.

After a dry summer, Himiko has decided to come around to bring the rain for us: something which always seems to happen whenever she steps outside. As a Servant, she is a Buster Critical Support Stalling servant meant to whittle down an enemy’s HP while keeping herself alive.

Himiko’s main attribute comes from her ability to stall. Kidou gives her an invincibility to help with this, along with having a high HP value combined with her Ruler typing. Her Overcharge skill, however, makes her a must have in stall compositions: more on that later. She’s also a pretty significant support, providing Buster up for the party on her Noble Phantasm and an attack up for the party on Shrine Maiden’s Charisma. Her Criticals on Buster cards also pack quite the punch with help from Oracle of Light and its star gather and damage burst. We also shouldn’t fail to mention that she has easy access to her Noble Phantasm with Oracle of Light’s 50% charge!

On the flip side, Himiko really has to stall. Her kit is primarily oriented around stalling and requires NP charge to truly support others. Without access to a damaging Noble Phantasm, she’ll never quite have the burst of some other Servants. Additionally, her NP gain outside of her self charge can be a bit lacking.

Himiko is for Masters undergoing a challenging quest who need a way to win by survival, and is top-notch in the role. But the real reason Master’s should roll for her: She’s voiced by Tamura Yukari.

Himiko at first glance is a decent staller, capable of invincibility one turn out of six with a beefy HP pool and Ruler typing. But her hidden power comes from her Overcharge effect on her Noble Phantasm. If grouped with a Castoria, this changes Anti-Enforcement Defense from a 1-hit defense to a 3-hit one. Paired with Castoria’s invincibility skills and Himiko’s own invincibility, this leads to a true stall possibility. Add in another Castoria (for more invincibility), or Merlin (to give a team-wide invincibility as well as HP recovery) and the team becomes extremely difficult to take down.

Himiko is oriented to support the party, giving them all extended uses of Buster Up and Critical Up on her Noble Phantasm, as well as her skills offering Attack Up. As a beefy character, she can also take hits quite well for the rest of the team.

Himiko has many things going for her in terms of support, but she also enjoys a healthy burst of Crits when needed. Thanks to Oracle of Light, her Buster cards enjoy both star absorption and critical damage for a turn, and if running with a certain wizard they could gain even more massive hits even despite her Ruler Classing.

Most of Himiko’s support potential comes from her Noble Phantasm. It should be not questioned, but this Noble Phantasm is mainly meant to help Buster oriented Servants. As Buster setups often do not have much in the way of Noble Phantasm gauge charging, she might have a hard time slotting in to do her support role.

Without Critical hits, Himiko will not be able to do relevant damage. Her Noble Phantasm is entirely support based, so it’ll be hard to get that one big hit in.

Despite having a nice 50% charge skill, Himiko’s NP gain is mediocre with only a 4-hit Quick and 5-hit extra card. Not a great attribute to have when you Noble Phantasm is your big attractor.

There are three potential uses for Himiko: Stalling, Crit bursts with Himiko, and Support. Her first skill is mainly used in support setups to help the party’s attack, while her second is more used in Crit Bursts. Her third is used in all for its gauge charge. All setups should level the third skill first, and those preferring her for support should go 1->2 while all others should go 2->1.

Himiko is a diverse character; so many possible CEs could help her based on what role she is meant to take. Starting NP Gauge CEs help with getting her support out as quickly as possible, while NP Gauge Per Turn CEs ensure it is available frequently in stall setups. She also could benefit from a Stars Per Turn setup to increase the likelihood of her critical hits. Her Max Bond CE also benefits her support capacity.

The queen of Yamataikoku, a civilization believed to have existed in ancient Japan. It is said that she used a kind of magecraft known as kidou to beguile the people into accepting her rule.

The nation of Wa (located in what is now Kyushu) had split into many small nations, constantly at war with one another until the mysterious queen appeared suddenly and unified the nation using the power of the oracle.

Himiko took up residence in the innermost part of a giant shrine, and she never showed herself to the public. It was her unnamed brother who brought her words to the citizens of Yamataikoku.

As queen, she engaged in international diplomacy, sending envoys to the nation of Wei, and she was even granted the title of Shingi Wao (King of Wa). But soon after Himiko's death, with records of her disciple, Iyo, comprising the final entries of its history, Yamataikoku abruptly disappeared. Even today, the nation of Yamataikoku remains a mystery. Even its location has never been definitively identified.

"I couldn't go out of my own free will once I became queen, so I honestly don't know what really happened."

At first glance, she seems to be a cheerful, energetic girl, but the Mystic powers within her are impressive enough that they live up to the belief that she was the ruler of light. At times, she wielded her powers using her oracle, and at other times she simply used brute strength... Er, never mind. Let's just say that she settled many conflicts in many ways. It's hard to know how she behaved as queen, but she is a kindhearted girl who takes joy in living with nature, and she enjoys the blessings of sunlight, the fruits of the earth, and the smiles of her people. Yet for some reason, she has the uncanny power to summon rain. It rained every time she tried to go out, and so ultimately she was also cherished as a rain-making shrine maiden.

"Ugh. Rain again. Why does it always pour whenever I try to go outside? Huh? That helps the crops grow? Fine, fine. Just don't forget to build your buildings with raised floors."

Also, her signature move is...a punch, strengthened by her numerous bone-breaking divinations, which is the greatest secret to come out of Yamataikoku.

Kidou: A
A primitive form of magecraft. It's also said to be the archetype for Shintoism. Unlike the structured magecraft system, details of it remain shrouded in mystery.

Oracle of Light: A
A skill that enables one to use oracles to guide people to a bright future. She may look like she's just dozing off, but that's only your imagination.

Shrine Maiden's Charisma: B
The natural talent to command armies. It increases the abilities of her army while it is engaged in combat. As Charisma is a rare talent, a B rank of this skill is said to be enough for the king of a nation. Himiko's Charisma is an effective means of governing her people through oracles.

Primitive Body: A
A supernaturally healthy body that knows neither illness nor injury. It is truly an outstanding, healthy body overflowing with life, just like that which primitive man possessed. As a side note, the body will feel sluggish if it gets lazy, and the figure will also change if one eats too much. So it's a primitive body in that sense as well.

Seishin Katadoru Kyuen-kyo.
A Noble Phantasm that reaches into a realm no human may touch to gain wisdom beyond mortal ken. Upon its True Name release, numerous mirrors surround the area, providing a wide variety of information from different time periods and domains. She then uses her own body as a medium to observe the near future.

Additionally, when Himiko's Noble Phantasm is deployed, a mysterious wave is emitted to invigorate the primitive human powers of her surrounding allies.

When it's deployed at its maximum power, it becomes possible to alter the results of her predictions, though only in small ways.

Himiko thought this was the voice of heaven, but even she did not truly understand what the act of hearing the oracle meant. As a side note, the voices of heaven never gave her any direction on who her soulmate might be.

"(Sigh). I know everything about everyone, but nothing about myself. What did Himiko do to deserve this?"