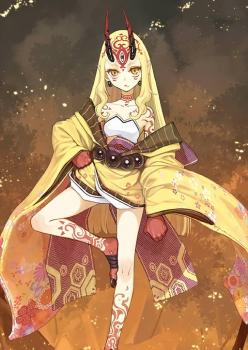 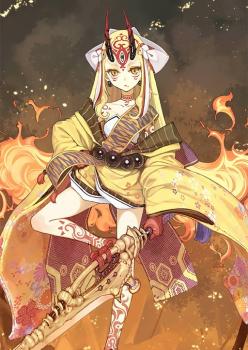 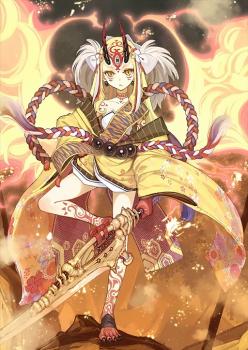 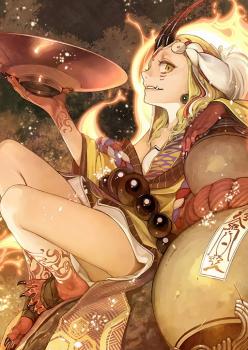 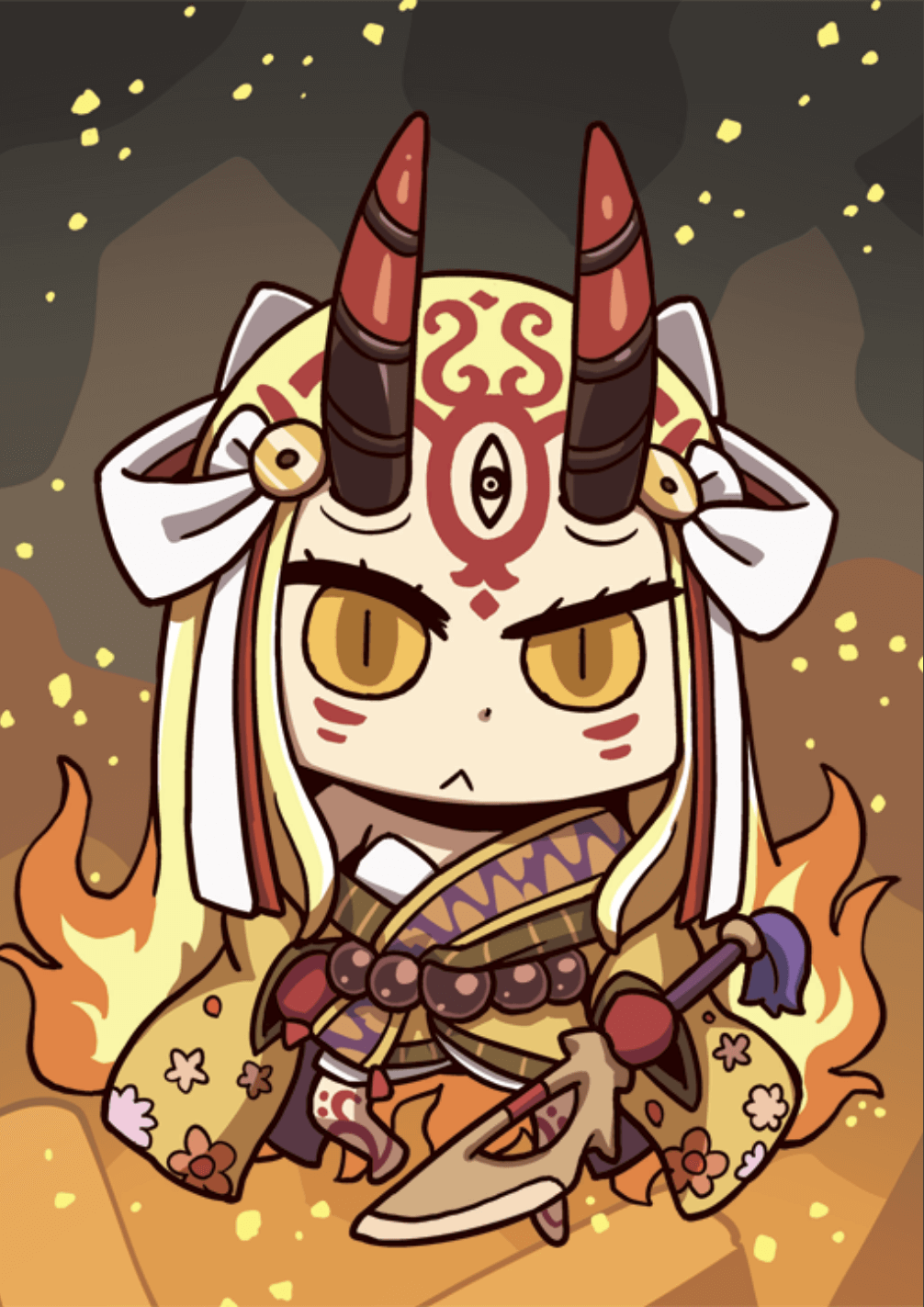 Self NP Damage Up Self Debuff Clear

Demonic Nature of Oni A

Violent Oni of Ooe A+

Great Grudge of Rashomon B

When equipped on Ibaraki-Douji,
Increases party's Buster Card effectiveness by 20%.
Decreases party's DEF by 10% [Demerit] while she is on the field.

“My blood is boiling… Literally!”

Ibaraki-Douji, the burning demon from Mount Oe, is a uniquely interesting servant. Initially introduced as a raid boss in the Rashomon event, Ibaraki functions as a powerful ST Buster Berserker who balances the class’s usual defensive disadvantages with a survival-oriented skill set.

Pairing a triple-Buster card deck with a single-target NP and the powerful dual steroid on Demonic Nature of Oni, Ibaraki has the strong potential damage output expected of a Berserker. She also benefits from good survivability relative to most servants in her class thanks to the combination of Morph’s Defense buff and Disengage’s heal and debuff clear. Combined with the ability to remove enemy buffs with Great Grudge of Rashomon, Ibaraki serves as a well-rounded damage-dealer for Buster-oriented teams.

Despite her decent base NP generation, Ibaraki’s card deck hinders her ability to fill her NP gauge without the help of supports, making it difficult for her to sustain her damage output over multiple turns. Additionally, Disengage is underwhelming relative to the rest of Ibaraki’s skill set, as the additional bulk it provides is fairly small. Ibaraki also has no way to protect herself from being bullied by enemy NPs, which again leaves her dependent on supports.

Overall, Ibaraki has the potential to be a powerful Buster servant when properly supported. She needs help to charge her NP gauge and to fend off enemy NPs, but with those problems solved, she has high damage against most targets and is unlikely to fall to normal attacks.

Given Ibaraki’s Madness Enhancement, her three Buster cards, and her Buster NP, she can deal massive amounts of damage with Buster Brave chains. Furthermore, Demonic Nature of Oni provides a significant and long-lasting boost to Ibaraki’s NP damage in particular. Ibaraki’s single target NP makes her ideal for taking out bosses and other enemies with high HP, as she has the capability to deal significant damage in a single turn.

While Ibaraki suffers defensively from her Berserker class, she also has skills to help her stay longer in battle. Disengage is sometimes handy for removing pesky debuffs and damage-over-time statuses like poison, and Ibaraki also has Morph to increase her defense significantly for one turn and moderately for two more turns afterward. Morph stacks well with outside defensive buffs, and with a little bit of outside protection Ibaraki can potentially survive taking enemy NPs head-on.

Demonic Nature of Oni provides a modest boost to party Attack, allowing Ibaraki’s teammates to hit a little harder than they would otherwise. Ibaraki’s NP also removes enemy buffs after it deals damage, which is useful for boss fights and challenge quests with enemies that tend to make liberal use of buffs.

Ibaraki’s triple-Buster deck means her opportunities to charge her NP gauge are limited. However, her Quick card and her Extra have high NP gain potential, and her Arts card is decent as well, so when she does have access those cards she can fill her NP gauge fairly well.

Ibaraki innately takes double damage as a Berserker, so the healing provided by Disengage is fairly marginal. The selfish debuff removal helps Ibaraki’s stability, and Ibaraki’s defense buffs stretch the health granted by the healing a little further than it would otherwise go, but the skill is unimpressive overall.

Ibaraki has no way to protect herself from enemy NPs without outside help. While she can protect herself reasonably well against normal attacks, she will need the help of supports to survive through enemy NPs. Fortunately, Morph’s defense increase is significant enough that Ibaraki can feasibly withstand enemy NPs with just one or two outside defense buffs.

Ibaraki pairs two powerful skills with one situational skill. Demonic Nature of Oni and Morph are both important to Ibaraki’s functioning, and as such both should be leveled to maximum as soon as possible. Demonic Nature of Oni gains more from each level and represents a significant boost to Ibaraki’s damage, so it should be leveled first if the skills cannot be raised simultaneously. Disengage gains little from levels and can clear debuffs even at level one, and as such it can safely be left for last.

Due to Ibaraki’s innate Attack and NP Damage buffs, CEs that provide Buster Performance Up will stack multiplicatively with Ibaraki’s skills and significantly boost her damage. Attack Up CEs can also be helpful for boosting Ibaraki’s overall damage. Alternatively, CEs that provide Starting NP can help to offset Ibaraki’s inconsistent NP gain in order to allow her to use her NP sooner.