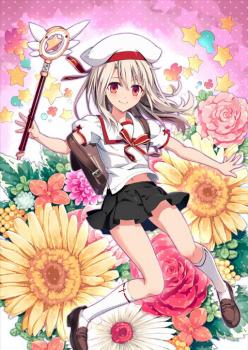 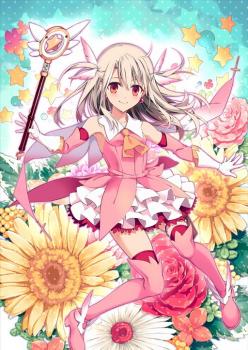 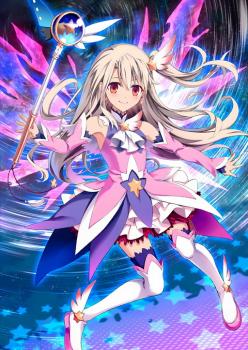 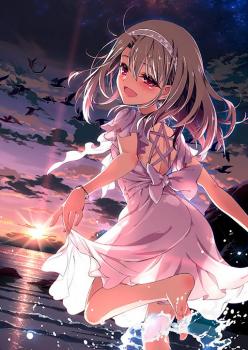 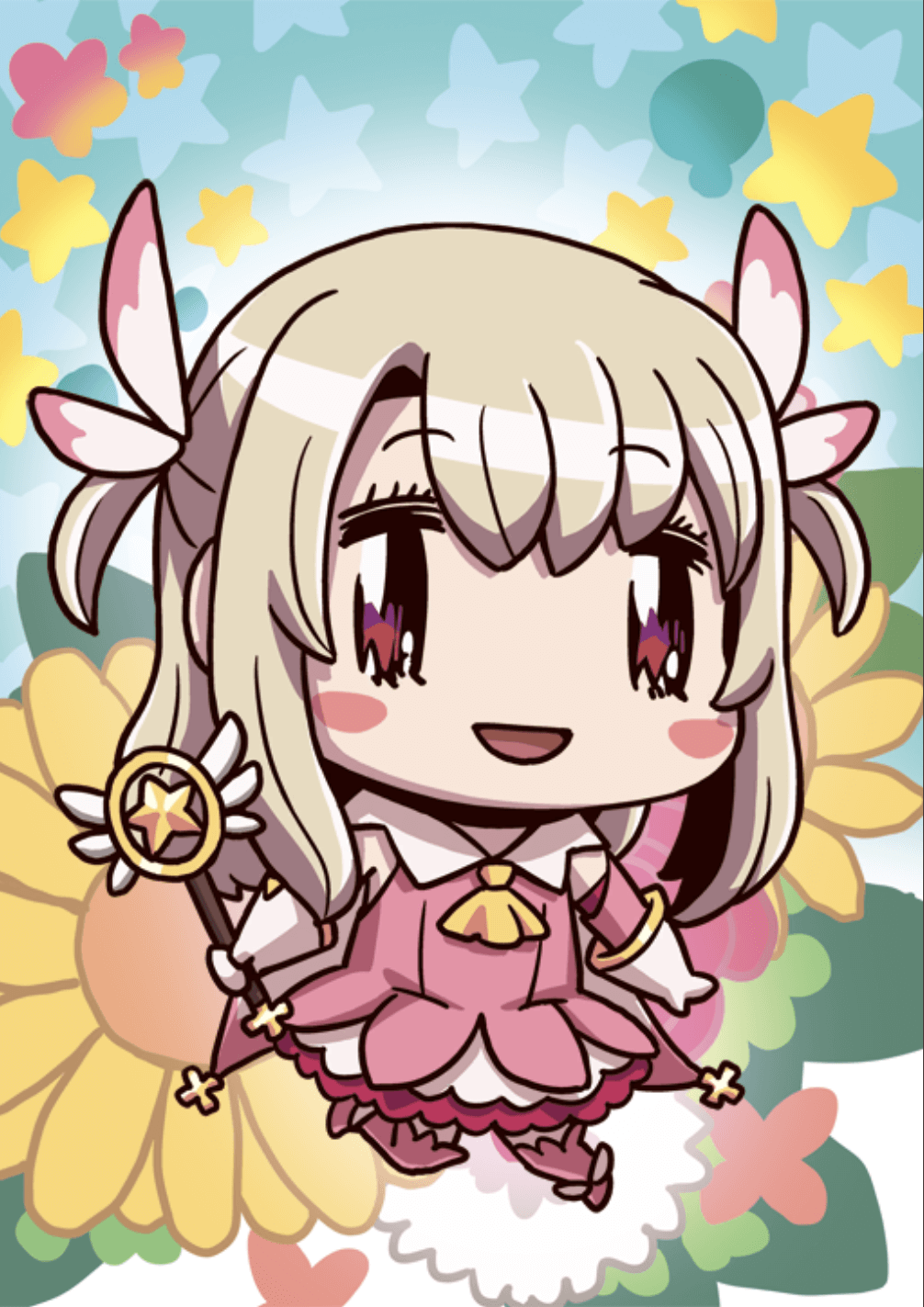 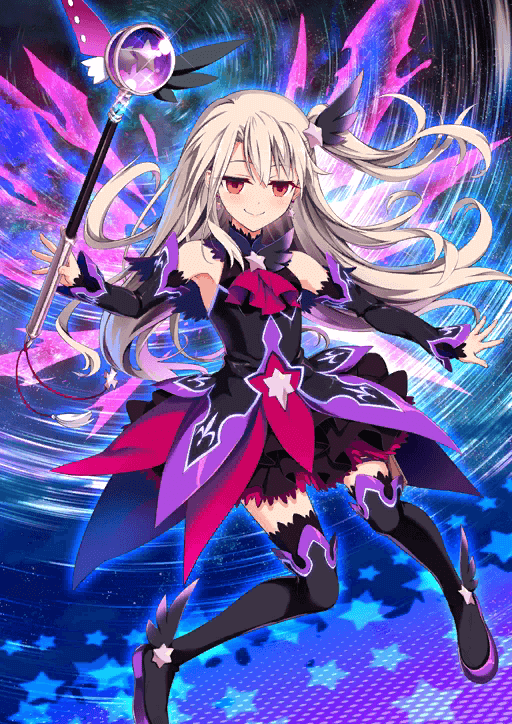 Child of Nature B

Apply Invincible to self (1 turn).
Increase own NP Gain (3 turns).

Shining into the Future A

Increase NP Gauge by 3% each turn for yourself.

When equipped on Illyasviel von Einzbern,
Increases party's Buster, Quick and Arts Card effectiveness by 8% while she is on the field.

I worked pretty hard. Aren’t you going to say anything nice?

Contracted by an evil magical wand to unleash explosion magic Germanic named magic, Illya has decided to take a break from hunting Class cards and rescuing Miyu to save masters in distress! Utilizing a high damage single-target Buster NP, Illya will blast away anyone who would threaten her darling onii-chan.

Illya’s main strength lies in her powerful Noble Phantasm. Quintett Feurer is one of the hardest hitting Noble Phantasms in the game, dishing out raw damage which not only is boosted by Cheerful Model Mystic Code’s 50% Buster up, but also by its overcharge’s additional Buster up. In addition she is rather hard to bring her down with her naturally high HP pool, her 1-turn Invincibility on Child of Nature, and her healing, Debuff Immunity, and Guts on Suspicious Medicine. Suspicious Medicine also is targetable, giving Illya a good chance to support her allies. Thanks to a 48% effective NP gain up along with 3 Arts cards, Illya also can fill her gauge in a hurry when her skills are up.

Becoming a magical girl may sound like it’s all fun and games, but it does come with a cost. While her NP packs quite the punch, it also inflicts demerits to Illya’s attack and defense lasting for three turns, affecting her sustained damage, which is exasperated by her 0.9x Caster modifier and single Buster card. She also has to deal with chance-based buffs on Suspicious Medicine, meaning her crucial survival tools and ability to circumvent her demerit may fail at any time. Finally, she has issues getting her NP gauge to full when her NP gain skill are not active due to a poor Quick and Extra card.

Illya primarily serves as a nuke option against Assassin, Berserker, and Extra classes. If a Master can get her NP gauge filled, she will not disappoint.

With a burst turn minimum of 70% total Buster buff, which can scale up to 150% with overcharge, Illya hits like a truck against a single enemy. Her interlude only makes this damage even higher, catapulting her to one of the hardest hitting Servants in the game.

With Invincibility on Child of Nature and Guts on Suspicious Medicine, Illya has the potential to tank two otherwise-fatal Noble Phantasms and survive. Her healing and her high HP pool also allow her to take on even more hits and still survive.

Suspicious Medicine is targetable, meaning Illya can heal any ally of her choosing and give them a 3-turn guts, debuff immune, and heal 3000 HP. As Masters will often use her with support Casters, this can be used to protect them from incidental damage.

While Illya has a low NP gain rate in general, she has a multitude of skills to boost it. In addition to the decent NP Gain on her Arts cards, she has buffs both on her NP and on Child of Nature to boost her NP gain in total by up to 48%. Furthermore, she can draw on her three Arts cards to make easy Arts chains, while her Infinite Magical Energy provides a passive 3% extra NP Charge per turn to compensate for her weak bases.

True to character, breaking Illya’s threshold via her NP will cause damage to her body – in this case 10% attack down and 10% defense down. Coupled with the Caster 0.9x damage multiplier and BAAAQ card set, this can cause Illya’s off-burst turns to leave something to be desired in terms of damage.

Illya’s Suspicious Medicine only has a 70% chance of providing Guts and Debuff Immunity, meaning Masters may not get the on-demand survival or NP demerit circumvention they need in a tight place.

Illya has a lot of difficulty generating her NP gauge without her Child of Nature skill or NP buff. Contrary to other casters, she has no Territory Creation, as well as a rather poor 3-hit Quick card and 5-hit Extra card on a paltry 0.32% NP gain rate.

Everything about Illya revolves around her Noble Phantasm, so craft essences should be chosen to get her to fire it off faster and harder. If a Master wants to fire off her Noble Phantasm faster, she will benefit most from Starting NP Gauge CEs. Should a Master want to fire it off harder, Illya will scale hardest with NP Damage, Attack Up or Mixed NP/Damage CEs. As a niche usage, if a Master wishes to swap Illya in to tank an enemy hit and then blast them back, she can benefit from a Target Focus CE. Masters should avoid Buster based CEs unless necessary as they will not stack well with her skills and Overcharge.