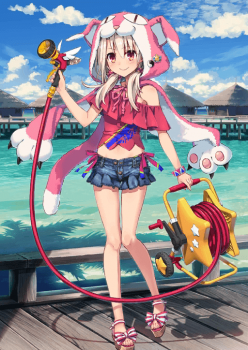 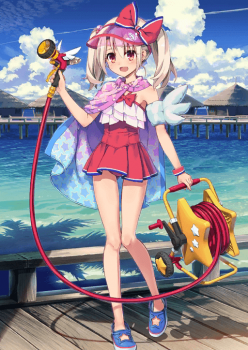 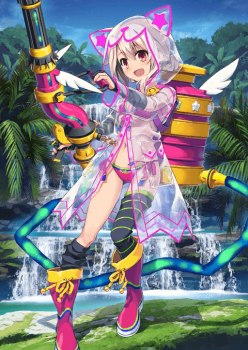 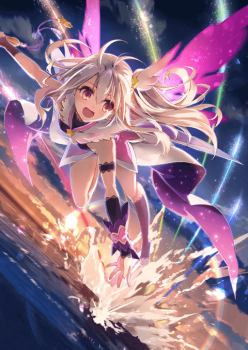 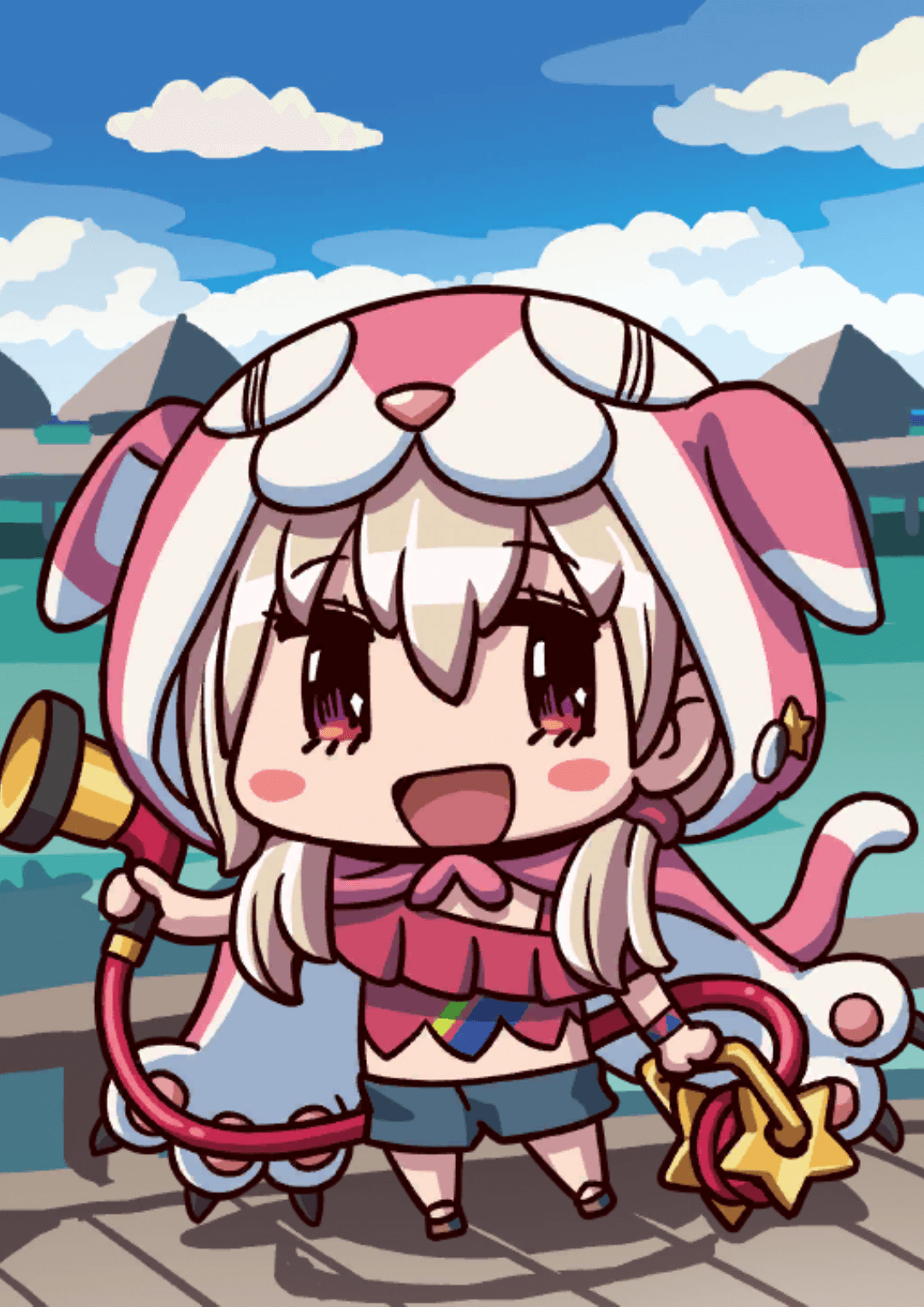 Self Star Gather Rate Up (Quick)

Increase own NP Gauge.
Increase own Critical Strength (3 turns).
70% Chance to restore 500 HP each turn for self (5 turns).

Increase NP Gauge by 3% each turn for yourself.

Deal damage to all enemies.
Apply Sure Hit to self (1 turn) [Activates first].

When equipped on Illyasviel von Einzbern (Archer),
Increase Quick, Art and Buster cards effectiveness of all allies by 8% when she is on the field.

What’s this? A new Illya version in a swimsuit which looks suspiciously like a cheerleading outfit, carrying a water hose and a metric ton of magical power? Everyone’s favorite magical girl returns to top form as an Archer with an AoE Quick Noble Phantasm capable of looping, and crit power which would make Miyu cry.

Like her Caster counterpart, Illya is all about the damage, but unlike her counterpart this damage comes from her critical hits as opposed to a nuke of a Noble Phantasm. Both her skills, Legal Shower! B+ and High Pressure! A increase her critical strength up to a whopping 150% on Quick Cards total. This, combined with Skadi shenanigans can have her devastating an enemy in a single card hit. She also has looping potential thanks to the NP gain buff on Summer Vacation! (Child) A+ along with a Quick up on High Pressure, a charge on Legal Shower, and passive generation on Infinite Magical Energy C. These make her a true two-way player, being effective in both challenging quests and farming quests.

On the flip side of things, Illya cannot effectively do both of her specialties at once. High Pressure unfortunately has both Illya’s 3-turn Quick up buff she’d need to loop, and her primary Critical steroids, meaning a Master could not use both boons in a farming situation on the final Wave. She also is rather fragile and will need outside help to survive.

Illya’s versatility cannot be disputed, and she would be a wonderful addition to any Master looking for an AoE Archer to add to their team. Just don’t flip her “weird” switch!

Illya doesn’t have just one, but two buffs to her Critical damage, with Legal Shower providing a 50% boost to all Critical damage for 3 turns, and High Pressure providing a 100% boost to Quick Critical damage for 1 turn. Even better, High Pressure has a star gathering skill for Illya’s Quick cards. Her classing is also helpful as Archers have higher star gathering than most other classes. When paired up with the right Servants, her Critical hits with Quick cards can hit for more damage than some Noble Phantasms.

Illya has everything one needs to Quick Loop: An NP gain skill on Summer Vacation, Quick Card up on High Pressure, a 30% charge on Legal Shower, decent hit counts on an AoE Noble Phantasm, a passive 3% NP gain per turn, and just enough cuteness to do it with flair. While she isn’t quite at the Tier 1 level for looping, she can loop with minimal support and a MLB Kaleidoscope and not require a plugsuit swap, or with other NP Gain CEs and a plugsuit. Even without a double Skadi or an Altria Caster setup, she gains more than enough gauge to get off at least 2 Noble Phantasms in three turns.

Illya’s Summer Vacation skill has an interesting skill boosting the Attack of child allies by 20%. While not versatile in practice, this skill can provide that little extra boost to Illya’s attack as well as some allies. One should note that Kama is only considered a child in her 1st Ascension and Nursery Rhyme only in her 2nd and 3rd.

When looping, Masters often want to be able to have some decent steroids for the third wave of enemies, which often contains stronger mobs. While Illya would seem perfect for this due to her Critical steroids, it unfortunately cannot work that way as her Quick up skill on High Pressure also activates her 1-turn Quick Star Gather and 100% critical damage buffs. Masters looking to loop would use this turn 1, and lose it by turn 3. Further, Legal Shower provides the Critical damage boost for 3-turns, but when looping one cannot use it until turn 2 as they need the NP charge provided by the skill. As a result, Masters will need to choose between either Critical damage or looping when using her.

Illya cannot take many hits and survive. Her HP is on the lower end of the spectrum for 4-stars, and her only method of recovering it is with Regal Charge’s 3-turn low HP healing skill. To make matters worse, this HP healing skill is chance based, so it can miss at inopportune moments. She does have hard survival in the form of a 1-hit 3-turn invincibility on Summer Vacation, but by being of a 1-hit nature, it’ll go away fast.

Illya’s kit centers around both Critical Damage and NP Looping. It is imperative to level all her skills as they all make her what she is.

Even magical girls want to have fun!

At long last, the magical girl takes the opportunity summer provides to cast her trademark identity aside and become a normal schoolgirl. She's more excited than usual, but her IQ and LUK are slightly lower. Basically, she's become a comic relief version of Illya. And while nothing good ever seems to happen to her, she's sure to share both her smile and her tears with us.

Ruby has turned into a hose and nozzle, going into "Splash Mode." She may look different, but her ability to flap around on her own and mess with her surroundings remains undiminished.

By the way, Illya left the cards in her room.

One day, Illya had a realization.

"As long as I'm in Chaldea, does it mean it's summer vacation forever!?"

Illya's the kind of good girl who meticulously plans out everything and finishes all her summer homework during the first half of summer break, and she is always bored during the latter half of break. And right now Illya finds herself in a situation where that boredom has been extended.

"Maybe it's time I start having fun... And does that mean being in a swimsuit...?"

Her unexplained desires to let loose grew more and more as days passed. She also realized that a handful of Servants always acted strange every summer.

"Perhaps there's a seasonal epidemic that goes around?" ponders Miyu.
Well that's scary.
"Symptoms are more severe in those who are normally very serious," says Kuro.
Please don't scare me like that.
"Let's vaccinate you, just in case," suggests Ruby.
Okay, that's reassuring.

And thus a young girl's Spirit Origin was transformed into a swimsuit.

Regardless of how it happened, when Illya shifted into summer mode (both physically and mentally), her objective switched to wholeheartedly enjoying summer vacation by giving her all to having fun. And so she is sure to play around joyfully no matter where you take her.

And along with her rationale, her appetite also has gone off the rails, and so she will often bring up food as a topic of conversation. Basically she'll eat anything and think that everything is delicious. She is absolutely not, in any way, getting fat. This is just a growth spurt.
...I repeat, I am NOT getting fat!

High Pressure!: A
A skill that increases the water pressure and discharge from the hose. As a side note, even though it's called water, it's actually a sort of magical energy that Ruby converted to make it look summery, and what comes out of that nozzle may differ from time to time.

Summer Vacation! (Child): A+
Elementary school children are powerful, almost invincible during the summer. (They think) they can do anything, and (they think) they have all the time in the world.

Legal Shower!: B++
Loaded with Ruby's meticulously-made herb extract (deadly poison). They are not only effective on contact, but they are also potent if inhaled.

"Its sophisticated toxicity is not only harmless to Illya, but it has the added bonus of actually raising her concentration!"

Its effects are so potent that even the hydra would recoil, but parents should rest assured that they're completely

Young Girl, Become a Rainbow.
Fifth grade summer vacation...a once-in-a-lifetime occurrence.
...Or so it should have been. But after having to repeat the so-called invaluable summer for numerous years, Illya finally realizes the true meaning of summer vacation.

Everything comes to an end. The moment something starts, the countdown to its end begins as well. Treasures obtained, the emotions that come with them, and even precious memories are bound to disappear one day. But even if you try stopping the clock out of fear of losing things, the treasures will lose their luster. And that's why we cannot stop. We need to continue toward the future even as things come to an end. The ancient treasures become constellations, and the paths we walked become a rainbow that paints the skies...

This is the important life lesson she came to learn...though honestly, that kind of awareness should be saved for serious main stories... Either way, Illya converts all these summer memories and bonds into power to transform into "Prisma☆Illya Splash Rainbow!" Her resolve to end summer vacation calls forth another Illya from a different time, and a light bullet that's seven times more dense than normal time density fires at anything stagnant.

And she'll try her best again during the new school term.