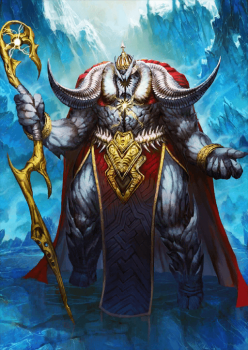 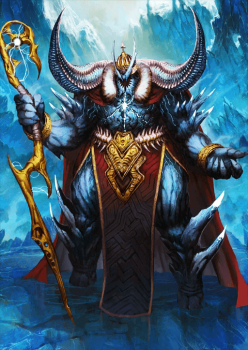 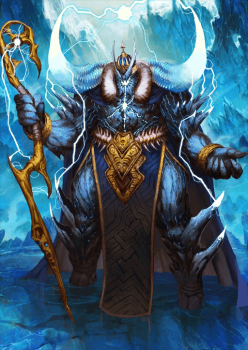 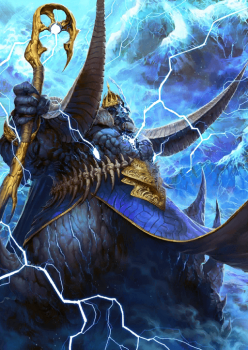 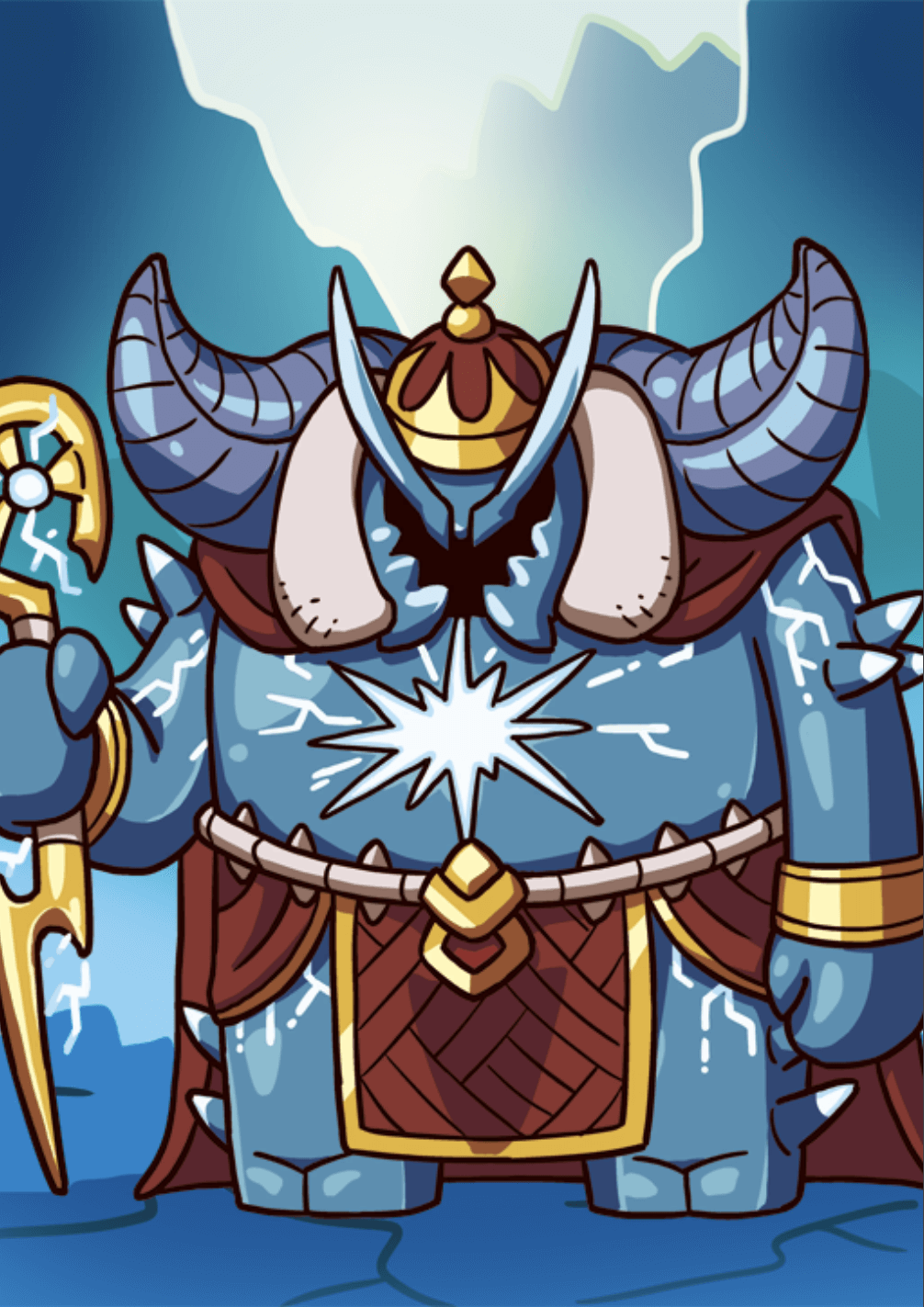 Apply Invincible to self (1 turn).
Decrease ATK for all enemies (3 turns).
Remove Buffs from all enemies.

Deals damage to all enemies.
Decrease Buster resistance for all enemies by 20% (3 turns).

The Beast that Accompanied me On My Journeys

Deals damage to all enemies.
Decrease Buster resistance for all enemies by 30% (3 turns).

The Beast that Accompanied me On My Journeys

When equipped on Ivan the Terrible,
Increase all allies' Buster Card effectiveness by 10% & NP Strength by 10% when he is on the field.

“Time for worshipping is finished. Therefore... Next, it's the time to battle.”

A fusion between the human known as Ivan the Terrible and an unknown Demonic Beast, the Lightning Emperor Ivan rules over the Eternally Frozen Empire - Anastasia with equal measures of cruelty and piety. A Rider-class damage dealer Servant with Buster-type AoE NP with a straightforward but effective kit.

As a damage dealer, much of Ivan’s capability to deal damage rests on the various buffs granted by his NP Zveri Krestnyi Khod and second skill Innocent Monster (Foreign). The two Buster Performance boosts they provide are particularly notable, as both last for 3 turns, giving Ivan a considerable lead in terms of sustained damage over his competitors. Furthermore, his skills also enhance his NP Gain (Mental Schism) and provide some amount of critical stars (Innocent Monster (Foreign)), helping him unleash more NPs as well as critical hits, the latter of which is also aided by his naturally high Star Weight. Outside of the damage department, Ivan rounds up his kit with an Invincibility buff, as well as two utility tools in the form of self-debuff removal and buff removal (for all enemies).

The main weakness Ivan’s Buster-centric kit, however, is that it lacks any sort buff capable of boosting his other cards, which lowers his damage outside of burst turns. Furthermore, he also lacks a tool integral to AoE Servants, which is an NP Charge skill. This results in an almost complete dependency on supports to perform instant NPs, which makes him a less desirable option for farming. His last and least significant weakness is the fact that a lot of his skills’ effects often have different usage timings, which, sometimes, makes using them (Emergency Prerogative in particular) a bit of a dilemma.

All said, however, Ivan the Terrible is a highly solid AoE Rider option by all metrics, whose Buster cards are sure to deliver heavy blows to his opponents. While his lack of NP Charge lessens his potential as a farming unit, the damage and utility the Emperor of Lightning provides are more than enough to make up for it.

The long durations of Ivan’s offensive buffs ensure that he would be able to get the most out of it, even when his Buster cards are unavailable during the NP Brave chain turn. Furthermore, the Buster Performance boost provided by his NP comes in the form of a debuff on all enemies, which benefits the Emperor’s allies as well as himself.

Aside from having access to a considerable NP Gain buff, Ivan’s naturally high Star Weight enables him to benefit doubly through his reliable critical hits, which also provide an increase to his overall damage. To further improve on his critical capability, Ivan’s second skill provides a decent amount of critical stars every turn, stars which, while not enough to ensure criticals on their own, allow for more flexibility for supports as well as their CE choices.

Ivan’s AoE buff removal on enemies is generally considered to be both rare as well as highly valuable, and this gives him a significant edge over his competitors in terms of flexibility for difficult quests.

Ivan’s various three-turns Buster performance boosts, on first glance, may seem to be a significant increase to his sustained damage output, but in reality, it is balanced out by the fact that he lacks any sort of neutral damage battery (i.e. Attack Up or Critical Damage Up). While this is less of a problem during NP Brave turns (where Buster cards generally excel), the NP charging properties of Arts and Quick cards are generally preferable outside of it, which reduces the significance of his buffs’ three-turn durations. Fortunately, proper use of damage supports is generally more than enough to make this weakness largely unnoticeable.

Some extent of farming capability is generally expected of AoE Servants, but it is one of the fields Ivan doesn’t particularly excel at. While his above average NP damage allows him to kill higher-tier mobs more reliably, his lack of instant NP Charge places a restriction on his CE choices, and may force him to rely on supports to unleash early-turn NPs.

While the various effects contained within Ivan’s skills are undoubtedly powerful, their usage timing often conflicts with each other, which means that he’s often unable to gain their full benefits. This aspect of his kit also presents a dilemma in more difficult quests, as Masters will often be forced to choose to forego one effect or the other.

Of Ivan’s three skills, his first two are important to his damage dealing capability and should ideally be maxed, with the second taking precedence over the first. His third, on the other hand, can generally be left alone unless the additional cooldown reduction is desired.

In farming scenarios, Ivan’s preference leans heavily on Starting NP Gauge CEs, in order to ensure as early a NP as possible. On a more general setting, his other choices revolve around various damage boosting effects, such as Attack Up, NP Damage Up, Critical Damage Up, and Buster Performance Up.

The Russian Tsar and a monster capable of inflicting unendurable terror.
In this Lostbelt, he has transformed himself into a Demonic Beast, becoming almost godlike.
He is Ivan the Terrible.

Height/Weight: 531cm, 2,548kg (Both unknown when fused with the mountainous Demonic Beast)
Origin: History and Lostbelt
Region: Russia
Alignment: Lawful-Evil/Chaotic-Evil
Gender: Male
He is classified as having both Lawful and Chaotic alignments.
The Spirit Origin that is registered in Chaldea is his Lawful side.

Considered to be the most horrendous tyrant in all of Russia's history, his wickedness and cruelty are the stuff of legend. And yet, he was also a devoutly faithful man. No ordinary human could reconcile such an extreme dichotomy, and it is likely something that only a tsar with absolute authority could possess.

Even knowing what to expect, any ordinary person would likely faint from so much as glimpsing this Servant, not only because of his monstrous, imposing appearance, but also because of the overwhelming power of his presence.

Mental Schism: A
During his reign as tsar, Ivan the Terrible established a centralized government, but at the same time, his rule was defined by terror.
In the mornings, he cloistered himself in a church so he could reflect upon his sins, while in the afternoons he reveled in torturing rebels. These conflicting saintly and villainous mindsets allow him to switch between two categories of alignment: Lawful and Chaotic.

Innocent Monster (Foreign): A
He asserted that he was like unto a god, and by persecuting any nobility that had privilege and power, he was able to bring his authority to the absolute peak. Regarded by the people of Russia as the unchallenged tsar, the people in Western Europe cowered in fear and called him \"Ivan Grozny\" (Ivan the Fearsome).
Here, having fused himself with a massive Demonic Beast that was itself considered the strongest of its time, he has become (or rather, been reduced to) a monstrous leviathan. Fitting for the ruler of the frozen empire of the Lostbelt Russia.

Emergency Prerogative: A
The power of absolute control for the Tsar that Ivan the Terrible sought in order to control the opposing aristocrats. His intense intimidation and the power of his presence reduces the stats and skill ranks of those who face him. An ordinary human would find it difficult to even look at him. However, anyone possessing Charisma ranked B or higher can negate the effect.

[Chyornyj Oprichniki]
Rank: B
NP Type: Anti-Personnel
Range: Anywhere within his territory.
Maximum Targets: 3,000
Black Dogs, Come Forth into My Dreams.
Also known as the Black Dog Corps. A Noble Phantasm created from Ivan the Terrible's personal guards, the Oprichniki, which were established at the same time as his Emergency Prerogative. The Oprichniki, who served directly under Ivan the Terrible, reserved the right to confiscate land and property of the aristocrats.
The group dressed in all black and rode black horses bedecked in black harnesses. They hung severed dog heads about their horses' necks and carried broom-shaped whips made from animal fur to hound and sweep away any who would betray the Tsar.
They once slept and ate together under a single roof like a community...but they no longer exist.
They now dwell in the Demonic Beast Tsar's dreams and serve as an automatic defense mechanism, a dominating Noble Phantasm force that is invoked the moment Ivan goes to sleep. The Noble Phantasm splits into multiple soldiers and runs amok, killing any who defy or otherwise wrong the Tsar.
As a group, their violence and power are overwhelming, but individually they are weak, which may be their only flaw. Still, each individual is still nearly as powerful as a low-ranked Servant when within the capital, Moscow.

[Zveri Krestnyi Khod]
Rank: A+
NP Type: Anti-Personnel
Range: 0
Maximum Targets: 1
Beast, Follow My Path.
A Divine Beast's procession, one that the Tsar believes will eventually lead him to the heavens. Anyone and anything that may block his way must be in rebellion against the Tsar, and therefore in defiance of God's will. Ivan the Terrible temporarily reclaims his mountainous form to mercilessly pulverize his enemy.

Ivan the Terrible is the tsar ruling the hypothetical version of Russia within the Permafrost Empire, Anastasia. His realm has been pruned from Proper Human History, as it was deemed an unnecessary deviation and an interruption even to Parallel World Theory. He has returned as a Servant, but in the history of the Lostbelt, he is the very first Yaga. All who live within his empire are Yaga, but that is only because mere humans cannot survive the extreme environment.

This change, however, cost them all something that was important to them as humans.

Unlock after clearing Lostbelt No.1 and reach Bond Level 5

Ivan the Terrible from Proper Human History may have been depicted as a tyrant, but he had little to no association with magecraft. However, when the world threatened to freeze over in the Lostbelt, Ivan called upon mages to develop a technique that combined humans with Demonic Beasts in order to survive.

However, this choice was tantamount to creating an entirely new sort of creature, completely different from humans. With their mentality so thoroughly changed, they were deemed to be taking a doomed path of human history. A dead end. A world that must be pruned.

With their never-ending wails echoing in his ears, the Ivan the Terrible continues his pilgrimage, plagued by regret.