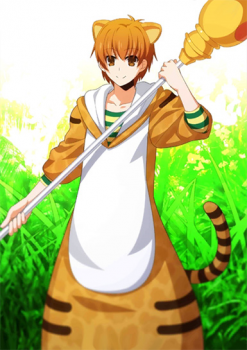 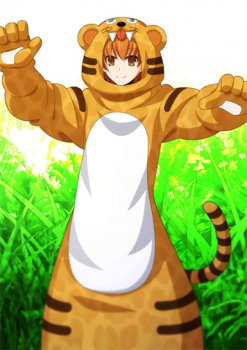 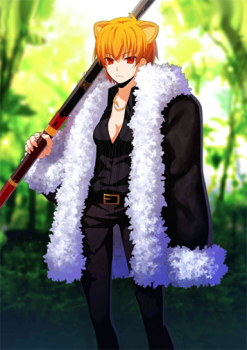 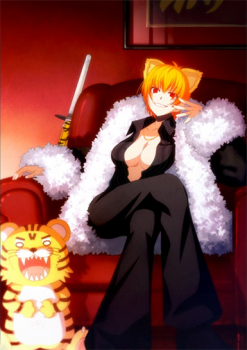 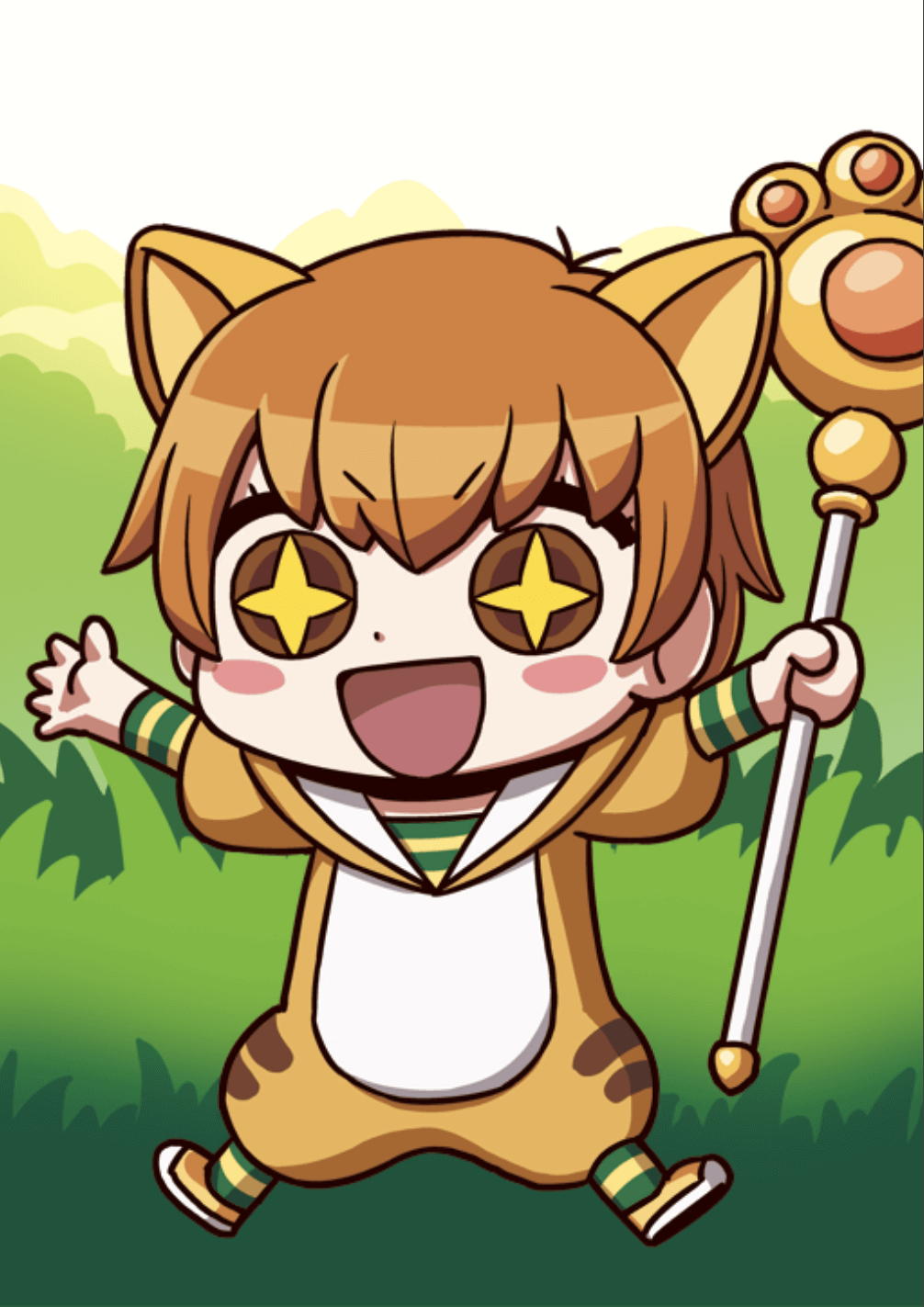 The Inescapable Claw of Death

When equipped on Jaguar Warrior,
Increases party's Buster Card effectiveness by 15% while she is on the field.

"The Jaguar knows all.  Offer up a sacrifice to the cat!"

Jaguars are close enough to Tigers, right?  At least enough for Fujimura Taiga to be summoned as the Pseudo-servant Jaguar Warrior.  On paper, Jaguar Warrior has pretty much everything one could ask for: Buster up, Attack up, non-intuition stars-on-demand, charge-based dodges, critical damage, star generation, star weight up, and an evade piercing NP.  Comparing her to an existing servant, she could be called an even more offensive Cu Chulainn (Prototype). However, to call her a fat cat would be an overstatement. Although she seems overpowered for a joke character, here's the punchline - half of these fantastic effects are tied to a 10 turn cooldown at max on one skill, while her critical niche's consistency is stage-dependent.

Stats-wise, Jaguar Warrior has marginally less Attack and NP gain than Proto Cu, but 500 less HP.  In return the divine spirit grants her a token 2% Mad Enhancement and 25 more divinity damage over Proto Cu.  The real star of her kit is her 4 hit Buster Card, which allows for better star generation and NP gain compared to her Celtic peers.  Meanwhile, having a Buster NP allows her to Buster Brave Chain for even more damage potential.

Overall, Jaguar Warrior is a strong, offensive Buster Crit Cat balanced by poorer survivability and critical consistency compared to her closest rival in gameplay.  Since this cool cat is story-locked, make sure to roll for her during her banners (especially during special Lancer-class only banners) if you want her at more than NP1.

Packing both a 30% Buster and a 30% Attack buff at max, plus stars on demand, Jaguar Warrior can stack offensive buffs by herself to deal even more damage on her cards and NP.  Her third skill adds a 3-turn critical aspect to her repertoire, increasing Jaguar Warrior's offensive prowess further.

With a Buster NP, two fantastic 4-hit Buster Cards and a dedicated Buster Buff, Jaguar Warrior has good damage potential through the nature of the 1.5x damage modifier on Buster cards as well as easier access to Buster chains.  She can thus easily take advantage of Buster teams and Buster-related supports.

Ignoring evade automatically on NP allows her to finish off some pesky bosses if you can get her NP up.  Additionally, the Sure Hit buff persists for the whole turn, which brings even more value to a brave chain or additional cards in general if the NP fails to kill.

Jaguar Warrior's first skill is definitely strong, but has an even higher than normal opportunity cost of being both a defensive skill and steroid at a 10 turn CD at max.  The attack-based evasion does mitigate the weakness slightly, but this skill definitely isn't something that can be used on a whim like Cu Chulainn's Protection from Arrows.

While Jaguar Warrior is already plenty strong with a 50% crit buff, the Forest-dependent Star Generation and Absorption buffs make her a truly self-sufficient monster.  Without these stats, Jaguar Warrior will not have the self sufficiency or the star weight (due to her Lancer class) to consistently take advantage of her critical buff, denying her access to one of her better niches.

Compared to a launch 3* lancer like Cu Chulainn, Jaguar Warrior has roughly the same or slightly less NP Gain on her Arts and Quick cards, which is slightly compensated for by her 4-hit Buster cards and 6-hit Extra card.  Without NP charge support, she cannot take advantage of her powerful NP turn potential. With 2 hits like her Arts card and lacking any bonuses, Jaguar Warrior's Quick cards are unfortunately weak.

Like a capricious cat, it seems like Jaguar Warrior wants to do everything.  However, the opportunity costs between her skills and their cooldowns does require nuance.  Thus, between Jaguar Punch and Kick, the leveling order will lean on a Master's combat preferences.

Easily the strongest of Taiga's skills in effect, she also gets the most combat improvement from leveling it up despite the long cooldown.  Max this first for better burst potential through a stronger Buster Up and increased stars on demand.

A solid Attack up for two turns with a standard 5 turn CD at max is always handy, if a little vanilla.  Maxing it second is an equally reliable way to increase Jaguar Warrior's offensive presence. If Masters desire more consistent offensive buffs, then max this first instead for its 5-turn cooldown.

Most of the time this will be a 3-turn 50% critical steroid, which is solid but not great without star support or star weight buffs.  However, when the stage-bound effects actually proc, this skill makes Taiga an independent crit servant. Thus, without support it's best to max this skill last.

Jaguar Warrior functions pretty similarly to a budget version of Lancer Kiyohime with better survivability and avenues of damage.  Thus, Buster Up and Starting NP Gauge are prime picks, while Critical Damage or Star Absorption can be used to supplement her critical presence.

Partake with the King / Golden Sumo

The combination of starting NP and Buster Up provides a good kick to Jaguar Warrior's burst damage, with the persistent Buster buff emphasizing her strong Buster cards  down the fight. Golden Sumo is a great alternative too.

Due to the long cooldown on Jaguar Punch, Jaguar Warrior avoids Buster buff redundancy and thus benefits well from these Buster Up Craft Essences.  Other hybrid CEs, like Hero Elly's Adventure, would work nicely as well.

With Starting NP Gauge, Critical Damage, and NP Damage to fill out her other offensive buffs, this CE makes for a good choice on Jaguar Warrior, especially if limit broken during the event.

The additional star absorption helps make Jaguar Warrior more consistent outside of Forest stages, where she doesn't get her Star Absorption buff on her third skill.  This CE allows her to grab the stars she wants to perform tiger punishment with her critical buff.