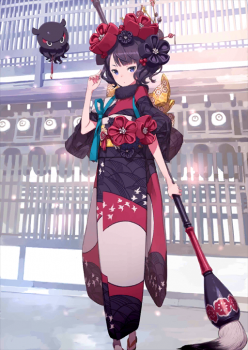 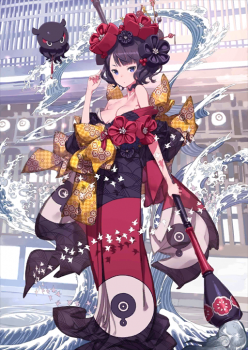 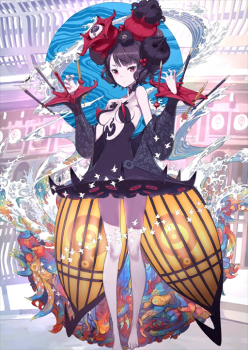 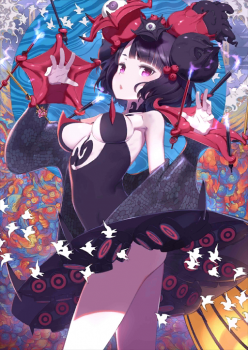 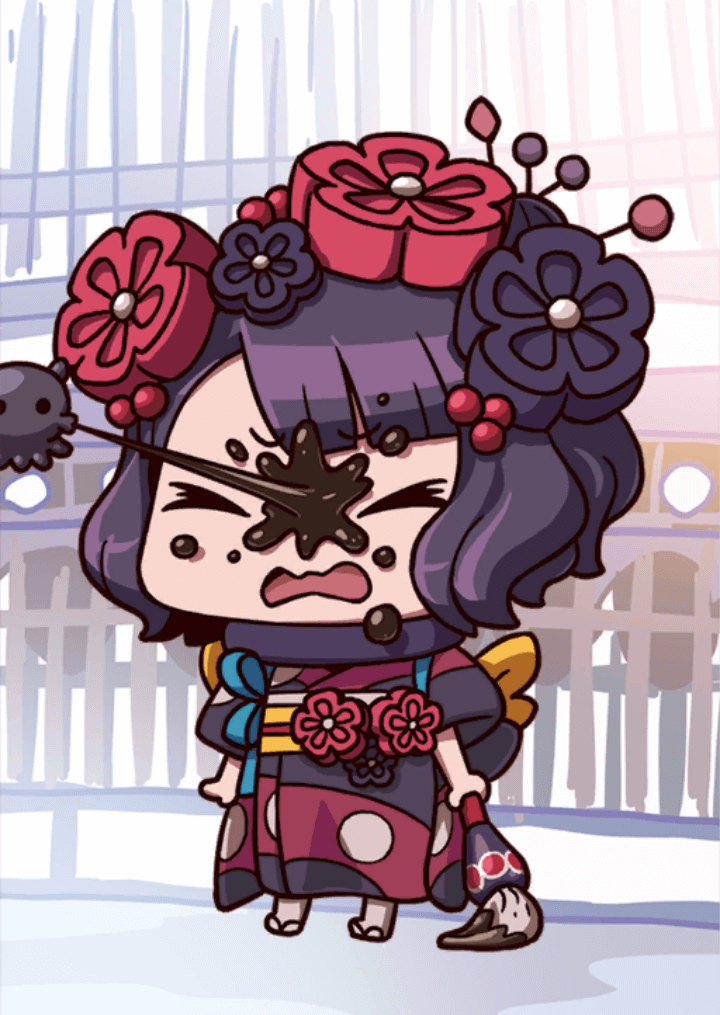 All Things in Nature A+

Decrease DEF for an enemy when attacking with Arts Cards for 3 turns (3 turns).

Thirty-Six Views of Mount Fuji A

Painting of a Dragon Passing Over Mount Fuji

When equipped on Katsushika Hokusai,
Increase own NP Strength by 30%.
Apply Guts to self (1 time). (Revive with 20% HP)

“I’ll paint even without permission.”

Sometimes, artists use ink to paint. Other times, they are tentacle monsters from another planet. With a paintbrush always at her side, Hokusai makes her living as an Arts focused AoE Foreigner with the potential to fire off multiple Noble Phantasms in a row.

Hokusai’s Arts cards are without a doubt her biggest strength. Thanks to the high hit count on her Arts Cards and a non-trivial 3-turn Arts up on Father-Daughter Bond, she can fill a significant chunk of her NP gauge with every Arts card. Combined with the 30% NP charge up on All Things in Nature, Hokusai should be able to launch back-to-back Noble Phantasms, especially with heavy Arts and NP Charging support. To add to it, via Pseudonym "Iseidako" she can stack 20% Defense down debuffs with every Arts card, potentially stacking a significant amount of extra damage. For an added bonus, her Noble Phantasm stacks even further massive damage against any “Human” attribute servants.

Unfortunately, all of this artist’s Arts focus means her Quick and Extra get neglected. Thanks to a low base NP gain rate, Hokusai’s Quick and Extra are way below par when it comes to generating NP Gauge, making her rather reliant on drawing her Arts cards on the right turn. As a foreigner, she also loses out on many class advantage scenarios, only holding a true class advantage over the Berserker Class and her own Foreigner typing. Lastly, her skills tend to be tied together, such as her evasion being tied in with her NP charge, and her buff removal being tied with her Arts up, thus often making her deceptively fragile in practice.

Overall though, the sheer Arts potential can make Hokusai a potential NP looper with Arts/NP Gain support, if she can deal enough hits in Overkill against the right enemies (Casters or Riders for example), providing great use in farming quests - although that often tends to require an extra NP level to pull off. Alternatively, her Noble Phantasm’s supereffective advantage against the “Human” attribute means she is a great general option to clear difficult quests with multiple Servant classes without having to worry about the Berserker class’s innate squishiness for example.  As such, she will paint any Master’s way to victory. Just ride the waves.

Despite only having a 0.33% base NP Gain modifier, Hokusai has high hit counts on her Arts cards and her Arts NP, the NP Gain of which she can boost via Arts effectiveness even further. Since she carries a high base star weight, she will also tend to gather a lot of Critical Stars to further boost her NP gauge via Arts crits. With 30% NP gauge ready to charge at any time, she should have no trouble getting her bar up to full (again).

Hokusai has multiple ways to buff stack her damage against enemies. Against all enemies she can boost her Arts Cards by 30%, and inflict multiple 20% defense down debuffs on any enemy she hits with her Arts cards. In addition, against enemies with the “Human” attribute, her Noble Phantasm will hit for Supereffective damage for some major damage, potentially reaching even single target damage levels on a back-to-back NP.

As a Foreigner, Hokusai has very few natural enemies, only receiving supereffective damage from Alter Egos and other Foreigners. This makes her a great option against groups of Servants, many who may have the “Human” attribute that she can hit so hard against. She also serves as a hard counter against certain enemies who remove buffs with their Noble Phantasms, although this is not necessarily frequent in practice.

Unfortunately for Masters, Hokusai’s potential comes only when they manage to pull her 6-hit Arts cards. Due to her low base NP gain rate, her 4-hit Quick and Extra cards will not generate much NP gauge. Masters will be forced to rely for Arts cards on the right turn in order to pull off both strong NP Gain and ensure the right enemies are debuffed. Masters also need to decide between maximizing Hokusai’s Noble Phantasm damage by using her Arts cards before firing off her Noble Phantasm, or maximizing her NP Refunding by using them after the NP.

Foreigners do not typically enjoy double damage against specific classes that other classes do. Outside of being the only class to receive ½ damage from Berserkers and being able to deal double damage to the few other Foreigners in the game, they receive and deal Neutral damage to almost every class in the game (with the exception of the Alter Ego class). Unfortunately, Berserkers provide the least refund of any class, hurting Hokusai’s refunding potential against her main counter.

Masters typically enjoy having flexibility in when to use skills for survival and/or damage, but Hokusai unfortunately has unrelated effects tied together on the same skills. Her NP charge skill is tied to her 1-turn evasion, meaning if a Master wants to use her NP charge they have to burn her evasion, and vice-versa. Her Arts Performance Up is also tied to her Buff Removal Resistance and Debuff Resistance, making it very hard to find the perfect turn to use these skills to full effect.

All of Hokusai’s skills combine together beautifully, but Masters will need to invest heavily in all of her skills to make the most of it. Leveling her skills all at the same time, and at least to 6, is highly advised. Like most Servants, Hokusai’s NP Charge skill, All Things in Nature, is mandatory to raise to max immediately due to the way it synergizes. Father-Daughter Bond is similarly integral to raise to as boost her Arts Performance and refunding, as well as to ensure her buff removal resistance is guaranteed.

Because of her 30% charge skill, Hokusai gravitates towards CEs that will allow her to fill her NP gauge fast. In that regard, Hybrid Starting NP Gauge / Damage CEs provide her the best bang for her buck. Since Hokusai has the potential to loop Noble Phantasms, Hybrid Starting Gauge / NP Gain CEs can be a godsend to get her to the desired refund. With the proper support, she could also get away with NP Damage Up CEs to maximize damage (they stack multiplicatively with her Supereffective modifier too). Lacking both of those, Masters can still use pure Starting NP Gauge or Arts Performance Up CEs.

I don't look a thing like Hokusai?
Well EXCUSE me for looking all cute and stuff!
If you want to know what happened, then listen to my story!

An ukiyo-e painter and printmaker during the late Edo Period.
In addition to working under the name "Katsushika Hokusai," he produced artwork under thirty different pen names, including "Gakyou Roujin" ("painting-obsessed old man") and "Souri."
One of Japan's most prominent artists, his works were also a great influence on many painters and musicians like Vincent van Gogh and Claude Debussy.
Known to be a rapid painter, Hokusai created over 30,000 pieces of art in his life, including ukiyo-e prints, paintings, sketches, and shunga erotic artwork.
In his later years, he lived with his daughter and assistant Katsushika Oui.
Some of his representative works are "Thirty-Six Views of Mount Fuji", "Hokusai Manga", "One Hundred Ghost Tales", and "The Dream of the Fisherman's Wife".
He moved 93 times during his lifetime, was careless with money, and is considered to have been very...eccentric.
It was said that whenever he went out, he could be heard mumbling a mysterious chant...

Fugaku Sanjuurokkei.
"The Great Wave of Kanagawa", one of Hokusai's best-known works of art, is the 21st piece in an ukiyo-e series.
By brilliantly capturing nature's movement in his godlike brush strokes, this work of art almost takes on a mysterious life of its own. All who lay eyes upon it feel the excitement and energy of the crashing waves.
Through his communication with the evil god of the Abyss, he has awoken to a talent out of this world. Making the madness his own, he created the ukiyo-e "The Twisted Wave of Kanagawa." This artwork combines the thirty-six views of "Primary Fuji" with the ten views of "Reverse Fuji," and treads further still, into a realm that's forbidden to any human.

All Things in Nature: A+
A type of Discerning Eye that is focused on investigating the true essence of all things in nature through observation.

Father-Daughter Bond: A
Hokusai's bond with Oui, strengthened by their time together in life, is so powerful not even the evil god's madness can corrupt it.

Pseudonym "Iseidako": B
The Octopus out of Space. Having blended with the evil god of the Abyss, his drawing style evokes non-Euclidean geometry.

Hokusai had a peculiar personality.
He didn't limit himself to a single drawing style, instead proactively studying other schools' techniques. However, he never allowed traditions to tie him down, instead always keeping his thoughts on the future.
For example, he learned the techniques of perspective drawing from Western art. He also blended snapshots of sudden movement with landscape painting, a technique that can be said to be the starting point of modern manga expression.
Should he manifest in modern times, free of the shogunate's harsh restrictions, he would gladly spend every waking moment challenging himself to reach new artistic heights, whether through the medium of shunga, abstract art, digital art, or even performance art.