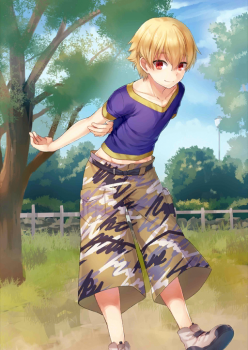 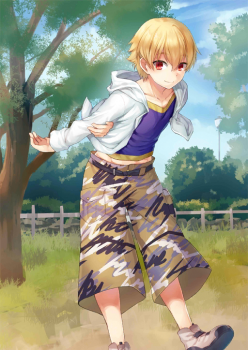 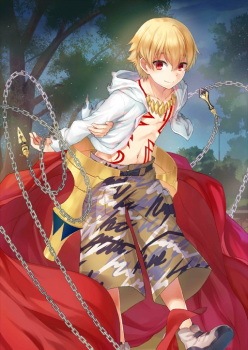 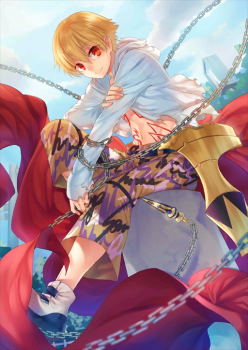 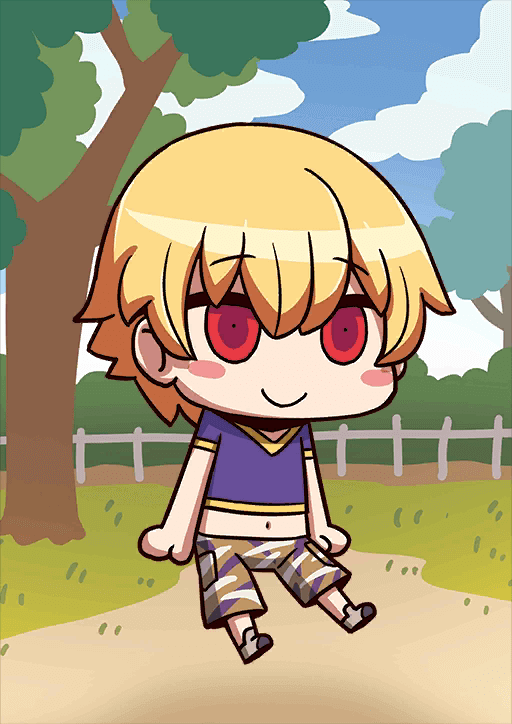 Chance to inflict Charm on a single [Humanoid] enemy (1 turn).

Gate of Babylon B+

Manifestation of The Golden Rule

When equipped on Kid Gilgamesh,
Increases party's NP Gain by 15% while he is on the field.

“We made quite a mess. I'll leave the clean up to you.”

Kid Gilgamesh, Ko-Gil, the well-behaved and mild-mannered child version of the prideful Gilgamesh, is an approximation to his adult self gameplay-wise, albeit at a lower rarity. With his similarly high attack relative to his peers, his base high star weight, powerful Charisma buff, high-ranking Divinity, NP Interlude, and good Independent Action rank, he boasts many of big Gilgamesh’s facets in damage, and even NP gain via his Golden Rule.

‘Lil Gil’s other main strength comes from his NP. Gate of Babylon’s Overcharge plasters all foes with immense NP damage down and critical rate down debuffs for a single turn, severely limiting their potential damage output for that turn. As his NP also lowers their debuff resistance (though only for that turn), he can even combo with other Servants who have powerful debuffs with a low chance to hit. Finally, he can Charm Humanoid enemies with a relatively high success rate to help disrupt and delay them.

However, in exchange for his utility and support, Ko-Gil misses out on the powerful anti-Servant NP, star generation and critical-related skills of his older counterpart, thus lacking the high damage ceiling his adult version has. He also lacks any reliable on-demand defensive skills for drawn out fights, Challenge Quests and the like, instead having only his NP’s debuffs as a way to reduce enemy damage output. Additionally, his Charm has a high cooldown, making it unlikely to be used more than once in a battle.

Overall, while lacking raw damage, Kid Gil is an AoE Buster Servant that still manages to carve out a semi-supporting niche with his high Charisma buff and the potent debuffs on his NP.

Kid Gil not only manages to increase his team’s damage capacity with ease through his above average Charisma buff, but he also has an upgraded NP which can support his team defensively and offensively. Gate of Babylon simultaneously inflicts powerful debuffs which lower the critical and NP damage of all enemies, and combines well with Servants who inflict status effects of their own due to its debuff resistance reduction. Furthermore, Gate of Babylon's hit counts are very impressive and capable of generating a good sum of Critical Stars if it activates Overkill or if Masters provide Kid Gil with Star Generation buffs (much like EMIYA).

With a Charm skill able to hit Humanoids, Lil’ Gil can potentially disrupt enemy NP turns, stalling them for one turn. As a good number of enemies (particularly bosses, and almost every Servant) have the Humanoid trait, Fair Youth will see a good amount of use.

Sporting a kit which doesn’t capitalize on the critical niche the Archer class leans towards does hinder Kid Gil’s maximum potential damage. With only his Charisma to rely on for damage boosts, his NP also doesn’t hit very hard in comparison to some of his AoE peers despite having an Interlude.

In addition to his Charm being on a long cooldown, Ko-Gil has a lower HP pool as well as no on-demand defensive abilities. Thus, he needs the help of other Servants to protect himself in long, protracted fights, so he can ideally fire his NP off multiple times. Often, even the massive NP damage reduction of his NP isn’t sufficient for survival against enemy NPs without additional sources of NP damage down from Servants such as Nightingale.

Our young Gilgamesh mainly fits into a more supportive role with him wanting to buff his teammates and increase their damage output. Thus, his skills should ideally be leveled based on the impact they give in this manner. Leaving his skills at 6 is generally good enough, but those who like his kit can squeeze out more performance by maxing out Charisma in particular.

Kid Gil is best used for either providing a hybrid of support and AoE damage to the team, or just as an AoE Archer for new Masters. For Masters looking to increase his overall damage, focus on either increasing his NP damage via Buster Performance / NP Damage as they stack well with his Charisma. Alternatively, consider augmenting his critical niche via Critical Damage. For farming purposes, due to his AoE NP, Masters should definitely go for Starting NP Gauge CEs instead.

Damage applifying servants?
@Ruler_Martha_saved_m wrote: I know that we have; tomoe…
Please give suggestions
@Amano wrote: I am a mid-newbie f2p player, I finished KnK…
If anyone has an Spare Guest Account with Ch'en?
@Hapuc wrote: (topic withdrawn by author, will be…
What's up with Shiki's NP?
@Mephala wrote: As of 10 minutes ago, I’ve got her at NP3…
Liz lancer or d'Eon?
@chan_aleg wrote: Who’s the “better” rare prism candidate?…
Read More