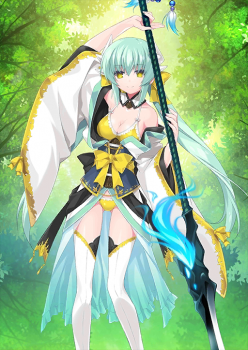 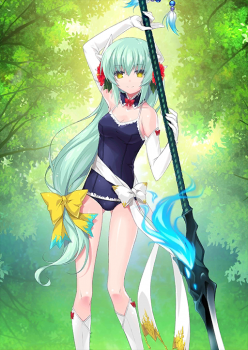 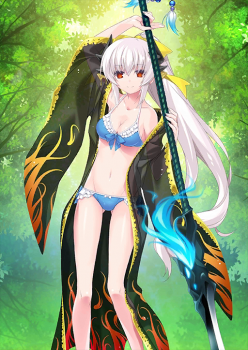 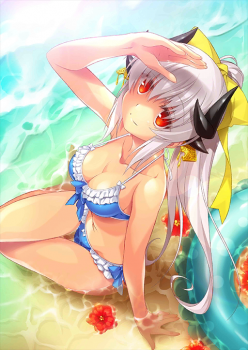 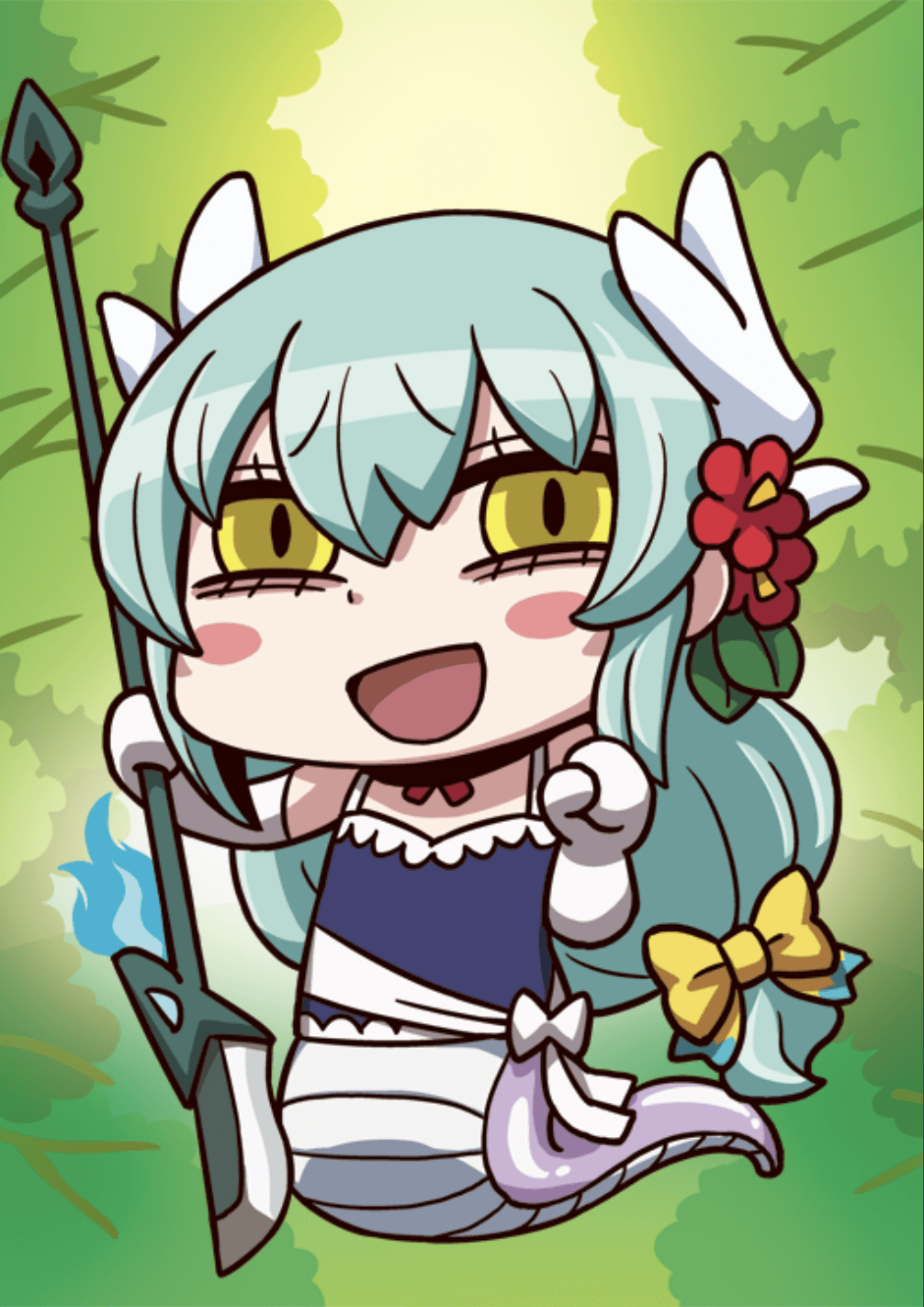 DEF Down Enemy ATK Up [Demerit]

Pursuer of Love A

When equipped on Kiyohime (Lancer),
Increase party's Buster Card effectiveness by 20% and decrease party's DEF by 10% while she's on the field.

"Hehehe. Darling, I don't mind you looking at other people's swimsuits, but of course, mine is your favorite right? Lies are, of course, forbidden."

The intensely passionate Kiyohime dons a swimsuit and brandishes a naginata, joining the summer festivities as a Lancer-class single target Buster Servant. With her intense stalking engine burning ever hotter, Kiyohime takes her Berserker skill set and applies it to the Lancer class.

Similar to her Berserker form, this Kiyohime is heavily focused on dealing damage. Between her 1.05x Lancer class modifier, her off-class Madness Enhancement EX, 3-turn Buster buff and high value Defense Down, Kiyohime's burst damage output is impressive with some of the higher ST NP damage of her rarity. In fact, her Buster Cards are excellent across the board, with both high damage from her Madness Enhancement and Bath Transformation, and high hit counts suitable even for NP Generation. In addition, she carries a few situational team benefits, with a near guaranteed Skill Seal on NP, a Defense Down on Pursuer of Love and a heavy Critical Chance Down to the entire enemy team on Passionate Summer.

Unfortunately, with such a heavy kit focused on offense, Kiyohime's personal defenses are very minor, with the demerit on Pursuer of Love even buffing the enemy's Attack by 20%. As such, timing or even using Pursuer of Love during more challenging content is often difficult and may cause more problems than the Defense Down benefit. In addition, while Kiyohime has potentially strong NP Generation, much of that benefit is tied up in her Extra card or Arts-card first infused Buster cards. As such, to charge Kiyohime's NP well, Masters often have to forego the Buster first bonus and run non-standard card chains.

Despite the rather constricted nature of her skills and her overall fragility, Kiyohime (Lancer)'s Buster damage can absolutely destroy any farming bosses with her burst damage potential. Making full use of her skill set is more difficult during challenging content, but nothing a good support can't help out with.

Kiyohime (Lancer) is one of the few Servants with high hit counts on her Buster and high NP generation per hit. Thus, much like Scathach and Chacha, she can generate NP pretty well via her Buster cards.

Masters can force normal Buster cards to generate NP by starting an attack chain with an Arts card. In addition, any Arts-led Extra chain will generate a significant sum of NP Gauge for Kiyohime (Lancer).

Kiyohime ranks very highly in NP Damage among the SR Servants (assuming no special effect modifiers), despite not having relatively weaker base ATK for her class and rarity. She also does very respectable Buster card damage, with more consistent turn-by-turn damage output due to her 3-turn Buster self buff (+30%). Combined with Madness Enhancement EX (+12% Buster Up) and her Defense debuff (-30%, which is 6% more than her Berserker form), she can get an up to a 1.846x multiplier on her Buster attacks, which is very high for what a Servant can accomplish by themselves.

To help offset her mediocre NP gain on her Quick Cards, Kiyohime  has a high number of hits on her Buster (6) and Extra (5) cards. High hit count Command Cards scale incredibly well with good base NP Gain as well as produce more Critical Stars under Overkill or Star Generation buffs (if applicable). Thus, Brave chains starting with Arts cards are highly encouraged for Kiyohime (Lancer) as her Buster Cards output practically the same NP Gain as her Quick Cards, while also causing her Extra Card to have very impressive NP Gain.

With a high hit chance Skill Seal on NP, a teamwide Critical Chance Down (which is quite useful against the Archer class's higher base Critical Rate) and a targetable Defense Down, Kiyohime is not an entirely selfish Damage-dealer.

Without access to any personal defensive skills such as Evasion or Invincibility, Kiyohime (Lancer) can fall rather quickly under enemy NPs and heavy attacks. In addition, her defense debuff skill also comes with a demerit of increasing the enemy’s attack by 20%, which only improves the incoming damage if the debuffed enemy is not dealt with immediately. Still, under the effects of class advantage this Attack Up demerit isn't as dangerous as it is for her Berserker version.

Both Critical Chance Down and Skill Seal are rather situational effects, all the while Masters need to be careful as to when exactly they can apply Pursuer of Love. In the case of Critical Chance Down, its effectiveness is dependent upon RNG, and remains mainly effective against high Critical Rate enemies such as Chimeras and Archers. For Skill Seal, while it can prevent enemies from using their Evasion or Invincibility, it also prevents the enemy from using some of their relatively harmless skills forcing them to attack instead.

Kiyohime's high damage potential is her main selling point, and thus Masters should prioritize the damage skills that give the most bang for their Ascension Materials. Since Kiyohime's skills have a clear pecking order in usefulness, Masters are advised to go all the way on each skill until they hit an Ascension Material barrier.

Kiyohime (Lancer)’s main goal is to burn her enemies to a crisp, preferably with her Noble Phantasm. Given the high value of her Buster Performance (up to 42%), ideally Masters prioritize the multiplicative stacking of NP Damage Up or Attack Up first. Meanwhile Starting NP Gauge is of course ideal to quickly launch an NP. Buster Performance Up is still viable, yet Masters could also consider experimenting with CEs/supports that have a bit of Star Generation Up to make use of her high Buster hit counts.