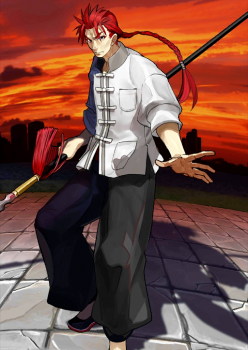 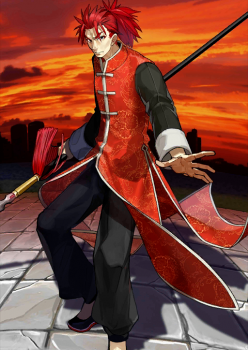 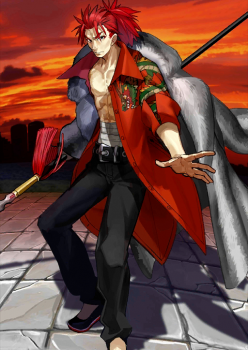 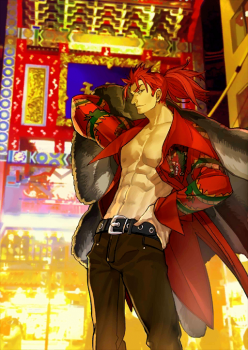 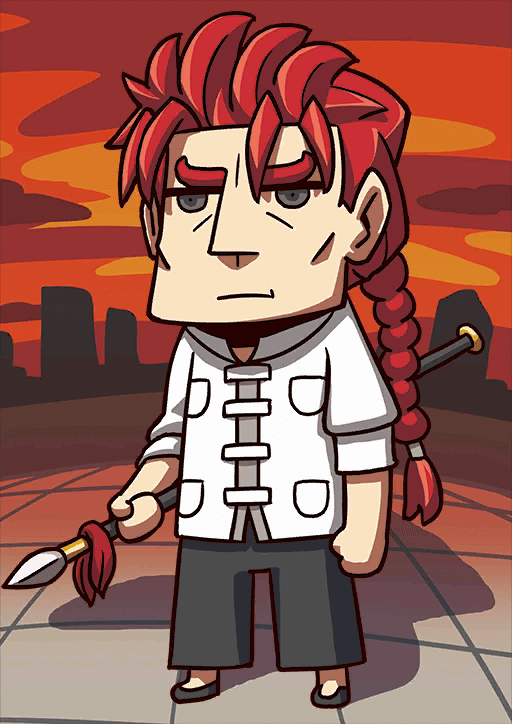 Apply Sure Hit to self (1 turn).
Increase own Critical Strength (1 turn).

Chance to inflict Death for a single enemy.

Chance to inflict Death for a single enemy.

Reaching the Zenith of My Skill

When equipped on Li Shuwen (Lancer),
Increase Arts Card performance by 15% while he's on the field.

Legends speak of “God Spear Li”, a Chinese martial arts master who never had to strike the same opponent twice. His aptly named Noble Phantasm: Shen Qiang Wu Er Da roughly translates to “God Spear, No Second Strike”, and is a single-target defense-piercing Arts NP that inflicts defense down (20%) for 3 turns. With one of the few accessible Arts-type NPs on a Lancer-class servant, Li Shuwen has a unique place in the Lancer roster.

With decent base Attack, a chunky 50% Arts Performance buff in Juezhao, and the Lancer 1.05x damage modifier, Li Shuwen deals impressive burst damage with his NP even before his Rank Up. Masters can subsequently combine his burst with his Critical Gathering and 100% (!) Critical Damage skills, especially as his NP inflicts a strong Defense Down. The trinity buff-stacking of Arts Performance, Defense Down, and Critical Damage can lead to some really impressive Arts critical hits. Li Shuwen is also true to the chant of "No Second Strike" as his NP pierces defense buffs by default, while his skills enable him to pierce both Evasion and Invincibility.

Unfortunately, with one of the poorest NP generation rates in the Lancer class, Li Shuwen has great difficulty actually charging his NP in time. However, his largest problem is his overall incredibly burst-heavy nature. With all of his steroids lasting for a single turn, and carrying a 6 turn cooldown even at max, Li Shuwen struggles to deal consistent high damage. One can stagger his buffs to spread them out more, but this lessens the overall synergy between his skills. In addition, firing off all his buffs at once can waste many of the secondary effects his skills possess.

Thus, Li Shuwen is a capable Arts Lancer, but in an era of Break Bars his burst heavy nature is noticeably less useful. Masters with a preference for Arts teams will find him highly useful however, especially if they can supply him with Critical Stars.

Li Shuwen synergizes well with any Arts-based rosters. For Masters who prefer the playing style of Arts Servants, Li Shuwen is one of the few options within the Lancer class, which typically contains Servants with a QQABB deck. This capability alone grants him a unique position.

With 3 powerful single turn buffs with very high scaling effects, in an optimal setting Li Shuwen can utterly destroy one enemy if supplied with sufficient critical stars. Any NPAA critical chain can deal some staggering damage while also carrying a great deal of NP Generation for the next NP. His Rank Up will further improve his burst via his NP, while also buffing the defense down on his NP to 30%.

One of Li Shuwen's specialities is doing damage which cannot be impeded. With access to Defense-Piercing damage via his NP, Sure Hit via Chinese Martial Arts and Invincibility Pierce via Juezhao, Li Shuwen can deal with almost any enemy defense types. Do note that Pierce Invincibility also affects Evasion, making Sure Hit redundant that turn.

Li Shuwen's base NP gain of 0.52% is among the lowest of his class. While this is slightly offset by his two-Arts QQAAB deck, his Arts cards themselves are rather mediocre. Li Shuwen has to rely on support and frequent Arts chains to use his NP often.

Both his main steroids last for a single turn, and have a 6-turn cooldown at minimum. While this means that his damage output is potentially great, it will be in a single burst rather than consistently across turns. With the strongest opponents having multiple, but smaller, HP bars, this makes Li Shuwen relatively less powerful.

All of Li Shuwen's skills carry 2 main benefits. However, Masters typically want only one of those effects at a time, yet the synergy between his damage skills force Li Shuwen to often use them all at once. The Sure Hit buff can be made redundant by Invincibility Pierce, while Masters often forego the Evasion from Sphere Boundary for the Critical Gathering buff (or vice versa).

While Li Shuwen carries 2 Quick cards, his own star generation is rather poor. To fully make use of his critical damage buff, Masters will need to supply him with some additional critical stars. Fortunately, his Star Gathering buff ensures he won't need that many.

With all of Li Shuwen's skill scaling well with additional levels, and with their initial cooldowns being incredibly long, Masters are advised to at least level his skills to rank 6. Typically, improving his main Arts steroid is the most reliable way to boost his overall performance as it improves his generation capability as well.

Due to Li Shuwen's burst heavy nature, Masters can go in a variety of directions. Starting NP Gauge is highly recommended for his general use as charging his NP otherwise can be very taxing. Masters can bring NP Damage Up to further improve his burst capability - yet Arts Performance Up and Critical Damage Up work very well to shore up his performance when his skills are down. That they stack additively is not such a big deal compared to the overall benefit. Lastly, Critical Star Gathering can ease the stress on Li Shuwen's Evasion skill.