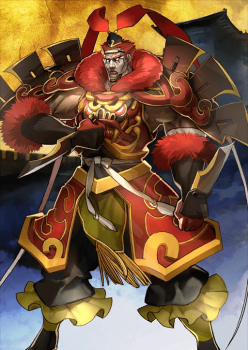 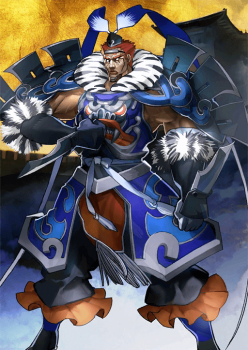 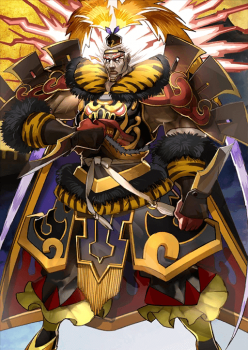 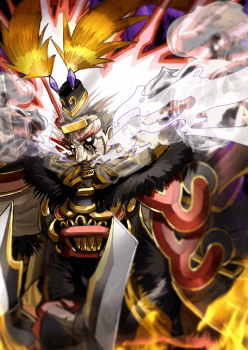 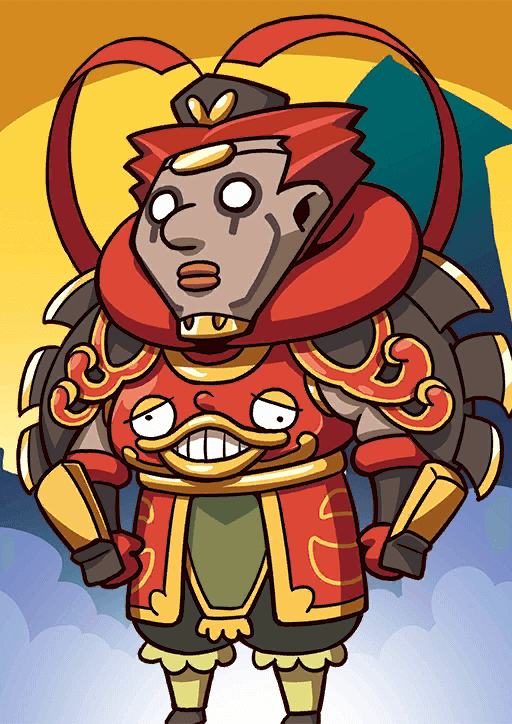 Self Star Gather Rate Up Party DEF Down [Demerit]

Low chance to inflict Stun on a single enemy (1 turn).

Five Weapons of the War God

When equipped to Lu Bu Fengxian,
Increase Buster Card effectiveness of all allies by 15% while on the field.

“Yikes! Was he just glaring at me?”

The ruthless warlord notable for betraying everyone he ever worked for, storms in to crush his enemies for any Master who would risk commanding him. True to his nature, Lu Bu serves as a fragile Buster Berserker Servant quite capable of bursting any hapless enemy down, and then causing trouble for his allies.

Lu Bu mainly acts as one of the strongest budget damage dealers in the game with an incredibly powerful Noble Phantasm, especially considering the ease in bringing him to NP5. The combination of Madness Enhancement A, his Valor skill that further increases his very high base attack, and Chaotic Villain to increase his NP strength – all of which stack multiplicatively with one another– Lu Bu has the potential to outperform even his higher rarity counterparts. Beyond that, Chaotic Villain will also boost his Star Gathering to insane levels, allowing him the capacity to unleash a devastating NPBB critical chain. As an added kicker, his NP comes with a low chance of stunning the opponent for a turn and ignores the defense buffs of his opponent.

Yet, while Lu Bu’s burst is one of the best in the game, it is best defined as the “trick” of a one trick pony. He suffers from low effective NP gain due to having access to only a single Arts card, has to rely on others to generate critical stars for him, and he has next to no survivability with one of the lowest 3-star HP values in the game on top of the Berserker class defensive disadvantage. To make matters worse, his one defensive skill, Defiant, grants a fair 25% defense at the cost of reducing all offensive buff success rates on him by 50%. This means that normally guaranteed buffs like Charisma will have a 50% chance of missing him for 3 turns. Lastly, true to his nature as a betrayer, his Chaotic Villain skill will also reduce the party’s defense by 20% as well.

All in all, Lu Bu is an incredibly selfish servant with huge damage potential, but a huge amount of support is needed to let him perform at his best. Masters who provide him with this support will find themselves rewarded with some rather impressive damage numbers.

Lu Bu has the capacity to dish out major damage for one turn against a single target, thanks to the benefits of Valor and Chaotic Villain along with his Madness Enhancement A and high base attack. His defense-ignoring NP consistently ranks as one of the most powerful in the game, and comes with an added low chance to stun. For a glass cannon, Lu Bu carries one hell of a punch.

Lu Bu’s Chaotic Villain gives him a significant boost to his star gathering, boosting his star weight to absurdly high levels. When paired with enough critical stars, critical buffs and/or a CE to increase critical capabilities, Lu Bu can deal devastating Buster crits on the same turn as his NP.

When not on Lu Bu’s burst turn, he still manages to provide decent damage for the team thanks to his 3 Buster cards, an 1.1x inherent Berserker modifier, and a three turn duration on his Valor skill with only a five turn cooldown. Furthermore, even without an NP available, he is still capable of using Chaotic Villain to launch a devastating BBB crit chain.

As Lu Bu has low HP and suffers 2x damage from almost all enemies, he will not last long on the battlefield if targeted. To make matters worse, his Defiant skill is a double edged sword. While it grants him up to 25% extra defense, it is hardly enough by itself  to overcome his defensive disadvantages, and in exchange every offensive buff has 50% less chance to apply to Lu Bu. Still, Masters can try to circumvent the offensive demerit by applying his attack buffs before activating Defiant.

Lu Bu will need support to NP consistently, as his deck has only one Arts cards and he is too fragile to charge his NP defensively by getting hit. Without an NP generation skill of his own, he often will only fire one NP per fight before dying.

Lu Bu carries no teamwide buffs or skills to aid Masters who would bring him. In fact, his primary NP steroid, Chaotic Villain, gives his team a nasty 20% defense down demerit for one turn.

Lu Bu packs an array of great skills if used properly. Priority should be given to skills that allow him to hit harder during his burst, ideally to skills with high uptime. While Defiant does grant him a bit of survivability, it can generally be leveled last as Lu Bu is often left to die after firing off his damage.

With access to such a powerful NP, the primary concern for Lu Bu is getting his NP ready as quickly as possible to dish out the major damage, with a secondary concern of improving his damage even more. As such, Masters should primarily equip him with Starting NP Gauge, while Buster Performance Up scales very nicely with his two main steroids. Critical Damage Up works very well with Chaotic Villain, while going full ham with NP Damage Up can be an extreme nuke option.

Busti's Stall Diary Chapter #500: Woah, we're halfway there
Well, who would have thought that we would ever get this far when things started? Half…
Let's have a real 5th anniv talk
Fate/Grand Order fifth anniversary. The anniversary that has changed everything, made…
Do you think they'll shift the Ooku rerun until after the anniversary?
In JP, the anniversary was after the Ooku event rerun, but considering NA anniversary…
Castoria
G&A reviews made a spotlight for her which surprised me, wasn’t she supposed to…
Playing FGO on TV Questions
So i just bought a Typc to HDMI Adapter and connected my Samsung S9 to my TV to Play…
Read More