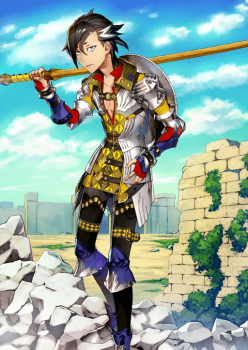 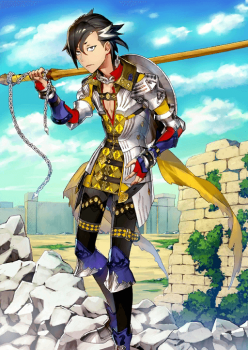 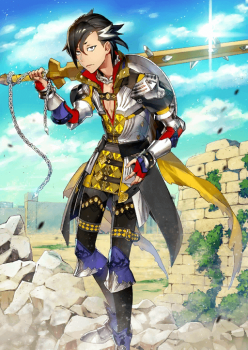 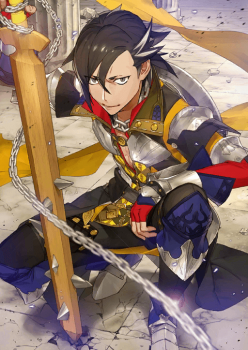 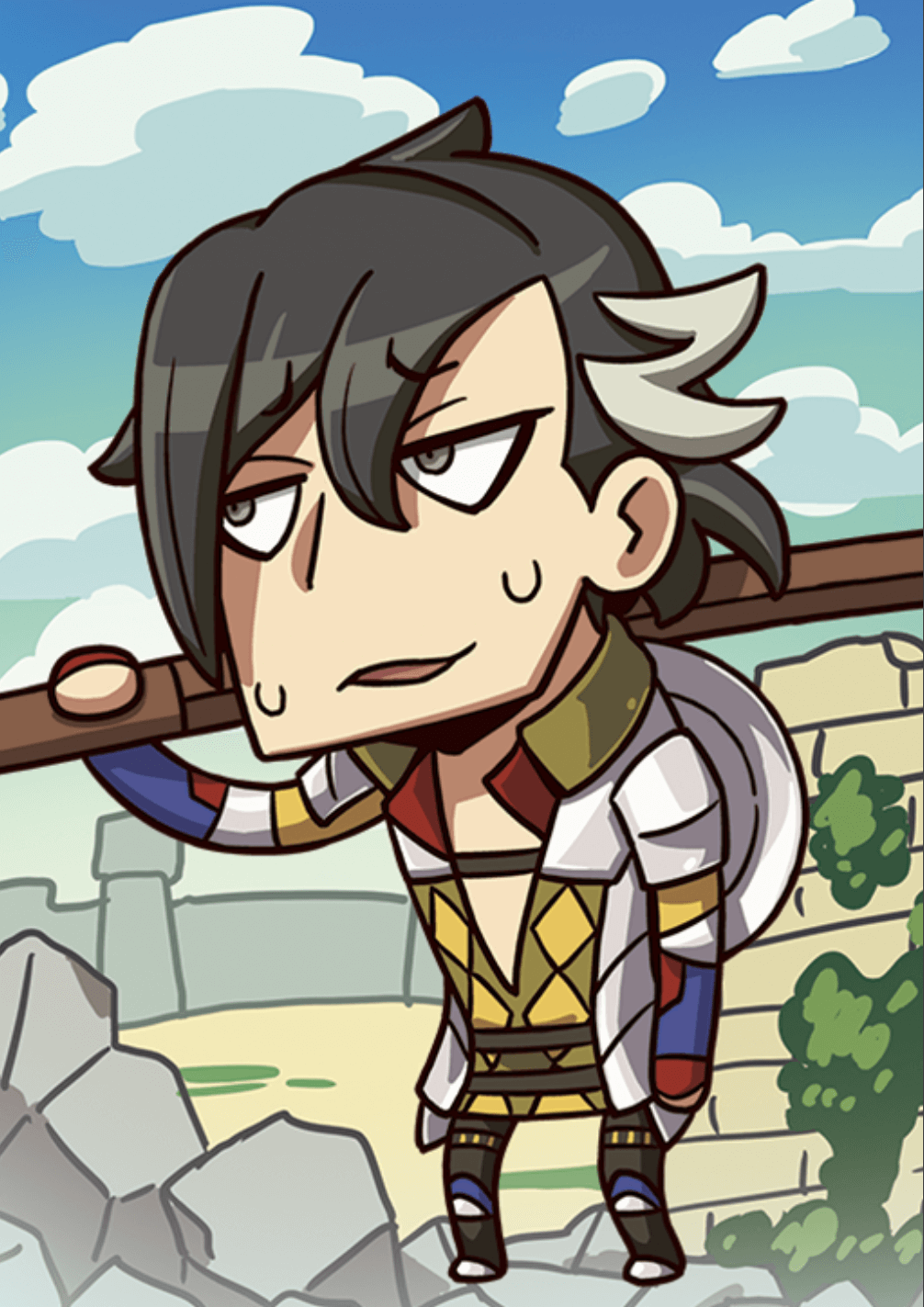 Self Crit Damage Up Buff Removal (Defensive) Self Death [Demerit]

Armor of the Nine Worthies A

Increase own DEF (3 turns).
Increase ATK for all allies (3 turns).

The Sword that Breaks, When the Battle Concludes

When equipped on Mandricardo,
Increase all allies' Attack by 20% and Defense by 30% when he is defeated.

“Wow, you’re really doing all this for a third-rate Servant like me?”

The breakout star of Atlantis, our friend Mandricardo is a relatively straightforward ST Arts Servant. Mandricardo makes up for his 3* status with strong general-purpose damage buffs, letting him compete effectively with his higher-rarity competition. He also brings a little bit of utility to protect the team and can remove himself from the field when his job is done. While Mandricardo may not be a flashy Servant, he’s still a strong option every Master gets access to, and for that, his service is appreciated.

Mandricardo’s kit is filled with ways to increase his damage. Armor of the Nine Worthies and Brigliadoro’s Neigh both provide sustained damage boosts for Mandricardo, helping him to hit harder over multiple turns, especially if he can loop his Noble Phantasm. Speaking of his Noble Phantasm, Serment de Durandal also provides a damage boost before dealing damage, further increasing Mandricardo’s damage output. Especially with the help of strong Arts supports, Mandricardo has good enough NP gain to use his NP multiple times in a row, letting him take advantage of these sustained damage buffs.

While Mandricardo is good at outputting damage, he doesn’t do much else well. Brigliadoro’s Neigh lets Mandricardo draw enemy fire for a turn, but, outside of a small defense buff, Mandricardo does not have good ways to survive the focused attacks. Additionally, Brink Shot causes Mandricardo to sacrifice himself, which, while it’s occasionally still a useful skill, means for general use purposes Mandricardo effectively only has two skills available. Mandricardo is also highly dependent on NP damage for his damage output, as between his low attack, his lack of critical attack damage buffs, and the attack demerit on his NP, Mandricardo’s normal attack damage will be quite low.

There are many powerful ST Arts Servants, and Masters with more established boxes may not have much use for Mandricardo, but he at least ensures every Master has a good option for dealing with Casters. Mandricardo’s skillset may not be the most dramatic, but it pairs good, sustained damage buffs with strong NP gain. He has everything he needs to take down Caster bosses with proper support, and that’s a great place for a silver Servant to be.

Mandricardo’s only defensive tool is a small defense buff, and his other two skills actually make him less durable, rather than more. Brigliadoro’s Neigh draws enemy attacks to Mandricardo, which, given his 3* HP, can easily result in Mandricardo’s death. Furthermore, Brink Shot kills Mandricardo outright, which means he cannot reach his maximum damage and also remain on the field without the help of Guts.

Brink Shot provides a strong damage buff, but it also kills Mandricardo, which makes it a skill that Mandricardo will only want to use in special cases. Furthermore, Mandricardo must be below half health in order to use the skill at all, making it completely inaccessible in a well-protected team. This means Mandricardo functionally only has two skills most of the time, which is never a good feeling.

Mandricardo has no critical damage buffs outside of Brink Shot. He also has low attack, and his Noble Phantasm reduces his attack on the turn it’s used. Taken together, this means Mandricardo will struggle to deal good damage with his cards. He is heavily reliant on his Noble Phantasm for his damage output.

Brigliadoro’s Neigh is Mandricardo’s most important skill, as it boosts both his NP damage and his NP gain via Card buffs. It should be leveled first. Armor of the Nine Worthies boosts damage and survivability and should be leveled second. Brink Shot will only rarely be used, so it can be leveled last. While Mandricardo needs Armor of the Nine Worthies and Brigliadoro’s Neigh at max level in order to function at his full potential, Brink Shot can be safely left at lower levels, as it will often go completely unused, and reducing its cooldown does nothing in practice.

NP Damage Up Craft Essences work especially well with Mandricardo, as Mandricardo has no innate buffs in the NP Damage bracket, and his damage is concentrated on his NP anyway. Starting NP Gauge Craft Essences also have value in that they make it easier for Mandricardo to use his NP quickly and repeatedly. Arts Performance Up and NP Gain Up Craft Essences can also help to increase Mandricardo’s damage output and stabilize his NP loops.

He used to be a king and adventurer!
In the course of his adventures, he was able to lay claim to Hektor's armor, and later set off on numerous journeys in high spirits in search of Hektor's sword, Durendal! But then...after fighting a terrible battle for Durendal, and many other tribulations, Mandricardo became the jaded, cynical man you see now. Nice to meet ya...

Height/Weight: 171cm, 68kg
Origin: Legend of Charlemagne
Region: Western Europe
Alignment: Neutral-Balanced
Gender: Male
He's one of those people who would feel embarrassed if the restaurant he frequents remembers his order whenever they see him.

This young man has a jaded and melancholy mein. He's aware of his status as a minor character in the stories in which he features and so often speaks in self-deprecating terms. He's the cautious, passive sort who constantly puts up safeguards on his own abilities.

In life, he was quite pompous, believing himself to be superior to all. However, his inability to defeat Bradamante's lover, Ruggiero, even while wearing Hektor's own armor and wielding Durendal, shattered his confidence. He is now quite self-effacing in his interactions with Master. He's the sort who would be dreadfully concerned about his ability to communicate important information in a Grail War.

At the very least, he becomes confident during battle, just to hype himself up.

Armor of Nine Worthies: A
A skill that sublimated from the legend of Mandricardo wearing Hektor's armor. The numerous epic tales that revolve around Hektor reinforce Mandricardo's body, and the armor's overwhelming legendary power manifests as artificial Charisma.

Brigliadoro's Neigh: A
A skill that sublimated from the legend of Mandricardo stealing and breaking in the famed steed. Mobility, ATK, and reputation rise. But in return, he becomes an even more appealing target for his enemies. Additionally, this skill will enable him to steal and ride any mount, even Demonic Beasts, as long as they are C rank or lower.

Oath To Never Bear a Sword.
This Noble Phantasm arises from the legend of Mandricardo swearing never to carry a sword until he lays claim to Durendal. In effect, his Noble Phantasm causes any weapon he wields to possess the power of Durendal itself. It is quite similar to Lancelot's Noble Phantasm Knight of Owner, but its more powerful because it has the same power as Durendal, and it handles exactly like Durendal no matter what weapon he uses. However, because it only copies Durendal's strength, its durability corresponds to the rank of the weapon he holds (which is usually E rank).