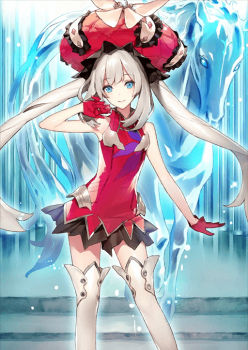 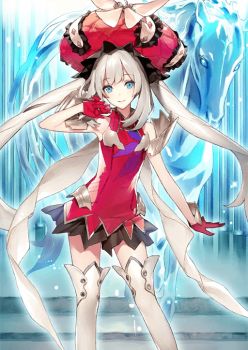 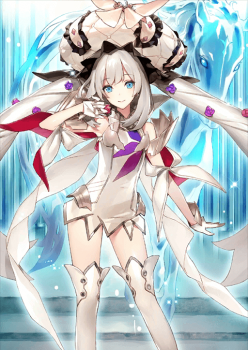 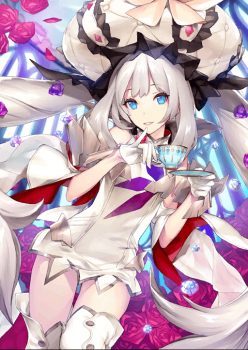 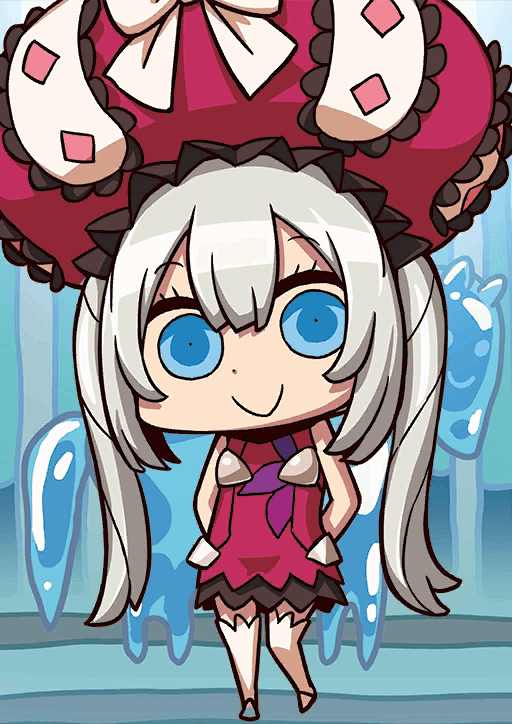 Chance to inflict Charm on a single enemy (1 turn).
Increase ATK for all allies (3 turns).

Apply Invincible to self (3 times).
Recover own HP each turn (5 turns).

Deal heavy damage to all enemies.
Remove debuffs for all allies.

Glory to the Crown of Lillies

Glory to the Crown of Lillies

When equipped on Marie Antoinette,
Increase Star Drop Rate of all allies by 20% while she's on the field.

The Queen of France whose life was cut short in the chaos of the French Revolution, Marie Antoinette, rides into battle as a durable Quick-based Servant who, ironically enough, just does not die. Vive la France!

Mirroring her skill set, Marie sacrifices her attack stat for a great deal more HP, letting her stick around in fights for a long time. Her signature skill Beautiful Princess brings a fantastic combination of hit-based invincibility and healing that stands as one of the strongest defensive skills in the game, rivaling the well-known Protection From Arrows. The rest of her skills provide a mix of defensive sustain and some utility effects, mostly eschewing offense entirely. Marie’s NP Guillotine Breaker deals a modicum of AoE damage, but more importantly forms the centerpiece of her team support, with its party-wide heal and debuff cleanse, as well as a party Critical Damage buff after its Rank Up. Overall, she leans very heavily on the defensive end of the spectrum and tends to prefer slower, longer fights.

Unfortunately, although Marie may be able to stick around forever with her invincibility and constant heals, her weak NP gain limits her on-demand aid to the team to just a high cooldown Charm. The weak NP gain is especially problematic because her NP is her main source of damage and team support. The downside of being a supportive Rider also rears its head; with the massive star weight of the Rider class, Marie is likely to steal critical stars from the Servants who want to be actually using them to deal damage.

Still, these flaws are nothing to lose one’s head over, and with careful play, the sweet Queen can be a durable, supportive asset. Her combination of absurd survivability and some party support is especially useful for any Starting Master.

Between the 3-hit invincibility of Beautiful Princess, which doesn’t expire until it gets used up, a combination of healing per turn and burst healing on demand, and the debuff clear on her NP, Marie is one of the most resilient Servants in the game. While the values on her heals are merely decent when taken alone, the sheer frequency with which they are applied makes her one tough target. Additionally, her NP provides a teamwide heal and debuff cleanse that supports the team with sustain and consistency, and in the future a small Critical Damage Buff.

Thanks to the Mental Debuff success rate buff on God’s Grace, Marie can reliably land her Charm against male targets, maintaining a high success rate even on Servants with high Magic Resistance or other sources of Debuff Resistance. Due to the differences in cooldown between the skills, Masters may sometimes need to make a trade-off between optimizing healing and landing the Charm.

Easy to Use Starter Servant

Marie can be rolled in the initial tutorial roll and may be a Master’s first rare Servant. While Marie lacks the offensive power of her competitors, her sheer durability will make her a great companion in the early game when resources and options are limited. Future Quick Support and her own Rank Up will also greatly aid her in her potential as a farming Servant, as her 5-hit AoE NP has decent refund potential.

Most Servants who specialize in durability or minor team support tend to have low offensive presence, and Marie fits right in with that paradigm. Marie's bulk and star weight ends up being a liability in most teams, as she lowers the chance that a team’s main damage dealer will get critical stars, while her own QQAAB deck and lack of offensive steroids make it difficult to do good damage with her. While her future Rank Up (and accompanying Critical Damage buff) improves her damage a fair bit, her NP remains difficult to charge..

Considering Marie’s limited NP-dependent team contributions, it is a shame her poor NP gain hinders being able to actually bestow them reliably without CE or teammate support. With subpar NP gain on her Arts cards and mediocre NP gain on her Quick and Extra cards, it takes a while to fill her gauge. Despite having a high rank in Riding, her star generation on her Quick cards is still held back by low hit counts. The one saving grace is that if she can get her NP off, it will provide a fair amount of NP refund and create a moderate amount of stars thanks to being an AoE Quick NP with a decent hit count.

Marie’s main strength is her absurd durability, and her leveling order reflects this fact. Focusing on her signature Beautiful Princess enhances her survivability in multiple ways, while God’s Grace contributes a little more healing and some debuff consistency. Siren Song is dependent on God’s Grace to be reliable anyway, so it has less priority for leveling.

Marie focuses on staying alive through drawn-out fights while providing some support and utility to her teammates as they grind down enemies. She benefits strongly from supportive effects such as Passive NP Generation, Passive Star Generation, and Starting NP Gauge CEs. Healing Effectiveness is a niche choice in case one is banking on her durability through healing.

Passive Critical Star generation is an extremely powerful effect on any supportive Servant, especially one like Marie who runs the risk of vacuuming up more stars than she otherwise creates for the team. 2030 will provide the maximum passive star generation, while His Rightful Place trades some star generation in favor of Starting NP Gauge.

Due to Marie’s suitability for long, grindy fights and her relatively low NP gain, a flat passive charge per turn goes a long way toward helping her support the team better with her NP. Prisma Cosmos significantly lessens the need to use Marie’s basic cards for NP gain and actually provides a chance to get her NP off multiple times in a long battle if necessary.

Due to her weak overall NP gain, Marie benefits from Starting NP Gauge greatly if she intends to get her NP off in a timely fashion, or potentially loop it with outside support. Kaleidoscope provides the maximum starting NP gauge, while Imaginary Element is a budget option. Knights of Marines trades some NP gauge for a Quick buff which benefits Marie’s primary card type, while Holy Night Supper grants slightly more NP damage (multiplicative with her Riding) and some critical damage.

With the frequent self-healing coming out of Marie’s kit, Maid in Halloween serves as a way to enhance her already good natural bulk further. It also benefits the healing received from any other sources as a bonus. The Scholars of Chaldea provides a lesser healing effectiveness buff, while giving her some much-needed Starting NP Gauge. Street Choco-Maid buffs Marie’s Arts and Quick cards, which compose the majority of her deck.

The Queen of France born into the House of Habsburg.
The Fleeting Lady. She is queen to the 18th century king, Louis XVI.
She is the symbol of the rule of European nobility over the people.
As society changed and the royals lost their authority, she lost her life before she could witness the change.

An idol by birth.
She could soothe the masses with a smile, and gains adoration with a gaze.
She was pleased that she was an idol born to be loved, and acted as those around her desired.
Her attitude is no different from that of goddesses.

God's Grace: B
A skill that represents the "Royal Beauty," which grants her perfect features.

Beautiful Princess: A
The charisma to attract people around her.
Her very presence can attract knights to protect her.

Siren Song: C
Casts Charm on her targets, but can also be used to declare her royal authority.
She can deal magical damage to her enemy through her alluring songs as long as she is a symbol of royal authority.

During the revolution, she became a symbol of hatred for many people.
However in modern France, her reputation is recovering.
She used royal funds to help people during a famine, and asked other nobles to help the people.
It's been confirmed that she was a woman who loved the people.

Her life ended tragically, however...
She would never ask the Grail to erase that tragedy.
All she would ever wish for is for her to fulfill her duty.
To give light to heaven, bless the earth, and finally, grant happiness to her people.