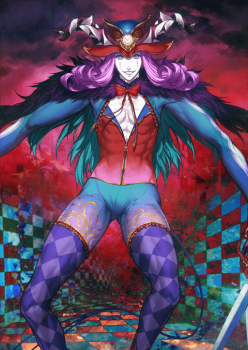 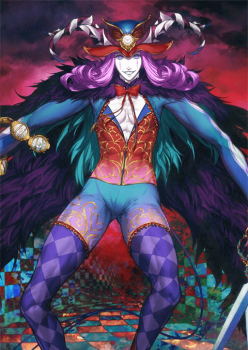 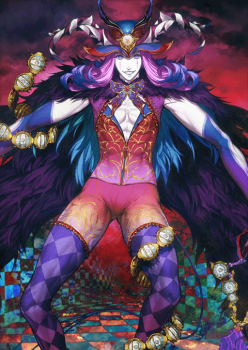 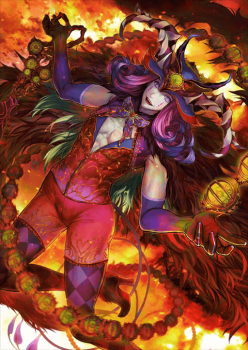 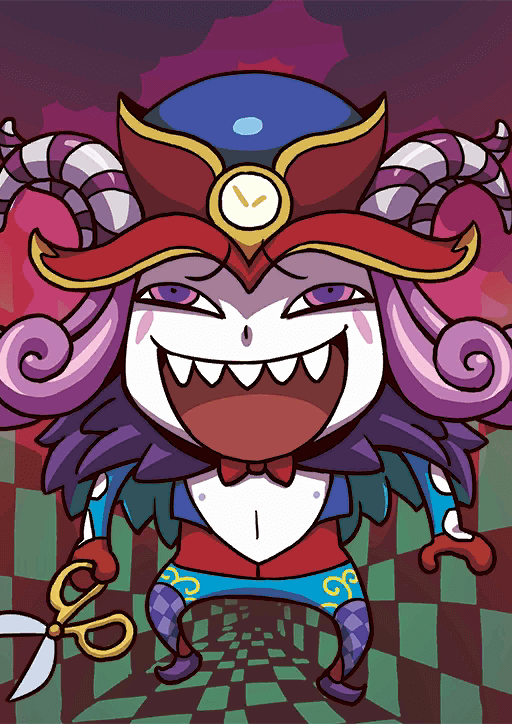 Star Regen Self DEF Down [Demerit]

Chance to decrease NP Gauge for a single enemy by 1.

Increase your Arts Card effectiveness by 7%.

Medium chance to inflict Curse for all enemies (3 turns).

Inflict Curse for all enemies (3 turns).

When equipped to Mephistopheles only,
Increase NP Strength of all allies by 20% while on the field.

Mephistopheles, the demon of temptation, materializes as a Caster class Servant. He runs a QAAAB deck with a Buster type AoE NP. This inability to do NP-B-B chains limits both his damage potential and his Arts chaining potential. Although his NP ignores defense and inflicts curse, his low attack stat means that he still won’t be doing much damage. In fact, he even ranks among the lowest in NP damage for Buster NPs.

His skill set contains a mix of miscellaneous effects, including an NP gauge drain and critical stars per turn with a defense down demerit. Most notably, his post-Rank Up third skill is one of the only Buff Block abilities in the entire Servant roster (and comes with bonus curse damage). His Buff Block skill will absorb up to three buffs, which can be substantial in encounters where enemies use dangerous buffs. However, in most situations fielding him for his Buff Block skill ends up being suboptimal due to his low damage output, making him a highly situational pick.

Overall, Mephistopheles is a niche Servant that offers very unique Buff Block utility after his Rank Up, but is a poor pick for damage output. He will have trouble doing enough damage to be an effective farmer despite his AoE Buster NP.

After his Rank Up Quest, he can inflict a Buff Block status that up to three buffs on a target enemy, which can be useful in certain encounters. Note that the buff block never expires until three buffs have been absorbed.

His low stats, 0.9x Caster class multiplier, and no self damage buffs land him at the second lowest Buster NP damage in the cast, second only to Gilles de Rais (Caster). He can and will have trouble clearing some farming quests without additional support. He also lacks the ability to chain his Buster NP due to his Triple Arts card setup, further reducing his damage output.

Aside from his Buff Block skill, which is decent, his other skills are somewhat lackluster. The NP charge drain skill primarily functions as a stalling skill, but given his poor damage and lack of other supporting skills, he does not fit the stalling niche as well as some other Servants. Additionally, the amount of critical stars from his second skill is modest, but is accompanied by a sizable 18% defense debuff. Given his other skills, he does not quite fit the niche of a critical support. In short, his skills do not particularly synergize well with each other.

Curse A: Curse is decent for boss fights, as it can delay Noble Phantasms from bosses. Leveling this skill is only useful for reducing the cooldown and improving its likelihood of success (although even at lv10 it only has a base success rate of 80%).

Innocent Monster B: This skill allows him to provide some critical support by generating stars, and leveling this skill will increase the amount of stars generated per turn. Out of his three skills, this skill is more useful in a variety of situations, and is worth leveling first.

Clown’s Laughter A+: This skill may be the reason a Master is looking to use Mephistopheles, given how unique the skill is. Levels in this skill increase curse damage up to 1000 per turn over 5 turns, whereas the Buff Block effect remains fixed. In most cases the Buff Block effect is more desirable, and since it is not affected by additional levels this skill can be leveled last or kept at rank 1.

OVERALL: Mephistopheles can make do as a farming Caster with some starting NP gauge or NP damage CEs. NP Damage Up / Damage Up / NP Generation craft essences work well with him.