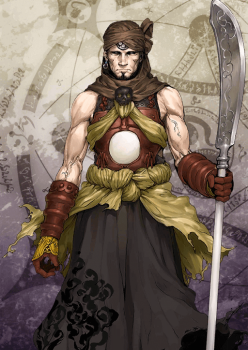 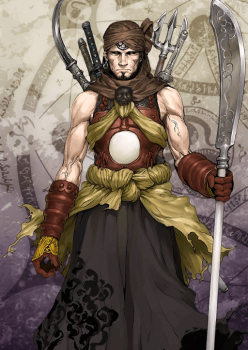 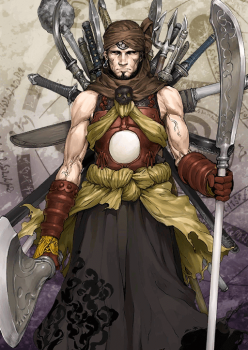 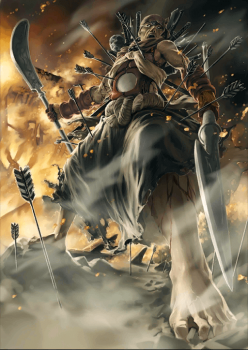 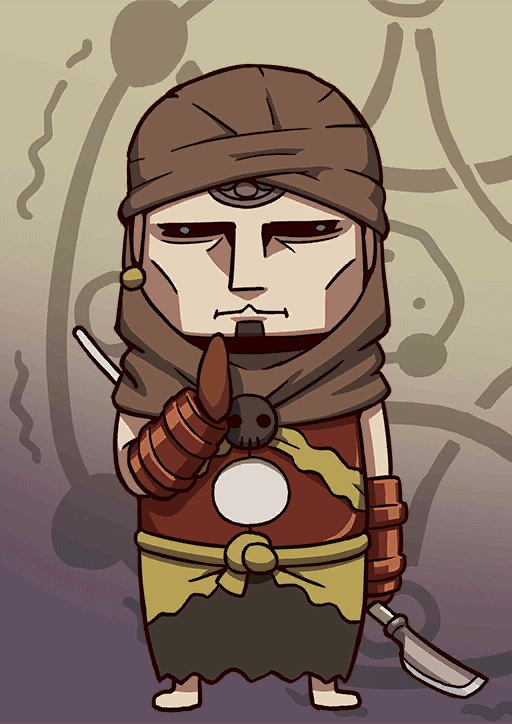 Chance to inflict Skill Seal on a single enemy (1 turn).

Chance to inflict NP Seal on all enemies (1 turn).

Increase your Debuff Resist by 16%.

Chance to inflict Stun for all enemies (1 turn).

Pilgrimage of the Five Hundred Arhat

Chance to inflict Stun for all enemies (1 turn).
Remove buffs from all enemies.

When equipped to Musashibou Benkei only,
Increase NP Gain of all allies when taking damage by 20% while on the field.

The only reason any player should use Benkei for is his Taunt. Even then, units like Saint George or Leonidas have a much better base skillset and are more suitable for the role at the same Rarity. Benkei's skillset and Noble Phantasm are truly mediocre and there is almost no justifiable reason to use him as a main unit in any team.

Imposing Stance is far and away his best skill. At max level, it is incredibly useful since it also has a Def up component. Benkei's main problem is the lack of Guts status to combo with it, but a Taunt that makes him take little damage for 1 turn for every 5 turns is worth leveling.

Both of his remaining skills are frankly lackluster. While Vengeful Spirit Exorcism has a higher success rate, the RNG nature of bosses in terms of using skills makes it a lot harder to utilize it to its full effect compared to Blank Subscription List. In the end, because both are quite bad even when maxed, players should not attempt to level it since with just his 1st skill he's already decently useful unless Benkei serves as a pivotal member of your team (which will never happen).

The most famous monk in Japanese history, who earned his fame with Minamoto-no-Yoshitsune.
Even today, he is loved in various stories told through Kabuki and Joruri.
Many phrases stem from him, such as Benkei's guardian stance (standing firm with feet apart), or Benkei's Crying Spot (that point below the knee on the calf).

Height/Weight: 199cm, 88kg
Origin: Gikeiki, The Tale of the Heike
Region: Japan
Alignment: Chaotic-Good
Gender: Male
The shin isn't my weak spot, it just hurts a lot if you kick me there.

...Musashibou Benkei is a story.
Dauntless yet loyal, he is a big, strong man. Fought many battles together with Minamoto-no-Yoshitsune, and died standing like a man until the very last. Truly the ideal figure of a her.

...Musashibou Benkei is a hero. If he wields a naginata, weak soldiers' bodies will fly, and with one roar even hungry wolves will scamper away.
He is rumored to be the child of an ogre.

...Musashibou Benkei is someone hard to come by.
Unlike myself.
He's different, but as long as I'm claiming to be Benkei, I won't let anyone tell me that I'm weak.
That should be a consolation for me chickening out.

His real name is Hitachibou Kaison.
He was one of Yoshitsune's vassals, but fled from battle when Yoshitsune and his servants met their deaths.
Deeply embarrassed, he wandered Japan as a storyteller, telling the story of Yoshitsune and Benkei.

His wish for the Holy Grail is to make the courageous name of Benkei his for eternity.
That wish is already half granted, but Kaison is still deeply embarrassed, and will tell the story for eternity.