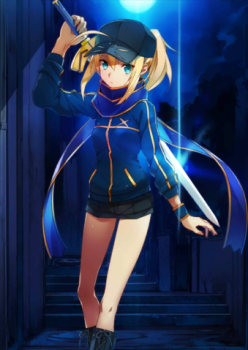 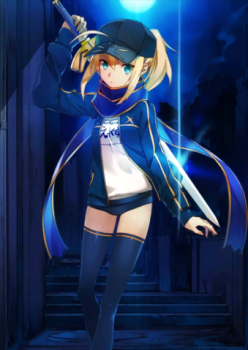 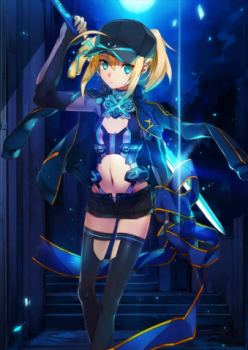 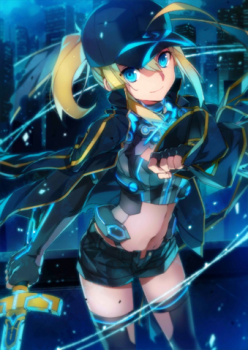 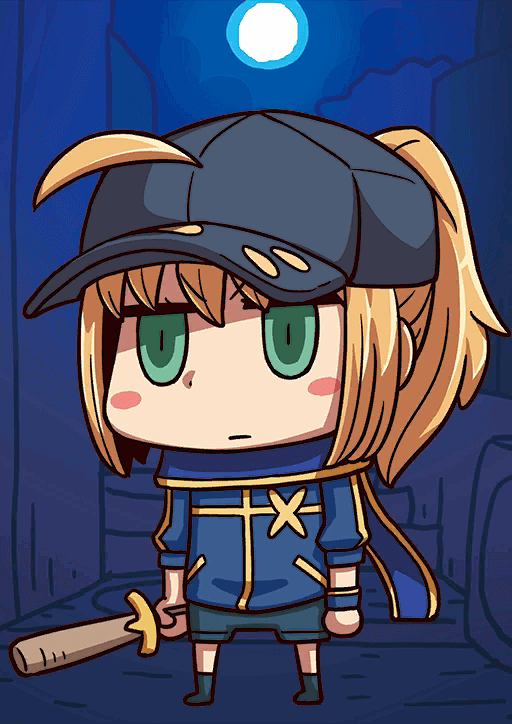 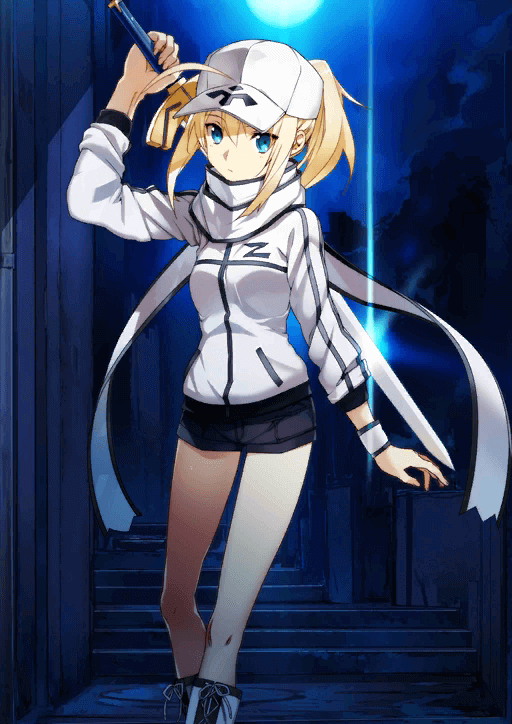 Gain a delayed buff.
After 1 turn, chance to Stun all enemies (1 turn).

Decrease DEF for all enemies (3 turns).
Gain a delayed buff.
After 1 turn, chance to Stun all enemies (1 turn).

When equipped on Mysterious Heroine X,
All allies will inflict 20% bonus damage against [Saber] while on the field.

“I am not an Assassin. I am definitely a Saber.”

In a Servant-verse far far away, Mysterious Heroine X has taken up the noble duty of exterminating all Sabers. Outside of an extremely narrow niche in destroying all Saberfaces, MHX is a Quick Assassin with very impressive bases, yet one that suffers under a very underwhelming set of skills.

Indeed, much of MHX’s potential lies in the base performance of her 4-hit Quick Cards and 12-hit upgraded Quick Noble Phantasm. With her good base NP Gain and Riding EX, her Quick cards not only produce a tidy sum of Critical Stars, they also produce a great amount of NP Gauge as well as refund potential on NP. As such, with proper Quick support, MHX becomes capable of launching her upgraded NP in rapid succession. In addition, after her Rank Up, she is rather durable considering she carries both an Invincibility on a 5-turn cooldown as well as an 80% of landing an AoE Stun. Finally, she does have a small niche in disposing of loathsome Saberfaces regardless of their class through the Overcharge on her NP.

Unfortunately, MHX’s skill set does not mirror the strength of her generation performance. Galactic Meteor Sword’s performance boost against Sabers is very narrow in its use, and any Archers will see a much larger performance boost from the effects of class advantage. Meanwhile, her Fire Support carries a massive 8 turns of cooldown at max rank in addition to its only 80% chance to hit. As a result, with no room in her skills left for general steroids, MHX’s damage performance without support is on the low side, having only her NP Interlude and Riding EX to draw on.

Thus, MHX ends up being a very solid Servant but because her niche is too niche, she is never truly the top option for any Assassin-related job. Even then is often outclassed by competing Assassin options when tackling her niche, such as Jack’s female bonus versus Saberfaces. Yet, her base performance is very strong and Masters should not underestimate the value a strong Quick Support can do to compensate for her skill set.

Above all, MHX’s NP Generation is consistently good rather than having any strong outlier. Due to her Riding EX and 4 hit Quick Card, her Quick Cards are on par in NP Generation with her Arts Cards. Thus, with a QQAAB deck to draw on, MHX can reliably draw variants of AQQ, AQA and AAQ with which to charge her NP Gauge. In addition, her NP can potentially grant a fair chunk of NP refund as well, courtesy of its 12 hits.

Featuring Cosmo Reactor A, Assassin base Star Generation and the off-class ideal Riding EX, MHX’s Quick cards produce a great sum of Critical Stars especially if she can launch her NPQQ chain. In addition, her Star of Saber can top off any generated Critical Stars to help unleash a turn of (guaranteed) Critical Hits.

Between Star of Saber and Fire Support, MHX is capable of lasting a fair few turns despite having being among the lower base HP pools among all 5* Servants. In addition, with a little help Star of Saber’s short cooldown of 5 turns helps enable MHX to potentially survive successive NPs.

MHX’s main claim to fame is her niche damage boost against both Sabers and Saberfaces. While her Anti-Saber damage is decent for mixed Saber waves (mirroring Berserker performance), her Anti-Saberface NP is more interesting as it grants a similar effective boost but also stacks with either class advantage or her Anti-Saber buff. Thus, its effective damage ceiling is impressive, but in practice it’s mostly useful to deal with Rider Saberfaces or Saberfaces which Masters may lack a good counter for such as Jeanne d’Arc (Alter).

With only her high base stats, NP Interlude, and Riding EX to draw on, MHX struggles to output the same burst damage numbers as her competitors. Only against Saberface targets can MHX potentially exceed the damage of her peers directly, otherwise having to rely on her advantage in unbuffed performance.

Even accounting for her lack of personal buffs, the remaining utility and niche isn’t very strong. Fire Support carries both an immense cooldown and its hit rate is spotty at best, maxing at 80%. Considering her favoured enemies tend to carry Magic Resistance as a passive, it’s reliability is  rather poor. Meanwhile, the anti-Saber Attack and Star Generation buff isn’t powerful enough to forego class advantage against Sabers.

Niche Is Too Specialized

While powerful, MHX’s Anti-Saberface niche is only rarely useful. In many cases, even against Saber Saberfaces, the lack of full class advantage is still too strong of a disadvantage compared to Archer Servants.

With all of her most important aspects unaffected by her skills, Masters can elect to leave leveling her skills for later when any pressing Ascension Material needs are taken care of. Still, Star of Saber is a great skill, and Masters are at least highly encouraged to try and maximize it.

Most offensive Craft Essences work well with MHX, but both Quick Performance Up and NP Gain Up stand out. Both of these effects improve her ability to unleash successive NPs, and while Quick Performance grants the most versatile boost to her performance in isolation, NP Gain works best if MHX is fielded with a powerful Quick Support. NP Damage Up, Critical Damage Up, Starting NP Gauge, and Attack Up are all very viable alternatives though. 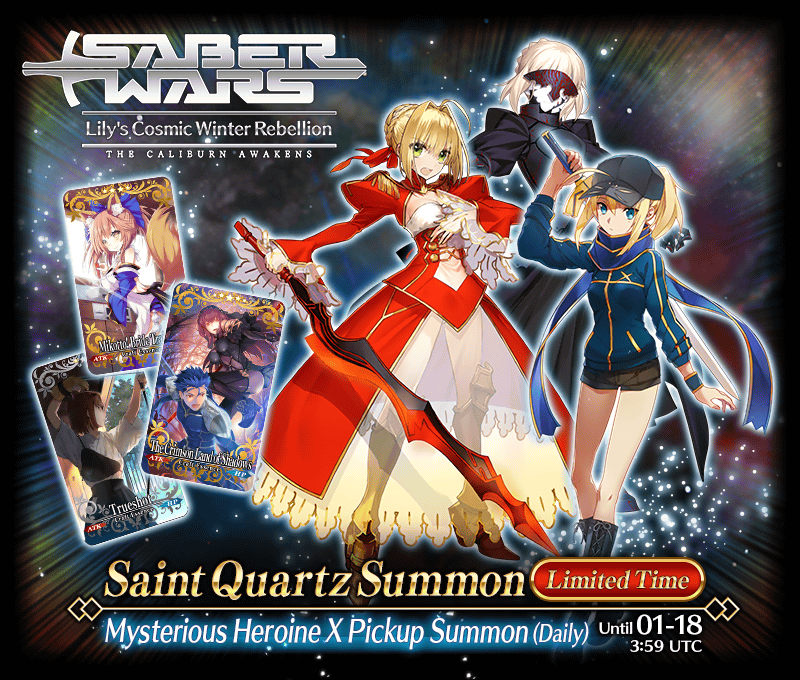