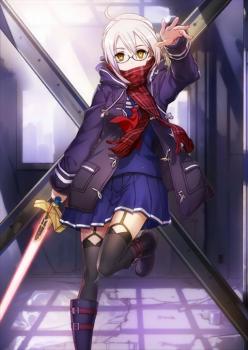 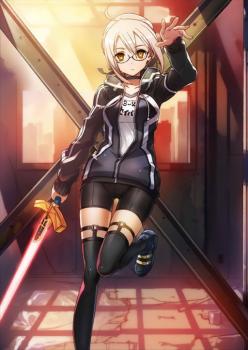 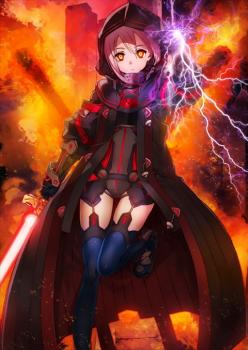 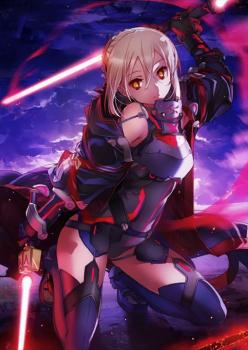 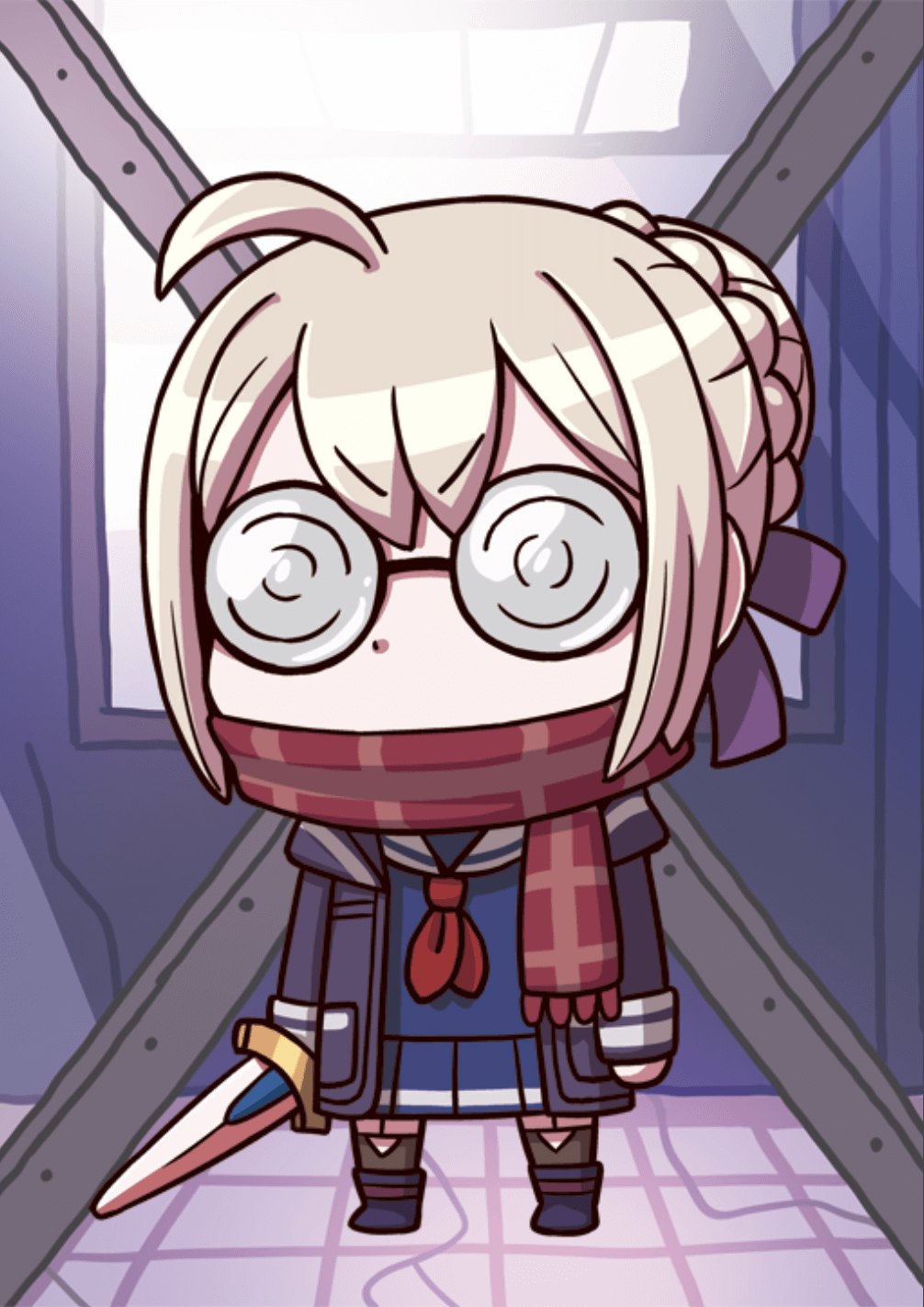 Upgrade via Rank Up

Decrease Critical Star Gather Rate for an ally by 100% (1 turn).
Increase ATK for all allies (3 turns).

When equipped on Mysterious Heroine X (Alter),
Increase ATK against [Saber] class enemies by 20% for all allies while she is on the field.

Mysterious Heroine X’s altered yet sane counterpart, the bookish Mysterious Heroine X (Alter) is a traveler with a sweet tooth from a Servant Universe far, far away. MHXA is a non-standard Quick Berserker with an Anti-Saber Servant Quick ST NP and the ability to manipulate Critical Star distribution.

MHXA’s primary strengths are her excellent NP generation and decent star generation for a Berserker. With a deck of QQABB, most of her damage is focused on using her NP rather than the more common Berserker focus on Buster Brave Chains, an NP she can use quite often. However, through both her Interlude and powerful Quick supports, MHXA can eventually unleash her full critical potential as well. Additionally, MHXA can both create stars on demand, and reduce the star weight of an ally, a combination which aids in and curates which Servants can get critical hits.

Yet, MHXA’s high HP and low Attack for her Berserker class is not an ideal combination for her role as damage dealer. MHXA’s damage potential in general is initially often lower than her fellow Berserkers given her lack of Buster Brave Chain potential and inability to fully profit from Madness Enhancement. She’s also rather fragile for high difficulty quests, where her own lack of hard survival tools and Berserker typing may lead to her death.

In the end, Mysterious Heroine X (Alter) is an atypical Quick Berserker Servant who can NP often, and provide some critical support on the side. While she will destroy Saber Servants with ease, MHXA may struggle to output the same damage as her Berserker competition. Fortunately, access to better Quick support and both an Interlude and a Rank Up will help to partly alleviate this issue in the long term.

MHXA’s base release pales in comparison to her future potential. Her Rank Up alone will shore up her performance nicely, but access to better Quick support in the future will especially cause her generation performance to go into overdrive. Although Skadi provides everything she would want in terms of damage (a Critical Damage & Quick Up buff), her survival will still remain an issue even if her Interlude upgrades her healing.

With high NP generation per hit, and superb hit counts where it matters, MHXA can quickly charge her NP and even provide a modicum of stars. Due to her high base NP gain, any Extra chain that begins with an Arts card will see excellent NP generation, especially with Overkill. While her Berserker class has low base star generation, her ability to perform an NPQQ Quick Brave Chain will result in enough critical stars to set up a critical turn.

Quick NPs often slightly outperform other card types when it comes to damage, and after her Rank Up, MHXA follows this pattern. With Access to both her Charisma-like King's Invisible Hand and Ephemeral Shadowless Blade, her NP damage is among the highest of all Berserkers. Given her NP gain and the high hit counts on her NP, it will even refund a nice portion of her NP gauge.

While MHXA’s kit does not revolve around her insane counterpart’s anti-Saber niche, her NP’s Overcharge effect still applies a significant damage bonus to any opposing Saber Servant. As a Berserker, MHXA can exploit this facet of her kit far more easily, making her NP hit for a metric ton of damage to any Saber Servant and capable of outdamaging even Archer Servants.

In addition to her decent star generation, MHXA has access to both an on-demand critical star generation skill as well as a unique targetable star gathering down in her King's Invisible Hand. The reduction in star gathering reduces an unbuffed Servant’s star weight to 0, which in turn can greatly reduce the stars required to guarantee a turn of critical hits for an ally. For example, using it on a Rider Servant may disable their star hogging characteristics for a turn, but likewise it can also be cast on a supporting Caster to draw even more critical stars to the main damage dealer.

MHXA’s biggest problem is extracting the full damage potential of her kit. Her card layout does not allow for any overpowering Buster Brave Chains, and her own star weight and lack of critical damage skills makes it difficult for her to do high critical damage by herself. King's Invisible Hand merely evens the playing field between her and the affected Servant, and she needs a healthy amount of critical stars to be able to pull off critical hits herself. In addition, she has rather low base attack for a Berserker, while her low rank of Madness Enhancement only affects her 2 Buster cards.

For day-to-day quests, the healing and the healing bonus provided by ∞ Black Bean Paste is generally enough to safely keep MHXA alive, especially after her Interlude. However, for harder quests, MHXA lacks access to an Invincibility or Guts skill that allows her to stay alive in the face of great damage. A powerful stray critical hit or NP will kill her without help from allies.

Until her Rank Up (and Interlude), MHXA’s skills are underwhelming. The main benefit to leveling her skills is to reduce their cooldowns rather than marginally increase their numerical values. Her damage potential only truly unlocks after her Rank Up, but investing in more damage is still the best way to go.

While MHXA can grant some part support through her star manipulation and generation, her main purpose is still to deal damage. Ideally, MHXA will focus on her NP for damage and thus prefers CEs that improve its damage or charge her NP faster. Quick Damage Up, NP Damage Up, and NP Gain CEs are ideal. For farming, Starting NP Gauge is always welcome.

Does the order of applied buffs matter?
During the current raid farming I noticed that my Sanzang’s NP damage varies quite…
Class Based Summons is Meh
Going through the upcoming Class based Summons and it feels like it is a much better…
Are Gacha the same as Life Service Games?
Always confused me. Which one is FGO? 3 posts - 3 participants …
Is it me or the raid is going really slow?
Is it me or the raid is going very slowly imo. 38 posts - 20 participants …
PSA: Barbatos Raid Kill Trackers Exist
These estimate the time to completion: https://fgo.square.ovh/na-case-files/ https:/…
Read More