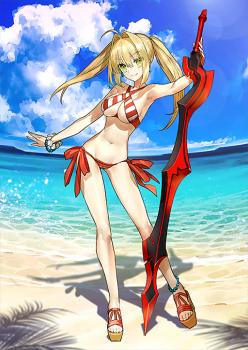 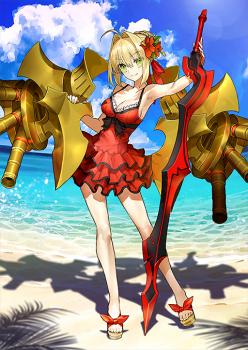 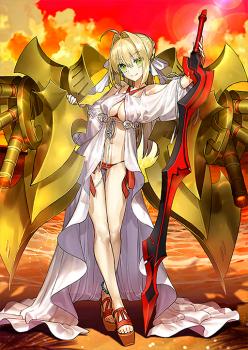 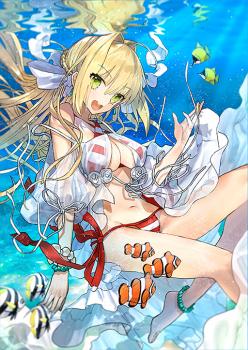 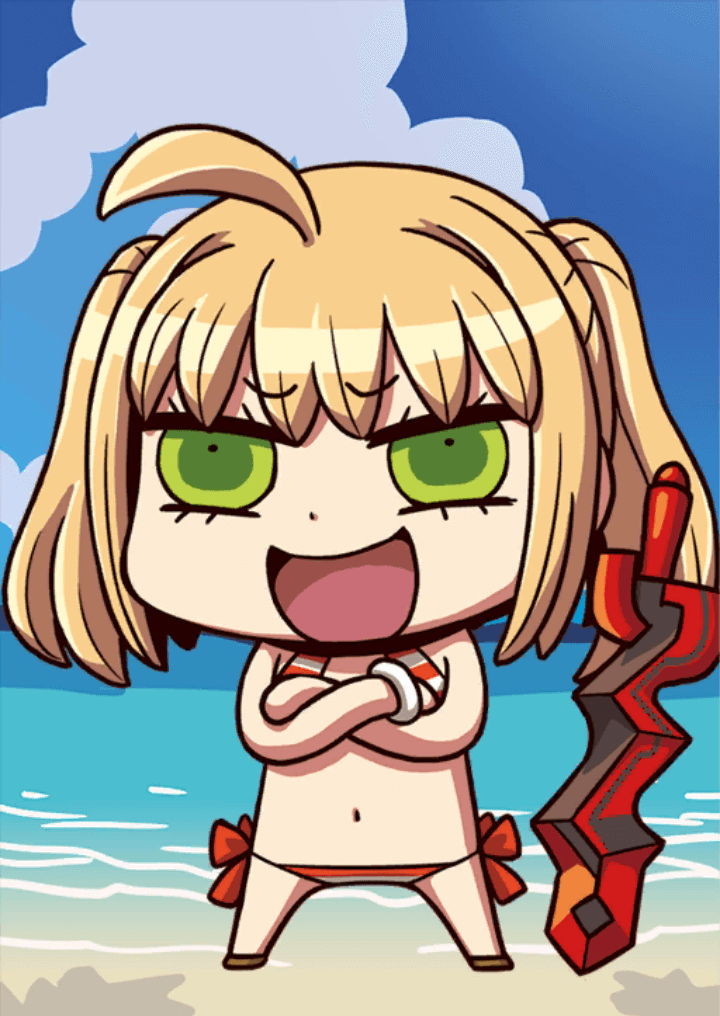 Increase your HP Recovery amount by 10%.

Apply Ignore Invincibility for yourself (1 turn).
Deals damage to all enemies.

"As this is a vacation, I have more freedom than usual! And I mean that in more ways than one. Even as a Servant, I cannot defy the magic of Summer. Know that it'll take more than a Command Seal or two to stop me, Master!"

A rose by any other name would still be a rose, and the Rose Empress exemplifies this as she dons her swimsuit. Taking full advantage of how she can shape her Golden Theater as she sees fit, Nero Claudius (Caster) delivers a sonorous aria via her AoE Buster NP, Laudatum Domus Illustris, the strength of which renders a keen and unforgettable experience to even the most stalwart of beings.

It’s rare for a Servant to have 3 skills impressive enough that each could be considered another Servant’s strongest skill, along with useful passive skills and, for a Caster, good base stats. Nero’s first skill Rampaging Privilege is a powerful battery skill that includes a strong, if conditional, NP Gain Up. Meanwhile, both Seven Crowns and Undying Magus offer a nice mix of defensive and massive offensive buffs to improve her damage and ensure her survival. Furthermore, Nero (Caster)’s Arts cards in particular generate a large amount of NP gauge thanks to their high hit counts and her Territory Creation. Thus, with an easily charged NP and hefty damage buffs, Nero possesses all the ideal characteristics of a farming Servant.

As far as weaknesses go, outside of Undying Magus’ ability to be given to someone else, Nero is a selfish diva, especially since Undying Magus will often be used for herself. Unlike many other damage dealers, she’s primarily reliant on her NP for damage, especially if her skills aren’t active. Her NP generation is also heavily focused on her 2 Arts cards as both her Quick and Extra card are relatively weak. In addition, for longer fights, Undying Magus’ cooldown is rather hefty, especially as it is often used just for the Attack buff.

At the very least, Nero (Caster) has all the tools she needs to farm well. Even for challenging content, her reliance on NP damage is not a huge detriment when she can potentially use her NP twice before her buffs expire, all the while Seven Crowns gives her a potent defensive option against difficult Berserkers or as protection in mixed nodes. Umu, a fitting stage is thus set for the Rose Empress.

When all of her skills are maxed and used on herself, Nero (Caster) has access to a 50% NP charge, 80% Attack Up, and a minimum of 20% NP Damage Up based on Overcharge, making it easy for her to prepare and slaughter foes with her NP. In addition, her BBAAQ will makes it easy to draw more damaging Buster chains which is ideal for finishing the toughest enemy in a wave.

Seven Crowns gives Nero (Caster) a unique defensive option by negating her Class’ weakness when taking damage from classes such as Alter Egos, Berserkers, and Riders, in addition to the Defense Up it provides. In the event she suffers lethal damage, Undying Magus can bring her back to 1 HP, possibly giving her an additional turn to act. Lastly, Item Creation (Strange) grants her an extra passive 10% received healing bonus, which often adds up over the course of a Challenge Quest.

While Undying Magus’ Attack buff is often used for Nero herself, Masters can grants its guts and up to 50% Attack buff to a different Servant. This is mainly valuable while farming as Nero often deals sufficient damage for wave 1 or 2 without it, leaving Undying Magus to the Servant that cleans up wave 3.

Nero (Caster)’s Arts cards are some of the best Arts cards in the game at generating NP gauge, thanks to their high hit counts and Territory Creation. This can be increased even more if she satisfies the conditional effect for Rampaging Privilege.

If provided with any form of Critical Star Generation Up, Nero (Caster)’s high hit counts on all but her regular Buster cards can make her an interesting active Critical Star generator.

Though she has decent hit counts for both her Buster and Quick cards, they are not as effective at generating NP gauge as her Arts cards. Thus, as even her Extra card isn’t very powerful, Masters would do well not to waste any Arts draws.

Each of Nero (Caster)’s skills have different cooldown times, ranging from 5 to 7 turns when maxed. With her main targetable steroid having the longest cooldown, setting up her full burst potential can be an issue in longer fights.

While Nero (Caster) possesses fairly strong defensive options in Seven Crowns and Undying Magus, they need to be paired with other defensive options to handle enemy NPs or critical hits as neither effects are sufficient to deal with high burst damage. In addition, Undying Magus will generally be used more often for its Attack Up potential than its Guts effect, which means the guts portion often goes to waste or is not accessible.

All 3 of Nero’s skills are powerful, to the point that raising them to 10 is just as important for the improved effects they provide in addition to the accompanying cooldown reduction. That said, Rampaging Privilege is generally the most important skill to level as a 50% NP Charge opens up a whole plethora of CEs with which to still activate an NP Instantly. Afterwards, Masters ought to level Seven Crowns and Undying Magus concurrently, as Seven Crowns grants sustain while Undying Magus provides more burst potential.

Like many of her strong NP battery peers, Nero (Caster)’s Rampaging Privilege makes it easier for her to use stronger CEs and still rapidly NP. Hybrid Starting NP Gauge CEs that offer 50% NP Gauge are attractive to enable her to NP quickly. For improving damage, Nero (Caster) is best off using something that provides Buster Performance Up, NP Damage Up, or a combination of the two. Attack Up is less useful for her if she’s using Undying Magus for herself, but otherwise it’s an alright option to consider.

"Summer means a resort.
A resort means a luxurious hotel.
And a luxurious hotel means a specialty arena!
Emperor Nero has changed this golden theater to summer specs, ready to prism IN towards the summer sea! Got it?
I'm taking the sunlight to ride the flowing water!
This time for sure, I will have my song echo through Chaldea!"

Rumor has it that this class is a better fit for her than the Saber class.

Height/Weight: 150cm, 42kg
Origin: History
Region: Rome
Alignment: Chaotic-Summer
Gender: Female
Surprisingly, even when she's a Caster, her status is no different than when she was a Saber (excluding her Noble Phantasm).

A self-proclaimed universal genius.
She was a cross-dressing beauty as a Saber (or so she says), but this time around, she is not hiding the fact that she is a beauty, and is enjoying the summer ocean wholeheartedly.
She may love herself, but she also loves the people around her. Combining narcissism and philanthropy, the fifth emperor of Rome has a truly interesting set of values.
Utilizing all her knowledge learned from the mage Simon to its fullest extent, Emperor Nero created a Mystic Code, or rather a Theatrical Code, for herself.
The pipe organs floating on either side of her body converts her beautiful voice to ATK, and gloriously shoots out lasers, fireworks, and bombs.

So how does a singing voice cause damage, you ask?
Nero still has yet to realize the cruel truth.

[Laudatum Domus Illustris]
Rank: A NP Type: Anti-Army
Maximum Capacity: 500 persons
Glorious Song, Golden Theater.
Just when you think that the wind pipe instruments were added to the golden theater, you realize they are actually cannons.
It's unclear whether this was someone's wild idea, or if the architect was of sound mind. But...pipe organs really do look like artillery. Such is the complex history of how this musical theater fortress was born.

As Nero acquired her Spirit Origin as a singer, she is demonstrating that talent to its fullest extent.
The golden theater is not limited within the theater walls, and her singing voice can be heard outside by simply pointing past its walls...instantly making it an outdoor concert stage.

Rampaging Privilege: EX
A skill altered from Imperial Privilege.
It is derived from the story of Olympia running amok with a chariot. It's like a skill one learned from a former trade...a skill that promises first place, no matter what.

Dreams for Summer: A
Beach Flower, Nero version.
While showing off one's own beauty, the beauty is for those who smile on the beach. However... (That was lost from the skill...)

Seven Crowns: C
Its scent thickens the sword and sharpens the armor.
Its method becomes vague, any disadvantages become meaningless.

Undying Magus: A
Magecraft learned from Simon Magus, her erstwhile mentor. Simon offered himself up for beheading, and resurrected.

Last time, Nero fumed at not being invited to the festival in the southern isles.
This time around, she prepared herself by getting a swimsuit to be certain she would be ready to join the festivities. That's about when the Ishtar Cup began, so she signed up enthusiastically.
However, she discovers that she needs a teammate, so she pulls Altria Alter aside, who was just passing by, and a miraculous team was formed.

Her favorite car is the Red Venus.
For any of you wondering why the name Venus was used, go check out "Fate/EXTELLA."

Her philosophy of racing is very aggressive.
She'll tail anyone ahead of her, bang into them a few times, and then pull ahead.

As Nero considers all teams to be good rivals, her ideal method would be to tap into the competition's good racing features while besting them.
Alter, on the other hand, couldn't care less about that sort of thing, and simply tries to win. As their goals are essentially the same, they actually don't fight...making them a miracle team.