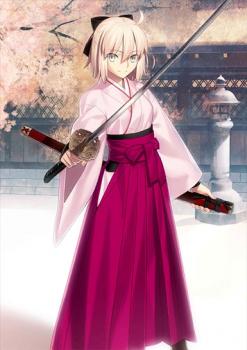 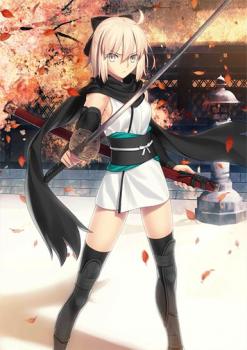 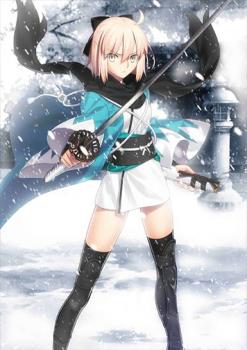 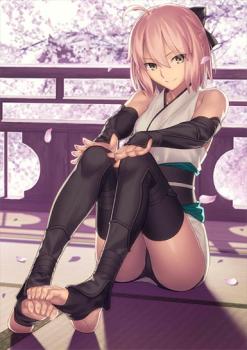 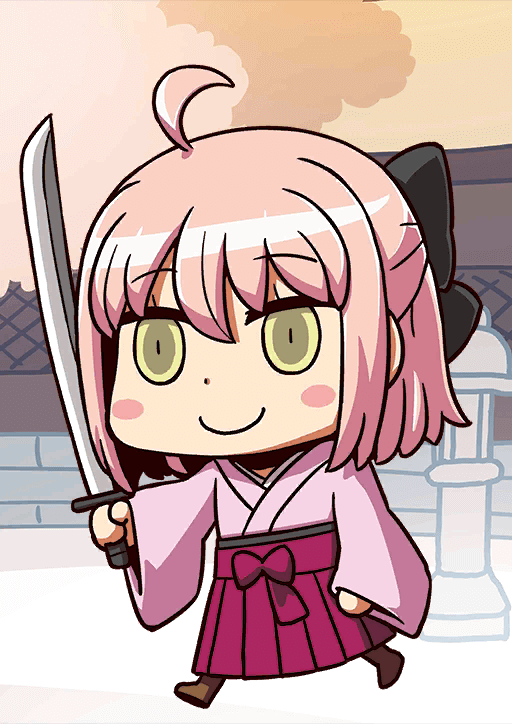 Increase your Quick Card effectiveness by 2%.

If equipped to Okita Souji,
Increase Critical Damage of all allies by 25% while she's on the field.

“There is no good or bad on the battlefield, only death!”

Okita Souji, Captain of the First Unit of the Shinsengumi, is a deadly sword prodigy who brings despair to her enemies on the battlefield… as long as she doesn’t fall prey to her tuberculosis first. Okita is a powerful Quick-based Saber whose single target NP, insane NP generation, and self-sufficient critical game make her a fantastic boss killer despite her origins as a joke Servant.

Okita’s performance in fights benefits greatly from her well above average ATK stat, one of the highest of all Sabers. Her kit is self-sufficient, with strong performance all around. The Quick steroid on Shukuchi both serves as Okita’s main NP damage buff and allows for absolutely brutal Quick Brave Chains if the cards line up, even letting her completely refill her NP gauge if she crits on her fantastic Quick cards. Weak Constitution is a vanilla 1-turn Critical Star Absorption buff, but it stabilizes her ability to consistently crit without a large surplus of stars. Okita’s Mind’s Eye (False) is both her emergency defensive measure as a 1-turn Evasion, and her Critical Damage steroid. The linchpin of Okita’s kit is Mumyou Sandanzuki, a powerful ST NP that both pierces Defense Up buffs and drops a hefty 3-turn Defense Down after hitting.

However, Okita is not without her flaws. Though her NP generation allows her to potentially spam Mumyou Sandanzuki, her Quick steroid only lasts for one turn, leading to significant damage falloff on subsequent turns. In addition, her sustained critical damage steroid is also tied to her dodge, leaving her often stuck with choosing whether to save Mind’s Eye for safety or use it for damage. Nevertheless, her consistency and self-sufficiency mean that Okita can perform well despite these shortcomings.

Overall, Okita Souji is a very strong Quick ST Saber, and generally does well no matter the environment due to her ability to deal damage, make stars, and gain NP charge on her own.

Between Okita’s stellar ATK stat, the naturally slightly higher damage modifier on Quick NPs, and the steroid on Shukuchi, Mumyou Sandanzuki hits like a truck. A truck that can only be stopped if the target uses Evasion or Invincibility skills. The post-NP Defense Down afterwards is a nice bonus as well.

Okita’s strong Quick cards are the key to her offensive performance, allowing her to build up NP gauge, produce Critical Stars, self-buff with Quick and Critical Damage buffs, and go to town. The fact that she can do all of this without any external support makes her very flexible, able to pivot into many different team setups. Even defensively, Okita brings her own on-demand dodge to the table, lessening her need for urgent defensive support from allies.

What good is a strong NP if you can never use it? Luckily, Okita doesn’t have this problem; rather, she has some of the best active NP generation of any Saber. Thanks to her deck and hit count spread, her Arts card is above average in terms of NP gen, but her Quicks are ludicrous due to having 5 hits each. For the same reason, Okita can generate large sums of stars off any Brave Chain involving her Quick cards, let alone an NP Quick Brave Chain.

Though Shukuchi is powerful for burst turns and enabling Okita’s NP to hit very hard, it only lasts a single turn. Okita’s other sustained damage steroid is Critical-based, meaning it won’t benefit her NP damage at all. Even on that front, since the star absorption on Weak Constitution only lasts one turn, she may not be able to take full advantage of her 3-turn Critical Damage buff. The strong Defense Down debuff on her NP does go some way toward mitigating the potential damage fall-off after NP turns, however.

Trade-off Between Survivability and Damage

Okita packs both an on-demand dodge and a self-buff for Critical Damage. However, the fact that they’re both on the same skill means that often Okita will have to save Mind’s Eye for the dodge, limiting her ability to make full use of the damage steroid. This is especially true against tough bosses, which is where she’s most likely needed in the first place.

All of Okita’s skills provide some form of offensive benefit, fitting her aggressive playstyle. Due to being her only NP steroid and scaling well, Shukuchi is the standout choice for early leveling. Masters can then decide between Weak Constitution and Mind’s Eye (False) depending on their team composition. If Okita can be fed stars regularly, the lowered cooldown on the dodge and increased Critical Damage from Mind’s Eye will be more valuable. If stars are in short supply, Weak Constitution will let Okita carefully gather them up as often as possible. However, the two skills synergize well together, so leveling them concurrently is ideal with Mind's Eye being generally more potent.

Okita’s kit revolves around her bonkers Quick cards, so naturally looking to boost them is one approach. Otherwise options such as boosting her NP’s already-high damage, her strong critical game, or her ability to access said NP, are also common. Therefore, Okita can benefit strongly from Quick Performance Up, NP Damage, Critical Damage, NP Gain, or Starting NP Gauge CEs.