Community Posts with Keyword Quetzalcoatl All 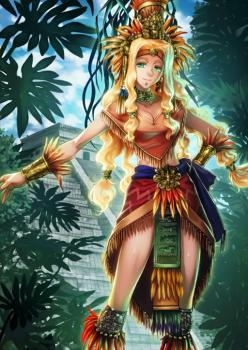 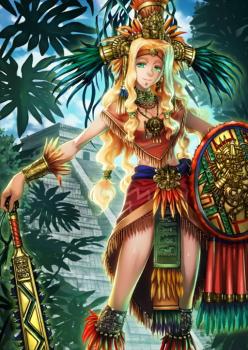 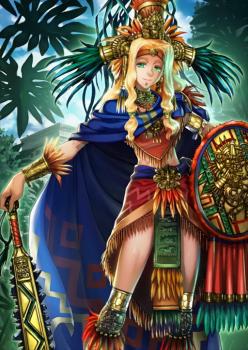 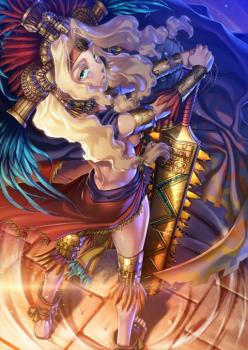 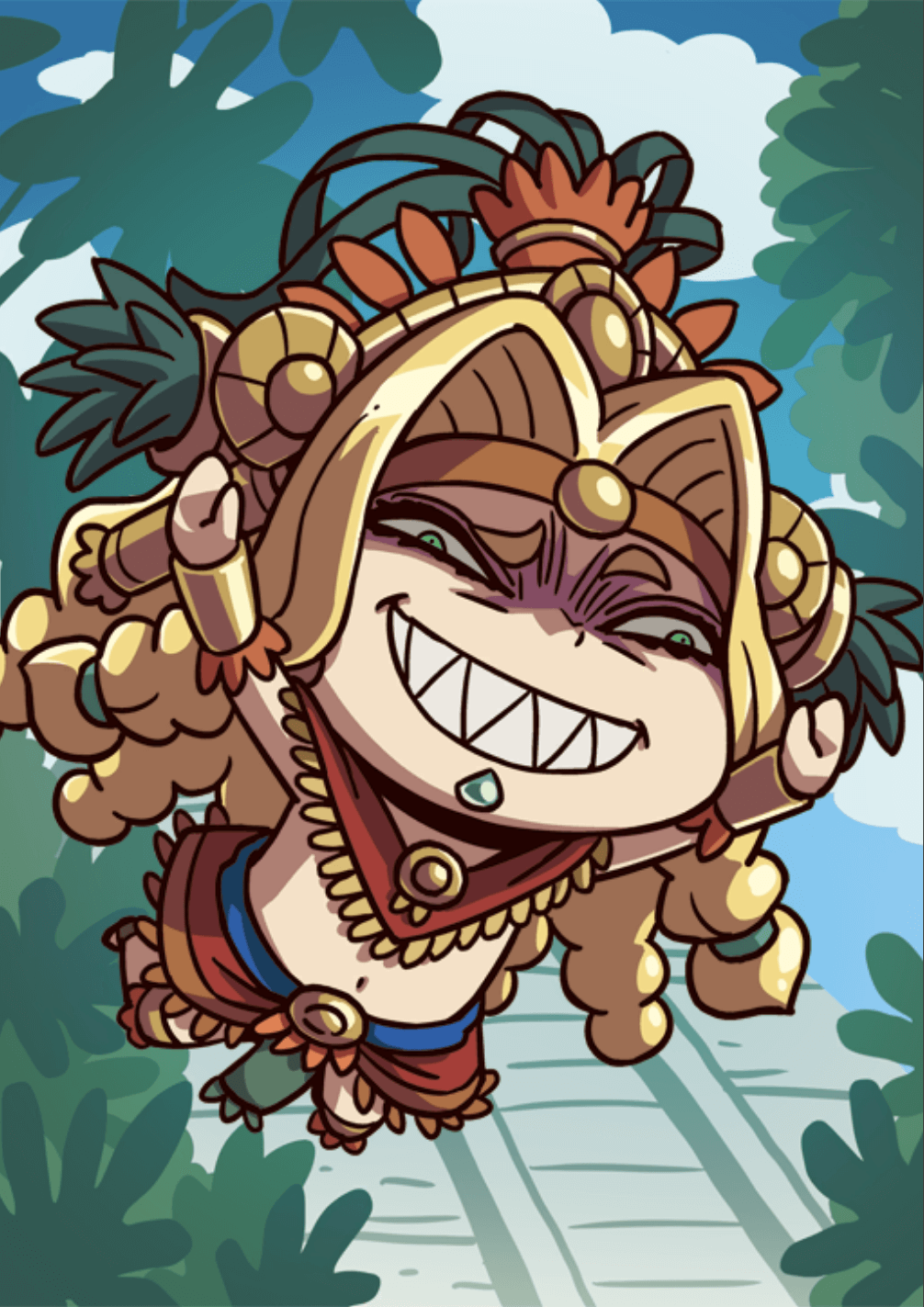 Wisdom of the Benevolent God A+

O Flame, Burn the Gods Themselves

When equipped on Quetzalcoatl,
Increases party's Arts and Buster Card effectiveness by 10% while she is on the field.

To the surprise of absolutely no one, the Feathered Serpent God of Mesoamerica joins the fray in the guise of a beautiful and reliable older sister with an odd obsession for lucha libre. With a highly offensive-oriented skill set accompanied by amazing base stats across the board, Quetzalcoatl is a heavy-hitting Rider with one of the best one-turn burst setups in the game.

Quetzalcoatl offers a diverse skill set, and thankfully she is quite adept at most of its elements. While she does not bring the same level of utility and unique support potential as her direct competitor Ozymandias, Quetzalcoatl is still a fantastic team player. After all, she offers both a powerful teamwide attack buff with high uptime in Charisma, and a targetable Buster / Guts buff with Wisdom of the Benevolent God. However, her main niche is being a bursty Buster Critical Rider, mainly thanks to her third skill Lucha Libre. Granting her a sizable 1 turn Critical Damage buff, Critical Star Absorption increase, and 30% NP charge at max level, this skill is essentially what makes Quetzalcoatl the destruction machine that she is. While the effects only last for one turn, the immense power it brings makes her Noble Phantasm Buster Brave Chain absurdly effective at taking out the boss in one fell swoop, especially with additional support from allies.

While this jolly goddess does not possess any hugely detrimental flaws, there are certain areas that are slightly underwhelming compared to others. Quetzalcoatl’s only survival skill is tied to her Buster buff, which means she will often have to waste either the Guts or the Buster buff when using it. Regardless, Quetzalcoatl as a whole is not particularly durable even with this skill active. Furthermore, Her Star Generation is not particularly noteworthy despite having decent hit counts and Riding EX, as her card set only contains a single Quick card and no other ways to boost her star generation.

Overall, Quetzalcoatl is a superb Rider, whose few flaws hardly diminish her incredible damage output and outstanding statline. Utilized well, this lovely and reliable older sister will bring any Caster to her knee with the almighty lucha libre!

Fantastic Base Stats and Strong Passives

Sporting the highest Attack amongst all Riders and very respectable HP, Quetzalcoatl is a powerhouse even in terms of pure stats. Her passives give her an even bigger boost, with Riding EX turning her lone Quick card into a pseudo Arts card in terms of damage and Divine Goddess Core granting another flat 300 damage bonus to all of her cards.

Her NP generation is not bad either, with a strong base NP gain per hit and a good hit count distribution on her Arts, Quick and Extra cards. Add in the fact that she has naturally higher Star Weight as a Rider Servant and the battery on her third skill, and Quetzalcoatl’s NP generation will start to outpace many Servants in the game.

Last but not least, Quetzalcoatl has an often underrated strength in her debuff resistance. With Divine Goddess Core and Magic Resistance each granting her a humongous 30% & 20% debuff resistance respectively, she will shrug off a lot of debuffs coming her way. While this is not particularly central to her identity as a Servant, it will quietly benefit her in many circumstances.

Similar to Gilgamesh, Quetzalcoatl has one of the highest value Charisma in the game. A 21% teamwide Attack buff with only two turns of downtime at max level is a simple but strong bonus to any team she is in. Furthermore, Quetzalcoatl has the ability to grant an ally, or herself, a sizable 30% Buster Performance buff and Guts status for three turns with her second skill. It has a somewhat high cooldown, but the value is nothing to scoff at. Last but not least, her Noble Phantasm has the small benefit of inflicting NP seal, which can buy the team an extra turn of survival in the right circumstances.

Thanks to all her steroids and her absurd stat line, Quetzalcoatl hits like a truck in any team. However, Quetzalcoatl truly shines when she is the focal point of a Buster Crit team, which takes advantage of her third skill to its utmost potential. When properly buffed by Servants like Zhuge Liang, Andersen, Merlin or Julius Caesar and supplied with Critical Stars, Quetzalcoatl can deal massive single target damage in one turn with a Buster Brave Chain. The Anniversary Blonde Mystic Code is also a powerful option to set her up for a quick 1 turn kill.

Despite having a targetable Guts, Quetzalcoatl is not a particularly tanky Servant nor perfectly suited for longer fights. The Guts is tied to one of her main steroids and has a high cooldown, which means it has both an opportunity cost and its uptime is not stellar. Outside of this, Quetzalcoatl has no other way to mitigate upcoming damage, unlike her direct competitor Ozymandias. In particularly long fights, she will often need teammates’ protection to stay alive. Her third skill, Lucha Libre, also has relatively poor uptime as it only last for 1 turn and has a 6 turn cooldown at max level, which means her damage output is not as stable as someone like Ozymandias.

While it is not particularly bad, her Star Generation is not on the level of self-sufficiency that Servants like Francis Drake or Sakata Kintoki (Rider) possesses. This is due to her single Quick card combined with middle-of-the-pack hit counts (except on her Extra card), and no other way to generate Critical Stars. It is highly advisable to bring Critical Star support for Quetzalcoatl to fully take advantage of her strong Critical Damage output.

All of Quetzalcoatl’s skills are good enough to warrant spending resources on for higher values and lower cooldowns. However, the order of leveling is dependant on a Master’ preferred play style and the availability of other Rider options, as leveling all three skills of a 5* Servant is particularly expensive. Nonetheless, when properly raised, Quetzalcoatl will nicely return the investment many times over.

Quetzalcoatl’s game plan is quite simple, but very effective. Wait for her Buster cards to show up, buff herself up, press her 3rd skill, and go to town. As a Buster Critical Damage dealer, she loves nothing more than Buster Performance and Critical Damage buffs. Craft Essences that grant a high amount of these, and also provide high Attack, stats are highly desirable on her. Starting NP gauge is also an option, as with her third skill she can gain access to her Noble Phantasm very fast and set up her Buster Brave Chain easier.