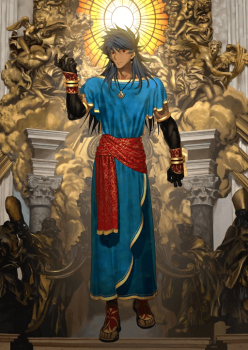 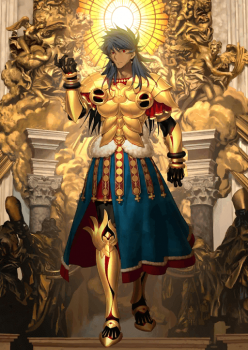 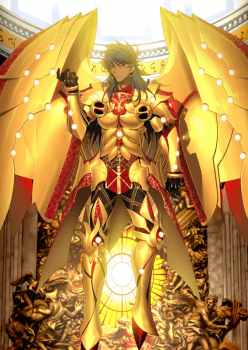 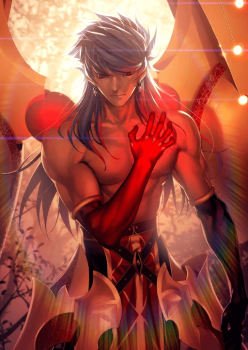 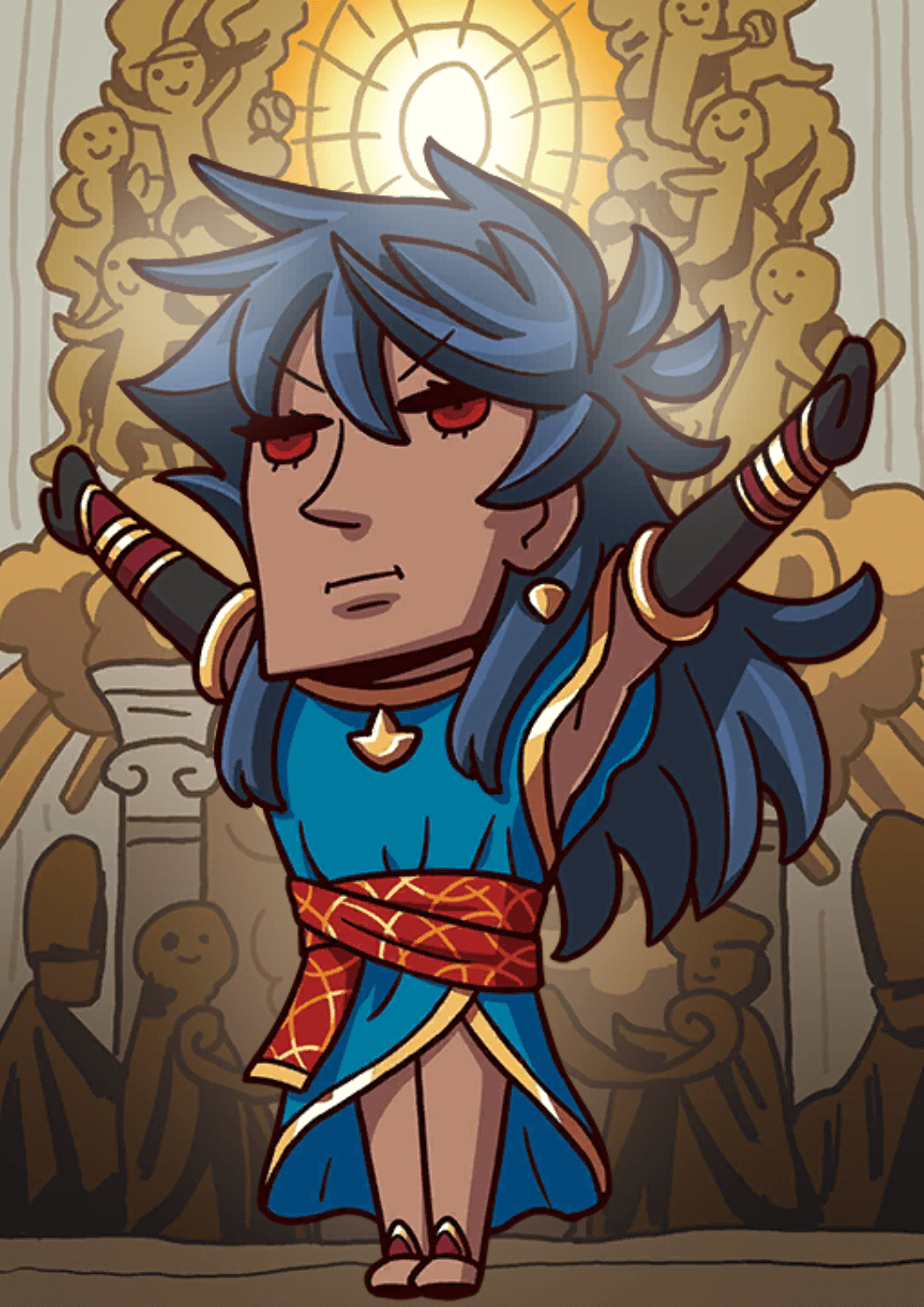 Increase your Critical Strength by 9%.

Core of the King of Gods B+

Apply Damage Plus for yourself (Total Card Damage +225).
Increase your Buster Card effectiveness by 9%.

Our Arms Extend To All, Across The Universe

When equipped on Romulus=Quirinus,
Increase ATK for all allies with [Roman] trait by 20% while he is on the field.

“All of Rome is watching over you.”

The pinnacle of Rome, Romulus=Quirinus, joins the pantheon of AoE SSR Buster Servants. Quirinus is a fairly straightforward offensive unit. While he doesn’t have much in the way of utility or flexibility, he does have plenty of ways to deal damage, and he can help his team deal a little bit more damage too. Quirinus’s core gimmick is turning everything into Rome, and then using that to deal more damage and grant more buffs.

Quirinus’s primary strength is his raw damage potential. With Nine Lives Rome to apply Roman trait to enemies and Per Aspera Ad Astra’s bonus damage against Roman enemies, Quirinus can easily ramp up to substantial damage. Quirinus also has especially good single-target damage output due to his easy critical attack access and his ability to stack multiple Roman debuffs against the target of his crits. Nine Lives Rome and Divinity Transformation help Quirinus access crits, while Throne of Quirinus increases crit damage. Quirinus also has the potential to help allies deal more damage, which can be helpful in certain unusual team setups.

In exchange for these damage-focused strengths, Quirinus has a few key weaknesses. Chief among these is the fact that Quirinus takes time to reach his damage potential, making him a weak choice for short fights. Similarly, while Quirinus has very good single-target damage for an AoE Servant, he has trouble ramping his damage against multiple targets in true AoE fights. Furthermore, Quirinus does not have much utility, making it difficult for him to handle gimmicks typical of hard fights.

Quirinus is a strong AoE Servant, especially for fights where one enemy has much more health than the others. Aside from his damage scaling, though, Quirinus doesn’t have much to set him apart. He’s a good but standard Buster Servant, making him a good pull for newer Masters without many options but fairly unimportant for Masters with more established rosters.

Quirinus’s NP deals more damage for every stack of Quirinus’s Roman trait debuff. Despite lacking an NP Interlude, Quirinus can output massive levels of NP damage if he can apply multiple stacks of Roman on the enemies he’s fighting.

Quirinus has fairly easy crit access and applies the Roman trait when he crits, further increasing subsequent NP damage. As such, Quirinus will often output levels of damage against a single target that are competitive with Servants with single-target NPs. This makes Quirinus a particularly good pick for fights with one powerful enemy and several weaker enemies.

Quirinus can provide 30% in attack buffs and 50% in crit damage buffs to the whole team. This makes him a good choice for teams that need multiple damage-dealers, as Quirinus can increase his allies’ damage while continuing to hit hard himself.

While Quirinus has a high damage ceiling, he will not output that level of damage until he has spent at least a few turns stacking his Roman trait on enemies. This means Quirinus shines in longer fights and is less well-suited to short fights. It also means he is not a particularly good farming Servant, as debuffs do not persist across farming waves.

Quirinus’s ability to scale damage against a single target is an advantage for some fights, but in traditional AoE fights where all enemies have comparable health, it is a disadvantage instead. Quirinus may end up dealing more damage than needed against one target and struggling to kill the other, making him a weaker pick than more standard AoE Servants.

Quirinus’s skills are mostly focused on damage and on meeting basic damage-dealer needs. As such, he lacks tools to deal with enemy buffs and debuffs and is reliant on supports to manage gimmicks in hard fights.

As a Buster Servant, Quirinus is especially reliant on NP charge skills in order to gain access to his NP, so Divinity Transformation should be leveled first. Nine Lives Rome is a damage boost and, more importantly, is the primary way for Quirinus to apply multiple stacks of Roman trait, so it should be leveled second. Throne of Quirinus is also a valuable damage buff, but it is slightly less important than the other two skills and can be saved for last. All three skills contribute to Quirinus’s effectiveness, so all three should ideally be taken to max level.

NP Damage Up Craft Essences are the best way to increase Quirinus’s damage output, as Quirinus has no innate NP damage buffs and he generally wants to be dealing NP damage over the course of multiple turns. Buster Damage Up and Attack Up craft essences are less effective on Quirinus but can be useful for similar reasons. Starting NP Gauge craft essences, meanwhile, can be important for helping Quirinus use his NP quickly and consistently, especially in farming contexts. Critical Star Generation CEs can also be useful for helping Quirinus gain consistent access to critical hits in order to add stacks of his Roman trait.

Rome is, in its essence, "romance"...
As if to symbolize this, after the Age of Gods, this man attained a sense of humanity and the ability to love his fellow humans.

The young Romulus, who would become the great founder of the nation of Rome, was born to the war god Mars and the beautiful princess Silvia. He was raised among wild beasts. Here, his youthful self has been combined with Quirinus, one of the three highest-ranking Roman deities.

This being is worshipped as a god, and his manifestation emphasizes the brutal aspect of the rapid expansion associated with ancient Rome. Just like the Heroic Spirit of the same name who symbolizes rule and prosperity, he epitomizes the possibilities for humanity as it leaves the Age of Gods behind.

Height/Weight: 185cm, 73kg
Origin: Roman Mythology
Region: Europe
Alignment: Chaotic-Balanced
Gender: -
As Romulus was conceptualized as the ultimate being, characteristics typically assigned to living beings or positions on Earth do not apply.

At times they sever the world, at times they clear the way for civilization...all the while they love humans as only another human can. Should this romantic embrace be likened to a spear, it would be most grand and sharp. An ordinary Spirit Origin would not be enough to contain it all, and only when the Grand title is placed upon the Spirit Origin will they be able to manifest in their true form, which is to say, as a Grand Lancer.

So while they manifest as a normal Lancer under Chaldea's summoning system, there is little doubt they will remain a most extraordinary being.

Core of the King of Gods: B+
As the child of Mars, taken along with their being deified as the highest-ranking god within Roman mythology after dying, they possess a Divine Core in their Spirit Origin. Normally it would have been a nonstandard rank, but it has dropped to B+ under Chaldea's summoning system.

Independent Action: B+
Normally, nothing on earth would be able to restraint the highest-ranking god...but Romulus=Quirinus has purposefully lowered their rank.

Throne of Quirinus: EX
Meant for the highest deity of all mythological systems, as well as the deity who governs the entire world of the Mediterranean Sea, this skill has converted Imperial Privilege, and under normal circumstances it should represent various different Authorities. However, this is typically not used as an Authority in this game.

Divinity Transformation: B
The Natural Body skill that has been altered along with the Spirit Origin. A representation that Romulus, though born as human, ascended to become a deity.

Slaying A Hundred Heads, Roman Style.
A combat method devised by the great hero of Greek mythology, Heracles. It sublimated into its new manifestation possibly resulting from information passed down from the war god Mars (Ares), who watched over all of Heracles's fierce battles...or perhaps from the lore about Heracles being the father of Romulus. The school of Heracles, Rome branch, per se. A flurry of fists, similar to a spear of light, slaughters even monsters that are already devoid of life, and flings them skyward them to make the starry heavens sparkle.

A continuously active Noble Phantasm.
In this game, it is expressed as a skill.
Although they will unleash intense lightning strikes at the time of their True Name revelation, it is not typically used in this game.

Our Arms Cut Through It All, Taking Us to the Stars.
A great Noble Phantasm that is similar in nature to "Magna Voluisse Magnum" of the Servant sharing the same name. The concept of developing and expanding civilization has sublimed into a Noble Phantasm.

The arms of romance that sever the world to clear the way for civilization that will eventually reach into the sky itself are like spears of light. And while it's a manifested depiction of the arrogance of those who control the universe, it's also an embodiment of the people's determination to carry on despite an uncertain future.
If this is used as an attack, it will wreak most devastating destruction.
Should this be used for protection or to create something new, it will surely prove even more dazzling...but that is not how it is typically employed in this game.

While it's downsized, there is a possibility of this being one of the aspects of a nation-building Authority, or even an application for it...at least that's what Holmes and Da Vinci infer...

The nation-building hero Romulus who was previously bound by human limitations has now revealed their aspect as a god. Normally there is no possibility for a Divine Spirit to be summoned with a Grand Spirit Origin. However, the fact that they were deeply involved with human history and, in a most unusual exception, were elevated into a supreme god despite being human, were the miracles what enabled them to be summoned as a Grand Lancer in the Fifth Lostbelt.

In the Fifth Lostbelt, many of humanity's Heroic Spirits attempted to go up against Zeus, the Lostbelt King, but they were wiped out entirely. Entrusting their final hope to Chaldea, knowing that they would soon arrive, the Heroic Spirits gathered the last of their strength and left a grand plan behind to survive them.

And so, "Operation God Destroyer" was conceived, leading to the summoning of Romulus=Quirinus, a Heroic Spirit/Divine Spirit who was on the side of humanity, and possessed a human aspect while simultaneously being the supreme god of myth, as well as power equivalent to the thunderbolt wielded by Zeus, the Greek king of gods.

With the arrival of Chaldea, Operation God Destroyer came to fruition. When Romulus=Quirinus manifested in the Lostbelt, they fought alongside Chaldea to successfully defeat the swarm of Olympus's divine mechs.

When the mechanical gods were destroyed, Romulus=Quirinus disappeared along with them, and it was thought that they would never manifest ever again... But the bonds they formed with Master, combined with the Spirit Origin registering on to the Trismegistus in Novum Chaldea, enabled their Spirit Origin to be summonable without the Grand title. With their summoning, they can once again wield their arms like shining spears in defense of humanity.