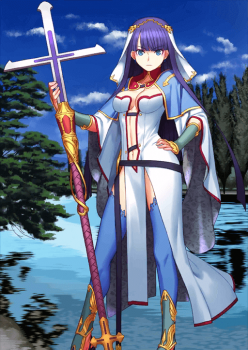 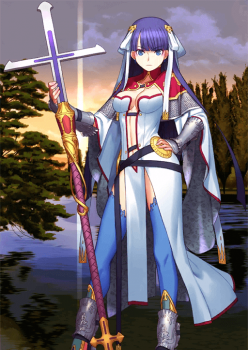 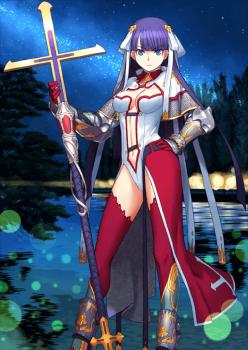 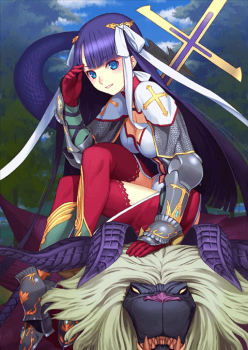 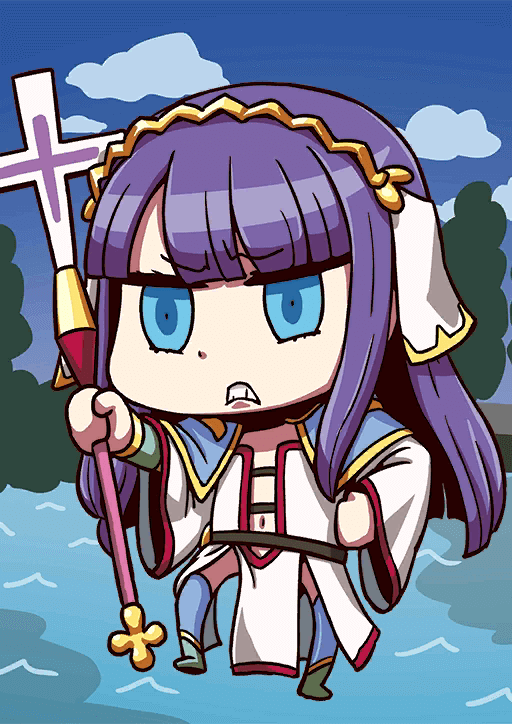 Protection of the Faith A

Oath of the Holy Maiden C

Unlocks after 2nd Rank Up Quest

Increase your Quick Card effectiveness by 11.5%.

Upgrade via Rank Up Quest 3

The Staff He Gave me

When equipped on Saint Martha,
All allies get +30% health received from healing while she's on the field.

The waterside saint who tamed a dragon with her fists of compassion, Saint Martha is a supportive Rider with the ability to both remove beneficial buffs from enemies, and cleanse detrimental debuffs from allies. With both a Buster AoE NP and an Arts-deck, Martha can fit in a variety of teams based on whether her specific capabilities are required.

Martha's utility is her primary selling point, as her Miracle is one of the few skills with an on-demand cleanse that removes debuffs on the entire party at once - a feat typically reserved for support NPs. In addition, her Oath of the Holy Maiden provides more utility by stripping an enemy of their buffs while inflicting a hefty up to 30% Defense Down. The 3-turn AoE scaling Defense Down on her NP Tarasque provides further support (and allows her NP to be an excellent start to an NP Chain), while she keeps her team topped off with AoE healing. Lastly, her combination of high Rider-level Star Weight, triple Arts card deck, and extremely high base NP Generation rate per hit will ensure she can charge her NP very quickly.

However, Saint Martha is pretty weak in terms of offense. Her low base Attack and single Buster card reduce her damage output turn to turn, while her NP pre-Rank Up only profits from the single Defense Down from Oath of the Holy Maiden. The Rank Up for her NP does improve her damage output, but it still lags behind those of her peers even afterwards. Martha's overall support is also less powerful for basic quests, where her debuff cleansing and buff-stripping utility are often unnecessary. Lastly, her support role is heavily encumbered by her high Rider-class Star Weight, as Martha will soak up the critical stars the main damage-dealer would typically prefer to use.

At first glance, Saint Martha is a sturdy AoE Arts-oriented Rider with weak offensive capabilities. But beneath the surface lies a situationally incredibly powerful Support whose on-demand utility makes her a powerful Servant for challenging fights where buff-stripping and debuff cleansing are key.

Team debuff cleanses are rare, and team debuff cleanses on a skill are even more so. Martha grants access to one, while also carrying valuable buff-stripping utility. The on-demand nature of skills compared to NPs makes them incredibly convenient and skills can typically be activated without prior preparation. As the hardest content in the game typically involves some of the most devastating debuffs and enemy buffs, cleansing or removing them can trivialize the encounter. This makes Martha an ideal candidate for use with the Chaldea Combat Uniform as Masters can swap her in (or out) based on whether she is needed.

With three Arts cards and ‘Caster’-style hit counts, Martha's NP gain is excellent, even allowing her to NP spam in the right conditions. Given her high base NP Generation, Martha greatly profits from card chains that start with an Arts card.

Martha's NP inflicts a 20% Defense Down debuff on all enemies for 3 turns, while her Oath of the Holy Maiden inflicts an additional 30% Defense Down debuff for 3 turns to a single target. While Martha herself will not damage enemies too massively, she can still set up others to do so for her, especially given she can use her NP  quite often and her debuffs last for 3 turns. Furthermore, the healing from Miracle often helps to stabilize a team's HP after cleansing them of their debuffs.

Her low attack, single Buster card and single offensive steroid before her NP launches means even with her NP up she can’t hit particularly hard. Post 3rd Rank Up her offensive presence is improved, especially if she is to be used for farming with her NP, but she still finds few opportunities to deal decent damage. The mismatch between her Buster NP and Arts deck also reduces her damage output and support indirectly, as any Arts-led chain grants tremendous NP Generation from the Arts card first bonus.

While Martha packs a huge variety of support tools, her usage for normal quests can be rather limited. Defense Downs do not carry over between enemy waves, her cleansing and buff removal utility are often unnecessary for basic quests, and her own damage isn't really high enough to farm some waves of enemies well enough compared to her peers even after she gain her NP Upgrade. As such, Martha is mainly a powerful specialist for challenging encounters where her utility shines.

Rider-class Servants have naturally high star weight which results in them attracting the majority of critical stars whether they want to or not. As a support Servant with limited offensive potential, Martha often hinders allies that rely on their critical capabilities who can use those critical stars to better effect.

The main utility in Martha's skills is fully accessible even at skill level 1. Odds are, especially if she is to be used with Order Change, that she won't even need to use her skills twice. As such, Masters can wait to level her skills until later if resources are tight. However her support capability does noticeably improve with levels, especially if she's fielded for long stretches of time.

Saint Martha can use a variety of CEs depending on her role. Masters who wish to make use of her AoE NP damage will want to look for CEs that grant NP Damage Up or NP Gain as they work well with Martha's mismatched NP and card deck. Of course, Starting NP Gauge is ideal if Masters want to quickly chuck out her NP for farming. Lastly, Martha can run the standard support CEs with Passive Stars per turn or Passive NP Gain, but she is also highly effective with CEs that grant effects on Entry.

A holy maiden, a saint, who calmed the evil dragon, Tarasque.
Led by the words of the Messiah, along with her brother and sister, she became a person of unshakable faith.
She was perfect, abundant in charm and beauty.
A holy maiden who was able to charm such terrifying beast.

After the Messiah was executed, she did not waver in faith.
When she was exiled by the governor-general of Rome, by the grace of God, she drifted upon the shores of southern France and survived.
She confronted the dragon that was terrorizing the people of the town of Nerluc, near the bank of the Rhone River.

Miracle: D
A unique skill that can sometimes make the impossible become possible.
Although this skill shares some similarities with the skill "Pioneer of the Stars," it is fundamentally different.
The two skills also apply to two different groups of targets.

A perfect saint inside and out. She is like a little sister, though most of the time she acts like the complete opposite.
Kind and just, she is someone who glimmers with radiance of the light.
However... to someone she grew especially close to, she might show the side of her that's "Not Saint Martha."

When Martha is "not a saint," her choice of words and expressions become more fierce.
She's more energetic and active. This is her before she was a saint, when she was just a town girl living with her brother and sister.
Though she's still the same person in her expressions and choice of words.
She's still a saint no matter what, the only difference is she is more filtered one way than the other.

For Saint Martha, there is nothing to wish for with a Grail that's not of the Messiah. As always, she remains a saint even after being materialized as a Servant.
She will gladly help her Master, as long as they continue to walk the path of righteousness.