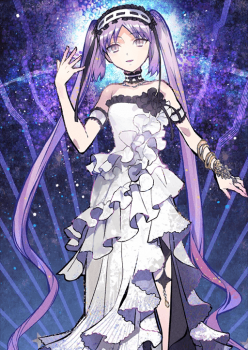 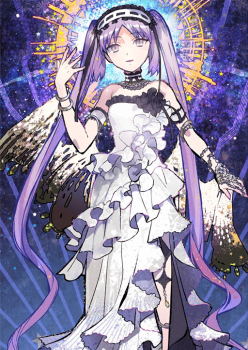 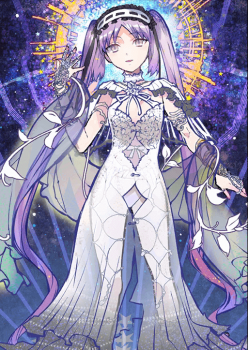 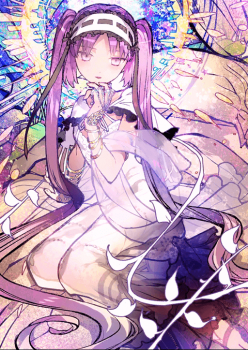 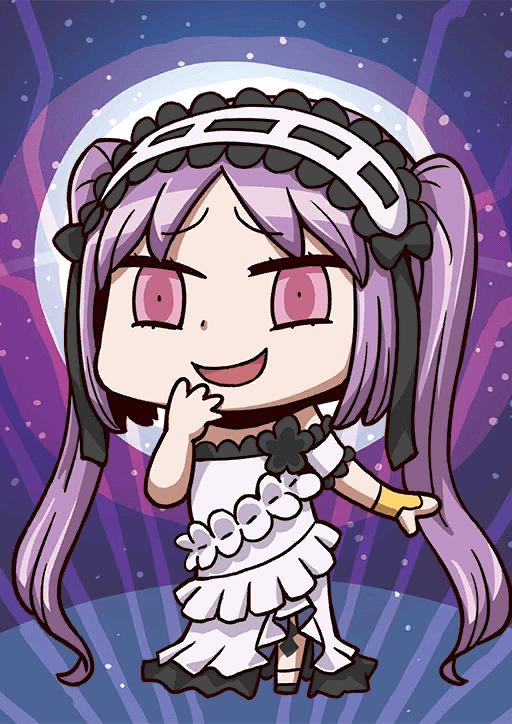 Whim of the Goddess A (Stheno)

Smile of the Stheno B

Chance to inflict Charm (Male only) for a single enemy (1 turn).

Smile of the Stheno

Smile of the Stheno (Upgrade 1) B+

Chance to inflict Charm (Male only) for a single enemy (1 turn).

Smile of the Stheno (Upgrade 1)

Radiance of the Goddess

When equipped to Stheno only,
Increase Quick Card effectiveness of all allies by 15% while on the field.

The eldest of the three gorgon sisters, Stheno is an anti-Male specialist of the Assassin class. She is one of the most extreme Servants when it comes to specialized kits, touting a Buster NP that does no damage and cannot be Buster-Brave chained. Instead, her NP can inflict Instant Death (on Males only), Charm (on Males only), and a defense down debuff. For non-male enemies, her NP essentially becomes only a defense down debuff, which other Servants can accomplish with additional effects. Her second skill’s charm is also Male only. In essence, bringing Stheno to a quest without male enemies renders much of her kit ineffective.

However, against male enemies, she can render them helpless for turns on end. In addition to her charms, her first skill enables her to drain the opponent’s NP charge and fill her own NP gauge. She also has one of the highest NP gains in the entire Servant pool, enabling her to fire off her NP in rapid succession. After Stheno’s Rank Up, she receives a powerful Charisma skill that gives additional bonus attack to Servants with the Divine attribute (quite common among the cast), increasing her supportive effectiveness in parties tremendously. With it, she becomes a good choice as a damage support for divine Servants once unlocked.

Overall, Stheno is a unique and very niche anti-Male Servant with great stats whose usage is limited, but is slightly broadened with her Rank Up, adding a role for her as a support for Divine attribute comrades.

Her second skill along with her NP are capable of locking male enemies in a charm state for a long time.

She has one of the best NP gains in the entire game, allowing her to spam her NP near-constantly if the card draws line up properly.

With her Rank Up quest, she will have one of the highest ATK buffs available for Servants that have the Divine attribute (total +40% ATK for Divine allies including herself, +20% for other allies), making her a great damage support to use in the party.

The Assassin-class 0.9x damage multiplier, an overwhelming sum of Quick cards, and a non-damaging NP makes her offensive power rather pitiful.

When pitted against non-Males, one of her skills is essentially useless while her NP turns into a simple defense down. Additionally, her younger sister Euryale is a direct competitor that outperforms her in many of these situations. Rider-class Male enemies where she can exercise class advantage in conjunction with her anti-Male role are few and far between.

Even when fighting Males, Instant Death is an incredibly inconsistent effect which essentially never works versus the difficult enemies which it would be useful for. Also, her second skill’s Charm effect may miss due to enemy Magic Resistance, even if maxed.

Vampirism C: Levels in Vampirism increase the amount of NP gauge granted by this skill, in addition to increasing the likelihood of NP charge drain success. This skill is useful in enabling her to use her NP more quickly, while boosting her consistency in stalling.

Siren Song A: Points in this skill are useful for increasing the consistency of her Charm (up to 100%, although this can be reduced by enemy Magic Resistance). Although this skill is more niche, and can be left for last, increasing the likelihood of Charm success is still useful to her performance as an anti-Male Servant.

Whim of the Goddess A (Stheno): Unlocked after her Rank Up quest, this skill grants an attack buff to the whole part equivalent to Charisma A (20% at max), with an additional equal buff to Divine attribute allies (20% at max, totaling at 40%). This skill is the most flexible among her skillset, and is worth leveling first.

OVERALL: Stheno’s main goal is the keep the enemy charm-locked, and her (Quick) command cards are her main source of damage. Quick Up / NP gain / C Star Drop Rate Up / C Star Regen per turn / Debuff Success Up craft essences work well with her.

The eldest of the three Gorgon sisters in Greek mythology.
The epitome of what men long for, the perfect "idol."
A goddess that was born as the "perfect woman."
A beautiful woman as if elegance and refinement were put into human form.
Euryale and Medusa are her younger sisters.

Any man would praise her elegance upon looking at her.
But if you look deeper, she has an extremely stubborn personality.
To those she doesn't care about, she is extremely cold.
So much so that even the watchdog of the underworld (Tartaros) would shiver.

About my younger sister (Medusa), I do end up bullying her with my other self (Euryale) at every opportunity, but in the end I do love her.
...I love her from the bottom of my heart. Even after death.

Core of the Goddess: EX
A unique skill that demonstrates she was the perfect goddess from birth. A combination skill that includes Divinity.
Repels all interference to the psyche, and stops any physical growth.
Also, no matter ho many calories she ingests, her body will never change.

She has no wish to be granted by the Holy Grail.
If forced to come up with something, it would be for "the three sisters to live together forever," but she knows that is impossible.
She only thinks about one thing regarding her seemingly impossible summon
...that is, whether or not she can enjoy herself.