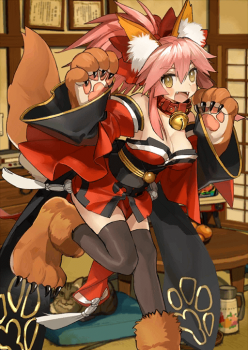 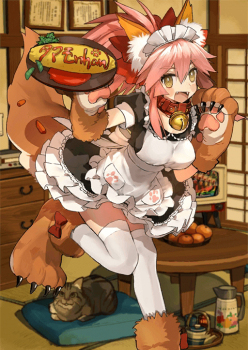 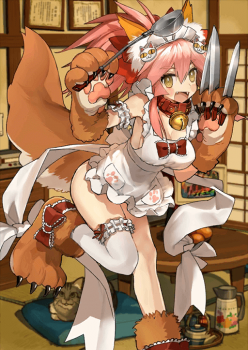 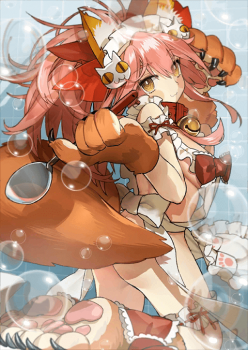 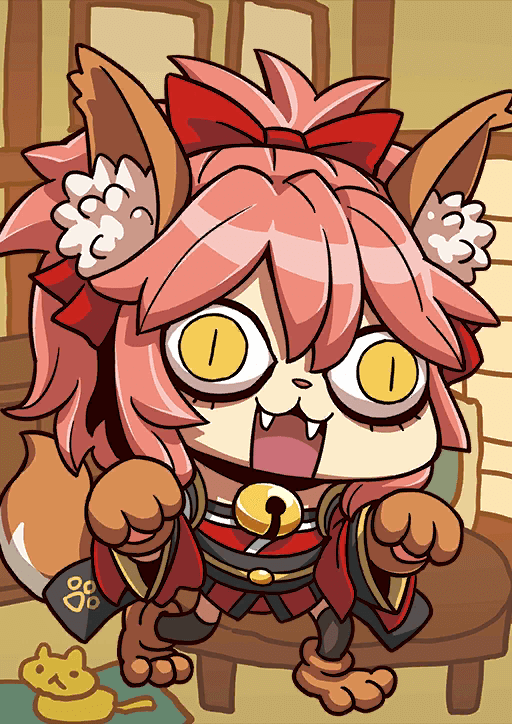 Chance to decrease a single enemy's NP Gauge by 1.

High chance to decrease one enemy's Charge.
Apply Invincible for yourself (1 time, 5 turns).

Replaces Morph B. Upgrades after Rank Up 1

Napping in the Dazzling Sunshine and Feasting D

Deal heavy damage to all enemies.
Inflict Stun to yourself (2 turns).

Restore your HP per turn (3 turns).

Napping in the Dazzling Sunshine and Feasting

Napping in the Dazzling Sunshine and Feasting (Upgrade 1) D+

Deal heavy damage to all enemies.
Inflict Stun to yourself (2 turns).

Napping in the Dazzling Sunshine and Feasting (Upgrade 1)

When equipped on Tamamo Cat,
Increase MAX HP of all allies by 2000 while she's on the field.

“My ruffling fur and boiling instincts! I'll follow you until the end Master, woof!”

Chaldea's cute combative canid cat cook cheerily cuts through her enemies as a Buster Berserker with a Quick AoE NP. A member of the infamous Tamamo-Nine, a “cat” who shouts “woof”, her skill set can be described as slightly capricious especially after her 2 Rank Ups.

Tamamo Cat’s main dish is her upgraded Berserker AoE NP, which when combined with her class’s near-universal increased damage and her one attack steroid, make for a convenient farming Servant. The NP has a decent 5 hits to boot, often generating a good sum of Critical Stars against multiple enemies. Additionally, the quirks in her kit make her deceptively robust. Cat’s Morph initially increases her defense by a good amount, but once it gets upgraded, it also gives her increased maximum HP and debuff immunity. Likewise, Curse, after Rank Up, gives her one free-hit of Invincibility while at the same time potentially delaying an enemy’s NP by reducing their gauge by one. Finally, she also has a massive healing-per-turn tied to her NP, further increasing her survivability.

However, befitting her lore, our fox-cat-dog does have some identity issues with regards to her kit. Firstly, her overall damage is not as high as she would like it to be. While Monstrous Strength and its attack up does partially make up for this, its unusual uptime of 2 turns lowers her overall damage potential. Next, her NP, true to what it says, makes Tama-Cat take a nap after usage, i.e. she’ll be stunned for the rest of the turn as well as the next turn. While this isn’t really a problem for daily missions, Masters may need to work around this demerit in Story or Challenge Quests through either debuff removal or debuff immunity (like with her upgraded Morph).

Overall, Tamamo Cat is a solid farming Servant who is surprisingly tanky, enough to warrant possible inclusion in teams outside of farming given enough preparation to play around her NP’s stun demerit. Not bad for a starter Servant, woof!

As an AoE Quick Berserker, Tamamo Cat is often used as dedicated farming Servant for most farming nodes due to her increased damage to nearly every class. This makes her a convenient option to raise, especially for new Masters who got her as their starter Servant. Her NP Damage is also quite decent given her combination of 30% Attack Up, the slightly higher modifier on Quick NPs, and her NP Upgrade.

Good Durability for a Berserker

Tama-Cat has both a defense up and, upon completion of her Rank Up quest, a Max HP buff to supplement her high base HP. Furthermore, her NP also regenerates a significant amount of her HP (9000 over 3 turns at base Overcharge), while after her second Rank Up, she gains a one-hit Invulnerability from her upgraded Curse. All of these effects combined make her quite a bit more durable than her Berserker peers.

With a five-hit Quick NP, Tamamo Cat can generate a good sum of Critical Stars against waves of 3 enemies. Masters can amplify this aspect via Quick buffs, Star Generation buffs and triggering Overkill early. This makes Tamamo Cat a good option to destroy wave 2 during farming sessions in order to set the stage for additional critical damage possibilities in wave 3, especially once she can prevent her self-stun.

The self-stun demerit on Tamamo Cat’s NP, prevents her from attacking or contributing to chains on both the current and the next turn, hurting her usability. Even a Brave chain, done with her NP picked last, will still forfeit the Extra Attack. Note that after its Rank Up, Morph will provide debuff immunity, which remedies this self-stun issue once every 5 turns.

Given Cat’s rather low base attack stat, low Madness Enhancement and that her Attack boost only lasts for two turns, Cat basic attacks tend to be weaker than many of her peers. Additionally, while she can perform a Buster Brave chain through her Command Cards, her NP isn’t Buster. Thus,even if she bypasses her NP’s stun demerit, she still can’t take advantage of a Buster Brave Chain’s bonus damage. Her mixed deck also makes her more difficult to support optimally as Quick buffs for her NP don’t mesh well with her Buster deck.

For endgame masters who have their efficient farming setup sorted, Tamamo Cat's soft survivability niche doesn't contribute much towards farming more efficiently nor is it particularly useful in practice during Challenge Quests.Until her second Rank Up grants her a 1-hit Invincibility, her lack of hard survivability also makes her survival niche hard to make full given some enemies can deal more damage to her than she can regenerate.

Tamamo Cat first and foremost needs to fulfill her niche as a farming Servant. Increasing her damage allows her to more easily one-shot stronger waves with her NP, while also triggering Overkill faster for more Critical Stars. If she is to be used for her general performance, her next priority should be improving her sustain and her survivability, which given her kit, is plentiful.

Given Tamamo Cat’s farming niche, she tends to prefer Starting NP Gauge CEs for convenience. With dedicated Support Servants who can charge her NP or as effects on a hybrid Starting NP Gauge CE, both NP Damage Up and Quick Performance Up scale well with her Monstrous Attack. Buster Effectiveness can also be considered as a last resort to use with her three Buster cards, but Tamamo Cat isn’t well suited for the Buster Berserker role. Lastly, Craft Essences with Debuff Immunity can be used to bypass her self-stun demerit especially before her Rank Up.

Kaleidoscope / Imaginary Element / Dragon's Meridian: In general, Tamamo Cat needs to be equipped with full Starting NP Gauge to farm well. Starting NP Gauge CEs will allow for a faster NP to be set upon enemy waves without having to waste time charging it.

Golden Sumo: This CE raises Tama-Cat's attack by a generous 15% upon MLB, and improves her damage consistency both on her NP and her normal cards.

Holy Night Supper / Knight of Marines: These CEs strike a balance between allowing Tama-Cat to fire her NP faster, while also dealing more damage with it than with Golden Sumo.

One Summer: An alternative hybrid option, but one that is vastly weaker than the rest by virtue of its lack of Attack stats.

Black Grail: Given Tamamo Cat’s innate tankiness and healing, she can equip this CE and get a massive damage boost for her NP while still being able to sustain herself for multiple turns.

Vessel of the Saint: This CE will prevent Cat from getting self-stunned, but do note that it will only proc thrice, and enemy debuffs may also lower the number of procs.

Limited/Zero Over / Verdant Sound of Destruction: These options increase Tama-Cat’s normal Buster attack cards. As she can also perform a Buster Brave Chain, there’s some potential in upping that damage.

A very common mistake often done by new Masters is to attempt to perform a Brave chain while Tamamo Cat’s NP is placed at the start. Owing to her NP’s stun demerit, this will result in the rest of the command cards failing (barring debuff immunity/debuff removal). If a Brave Chain with Cat’s NP is still the best option, place her NP at the end of the chain so her first 2 attacks still launch (the Extra Attack will still not proc).

In addition, for pure damage with Debuff Immunity, it's generally best to start with a Buster card rather than her NP for the Buster Starting Card bonus. This will result in a stronger damage chain.

Rollings on anniversary banners for 4*s, bait?
Hi guys, looking at the current anniversary banner and it has the second lot of…
Ozy as teamplayer
Ozymandias. Finally got him after trying on every rate up since I started almost 2…
Jeanne Archer vs Dantes
Hello everybody, i manage to get Skadi and i have Parvati NP2 and Atalante NP2 to loop…
So how many of you still having problems with the CC
So how many of you still having problems deciding who you should give the command…
So I just started playing and got Skadi for my first 10-roll. Now what?
Just like what the title said. Now I’m not sure what to do, do I save up for future…
Read More