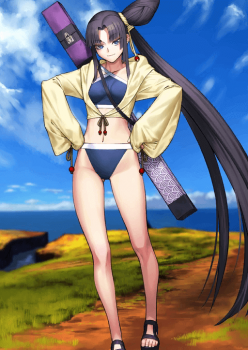 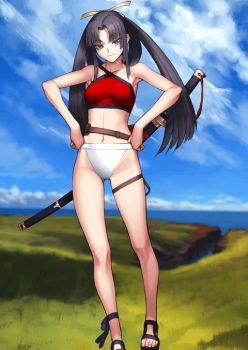 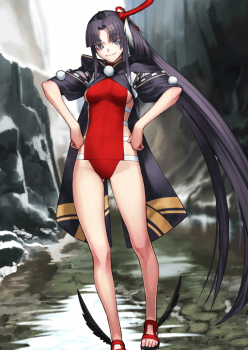 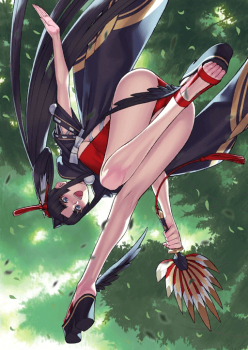 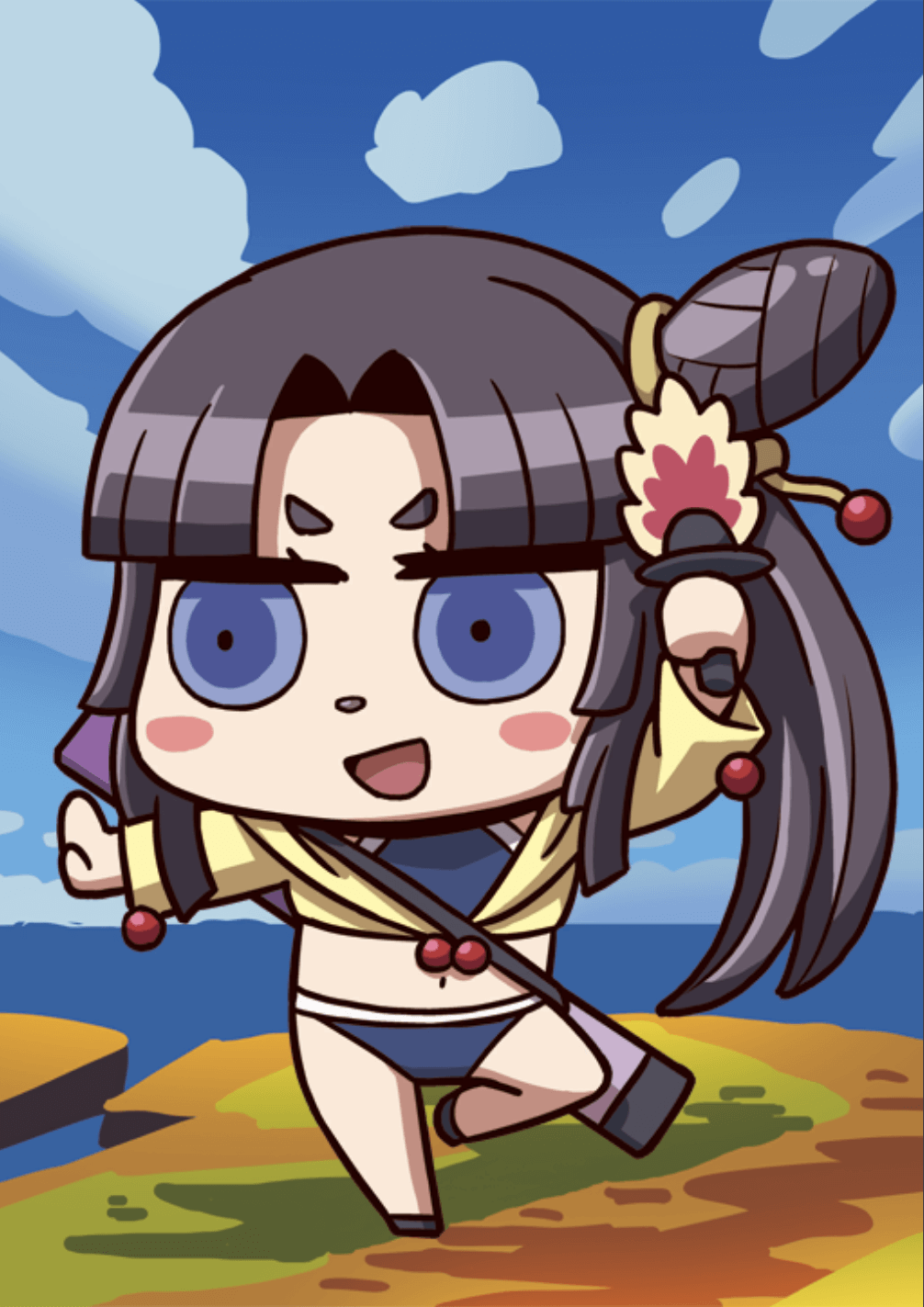 Heaven-Sent Child of Kurama A+

Deal damage to all enemies.
Removes offensive buffs for all enemies.
(Offensive Buffs include Dmg Up, Special Dmg Up, Crit Dmg Up, NP Dmg Up, Buster/Arts/Quick Up, Sure Hit, Ignore Invincible, and Ignore Defense)

Gale of The Tengu's Feather Fan

Deal damage to all enemies.
Deal 150% supereffective bonus damage against [Lawful] alignment enemies.
Removes offensive buffs for all enemies.
(Offensive Buffs include Dmg Up, Special Dmg Up, Crit Dmg Up, NP Dmg Up, Buster/Arts/Quick Up, Sure Hit, Ignore Invincible, and Ignore Defense)

Gale of The Tengu's Feather Fan

When equipped on Ushiwakamaru (Assassin),
Increase all allies' Quick Card effectiveness by 10% and Critical Damage by 15% when she is on the field.

“Since I can’t lose to the others, I’ll change my clothes.”

Once upon a time, Ushiwakamaru trained in stealth to steal her Master’s sword. So when she decides to play (or train, since the two are equivalent) at the beach, she turned into an Assassin when she changed her clothes! Wielding a high hit-count Quick AoE Noble Phantasm, Ushi excels against 3-enemy Rider waves, and is irreplaceable if one has access to both a Skadi and Waver for looping.

Ushiwakamaru’s greatest strength lies in the tools she has to refund her Noble Phantasm gauge. Tengu’s Play (Summer) EX aids in this with a 3-turn Quick up boost, which when combined with Animal Communication D’s 40% gauge charge, will allow her to use her Noble Phantasm twice within three turns with minimal support. In fact, with a team using two Skadis and a Waver, she is more than capable of using three Noble Phantasms in three turns, each boosted with her Quick up bonuses. In addition, she has two methods of buff removal, using either her Noble Phantasm’s extra effect (offensive only), or by using her Heaven-Sent Child of Kurama A+ skill and normal attacking (40% chance). In the event she is not used for looping purposes, she can also produce a decent amount of Critical stars for the team thanks to her Presence Concealment C- and her high hit counts on her three Quick Cards and Noble Phantasm.

While Ushi does have one of the highest Attack stats in the game, she is still an Assassin with a lower base damage multiplier. Without proper support, her damage will be low and can be easily outdone by a 1-star Berserker against even Riders. Her high Attack stat comes at the cost of a lower HP pool, and with only a one-turn evasion to survive on, it will be hard to keep her in the loop. To make matters worse, that evasion is tied to her only damage steroid, making its usage in most scenarios never the most ideal.

Ushiwakamaru Assassin packs a diverse kit with much farming potential, especially when used in looping. Masters would be well served to get her if they need an effective wave-clearing Assassin. If a Master has Skadi and a Waver, however, she becomes a must have.

Ushi has an AoE Noble Phantasm with more than 2 hits, which gives her the potential to use her NP refund and supports to fire it more than once. With two Skadis and a Waver, she is capable of firing off three Noble Phantasms in a row in almost all cases against her advantage class (Riders). Even without these supports natively owned, she still can generate a lot of gauge just from her Tengu’s Play and Riding A+, creating many situations where she can fire it off twice. Her Animal Communication Skill’s NP charge plays a key role in her ability to loop.

There is a lot to say about Ushi’s buff removal, having it guaranteed to remove all offensive buffs on her Noble Phantasm, and providing a 40% chance to remove buffs on normal attacks with her third skill. In a challenging fight, these skills can cripple an enemy’s challenging aspects and make killing them much easier. However, she is lacking a guaranteed buff removal regardless of type so against Defensive buffs she may not be as effective.

Ushi has the trifecta of star generation: high Quick hit counts, high star generation rate, and high Presence Concealment. When using her Noble Phantasm she will litter the field with Stars, and having three Quick cards and a Quick Noble Phantasm means she will generate plenty of Quick chains. It is likely that many more hits after the first turn will be a Critical hit with her around, helping the team out in more ways than one.

Ushi is an Assassin, and Assassins come with an inherent 0.9x damage multiplier. She lacks any kind of Attack Up skill, and her Quick up buff is only middling in value. Further, Quick cards are the least damaging of all cards, making her deck less damage focused than others. As a result, without any support she has relatively mediocre Noble Phantasm damage, and poor sustain outside of it.

Ushi has a high base attack which can be seen as a boon to make up for her low damage, but it comes at the cost of her HP pool. Outside of a 1-turn evasion, she’s going to be taking huge percentage chunks out of her HP every time she is hit, to the point where an ill-timed Berserker critical hit could take her out in one or two shots.

Tengu’s Play (Summer) is Ushi’s only hard evasion, but it also comes with the most critical component of her kit: the three turn Quick Up. For Masters looking to use her in longer fights, this often means choosing between damage and Quick Card NP gain, or a saving it to use as a hard survival skill later in the fight.

Most masters who use Ushiwakamaru will be using her to loop Noble Phantasms. As such, the focus in leveling skills is to enable more compositions where she can fire her Noble Phantasm multiple times. Even when not using her to loop, the leveling strategies remain similar, as NP charges and Quick performance buffs are much more useful than extra Star gather rate.

In order to loop effectively, Ushi requires a starting Noble Phantasm gauge. One way to provide this is via Starting Gauge CEs. Another way is to provide her with a Mixed Starting Gauge / NP Gain CE to both increase her natural generation rate as well as providing her a starting point. Should a Master not be interested in looping with her, she would be well served with a Critical Damage Up CE to make use of her high Critical star generation and gathering skill.