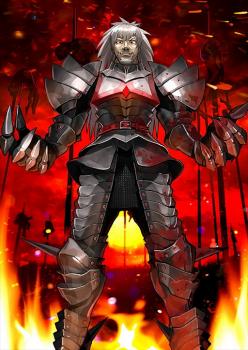 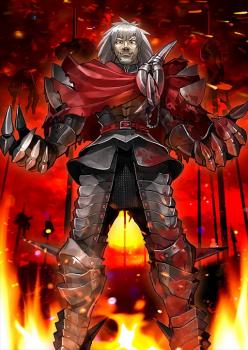 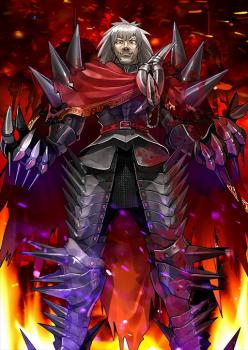 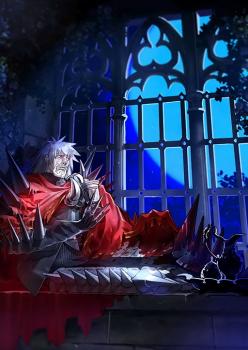 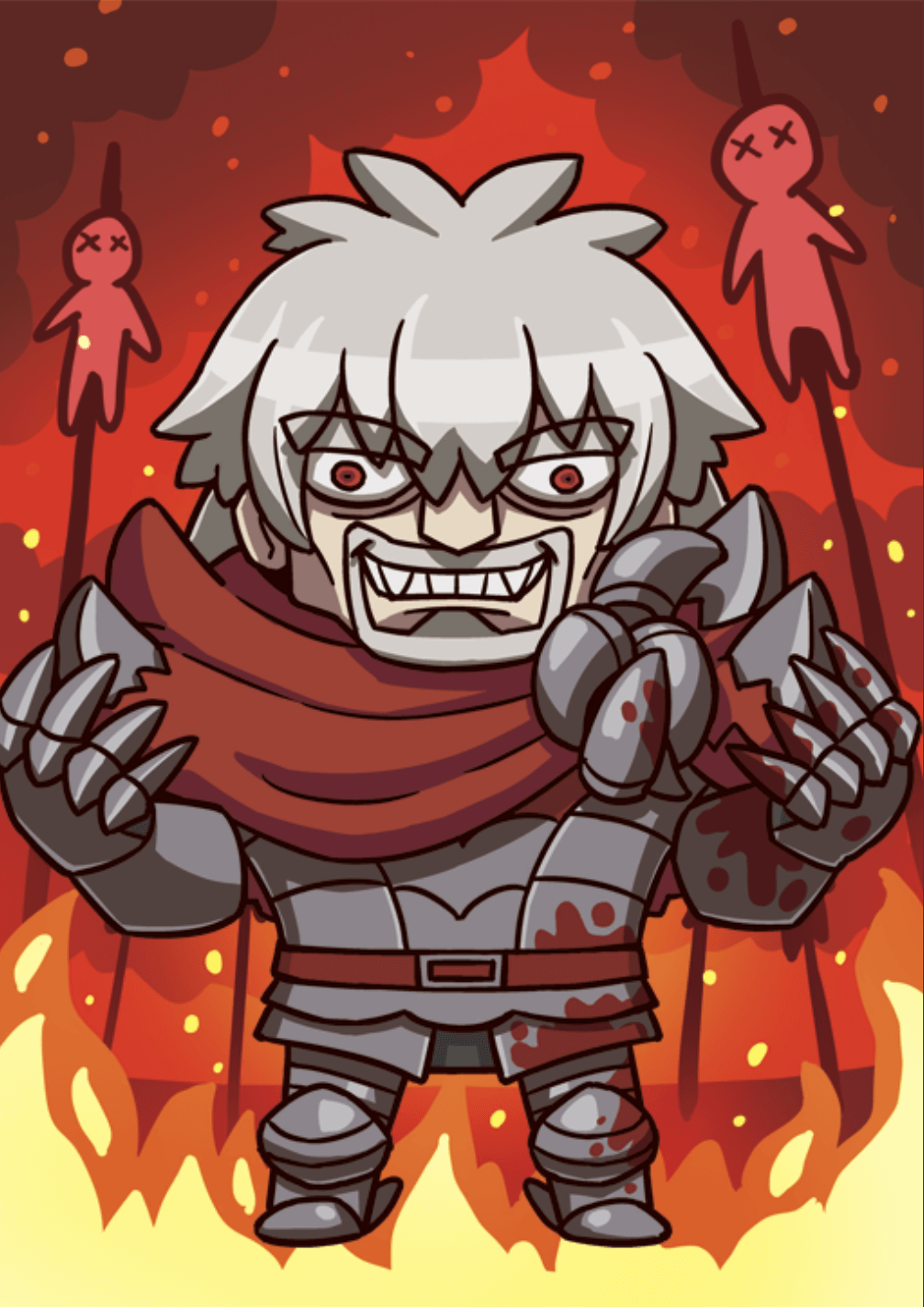 Protection of the Faith A+++

Apply Ignore Invincible for yourself (1 turn).
Deal significant damage to a single enemy.

The Fortress of Impalement

Creed at the Bottom of the Earth

When equipped on Vlad III (EXTRA),
Increases party's Quick and Buster Card effectiveness by 10% while he is on the field.

"With each victory, one's armor grows heavier with glory and sin.”

Hero and tyrant, man of faith and Lord Impaler. Vlad III (EXTRA) embodies the warrior side of the Prince of Wallachia, the one who resolutely dyed himself in blood and brought terror to Mehmed the Conqueror’s mighty Turkish army. As a versatile single-target Buster offensive Servant, Vlad’s combination of utility and damage makes him a reliable addition to Buster-oriented teams.

Vlad’s most notable strength is his versatility, in that he has the tools to handle a wide variety of situations due to his diverse skill set. His ability to draw enemy attacks for a turn with Innocent Monster is especially valuable, as it allows him to protect vulnerable support Servants. His NP damage is also quite high, particularly against Evil enemies. When Kazikli Bey’s anti-Evil bonus damage is combined with the offensive boosts from Protection of the Faith and Tactics, Vlad’s damage becomes quite impressive. Additionally, Vlad’s ability to both keep himself alive and sustain his damage output over multiple turns makes him a strong offensive Servant in longer fights.

In exchange for his significant versatility and utility, however, Vlad has lower overall damage output than most comparable offensive Servants, especially when he is unable to take advantage of his anti-Evil bonus damage. With relatively weak innate damage boosts and a strong-but-short-lived defensive boost, Vlad has a good base skillset but is lacking the pieces he needs to truly shine offensively or defensively. While he has a wide range of tools, his lack of focus leaves him dependent on support Servants in order to function at maximum effectiveness.

All in all, Vlad excels as a general-purpose damage-dealer, particularly against Evil enemies or in fights where additional team survivability is necessary. He is neither the best offensive Servant nor the best at protecting the team, but his ability to draw fire from support Servants while still providing respectable damage is often highly valuable.

While Vlad is primarily an offensive Servant, he also has a wide range of utility options. The Ignore Invincibility effect built into his NP, the high debuff resistance from Protection of the Faith, and the star generation and one-turn Taunt from Innocent Monster give him the capability to adapt to various situations and needs. His kit enables him to simultaneously deal damage and defend his teammates, all while keeping himself alive and providing a fair number of critical stars.

Vlad’s Noble Phantasm deals exceptionally high damage to enemies with the Evil trait. Even without the benefit of that bonus, however, it still deals a fair amount of damage thanks to his two offensive buffs.

Vlad is particularly well-suited for longer fights. The defensive boost, healing, and long-lasting Attack buff from Protection of Faith enable Vlad to stay alive and deal consistent damage over multiple turns. Additionally, he has good base NP gain and a favorable hit-count spread, allowing him to access his NP consistently. He can also leverage his taunt for significant defensive NP gain against enemies with high hit-counts, further improving his sustained damage output.

While Vlad can deal good NP damage (especially against Evil enemies), he has low Attack for his class and rarity and his innate Attack buff is fairly weak. This leaves him struggling to compete with other Servants in terms of pure damage output. He also lacks star gathering and critical damage skills, so his critical hits will be neither reliable nor particularly damaging.

Vlad’s kit (outside of his NP damage) needs to be supplemented by other Servants in order to shine. Additional defensive buffs or one-turn Invincibility buffs let Vlad defend against enemy attacks more effectively. Similarly, an ally’s star gathering or critical damage skill would allow Vlad to take better advantage of the critical stars he generates. While Vlad thus lacks the innate tools to function fully as a damage dealer against non-Evil enemies, his skills provide a wide variety of baseline utility, so with the help of proper support Vlad can fill a variety of niches.

Protection of the Faith is easily Vlad’s best skill, giving him a constant performance boost with a relatively low cooldown, and as such it should be taken to max level as soon as possible. Innocent Monster is also a valuable skill; at higher levels it provides more stars and lets Vlad protect the team more often, so it should ideally be leveled evenly with Protection of the Faith. Military Tactics provides a nice NP damage boost, but it is ultimately less important to Vlad’s functioning than the other two skills and can safely be saved for last.

As a damage dealer, Vlad wants CEs that can prop up his damage output. Buster Up CEs stack multiplicatively with the buffs in Vlad’s kit, helping to alleviate his low card damage while also boosting his NP damage. Alternatively, NP Damage Up CEs allow Vlad to lean into his already-strong NP damage for powerful burst damage turns. Starting NP Gauge CEs can help Vlad to reach a high-damage turn faster, and NP Gain Up CEs help him access those high-damage turns more frequently. While they are somewhat more situational, Taunt CEs allow Vlad to draw enemy attacks for multiple turns at the start of battle.

Busti's Stall Diary Chapter #453: Fascinating
1251 posts - 48 participants Read full topic …
General Amazones.com discussion
I apologise if I’m making a dupe topic. I did a quick search and didn’t see anything,…
Game update not showing for me?
Logged in this morning to burn ap before school, but was greeted by an error message…
F*** Waiting for You to Get it On Your Own, Penth gon Deliver to Ya!- The Amazones.com ~CEO Crisis 2022~ roll thread!
Welcome new employees, to your new position at Amazones.com! The most reliable and…
Busti’s Stall Diary Chapter #452: Madam Cosmotic Beauty's Earthling Self
Queen of Bad Timing herself. She is pretty great in general. Maybe one day she will…
Read More