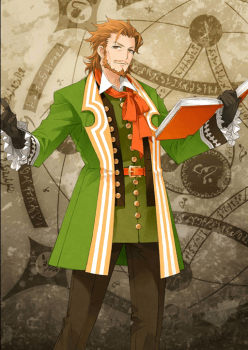 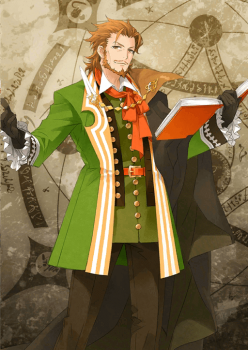 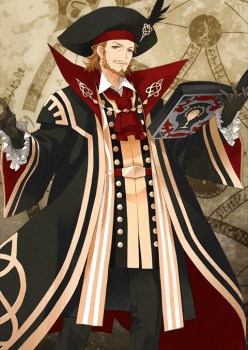 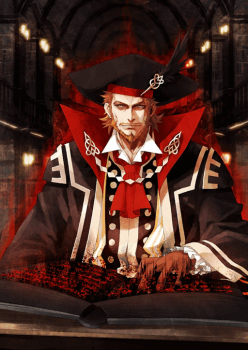 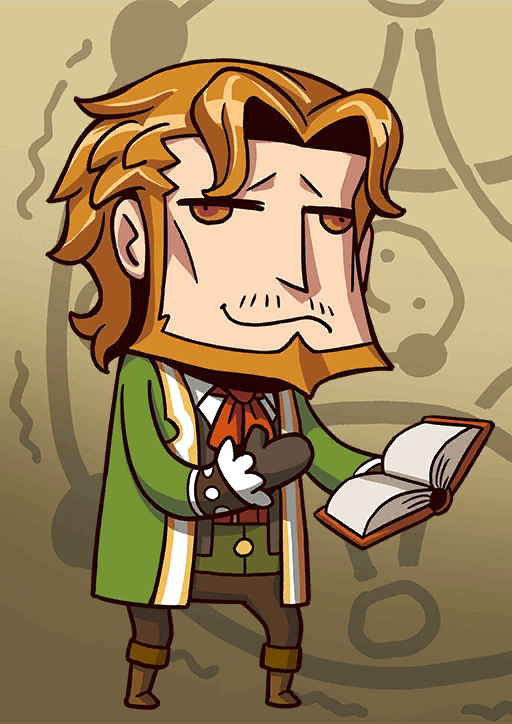 Apply Invincible to self (1 turn).
Recovers own HP.

Chance to inflict Stun for all enemies (1 turn).

When the Curtain Rises, There Will be Thunderous Applause

Unlocks after Rank Up Quest 2

<Overcharge> Chance to inflict Stun for all enemies (1 turn).

When the Curtain Rises, There Will be Thunderous Applause

When equipped to William Shakespeare only,
Increase NP Gain of all allies by 15% while on the field.

“I don't particularly hate anything. But I detest mediocre people. They simply live their lives as they are told.”

Responsible for some of the most well-known and beloved tragedies in theatre, the extravagant and erudite playwright William Shakespeare is a supportive Buster Caster suspiciously gathering more (tragic) material for his writing at Chaldea. Despite his weak base stats and limited usage in lengthy battles, Shakespeare is a highly useful Servant for both farming and shorter fights.

Shakespeare’s main values come from his two one-turn buffs. Enchant is a party-wide Buster buff that is as simple as it is powerful. It is well-suited for heavy Buster-centric compositions that need an extra push in damage for a crucial turn. Unlocked after finishing his Rank Up Quest, King’s Men represents his second main value as it makes Shakespeare one of the rare freely accessible Servants that are capable of charging a teammate’s NP gauge. NP Charging skills are always highly useful for pretty much any form of content but especially so when it comes to farming, and it comes with an additional sizable one-turn Critical Star Generation buff. Lastly, his second skill, Self Preservation, allows him to survive for a decent period, while his NP damage after his 2nd Rank Up is decent enough to farm wave 1 or 2 enemies.

On the other side of the spectrum, true to his identity as a non-combatant, Shakespeare’s sustained offensive (support) capacity is mediocre, a culmination of his low base stats, the Caster class’s 0.9x modifier on Attack and lack of long-term offensive buffs. Furthermore, as his two most useful abilities last only one-turn, Shakespeare is essentially picking his nose support-wise after using his skills. Even the utility on his Noble Phantasm is limited as First Folio’s low chance to stun all enemies upon dealing damageis simply too unreliable to be called upon in critical situations.

In conclusion, while Shakespeare is ill-suited for long drawn-out fights, he is a fantastic budget Buster farming support that will return his low investment cost a hundredfold.

Enchant provides a significant 40% Buster Performance boost to the entire team for one turn, which greatly empowers the performance of Buster-centric teams. This buff is particularly potent when used on explosive Buster Servants who lack any powerful Buster buffs of their own, such as Gilgamesh, Rama or Lu Bu.

With King’s Men, Shakespeare is one of the rare Servants who can grant a 20% NP charge to a teammate. NP Batteries are useful regardless of content, but are particularly valuable during farming sessions for any (Buster) Servants who lack an NP battery of their own. Note that the 50-100% Critical Star Generation buff on King’s Men will create a vast sum of Critical Stars if used in combination with an (AoE) Noble Phantasm with high hit counts

After Shakespeare’s 2nd Rank Up, First Folio packs a decent punch considering Shakespeare’s rarity. As Shakespeare has both good NP Gain and can use either King’s Men or Enchant for himself, he is a nice pick for clearing waves of weak enemies. Masters can choose whether to boost his damage or save his support for a later wave.

Self-Preservation is a nifty survival tool that allows Shakespeare to live through most Noble Phantasms and live for longer than most Servants of the same rarity. However, Masters may elect to intentionally let him escape the stage rather than trying to keep him alive considering the short duration of his support.

With a base Attack of 5798, no long-term steroids and a class unsuited for combat, Shakespeare’s normal Attacks hit about as hard as a wet paper towel. His Noble Phantasm does paint a slightly better picture, thanks to the upgraded damage from his second Rank Up Quest. He is capable of sniping weaker waves with his Noble Phantasm, but over several turns his damage output is distinctly lackluster.

All of Shakespeare’s skills only lasts for but a single turn. Combined with his lackluster overall damage and unreliable stun on NP, Shakespeare is rather unsuited for long combat encounters. Ideally, Masters ought to switch him out for another teammate after he already used his skills or NP, either through using Chaldea Combat Uniform Mystic Code or Craft Essences with Taunt effects.

Due to his status as a 2-star Servant, Shakespeare’s skill leveling costs are quite minimal. Furthermore, as he tends to not stay on the battlefield for long, there is no need to level his skills purely for the sake of lowering their cooldowns. In general, maxing Enchant (or at 9 if a Crystalized Lore is too valuable) and leaving the other two skills untouched is already good enough for most users of Shakespeare, and Master can save further resources for other Servants.

Ideally, Shakespeare should be used in one-turn setups or/and buff stacking teams. This means he is a fantastic user of Craft Essences that grant buffs Upon Entry. Taunt is another exceptional effect to be used on Shakespeare, especially as his job is mainly to support Buster-centric Servants who are often lacking in the defensive department. Other Craft Essences that grant Passive Partywide Buffs are great choices if Shakespeare must stay on the battlefield. In farming scenarios where a wave consists of low level Assassin / Berserker enemies, Masters can opt for a Craft Essence with Starting NP gauge to help clear the wave.

Shakespeare, and by extension most Servants with short duration but powerful buffs and/or NP Battery skills, are often best used in conjunction with the Chaldea Combat Uniform Mystic Code. The Mystic Code’s Order Change skill allows these Servants to either grant their buffs and support and then be swapped out for someone else, or vice versa, bringing them in to unleash a (final) devastating barrage of damage.

William Shakespeare is definitely the most renowned playwright and actor.
His name, which is highly praised in the world of English literature, is probably one of the most recognized names on this planet.

Even though he was a famous writer, half of his life is surrounded in mystery. He wrote some of the best literature known to mankind and there was no limit to his fame. In his time he was criticized as "an upstart crow" by writers senior to him.

Shakespeare uses short but effective words to expose things people are trying to hide. Being confronted by something so intangible must comes as a shock to anybody.

Enchant: A
Unique skill. Applies a certain concept to any weapon.
Originally this skill is meant to apply magical concepts to items but in Shakespeare's case, he can enhance a weapon beyond its innate potential through his writings.

[First Folio]
Rank: B
NP Type: Anti-Personnel
When the Curtain Rises, the Applause Shall Be As Ten Thousand Thunders!
The ultimate play written by Shakespeare.
Regardless of allies or foes, he can turn targets into characters of his play.
Capable of breaking the will of even the greatest of heroes, an Anti-Psyche Noble Phantasm.

One of the few Servants who "will not fight" during a Holy Grail War. The more interesting your choice is, the better he writes. On the other hand, if you are nothing special, he would probably leave you to your own demise.
That does not change, even in the current situation.

Second Append Skill (Summer BB)
Which Append do you think is better for Summer BB? Anti-Foreigner or Extra-Attack …
FGO NA - Nightingale's Christmas Carol 2021 Rerun - Farming Guide (6 SLOT & F2P setups)
FGO NA - Nightingale’s Christmas Carol 2021 Rerun - Farming Guide (6 SLOT & F2P…
Thanksgiving speculation thread, alias FGO KR making hopes for early Archuria
I’ll preface this thread with disclaimer, that everything here is a pure speculation…
Busti’s Stall Diary Chapter #556: The Black haired boys
Black haired boys are pretty, stunning and nice twitter.com …
Which of the LB ally servants were your favorites?
Click to view the poll. I had other servants in the poll, but had to cut them out due…
Read More