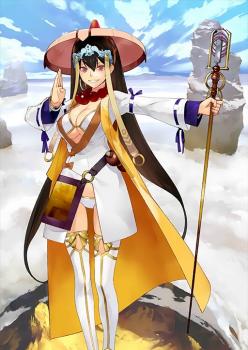 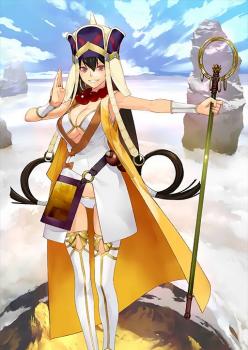 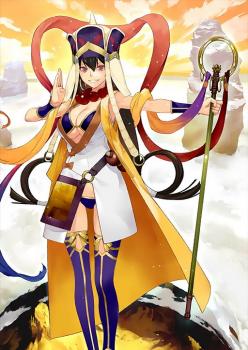 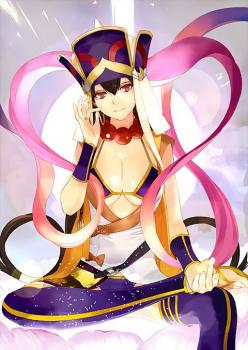 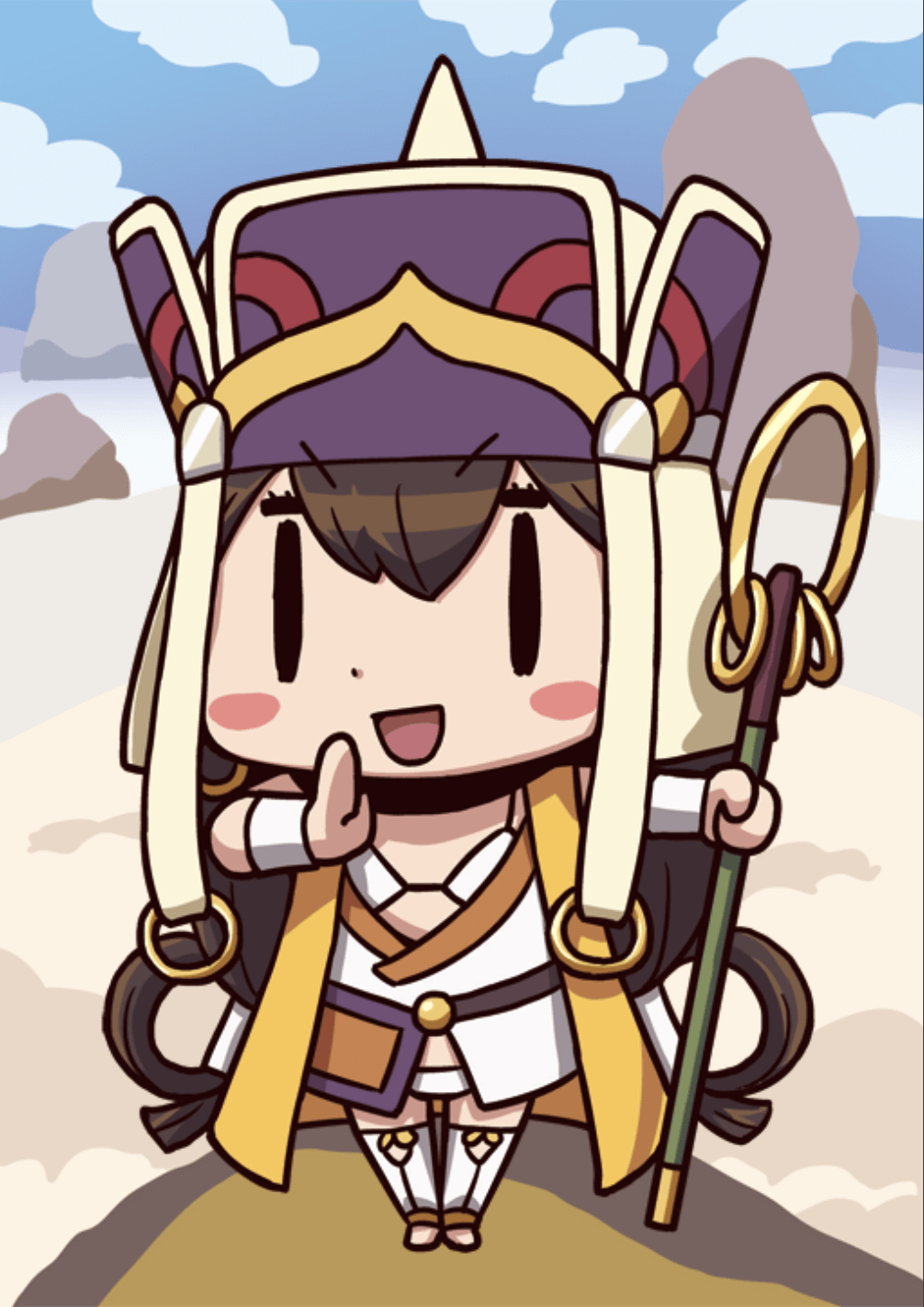 When equipped on Xuanzang Sanzang,
Increase Buster Card effectiveness by 20% and decrease DEF by 10% (Demerit) for all allies while she is on the field.

“I will make you my new disciple. Yes, I will raise you to be a splendid pupil of the Buddha!”

With fisticuff skills completely unfitting of the Caster class’s image, Sanzang has an equally unique image as a servant. Lacking the companionship of her more famous heroic pal Sun Wukong, she compensates by journeying forth with a mixed bag of skills and focus, and is essentially a ‘jack of all trades, master of none’ Servant with access to a powerful Buster NP.

Sanzang provides a multitude of benefits to the team. With a powerful NP gauge charger she can frequently punch out the opposition, while also generating a notable sum of critical stars thanks to her team-wide NP gain and star generation buff. Should her allies be threatened in a pinch, she can immediately draw away an enemy’s attention with a taunt while simultaneously bolstering her defenses. Lastly she has a rare niche in her team debuff immunity buff, completely nullifying even the harshest stuns, charms, NP seal, and so on that may be thrown in the team’s direction for one turn.

Unfortunately, ‘master of none’ is the keyword for our legendary monk. While her offensive might is better than most Casters, comparative to the entirety of the Servant cast her offense is weak despite being her main focus. Furthermore, her two supportive skills, while certainly useful in their own right, pale in comparison to the supportive options her fellow Casters can provide. That isn’t to detract from the power of her supportive skills in a vacuum, however. Until she gains access to her NP Rank Up, her NP’s damage isn’t particularly outstanding, but past that she becomes one of the stronger options for single target damage versus Assassin-class foes.

On the whole, Sanzang is a solid and consistent offensive Caster with some unique supportive tools to her kit which allow her to shine in more specific scenarios, even if her damage output tends to lose its glimmer when put side to side with her competitors.

Sanzang can be considered something of a safety net investment. While she generally gets outperformed by competing Berserkers for when damage output is the name of the game, her relatively high durability and supportive bonuses can edge them out in more difficult quests where defense becomes as important as offense. Especially with her NP’s damage post-Rank Up in play, she becomes more of a force in battle, capable of crushing foes into many a mountain with both force and frequency with the right support, while still providing her useful supportive utility.

While having easily-accessible immediate NPs isn’t a foreign concept to the Caster class with servants such as Medea, Sanzang’s packs an immense punch, especially after her NP Rank Up. Thanks to the 80% NP gauge charge of Rapid Sutra Chanting, she can easily run a pure offensive CE while still being able to unleash her NP immediately with just a NP gauge-charging support or the Mage Association Uniform Mystic Code.

While Sanzang may only possess one supportive skill, it is an incredibly good one - Sanzang's Teachings grants the entire team a moderate star generation buff, an NP gain buff and an one turn debuff immunity, all of which can be appreciated by most teams. Furthermore, Sanzang's Teachings’ short 7 turn base cooldown makes it easy to pop constantly, with a downtime of only 2 turns at level 10. While Sanzang does not remain the only servant capable of providing debuff immunity to the team with the eventual release of Murasaki Shikibu, it is still an incredibly useful buff that can deny crippling debuffs in more difficult challenge quests.

Though she is by no means a dedicated tank, due to her low HP pool and otherwise lack of durability, Sanzang is more than capable of taking a few hits for the team’s sake if needed due to Captivating Rosy Cheeks. It is unimpressive in both cooldown and duration, but it notably packs a 1500 damage cut buff at level 10, usually halving the damage taken from regular hits, or more or less nullifying resisted attacks. This in itself allows Sanzang to draw attacks away from more vulnerable allies such as Berserkers and take relatively little damage in return, though she is still more than vulnerable to enemy NP’s. It’s also worth noting in most circumstances it gives Sanzang an assured 9% (12% with her NP gain buff active, or more if the enemy has multiple hits per attack) NP gauge from her defensive NP gain when being attacked, should you be desperate to get her NP charged next turn.

While Sanzang’s damage output is above average for her own class, when it comes to focusing on eliminating Assassin targets, she tends to be outdamaged by competing Berserkers. A result of being pulled down by the Caster class’s 0.9x attack modifier and her relatively middling attack in comparison to more offensively aligned servants. Furthermore, Servants such as Kintoki can also pull off a turn 1 NP in a similar manner while dishing out immensely more damage, especially in a brave chain. Within her own class, Ilya also packs notably better damage output per NP but lacks the NP charging capability Sanzang possesses. In situations where the enemy’s offensive output is high, however, Sanzang can shine through with her relatively immense durability compared to Berserkers.

Sanzang may pack some supportive skills of her own, but on the whole her kit requires support from other servants to reach its real possible potential - she needs a 20% NP gauge prop from an external source to immediately NP with her first skill, her taunt can’t take the brunt of a single target NP without additional defensive support, and her own team buff doesn’t particularly aid with offense or long term healing on its own. On the plus side most of those issues are fixed simply by pairing her with NP gauge-charging supports or using the right Mystic Codes, but that still restricts her options for fitting into a team where other servants have no such issues in exerting their kit.

Both Rapid Sutra Chanting and Sanzang’s Teaching are high priority for Sanzang on the whole, as leveling both of them aids her key niche of a near-instant NP, as well as increasing the effectiveness of her powerful supportive buff. Captivating Rosy Cheeks still improves notably while leveling it, increasing the damage cut and reducing the cooldown by a significant margin, but it isn’t a key component to Sanzang’s kit. It is generally more of a clutch option should the team suddenly need someone else to survive an NP turn.

While Sanzang has one of the best NP gauge chargers in the game, she still wishes to focus on Starting NP Gauge for her craft essences, as it allows her to throw out an NP on the first turn she steps into the ring. If there is sufficient team support or a couple of turns to build her NP gauge manually, she can instead focus on Attack Up, NP Damage Up and Buster Up for her CE effects, which further increase her NP’s damage output on top of Rapid Sutra Chanting A’s NP Damage Up buff.