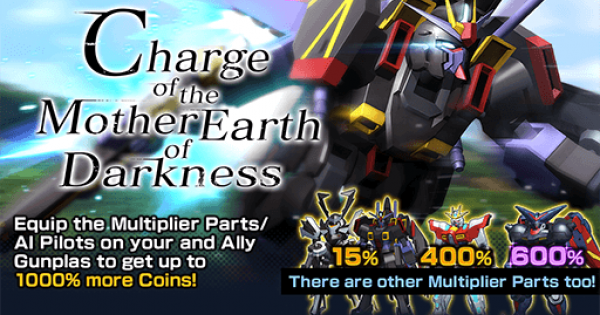 Hello Pilots! This week we have the Gaia Gundam, coming to us with the worst event name in the history of the game. Hopefully the name isn't a portent of the mobile suit, but let's find out!

Average stats across the board, Transformer and Gundam Type word tags, and CIWS, which are just Head Vulcans by a different name, I cannot see any reason outside aesthetics to want to use this head. The one and only redeeming quality is Gundam Type, but with a tiny 558 Armor, it's not worth it.

Above average defenses, average ATK, Transformer and Gundam Type word tags, and a trait that reduces enemy EX Skill Piercing by 22% when an Out-Fighter. The only reason this torso doesn't get an F outright is that the trait is somewhat unique even if it isn't anywhere near as good as lowering Melee or Shooting Power, and the defense stats are acceptable alongside a Gundam Type tag. Still not a good part, but it just barely squeaks out over a failing grade.

Average stats all around, Transformer and Gundam Type word tags, and a trait that increases Strong Melee Crit by 17% when Transformer is active. A garbage trait that requires a garbage tag active, on arms that do not stand out in any way otherwise? Hard pass.

Average stats all around, Transformer and For Forest word tags, and a trait that gives you a 13% chance not to recoil when Speed Attribute. Hard pass

Identical stats to the legs, same word tags, but an alright EX Skill. It's no magazine skill, but it is in the class of skills that could be good with a little Initial CD reduction. This potential is what saves this part, and if you want to experiment with EX Skills in Arena that aren't magazine skills, this isn't a bad part to pick up for that purpose.

Low Melee ATK, Transformer and For Forest word tags, and a trait that boosts the Job Gauge by 13% when using an Outfighter. I see zero reason for anyone to use this weapon ever.

FINALLY! A good part! This sports low ATK, the Transformer and For Forest word tags, but the part trait is spicy! +25% EX Skill Power when Speed Type. This is the Beam Zanba, but for Melee users. The part is ever so slightly overshadowed by the Duel Gundam 3* Rifle, which is the exact same thing but better ATK and tags, but that's gacha exclusive and this is in an event shop, so if you don't already have a maxed out Duel Rifle, pick this up and max it out, it's very strong for Melee builds.

It's got some stats alright, mhmm. Transformer and Gundam Type word tags, and an EX Skill that has a very specific niche. Shield Throw is a great skill to have access to, since it is fast and ranged, like the Halberd Throw, though being Pierced Based means it's too weak to function as a replacement for the Halberd Throw. What Shield Throw does have, though, is a huge amount of staggering on the skill, often stopping other suits and EX Skills in their tracks, making this a great defensive tool against Overkills and other cutscene skills, especially those with a dash.

Well, that's all for the Gaia. It may seem overly harsh, but we really did get the worst event suit in the history of the game to go alongside the worst event title in the history of the game. It's unfortunate, because while the overall look of the Gaia isn't too appealing, I can see basically each part working very nicely on an aesthetic build. At least there's the Rifle for function...anyways, I'll see you all next week pilots!

If you need me, you can find me over at the GamePress Discord Server.