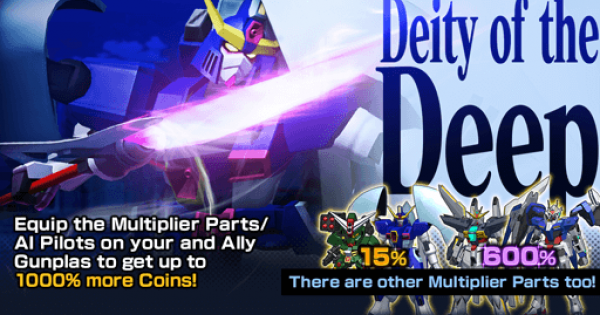 Hello Pilots! Your resident friendly Scubasage back again, with a very thematic suit for review! What better suit for me to review than an aquatic one? Anyways, here's the Abyss Gundam, let's dive right in.

Not off to a strong start. Average stats all around and an above average 1999 Shot ATK, this part comes with the Amphibious and Transformer word tags, and a trait that boosts Mid Shot ATK by 14% when using a Lance weapon. The stats are nothing special, the word tags are awful, and the trait is highly inconsistent, making it pretty bad overall. I'd pass.

Average stats all around, Amphibious and Transformer word tags, and a Pierce based filler EX Skill. Hard pass.

Another one with average stats all around, Amphibious and Transformer word tags, and a Pierce based filler EX Skill. Hard pass.

Average stats all around except for stellar 559 Shot ATK, Amphibious and Mid-Range word tags, and a trait that increases projectile speed by 14% when using a Technique attribute suit. Finally, a decent part. The trait is pretty low value and the word tags aren't the best, but 559 Shot ATK legs are still very strong overall, even with the Command Gundam legs being more or less identical. These aren't SD, which gives some extra value to some people, I'm sure.

Another back that is different from the legs! I think they took my jabs to heart. Anyways, average stats all around, Amphibious and Mid-Range word tags, and a Power based filler EX Skill. This isn't great, but if you're lacking on EX Skills this will be okay for normal missions. I'd probably pass though.

With terrible Melee ATK at 1438 and some defensive stats, Amphibious and Transformer word tags, and a trait that boosts Initial EX Skill Cooldown by 12% when Transformer is active. This is nice because it gives a Shooter equivalent to the Hyper DODS Rifle from the Age-2. I'd definitely pick this up and max it out, you can never have too many Initial CD parts.

Well, that's the Abyss Gundam. Next, we have a couple of older event suits that have returned through the event blueprint. I'll be skipping the Gouf Custom since I reviewed it before, and you can find that review here: https://gamepress.gg/gundam-battle-gunpla-warfare-troopers-blue-spirit-parts-review

Looking back at it, I was definitely a little lenient with grades, though a lot of those grades are based on Close Combat being on most of these parts and there being a lot less Close Combat parts back then. Anyways, moving on, let's look at the Gundam TR-1 (Advanced Hazel).

Average stats except for very low 889 Shot ATK, Long-Range and High Mobility word tags, and a trait that reduces shot spread by 15% when using a Technique Attribute suit. Hard pass.

Average stats all around except for high 1702 Armor, Long-Range and High Mobility word tags, and a decent Power based filler EX Skill. Not a spectacular part, but something to look at if you need an EX Skill and want a high Armor part at the same time.

Average stats all around, Long-Range and Federation word tags, and a Power based EX Skill. This skill isn't top tier, but it is one of the best Shooter EX Skills to come from event parts. Obviously nothing dethrones the king that is the Crossbone Torso, but this is probably in the top 5. If you missed out on the Crossbone Torso, Strike Noir Back, Mack Knife Arms, this is a solid alternative.

Identical to the legs except for swapped RES stats and a different EX Skill. Here we have an awakening, and a pretty terrible one at that. Speed + 20%, Melee ATK + 19% and Physical RES + 49%. When this first came out there was a lack of good awakenings and we were in the Buff meta for Arena, so something like this wasn't too bad, but now that we have had a plethora of +39% ATK Awakenings from event parts that are also better standalone parts than this, this is definitely a pass.

With some defensive stats, Long-Range and Federation word tags, the real draw here is the trait, that boosts Buff EX Skill Effects by 15% when using a Technique Attribute suit. This was amazing in the old Buff meta and currently is out of favor, but if Buffs ever become meta again, this is a very nice piece to have.

Identical to the Shield Booster, but instead of a great trait we have a Pierce based filler EX Skill. Pass.

Well, that's the TR-1 done. We have one suit left to go, the Stargazer.

Average stats except for low 889 Shot ATK, For Space and Support Type word tags, and a trait that boosts Shot Guidance by 14% when using a Speed Attribute suit. Pass.

Above average defenses, average Melee ATK, 0 Shot ATK, For Space and Support Type word tags, and a trait that reduces enemy Strong Melee Power by 30% when Speed Attribute. Another pass.

Average stats except for low 889 Melee ATK, For Space and Support Type word tags, and a trait that boosts Beam Ranged Weapon reload speed by 15%. Also, this is a combined Arms + Shield part. Skip.

Above average defenses, average ATK stats, For Space and Protag word tags, and a trait that reduces EX Skill damage taken by a flat 25 when Speed Attribute. How many different ways can I tell someone to pass?

Identical to the Legs with swapped RES stats, we have an Awakening skill with +20% Speed, +19% Shot ATK and +29% Shot DEF. Like with the TR-1 Awakening, this has since been heavily outclassed. Save your resources and skip this.

Well, that's the Stargazer. I see no reason to use any of these parts over an Artemis part, which is sad cause I actually really like the Stargazer's design. Oh well, you win some you lose some. That's it for this week pilots, I'll see you later.