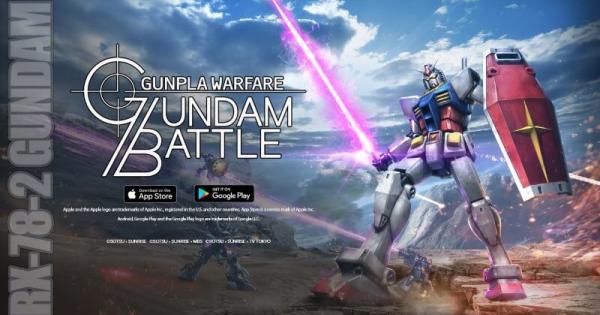 One of the biggest questions we keep seeing come up for free to play players are whether or not some two star and three star parts hold up under the scrutiny of some of the insane four star parts we've seen so far in Gundam Battle Gunpla Warfare.

Today we're going to break that down and mythbust it for you. So let's start with the basics!

Also: HUGE thanks to redditor u/StrawberryClorox for creating the spreadsheet that made these comparisons so much easier.

Are Four Star Parts All They're Cracked Up To Be?

In a game like Gundam Battle Gunpla Warfare, where you can take a base two star part (green) and upgrade it with awakening chips, you might initially feel like upgrading those parts is useful.

After all, using duplicate parts, you can upgrade Ex Skills and Passive Traits, and its much easier to come by green or white parts (like our friend the Guncannon that can be had via free rolls from our friend points), but the benefit isn't always there. When you compare 2 star or 3 star parts to natural 4 star parts, the difference in base values is really large. And without getting too deep into the math, the reason this matters is because if i have 1000 melee defense and you have 1000 melee attack, you will be doing zero damage to me. If this were not the case, base stats would not matter as much. But because this IS the case, base stats become quite important.

Now, prior to the buff to the Artemis parts, and the addition of code Phi parts, we used to have clear and distinct tiers. All 4 star parts had higher values at max than all 3 star. All 3 star had higher stats and values than all 2 star. Etc. It looked like the image below, with the only deviations being the top 3 blue parts. 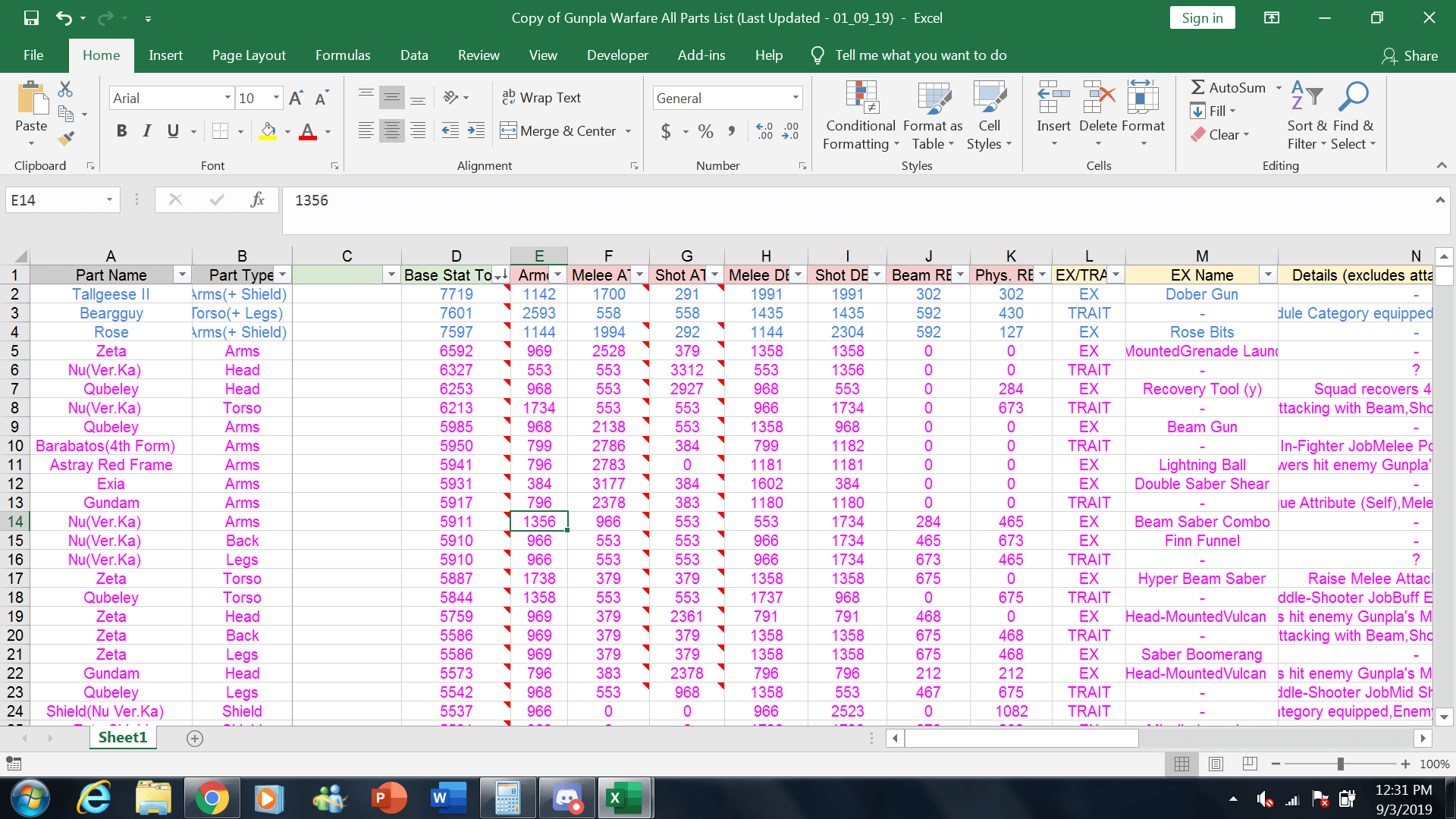 Of course, you need to remember that Tallgeese Arms, Bearguy Torso, and Rose Arms are actually taking up two slots - so they really don't belong on top. While the total stats are really high for those parts, you're losing an entire piece of armor in a second slot for that total, so the actual value should be halved. When you cut that value in half, the blue parts fit where they ought to. Or at least, it used to be that way.

After the buff of Artemis parts, and the addition of code Phi? Well -- now our chart looks like this for the highest base value parts in the game: 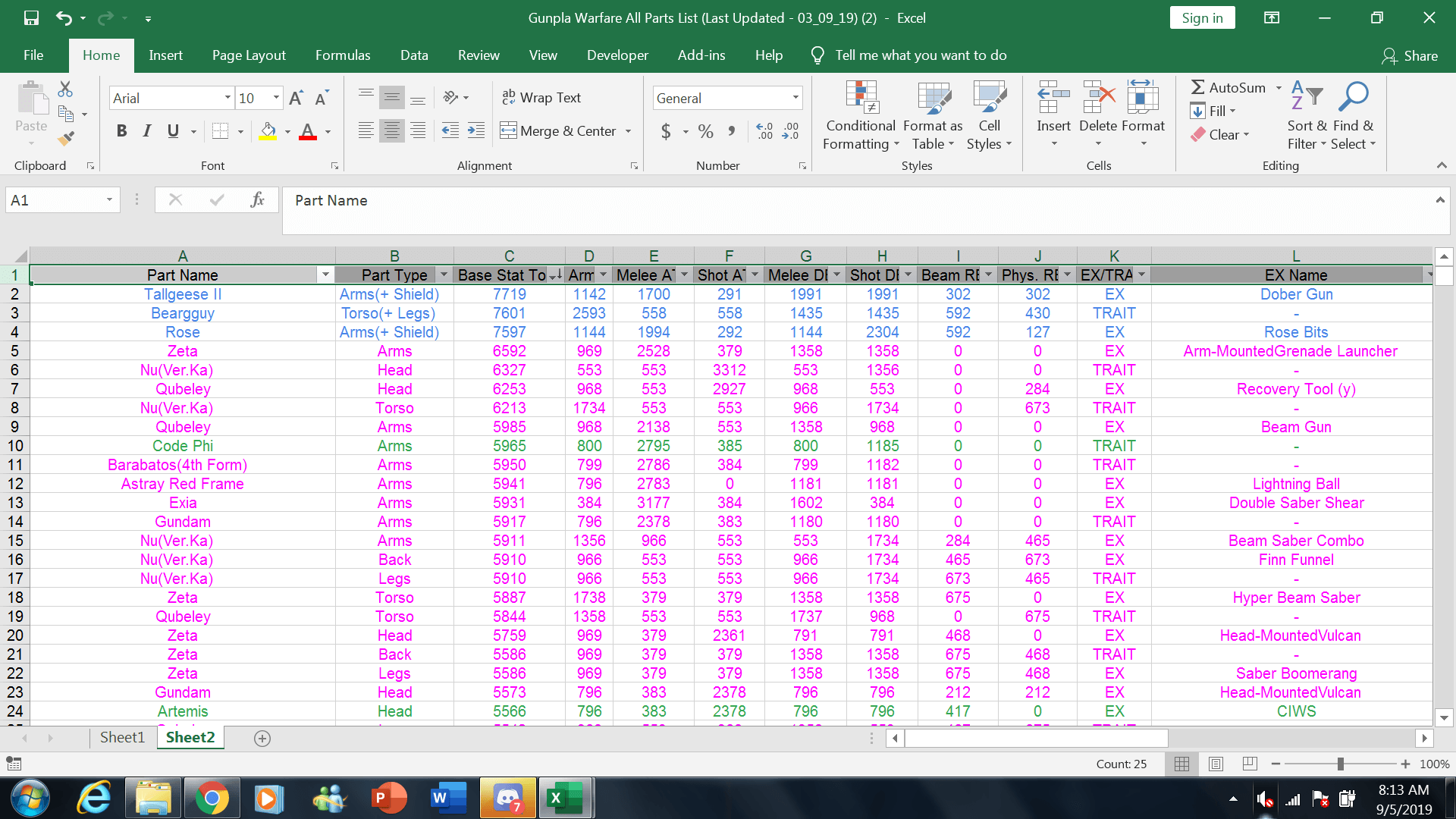 A few more things we need to cover:

Let's check out a few that really do stand head and shoulders above the rest.

Let's break this down. The below pieces are indeed in a tiered order of what I feel is the strongest/weakest. Because base stats are not as good as four star parts (in every case EXCEPT noted below) -- the distinguishing factor making a part punch above its weight class is the ex skill or part trait - making my opinions subjective. These are simply the parts that stand out with closer to 4 star ex skills and part traits that are certainly worthy of upgrading.

S Class - These are parts with stats that live up to 4 star natural parts. They may not always have the best ex skills or part traits, or the part trait or ex skill may be good enough to justify the loss in stats, but they should live up to serious tier list discussions with 4 star purple parts.

A Class - These are parts that are above a normal 3 star but not quite to that 4 star level. They're in the 3.5 star tier. Blurple parts. Usually this is due to the Ex skill or Part Trait being closer to 4 Star than 3 Star.

B Class - These are parts that fit more in the 2.5 to 3 star range. They have interesting properties that could be used on the right team to make something really good. 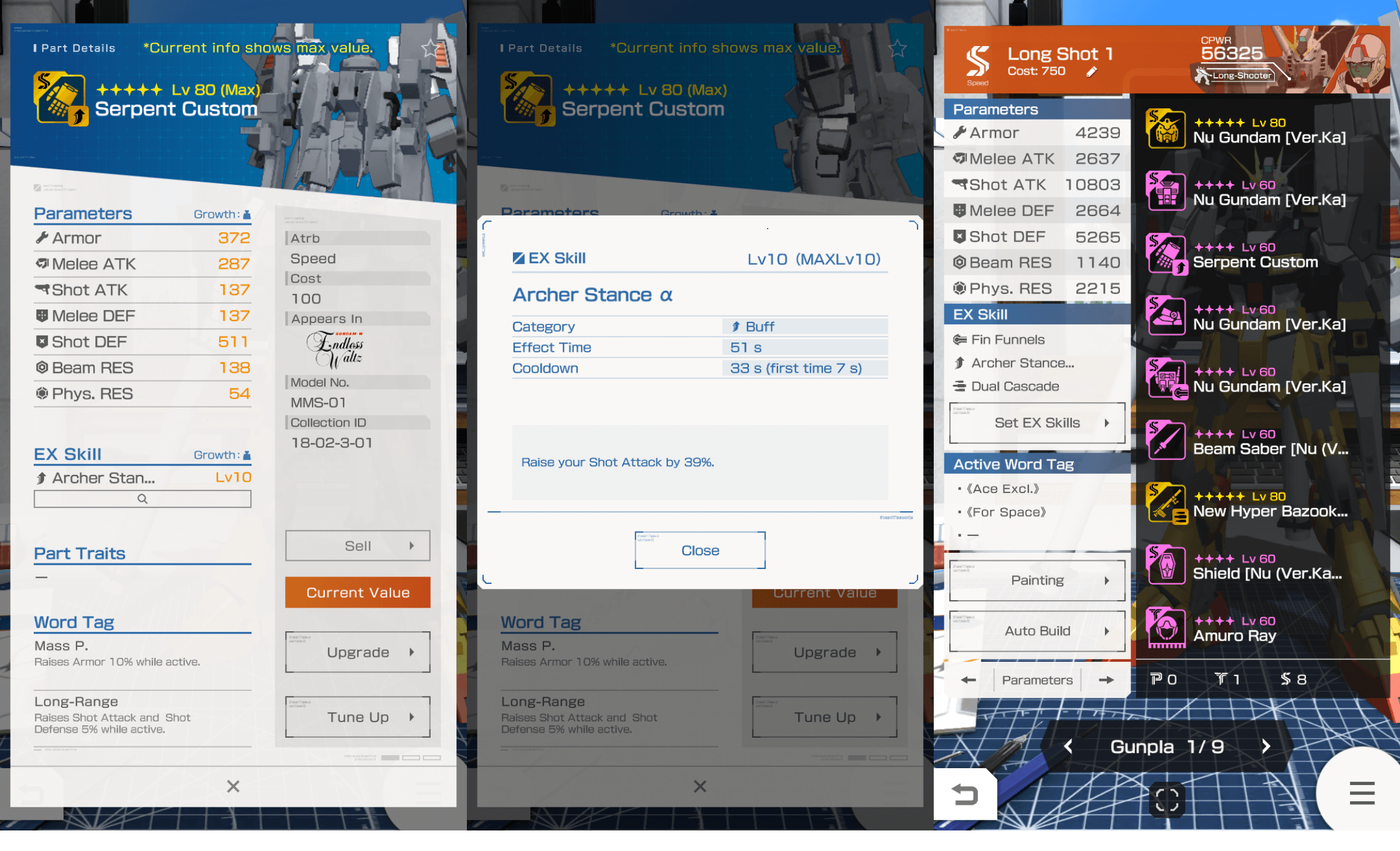 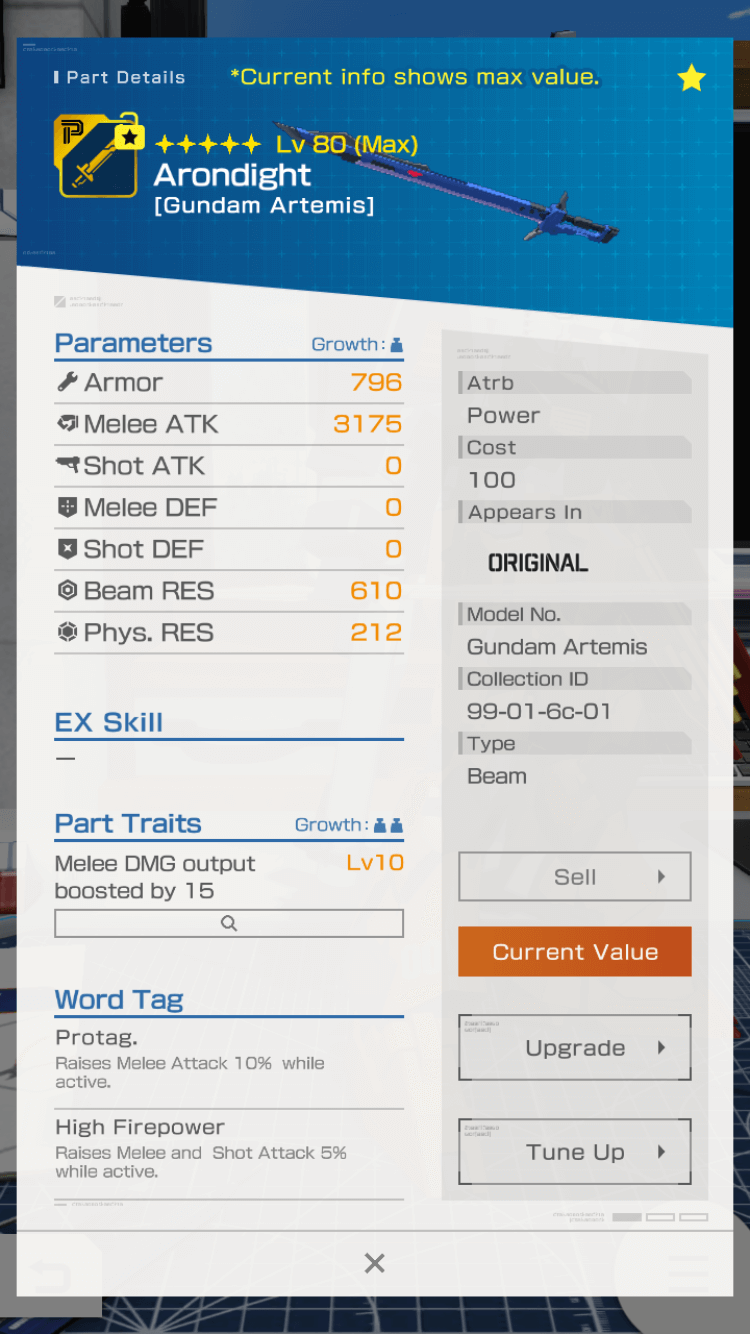 You need to consider when looking at building out a suit that if an opponent has high enough defense, they could completely negate any attack you have, so having items that artificially buff your ex skills or base stats are going to provide you more damage overall consistently and help you not get zeroed out when facing off against really tough opponents.

All in all, I'd still recommend using any natural 4 star piece over an A Class or B Class piece listed above, but if you have missing slots, the above list are the things I'd most recommend looking at (while of course considering your build and profession) in determining what to awaken and what to use. And again -- the build matters most. In the right build, even a 1 star piece can be useful (like in the image below). 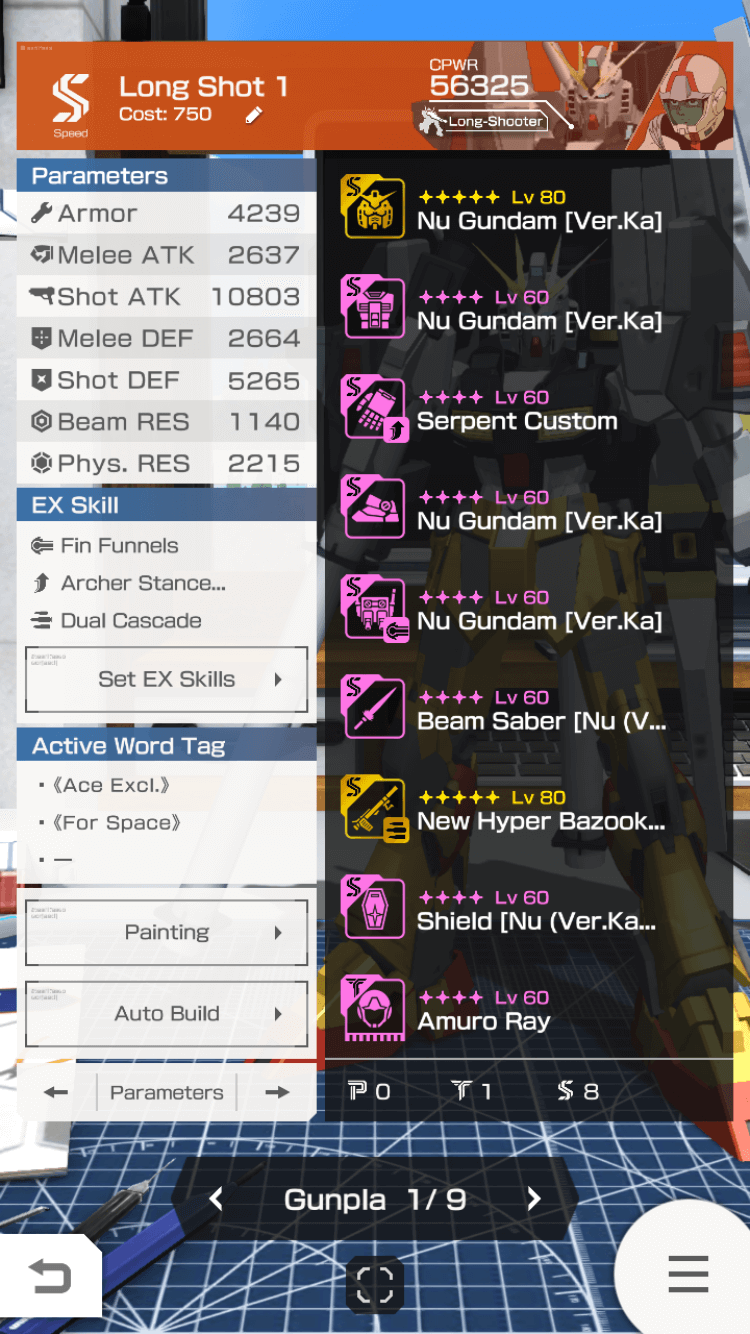 Hopefully this guide provides you with some things to think about and a rough outline of some of the best stats/parts in the 2 star and 3 star range. Any piece in the 3 star range that you can get all the duplicates for will certainly help you overcome the stat differential in a natural 4 star piece temporarily. Just remember, turning those pieces into 5 star pieces simply won't overcome (in most cases) the base values you get out of natural 4 star pieces. For that reason we'd recommend NOT awakening a 3 star piece or 2 star piece to 5 stars (excluding the Artemis and Code Phi gear with 4 star base stats -- go ahead and 5 star those if you like) unless you have no other viable 4 star piece to awaken and want to sink the investment into it. CPWR alone can be misleading as it heavily favors boosted Ex Skills and part traits.