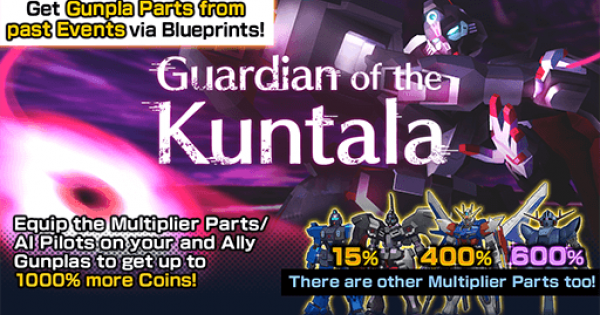 Hello Pilots! Did you miss me? I'm back from the break with a new event to go over with you all. This event is a big one, bringing us not only the Kabakali but also a selection of older event suits back again from Blueprints. I'll be reviewing all of them. Let's start, shall we?

Starting off strong, we have a head with somewhat low armor, average ATK stats, average defenses, Mid-Range and For Computer word tags. All together, this seems pretty lackluster, but the trait is a good one. When using a Technique suit, Enemy Shooting Power is reduced by 25%. This is like the Kyrios head, except instead of being forced to use a bad weapon type, you just need to be a specific Attribute instead. If you want to make that sort of tanky mobile suit that stacks these traits, this isn't a bad one to grab. Be sure to grab duplicates if you do plan to use it, since the trait being maxed out is the reason to use this in the first place.

Average stats all around, Mid-Range and For Computer word tags, and then a Pierce based filler EX skill. Pass.

Another piece with average stats all around, Mid-Range and For Computer word tags. The EX Skill is a little bit better, being a B+ Power Skill, and it has a dash forward. Not the best thing around, since the Melee ATK is low for the slot overall, despite being average for 3* parts, but if you really want to use Melee in Arena and have nothing else, this is better than most Melee skills.

A third piece with average stats, Mid-Range and High Mobility word tags, and a trait that boosts Mid Shot ATK by 14% when using a Whip. It's nice that we get some Whip support, but this ain't it chief.

Yet another Leg and Back combo with the exact same stats and word tags. In this case, instead of a trait, we have another ranged Melee EX Skill, but it's Pierce based so pass.

Average Melee ATK for a 3*, which makes it low overall, Mid-Range and For Computer word tags, and a trait to boost Strong Melee Crit Chance for Outfighters. Hard pass.

Average Shot ATK for a 3*, which makes it low overall, Mid-Range and High Mobility word tags. This comes with a B- Power small AoE Magazine skill, which normally would be really, really good...if it wasn't tied to a Ranged Weapon with such low ATK for the slot. This slot is the most important one for a Shooter, and wasting ~1800 Shot ATK to get this skill isn't worth it.

Well, the Kabakali is...not impressive. Which is a shame cause man I love the looks of this suit, even if I think it probably doesn't mix well with many other parts. At least we have some more suits to go over though, so maybe there are some more good parts hiding here? No spoilers, but yes, there are. Next, the Delta Plus.

Remember how I said there were good parts? This isn't one of them. Head Vulcans, average stats across the board except for pitifully low Shot ATK, and Transformer and Federation word tags, this is the hardest of hard passes.

High armor, above average Melee ATK, average everything else. Transformer and Federation word tags again, and a bad trait that boosts EX Skill Damage by a flat 20 if you are Power Attribute. Normally I would recommend a copy because of the Melee ATK being above average even for a 4* suit, but given the other suits we have available this week, I'd pass on this.

Above average Melee ATK, no Shot ATK, average defenses, Transformer and Federation word tags yet again, and another bad trait. This time the trait reduces Sp. Shot damage by a flat 20 when using a Rifle...yikes. This trait is awful. The only reason this doesn't get an F is the Melee ATK being salvageable, even if it's not actually high.

Above average defenses, average ATK stats, Transformer and Mid-Range, and a trait that boosts Sp Shot power by 25% when above 60% Armor. The trait is a strong boost to a weak category of attacks, so it's pretty lackluster. Still, it might be useful if you like to use charged shots instead of EX Skills.

Identical stats and word tags to the legs, what a shocker. That being said, the trait is very different here. With Power Attribute, it boosts Buff EX Skill effects up by 15%. In the old Arena meta, under the Overkill focused Battle Assessment, this was best in slot for Shooters, despite what my old guide used to say. Nowadays Buff skills, and therefore this back, have no place in Arena, but in the future if the BA changes again so that Overkills become viable once more, this backpack will see some use I'm sure. Pick this up and get duplicates to max it out if you can, it's a good part to have handy for the future.

With above average Melee ATK, Transformer and Federation word tags, and a trait that boosts Strong Melee Power by 20% when Armor is 60% or more, this is like a Melee, and worse, version of the legs of this suit. The Melee ATK, despite being good for a 3* part, is low for the slot, which is what holds this back. Not that the trait is amazing either, it's not, but it's better than nothing.

Low Shot ATK, and well, I don't really have to talk about anything else here. The low Shot ATK alone makes this weapon unusable garbage.

It's got some stats on it, sure does, as well as the Transformer and Federation word tags. The real draw here is the EX Skill, being a Magazine skill with C Power. Not the greatest, but it's a serviceable skill in a slot that usually doesn't offer much besides word tags. If you like the skill, grab duplicates to max this out. Otherwise you can probably pass on this.

Okay so the Delta Plus honestly isn't much better than the Kabakali, but we still have two more suits to go! Next up, the Sword Strike Gundam

Average stats all around, good word tags in High Firepower and Close Combat, and a Debuff EX Skill. Unfortunately, Debuff skills are very weak in general, so this head is only worth using if you want the word tags on it. Definitely do not grab duplicates.

Remember how I said I would recommend the Delta Plus if it wasn't for something else? This is why. Average defenses, high ATK stats, High Firepower and Close Combat word tags, and a trait that reduces Enemy Strong Melee Power by 25% if you are fighting a Large enemy, so anything that is 1/100 or 1/60 scale, or things like the Big Zam from the soon to be returning Multi-Missions. The trait is nice but not anything special, it's more the stats here. 558 ATK on both ends places it above the average for even 4* suits, and it has good word tags for both Melee and Shooters. Definitely grab at least one copy of this, and you might even want to consider spending a 5* mold to grab this at 5*.

These arms have low defenses for including a Shield, but where they shine is their ATK stats. They have super high ATK, higher than the average Melee ATK of 4* arms, and incredibly high Shot ATK, well above the average for a 4*. Their Shot ATK is so high, in fact, that they are the 6th highest Shot ATK Arms in the game, only a tiny 20 Shot ATK behind the 5th place arms, and 40 Shot ATK behind the 4th place arms. They come with the High Firepower and Close Combat word tags, and an EX Skill that Buffs Melee Defense, so duplicates aren't necessary for this piece. The only reason it gets an A- is because of them taking up a shield slot and having super low defenses. Otherwise, these are stellar, and worth grabbing as a 5* piece using 5* molds.

Average stats all around except for above average Melee ATK, these come with High Firepower and Gundam Type as word tags, and a trait to boost Melee Crit Rate by 17% against Large Enemies. Definitely skip getting duplicates. These are pretty decent legs, at 558 Melee and having High Firepower, so if that appeals to you, you might want to grab a copy.

Same stats as the legs, minus the swapped RES stats, same word tags too. This part comes with a B power Melee skill that has a dash and is a small cinematic, so it's something to use in Arena if you don't have anything better for your Melee suit.

Above average Melee ATK for a 3*, still low for the slot, a filler Pierce based EX Skill, where this part can maybe be salvageable is the word tags, High Firepower and Close Combat. Generally though, if you're looking for a good Blade, just use the Arondight.

Well, the Sword Strike was surprisingly good. Not surprising for those of us who remember when it first came out, as it was extremely good for an event suit even back then, but still. Final suit for today is the Blitz, the second ever event suit. Has it held up? Let's find out.

Average defenses and Melee ATK, dismally low Shot ATK, High Mobility and For Urban Area word tags, this Head's only worth is its EX skill, a skill that heals an ally by 38%. The user can't heal themselves, though, so keep that in mind. This Head is strictly for a Supporter role.

Average defenses and Melee ATK, no Shot ATK, High Mobility and For Urban Area word tags. Like the Head, this part is only worth looking at for its EX skill, which is an Awakening Skill that boosts Shot ATK by 19%, but more importantly, makes you harder to target while it's active. Another Supporter piece, this helps them stay alive by being targeted less. Like the Head, if you don't plan to use these on a Supporter specifically designed to be a healbot, skip these.

Ah, the Blitz Legs. This part and I have a history. There was a time I thought these were the best in slot for Shooters, and are the only part I regret wasting Awakening Circuits on. High defenses, average ATK stats, High Mobility and Mid-Range tags and a trait that boosts Shooting Crit Rate by 17% when using a Speed Attribute suit. So, the story is, at the time I thought Crit worked like it does in regular video games. The standard of double damage on a crit, which meant that a 17% increase in Crit Chance on average would equal a 17% boost in damage. Well, it was then found out that not only do EX Skills not crit, which immediately neutered any Crit builds, but Crits only did 10% extra damage instead of 100% extra damage, making the trait a 1.7% boost in damage on average instead. That makes these legs pretty awful outside of their defenses. Another aesthetic piece though.

The Back has the same stats and word tags as the Legs, minus swapped RES stats. The trait on this one is a 15% chance to prevent Vernier Consumption, a very low impact trait. Skip unless it's for style purposes or you want the higher defenses and word tags for a supporter.

So yeah, the Blitz really didn't age well, which is a shame because like the Kabakali, it looks great! Anyways, I hope you guys have enjoyed this week's article, I'll see you all next week. In the meantime, you can find me over at the Gamepress GBGW Discord server, at https://discord.gg/YUU84d

Gundam and Gunpla Enthusiast. Can be found occasionally writing articles or pouring over spreadsheets while scratching my head.