Join our GNL Discord Server for latest information and to chat, discuss, and answer each others' questions!

Tap-hold down on the Parts’ icon/text in any menu to open its full page description displaying important information.

To lock/unlock the player’s favourite Parts, find a toggle-able star icon at the top right corner in the full page description (auto-locking ☆4/5 Parts when obtained is available in Options; turned on by default).

A number that indicates the Gunpla’s overall performance of all the equipped Parts. Having a high CPWR as the Player's Gunpla in Missions can be utilized to find others' Relief Gunplas with similar CPWR values.

Tap on the Max Value button to toggle between the current / Tune-Upped & Upgraded / Equipped Marks state of the Part. This is an incredibly useful function for comparing between different Parts’ maximum values on Parameters, EX Skills and Part Traits to determine which one is more suited for the player's needs.

Part Trait and EX Skill Lvl thresholds do not depend on Rarity.

Cost remains proportional to Rarity regardless of its base Rarity:

Other than Story Missions, going over Squad Cost will cause significant Armor reduction (50% -> 10% -> 1 Armor). Squad Cost limit is raised alongside with Player Level and its problem slowly becomes negligible as you reach a higher Player Level.

When using five or more Parts of the same Attribute are equipped on a single Gunpla, either P/T/S letter will appear next to its name that indicates its type of Attribute: Power, Technique, Speed or None. Equipping additional Parts with the same Attribute beyond five Parts will not grant additional bonuses, hence the remaining four slots of Parts can be more freely chosen by the player. If any of P/T/S Parts does not reach a tally of five, the Gunpla will have no attribute which consequently does not gain any bonuses or weaknesses. The player’s targeting cursor will turn Blue for Attribute advantage, Red for disadvantage, and White for neutral: 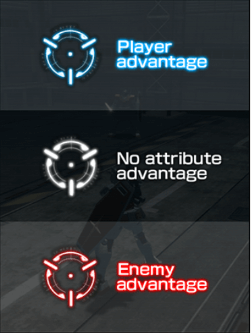 Attribute advantage should be utilized against powerful enemies and adds another layer of strategy for the players to consider in Missions. Keep in mind that Attributes are an important factor to activate certain Part Traits as well.

A numerical indicators of the base performance of Gunpla Parts and AI Pilots. ATK values directly increases the damage potential with all attacks while other defensive DEF & RES values reduces damage taken against attacks. Different types of Parts prioritizes different categories of Parameters, with some Parts often deviating from these conventions:

Remember that Parts' Level/EX Skill/Part Trait EXP does not transfer over when used as material.

An important aspect of Gunpla Building in correlation with Part Traits. There are currently 8 different Categories of EX Skills:

Some of the attacking EX Skills are used very differently from their prescribed Categories such as:
- [Aegis Gundam Shield]’s ‘Shield Throw’ being labelled as Physical-Melee EX Skill that throws the shield at the targeted enemy
- [Gundam Beam Rifle]’s ‘Last Shooting’ labelled as Beam-Shot EX Skill which requires to connect its initial melee hit to trigger its full attack
- [Mobile SUMO Gold Arms]’s ‘IF Bunker’ as Beam-Shot that combos both a range & melee attack in a single use

The game currently has a special, unlabeled Category of EX Skills that is identifiable for its brief freeze-frames and stylistic camera movements (Last Shooting, Iron Impact, Palma Flocina, Max Output Buster Rifle etc). These special EX Skills, where the community dubbed them as "cinematic", "hissatsu", "cutscene" EX Skills, are responsible for having the strongest and flashiest attacks in the game.
Spec-wise they're identifiable with: long invincibility frames, high Pierce/Power values, powerful Secondary Effects and long initial & after-use cooldowns.

There are two types of cinematic EX Skills, mainly divided between Melee-types and Range-types:

- Cinematic melee EX Skills have the 'dashing' scene immediately after use and must connect its hit on one target to fully initiate its attack animation. Due to these limitations, the attack can be canceled by an obstacle, hit the wrong target or simply be out of range.

- Cinematic range EX Skills goes into action immediately after use and is considerably more successful in hitting the target, often with a channeling / splash attack. To balance out its incredible tracking ability, they generally have low Power, high Pierce value to maintain the game balance.

These are some descriptions on EX Skill, Pierce and Power sourced from the in-game glossary:

According to these descriptions, attacking with EX Skills does not calculate the enemies' DEF Parameter values. However, multiple observations from the community have indicated that DEF values does fluctuate the EX Skills’ damage output, albeit not as effective as RES values.

The continuing theory on the exact operations of Pierce & Power is how they operate on a percentile-based increases in their effects, initially hinted by [EX Skill Pierce/Power boosted XX%] Part Traits’ numerical indications of said boosts.

Therefore, it is speculated that each increment of Pierce & Power grades’ should increase their potency in direct %:

These grades are only the rounded milestones of total % of the Pierce/Power values, and the actual numbers can change behind the scenes with Upgrading without changing the grades.

Buff EX Skills are known to stack with other Buff EX Skills to achieve an outstanding increase in Parameters. However, stacking Buff EX Skills with the same name and grade does not work when stacked by the same player, but does stack between two or more players:

The EX Skills that comes with Secondary-Effects (GN Claw, Melee Pick, Transarm Raid etc) are known to stack with other Secondary-Effects and Buff EX Skills. They generally have a hidden duration of 10 seconds which can be increased by one second per EX Skill Level. The 'cinematic' EX Skills have a base timer of 20 seconds and also increases by one second per EX Skill Level. These timers do not interfere with each other and their effects will end when the timer ends individually.

The more powerful EX Skills typically have longer cooldowns, providing a greater potential on the player’s control, but powerful EX Skills are often not very efficient on the hands of auto-controls for their unsparing uses of EX Skills. Equip a balanced range of EX Skills with short/long/clip-based cooldowns while considering whom and how they will be used.

Part Traits are passive bonuses that are activated during combat when their conditions are fulfilled. Ideally, having six Part Traits on a Gunpla is the most optimal build with the remaining three on EX Skills, but building a Gunpla with practical Part Traits is an already difficult task with a complex progress of mix and matching of Parts; a feat only achievable with a huge collection. Focus on particularly potent Part Traits for the builds to balance out the Gunplas’ Parameters and the EX Skills.

Have a read through the GBGW Guide article dedicated in clarifying between different effects of Part Traits to know which ones are the best for particular builds.

Word Tags are passive bonuses that increases the Gunpla’s Parameters in direct % and is immediately reflected in the Parameters during Gunpla Build. Word Tags are activated after collecting five Parts with identical Word Tag names and does not grant additional bonuses for equipping beyond five.

The only exception for collecting more than five is with the ‘For…’ Word Tags where it provides 1% boost to every Parameters on all the Parts with the same Word Tag. This potentially means that all 9 Parts on a Gunpla can gain that 1 % boost. The effect increases from 1% to 3% boost when the Gunpla is deployed to the corresponding stage in Mission.

Marks are items that can be attached to Gunpla Parts to enhance their Paramenters. Refer to this dedicated GBGW article in clarifying how to get and manage these Marks.

Every AI Pilot comes with one unique Job License other than the All-Rounder with unique abilities and Parameter bonuses. Job Licenses can be chosen at the Gunpla-Build interface, underneath the CPWR indicator. Visit the Tutorial Missions to practice through each Job Licenses’ specialities.

Please refer to the GBGW Guide article dedicated in clarifying between different effects of Job Licenses.

Short/Mid/Long-Range determines the AI pattern only when the AI Pilot is set to All-Rounder Job License. Pay attention to Solo/Balanced/Support roles as it determines how the AI pattern decides on which enemy to target with its allies: Solo prefers attacking other unengaged enemies, Support prefers targeting the same enemies as teammates while Balanced is the middle ground between Solo and Support that seems to prefer targeting the closest enemy.

Go into any category and look for yellow-highlighted download symbols. Each symbol is indicating a full collection of Parts of that specific Gunpla which in turn unlocks its Paint set, Emblems and Glows when available. Alternatively, bulk collect all the Collection rewards with the blue-highlighted download symbol at the bottom-right from the list’s UI. The Collection progress is permanently recorded after obtaining a Part, so don't worry about loss in its progress.