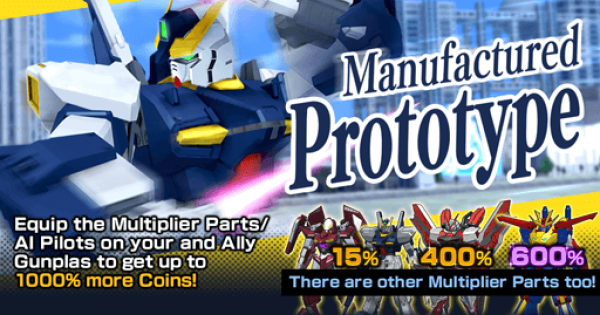 Hello Pilots! This week has been brutal for me, hence the delay on this article. It's made worse by the fact that this week's event suit has a metric ton of parts, coming with *three* different ranged weapons for some ungodly reason. On top of that, we also have a new Arena suit having debuted this week, so that needs to be reviewed too. With all that being said, let's get on with the show!

Not a strong start for our suit this week. We have average Melee ATK at 291, slightly above average Shot ATK at 1701. The rest of the stats are really not worth talking about, and the word tags are Gundam Type and For Computers. Finally, it comes with a Buff Skill that boosts your squad's Shot Defense by 39%. This head is trash. There's very little reason to ever use it over the Artemis Head, especially when the best thing about it, the Buff skill, is incredibly low value given how ATK is worth so much more in the damage formula. Hard pass.

A huge 1433 Armor, average melee ATK at 291, above average Shot ATK at 558, alongside the Gundam Type and For Computer word tags, this part comes with a trait to boost Debuff Skill Time by 16% when Gundam Type is active. The trait is worthless, but the Armor and Gundam Type make a strong combo for a tank suit, and 558 Shot ATK is solid enough to use over most random 4* Torsos on a Shooter. Grab a copy if you don't have something better in this slot for shooters, otherwise skip.

A very low 558 Melee ATK, an above average Shot ATK of 558, and average defenses, these come with the Gundam Type and For Urban Area word tags, and a familiar EX Skill. Offense Up (A) boosts your Melee and Shot ATK by 39%, which is the skill that made the Tallgeese II Head so powerful in the old Arena days. This is a worse slot for the skill to be in, but it's still something to have on hand just in case, and especially if you missed out on the Tallgeese II Head. Grab this and enough copies to max it out, just in case Buffs ever become meta again.

Distinctly average stats across the board, Gundam Type and For Urban Area word tags, and a trait that raises Mid Shot ATK by 14% when Speed attribute. This trait is really rough, being range specific, and nothing else about these legs really stand out either. Hard pass.

This back is, as is tradition, just the legs. Same stats and word tags. The difference here is a fun little melee EX Skill with B+ power. It has a dash and is a mini cinematic, but it is a bit too long of an animation to be properly viable in Arena. Still, if you need a good melee EX Skill for regular missions, this is a decent one to get.

Low ATK, Gundam Type and For Computer word tags and a trait that increases initial CD charge by 12% while For Computers is active. This is a great trait tied to a terrible word tag, and held back further by the bad stats on the weapon. Melee users won't want this because of how low the ATK is, so it's pretty much intended for Shooters...except For Computer has only outright bad or distinctly average parts available to it so far, meaning any Shooter trying to take advantage of this will be gimping themselves to do so. Pick it up and max it out in case we get good Shooter For Computer parts, but don't expect that to be anytime soon.

Average Shot ATK for a 3*, which is to say low in general, Gundam Type and For Computer word tags, and a trait that boosts Job Gauge by 13% when Speed attribute. Hard pass.

Same stats and word tags as the Beam Rifle but with a different trait. The trait increases your reload speed by 15%...but it only works for this one gun since it takes up the slot that you would put a better gun in, making this a terrible weapon. Skip.

Did we *really* need three different garbage weapons for the same slot? Apparently. Same stats as the other two, this rifle swaps For Computers with For Urban Area, and the trait increases Sp. Shot power by 25% while your Armor is at 60% or more. Strong boost for a bad attack type, coupled with bad stats and word tags? Yeah no.

I know I typically don't talk about stats on shields, cause they're almost all pure defense, but even then this is low stats. Gundam Type and For Urban Area word tags, and rounded out by a part trait that reduces shooting damage taken by a flat 20 when using a Middle-Shooter pilot. So we have low stats, bad tags and a bad trait? No thank you.

I feel bad for MK-II fans, cause this kit is about as awful as the MG real life version of this kit is. Well, with that garbage fire done with, let's look at the new Arena suit.

High Armor, average Melee ATK, low Shot ATK, For Space and Heavy Armor word tags, and a trait that boosts Mid Shot ATK by 14% while For Space is active. How many different ways can I say "Pass" in one article?

High Armor, average ATK stats, For Space and Heavy Armor word tags, and a Magazine Skill with decent stats. It's not a great skill, and definitely isn't replacing the higher end ones like the Crossbone X1 Torso, but if you have nothing else it's serviceable.

Low Melee ATK, average Shot ATK, For Space and Heavy Armor word tags, and a Magazine Skill with decent stats. Like the Torso, it's not a great Mag Skill, but it's better than the Torso by a small amount.

Average stats across the board, For Space and Ace Exclusive word tags, and a trait that reduces shot spread by 15% when using a Middle Shooter pilot. The only thing these have going for them is the Ace Exclusive tag, tbh.

Legs stats with swapped RES, same tags, and a trait that increases Vernier recovery rate by 16% when Power attribute. So like the legs, the only thing this has going for it is the Ace Exclusive tag.

High defenses, very low Shot ATK, For Space and Ace Exclusive word tags, and the same trait we saw on the Build Mk II Hyper Bazooka. So a worthless trait on a worthless gun, the one and only possible saving grace here is if you have no use for the gun slot on your melee suit and just want defense. But there's enough good guns and Initial CD and word tags are usually worth way more than pure defense stats. Hardest of hard passes.

Average defenses, low ATK stats, Mid-Range and For Space word tags, and a trait that reduces enemy shooting power by 25% when Power attribute. Soma has terrible stats and word tags, but the trait is very powerful and so it might be worth maybe keeping an eye out on her if that's something you want to try and capitalize on.

Well, the Tieran Toazi is very reminiscent of the Strike Rouge that just left the Arena shop. Namely, it's pretty bad overall. This has been quite the sad week for event parts. Hopefully our next Arena suit is good, and hopefully next week's event suit is better than the dumpster we were given this week. I'll see you all later.